Why So Slow? A Gradual Return for Interest Rates

Short-term interest rates in the United States have been very low since the financial crisis. Projections of the natural rate of interest indicate that a gradual return of short-term interest rates to normal over the next five years is consistent with promoting maximum employment and stable inflation. Uncertainty about the natural rate that is most consistent with an economy at its full potential suggests that the pace of normalization may be even more gradual than implied by these projections.

To boost economic growth during the financial crisis, the Federal Reserve aggressively cut the target for its benchmark short-term interest rate, known as the federal funds rate, to near zero around the beginning of 2009. Since then the time projected for the rate to return to more normal historical levels has been continually postponed.

To understand the level of the federal funds rate and when it might be normalized it is useful to consider the concept of the natural rate of interest first proposed by Wicksell in 1898 and introduced into modern macroeconomic models by Woodford (2003). The natural rate of interest is the real, or inflation-adjusted, interest rate that is consistent with an economy at full employment and with stable inflation. If the real interest rate is above (below) the natural rate then monetary conditions are tight (loose) and are likely to lead to underutilization (overutilization) of resources and inflation below (above) its target.

This Economic Letter analyzes the recent behavior of the natural rate using an empirical macroeconomic model. The results suggest that the natural rate is currently very low by historical standards. Because of this, monetary conditions remain relatively tight despite the near-zero federal funds rate, which in turn is keeping economic activity below potential and inflation below target. The model projections for the natural rate are consistent with the federal funds rate only gradually returning to normal over the next few years, although substantial uncertainty surrounds this forecast.

The natural rate of interest in an empirical macroeconomic model

The natural rate of interest can’t be directly observed because it refers to a hypothetical state of the economy. To measure the natural rate, I use a structural model described in Cúrdia et al. (2015) and incorporate the effects of forward guidance—monetary policy announcements about what path the interest rate is likely to follow. Including this has the advantage of generating forecasts that account for the zero lower bound of the federal funds rate.

In this model, the natural rate of interest is the inflation-adjusted rate that would prevail after prices and wages adjust to push economic activity to its most efficient level making full use of the resources available, also known as the potential level of output. Inflationary pressures in the model depend on how well economic resources are used and on a cost-push shock—an event, like an oil shock, that pushes economic activity down and inflation up. In the model the degree of resource utilization is measured by the output gap, the difference between the current level of economic output and its potential. Without cost-push shocks, there are no inflationary pressures if the output gap is zero. However, inflationary pressures build up when resources are being overutilized and the output gap is positive.

Measuring the natural rate of interest

I use data from 1987 through the third quarter of 2015 to estimate the natural rate since the most recent recession and then project it through 2020, shown in Figure 1. The blue line is the median percent estimate at an annual rate. The shaded areas represent the 70% (darker) and 90% (lighter) probability ranges of possible estimates. The vertical gray bar shows the Great Recession according to the National Bureau of Economic Research. 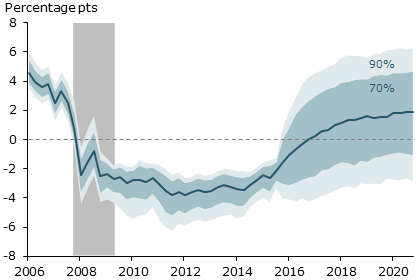 The natural rate of interest and monetary conditions 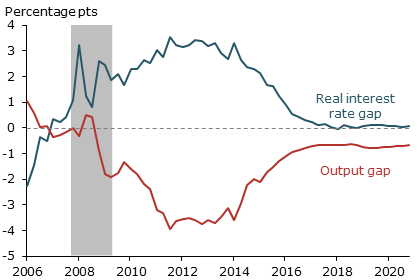 The large decline in the natural interest rate early in the recession (shown in Figure 1) may explain why the Federal Reserve lowered the federal funds rate so fast in 2008 even before the output gap became negative. Interest rate rules that ignore the variation of the natural rate over time—like the one proposed in Taylor (1993)—would not prescribe dropping the federal funds rate so quickly, which would lead to even tighter monetary conditions and a more negative output gap. Therefore, while monetary policy was accommodative relative to the Taylor rule, it was not accommodative enough to prevent the interest rate gap from increasing and output from falling below potential, as shown in Figure 2.

This model projects that, based on historical relationships, the future interest rate will return to normal too quickly, leading to persistently underutilized resources and output below potential even after the interest rate gap closes.

My estimates are qualitatively similar to Del Negro et al. (2015), who also find a negative natural rate and a gradual normalization to long-run levels. Williams (2015) estimates the natural rate to be low by historical standards, but not nearly as low as those shown in Figure 1. The main difference is that Williams uses the statistical model of Laubach and Williams (2003), which is better suited to determine the longer-run level of the natural rate. By contrast, my analysis is suited to find short-term fluctuations in the natural rate.

This distinction is important in evaluating monetary conditions. In contrast to my results, the interest rate gap using the Laubach-Williams measure of the natural rate has been negative since the recession. According to their estimate, the Fed response to the crisis was expansionary because it lowered the real interest rate below its longer-run natural level. However, since the nominal interest rate could not fall below zero, the Fed was unable to lower the real rate relative to the short-run natural level. This is consistent with the positive interest rate gap from my findings, depicted in Figure 2.

A second possibility is that the natural rate may return to its long-run level more gradually than my analysis implies. To investigate this possibility further, I apply my model to real-time data estimates of the natural rate. The thick solid blue line in Figure 3 shows the median estimate using all the data available as of the third quarter of 2015. The thinner gray solid line shows the projection using the data available as of the last quarter of 2006, before the financial crisis. The dashed lines correspond to projections using the data available at the end of 2008 (gold), 2010 (green), and 2012 (red). 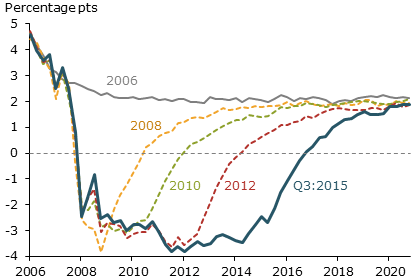 The results mean that since the recession my model has consistently underestimated how long it would take for the natural rate to start returning to its long-run historical level. A sequence of unexpected negative shocks to the economy and lingering pressures from the financial crises may mean the model’s projections of the natural rate need to be adjusted. This evidence suggests that interest rates may remain low longer than what this model currently projects. Indeed, Hamilton et al. (2015) note that uncertainty about the natural rate of interest “argues for more ‘inertial’ monetary policy than implied by standard versions of the Taylor rule.”

This Letter suggests that the natural rate of interest is expected to remain below its long-run level for some time. This implies that low interest rates over the next few years are consistent with the most efficient use of resources and stable inflation. The analysis also finds that the output gap is expected to remain negative even after the natural rate is close to its long-run level. Additionally, there is considerable uncertainty about both the short-run dynamics as well as what level should be expected in the longer run. All these considerations reinforce the possibility that interest rate normalization will be very gradual.