Can We Rely on Market-Based Inflation Forecasts?

A substantial decline in market-based measures of inflation expectations has raised concerns about low future inflation. An important question to address is whether these measures contain information that can improve upon alternative forecasting methods. This analysis finds that market-based inflation forecasts generally are no more accurate than surveys of professional forecasters or simple forecast rules. This suggests that financial markets can provide little additional useful forward-looking information about inflation.

Correction: This Letter has been revised to incorporate into the analysis the indexation lag of inflation swap contracts. Figure 2 has been revised accordingly. An Addendum describes the changes in detail and includes additional results. The changes reflect a somewhat revised conclusion that market-based surveys cannot improve upon some of the most common methods for predicting inflation.

The Federal Reserve’s dual mandate requires monetary policy to aim for both maximum employment and price stability. Although employment has recovered since the recession, inflation has consistently remained below the Fed’s 2% longer-run objective. Because expectations of future inflation play an important role in determining current inflation, decreases in measures of inflation expectations based on market prices have raised some concerns. For example, between June 2014 and January 2015, one-year inflation swap rates, which measure market-based expectations of inflation in the consumer price index (CPI) one year ahead, dropped over 2.5 percentage points. Large decreases were also observed in breakeven inflation rates, the difference between yields on nominal and inflation-indexed Treasury securities, known as TIPS.

Market-based measures of inflation expectations are calculated from the prices of financial securities. Their advantage is that they are readily available at high frequency and therefore are widely monitored. However, they reflect not only the public’s inflation expectations but also other idiosyncratic factors that affect market prices, which are difficult to quantify. For example, they include a risk premium to compensate investors for inflation uncertainty and are affected by changes in liquidity, unusual demand flows, and, more broadly, “animal spirits” that change prices but are unrelated to expectations (see Bauer and Rudebusch 2015). Hence it is unclear how much useful information they provide, and how much one should pay attention to these rates when forecasting inflation.

If market-based inflation expectations provided accurate inflation forecasts, then one surely would want to pay close attention to their evolution. In this Economic Letter, we evaluate their performance in comparison with a variety of alternative forecasts for CPI inflation.

There are two types of market-based measures that one can use to gauge inflation expectations: TIPS breakeven inflation rates and inflation swap rates. Both of these reflect market-based expectations for future headline CPI inflation that includes food and energy prices. TIPS breakeven inflation rates are reliable only at longer maturities, such as five- and ten-year horizons. Since TIPS only started trading more broadly in the early 2000s, there simply are not enough data to analyze the forecast accuracy of these rates.

In contrast, inflation swap rates are consistently available for all annual horizons from one to ten years. Moreover, these inflation swap contracts are quite liquid and transparent (see Fleming and Sporn 2013) and therefore might be expected to contain useful information about future inflation. In our exercise we focus on the one-year and two-year horizons, since these are most relevant for practical inflation forecasting. Though inflation swaps were introduced somewhat later, in the mid-2000s, focusing on short horizons of one and two years gives us a large enough sample to form at least some tentative conclusions about their forecast accuracy.

Figure 1 shows the evolution of one- and two-year inflation swap rates, and five- and ten-year TIPS breakeven inflation rates since the beginning of 2013. The declines in the second half of 2014 were quite dramatic and visible, to different extents, in all four series. Notably, these measures have again declined quite substantially more recently, and the ten-year TIPS breakeven rate has reached its lowest level since 2009.

We construct market-based inflation forecasts from one-year and two-year inflation swap rates. While one can try to account for risk premiums and extract actual inflation expectations from market prices—for example, by using models as in Christensen, Lopez, and Rudebusch (2010)—we use raw, unadjusted market rates. In this way our results are not dependent on the choice of a specific model, and are based on measures of inflation expectations that are available to any market participant and professional forecaster.

Our market-based forecast for the one-year horizon is based on the yield on the one-year inflation swap contract, while for the two-year-ahead forecast we use the one-to-two-year forward rate, which corresponds to the forecast from one to two years in the future and is calculated from the one-year and two-year swap yields. Inflation swap contracts feature an “indexation lag,” which means that the relevant inflation horizon is shifted a few months into the past. We account for this in the construction of the market-based forecast and in the calculation of future realized inflation—for details please refer to the online Addendum.

We compare the market-based inflation predictions with four other forecasts that are based on surveys or current inflation rates or use a simple constant corresponding to the Fed’s inflation target.

For the survey-based forecasts we use data from the Survey of Professional Forecasters (SPF) and the Blue Chip Financial Forecasts. Surveys are an important benchmark when comparing inflation forecasts. These predictions are made by professional forecasters who aim to appropriately incorporate all information available. Past research has shown that survey forecasts tend to perform best among different competing inflation forecasting methods (see Ang, Bekaert, and Wei 2007 and Faust and Wright 2013). Forecasts from the SPF are based on median predictions of headline CPI inflation one year into the future from the end of the fourth quarter, which we transform into forecasts with the appropriate forecast horizon by taking weighted averages. Similarly, for the Blue Chip forecasts comparison we construct a weighted average of the annual predictions, based on the quarter in which the prediction was made. Due to the limited horizon of the Blue Chip survey forecast, we can only construct one-year forecasts. Note that the horizons for which we can construct forecasts from survey expectations do not exactly correspond to the horizons for the inflation swaps, due to the aforementioned indexation lag.

In addition to the survey forecasts, we use no-change forecasts based on current inflation. Because inflation is a highly persistent time series, current values are closely related to past values, which justifies a simple no-change forecast. We use as our forecast the core CPI inflation rate from the previous month, which is released in the middle of the current month. Core inflation excludes the volatile prices of food and energy goods and therefore is generally more informative about the true underlying inflation rate in the economy than the headline inflation number.

Our last comparison uses a simple constant inflation rate motivated by the fact that the Federal Reserve targets a constant 2% inflation rate over the long run. This target is based on the price index for personal consumption expenditures (PCE). To convert this for our comparison, we use the average spread between PCE and CPI inflation over recent years, which is 0.3 percentage point, and hence forecast a CPI inflation rate of 2.3% (see Bauer and Christensen 2014).

We use an identical sample period and frequency for all forecasts. The frequency is quarterly, since the SPF is available only at the quarterly frequency. To correctly line up all the forecasts, we use the end of the first month of each quarter as the relevant forecasting date, since that is when the survey respondents submit their forecasts for the SPF. The series of forecasts starts in July 2005 and goes through July 2013, and the most recent inflation data used in the forecast exercise is from July 2015. The swap-based and simple (no-change and constant) forecasts are compared to future realizations of inflation over the exact horizon relevant for the inflation swap contracts. The horizon for the survey forecasts, on the other hand, is simply the one-year inflation rate one and two years into the future, which is a small caveat to their comparability. 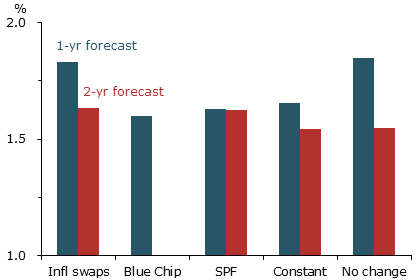 For the one-year-ahead forecasts, the results indicate that market-based forecasts and the no-change forecast perform worst. Survey forecasts deliver the best performance. The constant forecast performs surprisingly well, with only slightly lower accuracy than the surveys.

For the two-year forecasts, Figure 2 shows that while the differences in forecast performance are smaller, market-based forecasts again are among the least accurate. Here, inflation swaps and the SPF perform about the same, both somewhat worse than the simple constant and no-change forecasts.

To assess the robustness of these findings, we carry out additional analysis and report the results in the online Addendum. There we consider a monthly sample frequency, an additional simple forecast rule, and an alternative measure of forecast accuracy. Furthermore, we also analyze two separate subsamples—the first and the second half of our sample period, respectively—to check whether our results might have been driven by observations over a specific time period. Our robustness analysis shows that, while the differences in forecast accuracy are quite small and can be somewhat sensitive to the details of the forecast exercise, market-based forecasts are generally among the least accurate forecast methods. Moreover, our results are also quite stable across subsample periods, which suggests that they were not driven by a particular episode, such as the Great Recession or the subsequent recovery.

We can get a better understanding of the performance of the different forecasts by visualizing them over time. Figure 3 compares the one-year-ahead forecasts for the five different methods with the actual headline CPI inflation reported a year later. The forecasts are aligned with the reported inflation rate so that a perfectly accurate forecast would lie on top of the line for actual CPI inflation. The figure illustrates that market-based forecasts are off target mainly because they tend to be highly correlated with past inflation. It appears that market participants take a very strong signal from current inflation when forming expectations of future inflation, that is, they appear to simply extrapolate from the current headline rates. This is consistent with Faust and Wright (2013) who note that “while these short-term inflation swap rates may be telling us something about near-term inflation expectations, they appear to move almost in lockstep with past inflation.” Unexpected shocks to inflation caused sizable errors in all forecasts except for the constant, which appears to be the main reason for its good performance. 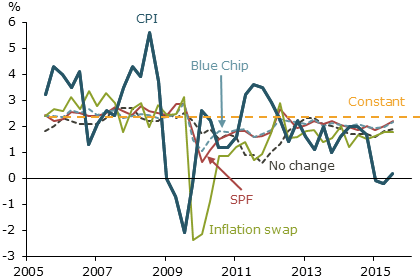 We find that market-based inflation expectations are not as accurate in predicting future inflation as one might expect. They can exhibit somewhat lower accuracy than forecasts constructed from survey expectations of future inflation, which incorporate all the information used by professional forecasters, or simple forecast rules. Interestingly, a simple constant inflation rate corresponding to the Federal Reserve’s 2% inflation target performs quite well. Our results should be viewed as only tentative as they are based on a short sample that displays a lot of volatility during the Great Recession, and because the differences in forecast accuracy are generally small. What we confidently conclude, however, is that market-based forecasts cannot improve upon some of the most common methods for predicting inflation.

Erin McCarthy is a research associate in the Economic Research Department of the Federal Reserve Bank of San Francisco.