How Important Is Information from FOMC Minutes?

To foster transparency and accountability in monetary policy, the Federal Open Market Committee publishes a statement immediately following every FOMC meeting, followed by the full minutes of the meeting three weeks later. Evidence suggests the release of the minutes can have a sizable impact on Treasury bond yields. The impacts are largest when the tone of the minutes differs from the tone of the statement. This presumably leads markets to change their expectations of future monetary policy.

The Federal Open Market Committee (FOMC) provides direct insight through their communication after their meetings. In particular, the Committee releases a statement at the end of each of their eight regular meetings during the year. Three weeks later, the Fed publishes the minutes of that meeting. The statement is agreed upon by a majority of the voting members of the committee and outlines the Committee’s view on current and prospective economic conditions and appropriate monetary policy actions. The minutes, on the other hand, provide a general overview of the discussion at the meeting.

Research has shown that the statements often have a large impact on asset prices and the public’s perceptions of the FOMC’s monetary policy stance. In this Economic Letter, we consider whether the minutes have similar effects and whether the magnitude of those effects depends on how much the minutes differ in tone from the corresponding statement. In particular, we consider whether a divergence in tone between the minutes and the statement influences market and public expectations of future monetary policy.

We address these questions by looking at the impact of FOMC communications on Treasury bond yields and assess whether a given statement-minutes pair differs in tone using two alternative semantic-based measures of Fed communication: sentiment scores from Prattle Analytics LLC and a news article score index. We find that differences in tone are associated, on average, with larger changes in Treasury yields.

On the final day of each FOMC meeting, the Committee releases a statement regarding its policy decision. Since 2004, the minutes have been released exactly three weeks later, summarizing significant policy issues addressed and all decisions made by meeting participants.

Markets closely follow the releases of FOMC communications both to learn about the Fed’s decision and to glean insights into possible outcomes of upcoming meetings (Rosa 2013, Hsu, Carvalho, and Nechio 2016a,b). Markets ultimately price their understanding of Fed communications into Treasury bond yields, among other assets. Changes in yields affect borrowing costs for businesses and households and constitute a key transmission mechanism of monetary policy.

Figure 1 reports the changes in Treasury yields on days of statement and minutes releases from January 2009 to June 2016. In particular, the figure shows the average absolute value of changes in 2-, 5- and 10-year Treasury yields from the beginning to the end of the release day. We focus on the post-2008 period because in this period the Fed’s target interest rate was near its zero lower bound and Fed communications took on extra importance (Federal Reserve 2016). 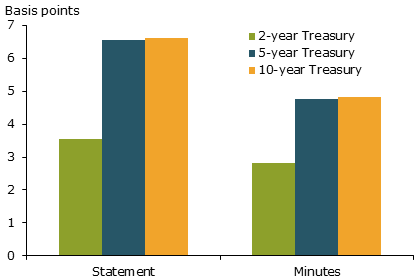 Measuring the tone of FOMC communications

Researchers and market participants have developed methods to quantify the tone of FOMC communications. This yields a score for each type of communication indicating the degree of hawkishness, suggestive of a tight monetary policy stance, versus dovishness, suggestive of a looser stance. Examples of these efforts include Carvalho, Hsu, and Nechio (2016a,b) and Prattle.

Carvalho, Hsu, and Nechio (2016a) use a semantic-based measure of communication, the Factiva Semantic Orientation (FSO), which quantifies the content of Fed communications from news articles. This measure first collects from the Factiva database all news articles (in English) containing the words “Fed,” “Federal Reserve,” or “FOMC” in the headline that appeared the day before, the day of, and the day after the communication. From these articles, they select all sentences containing at least one of the following words: rate, policy, statement, announcement, Fed, FOMC, and Federal Reserve. They then count the number of times the words “hawkish” and “dovish” appear in the selected sentences. The raw index is the ratio of the number of hawkish to dovish mentions. Next, they measure the “surprises FSO”—that is, the degree of hawkishness or dovishness beyond what was already expected by market participants—measured as the change in the FSO over the interval from the time of the announcement to the end of the following day relative to the FSO over the interval from the start of the day before up to the time of announcement. A positive surprise FSO score suggests that the communication was interpreted as more hawkish than expected (for details, see Carvalho, Hsu, and Nechio 2016b).

We rank post-2008 meetings based on the measured tone difference for each measure and split them into four equal bins. The lowest bins identify the set of meetings in which the tone of the minutes and the statement are most similar, while the highest bins identify the least similar tones. For the minutes release dates within each bin, we then calculate the average absolute value of daily changes in Treasury yields. Henceforth, we focus on changes in 5-year Treasury yields, but results are qualitatively similar using either the 2-year or 10-year maturities.

Figure 2 shows the results for the lowest and highest bins. Blue bars report changes to Treasury yields on minutes release dates with the most similar tones between statements and minutes, while red bars correspond to dates with the least similar tones. The left-hand group uses Prattle scores, while the right-hand group uses FSO scores. For both measures, we see that larger differences in tone are associated with larger impacts on yields.

Figure 2
Yield effects when statements and minutes differ in tone 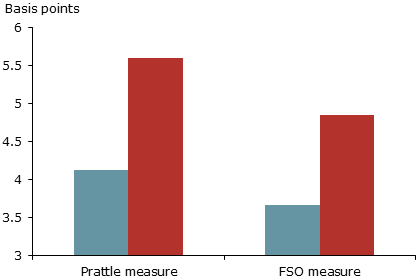 Note: Results for each measure show the average absolute value of daily changes in 5-year Treasury yields when meeting statements and minutes had the most and least similar tones.
Source: Prattle, Federal Reserve Board, and authors’ calculations.

So far we have focused on how similar or dissimilar a given meeting’s statement and minutes are and related that to the magnitude of market reactions to the minutes. A natural next question would be whether minutes that were particularly hawkish relative to the corresponding statement tend to move the market in a hawkish direction, for example toward higher Treasury bond yields. Similarly, do minutes that were more dovish than their corresponding statement drive down bond yields? To address these questions, we rerank the same set of FOMC minutes release dates based on the difference in tone between statement and minutes. Again, we split them into four bins, with the lowest bins containing release dates in which the minutes were the most dovish relative to the statement and the highest bins containing release dates in which the minutes were the most hawkish relative to the statement. We then calculate the average change in the raw value of Treasury yields. We do this exercise using Prattle and FSO scores separately to measure tone.

Figure 3 shows the average change in yields for bins based on Prattle scores (left-hand group) and FSO scores (right-hand group). Blue bars report changes to Treasury yields for minutes release dates when the tone was the most dovish relative to the statements, and the red bars correspond to dates when the tone was the most hawkish relative to the statements. In both cases, minutes that were perceived as especially hawkish relative to their corresponding statement led to sizable increases in the 5-year Treasury yield. For the most dovish releases, the Treasury yield change was either negative or close to zero. The positive, albeit small, response for the bottom Prattle group is a bit surprising. However, the Prattle scores measure the tone of the language in the minutes (statements) relative to the average tone of other minutes (statements), not necessarily the tone relative to market expectations. Over the period 2009–2016, it is possible that the minutes tended to surprise the market on the hawkish side, albeit sometimes to a larger degree and sometimes to a smaller degree.

Figure 3
Changes in yields associated with the tone of minutes 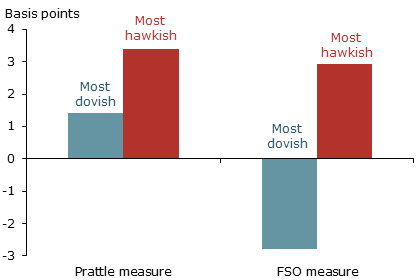 Note: Results for each measure show the average daily change in 5‑year Treasury yields when the tone of the meeting minutes relative to the statement was the most dovish and hawkish.
Source: Prattle, Federal Reserve Board, and authors’ calculations.

The different conclusions based on these two measures is not all that surprising. Although they score the same set of communications, their methodology differs substantially, as does the set of dates that yield the largest differences in hawkish and dovish tones. Regardless of these differences, however, both measures suggest that, when the tones of minutes and statements diverge, Treasury yields are affected.

Financial market responses to Fed communication are important ingredients to the transmission mechanism of monetary policy. Fed communication became particularly important during the period when the Fed had little room to move its policy rate and thus used communication to shape expectations about future policy. In that environment, it is important to assess whether different types of communication affect market interest rates. Our findings suggest that FOMC minutes releases can have sizable impacts on Treasury bond yields. The impacts are largest when the tone of the minutes differs greatly from the tone of the statement, presumably leading markets to change their expectations of future monetary policy.