After the onset of the global financial crisis, the Federal Reserve had to rely on other tools—including communication—to work around the constraints of being unable to lower the federal funds rate below zero. One way to assess how effective these communications were is by estimating how interest rates on bonds with different maturities reacted to Fed communications before and after the zero-bound period. A measure based on news reports of Fed communications suggests that this tool gave the Fed some ability to affect long-term yields through its communications.

From 2008 through late 2015, the Federal Reserve kept its policy rate, the federal funds rate, at essentially its lower bound near zero. The zero lower bound (ZLB) on interest rates—which states that interest rates usually cannot be negative—is often regarded as an important constraint on the ability of central banks to conduct monetary policy. Indeed, if changing the policy rate were the only tool available to the monetary authority, hitting the zero bound would hamper its power to stimulate economic growth through lowering the rate.

During the time of near-zero rates, however, the Fed frequently used so-called unconventional monetary policies, such as large-scale asset purchases and active use of communication to shape expectations about future interest rate policy. If these unconventional policies proved effective as a substitute for changes to the policy rate, using them would alleviate the constraints of the lower bound on policy.

In this Economic Letter, we focus on the use of communication as a policy tool to evaluate how much the zero bound constrained the Fed’s ability to conduct monetary policy. We do so by constructing a measure of Fed communications based on textual analysis of newspaper articles and estimating how those messages affected interest rates before and during the ZLB period. We find that the zero bound altered but did not substantially constrain monetary policy, as Fed communications continued to affect long-term interest rates.

Before 2008, changes to the federal funds rate were the main tool used by the Federal Reserve to affect the economy. During that time, movements in the federal funds rate were transmitted to the economy through its effects on borrowing costs. In particular, changes in the policy rate were passed on to other short-term interest rates that influence borrowing costs for firms and households. Funds rate changes also influenced long-term interest rates, such as corporate bond and residential mortgage rates, because they reflect, among other factors, the current and expected future values of short-term rates. Therefore, following a decline in the policy rate, short- and long-term rates would also decline, lowering borrowing costs for consumers and firms and providing stimulus to the economy (Federal Reserve Board 2016).

As a response to the financial crisis and the ensuing recession in 2008, however, the Fed lowered the fed funds rate to near zero, where it remained until December 2015. As the policy rate could not be meaningfully reduced any further, the Fed’s main monetary policy tool was no longer available.

To bypass the limitation imposed by the zero bound, the Federal Reserve undertook unconventional monetary policy measures to try to lower long-term rates, shape expectations about future policy rates, and provide additional support to the economy. In particular, these measures included purchases of assets and active use of communication (Williams 2016).

While this was the first time the Federal Reserve implemented large-scale asset purchase programs, the Fed has been using communication as a tool since before the policy rate hit the zero lower bound. In fact, since May 1999, following every Federal Open Market Committee meeting, the Federal Reserve Board has released a statement providing some background information about its decision. These statements undoubtedly affect markets and have been shown in the literature to affect short- and long-term interest rates during “normal” times (for example, see Gürkaynak, Sack, and Swanson 2005 and Lucca and Trebbi 2011). In addition, the Chair of the Federal Reserve frequently testifies in Congress, and those meetings are closely followed by market participants for insights into the Chair’s view of prospects for monetary policy and the economy.

Therefore, while the zero bound has curbed its ability to adjust short-term rates, the Fed may still have been able to affect long-term rates. Indeed, Swanson (2013) has shown that during the zero-bound period long-term Treasury yields were still affected by macroeconomic news about the U.S. economy; this supports the notion that there was still scope for the Fed to shape longer-term rates.

To more directly assess whether and how the zero bound has constrained the Fed’s ability to conduct monetary policy, we compare the effects of Fed communications on Treasury yields of different maturities before and after 2008. We focus on communication because it was the only one of the three policy tools actively used in both periods. Other studies that have looked into the effects of asset purchases focus on the zero-bound period (see, for example, Swanson 2011, Bauer 2012, and Bauer and Rudebusch 2014).

We use the semantic-based measure of communication developed by Lucca and Trebbi (2011), which quantifies the content of Fed communications from newspaper and magazine articles. In particular, we construct a Factiva semantic orientation (FSO) by first collecting from the Factiva database all news articles in English that contain the words “Fed,” “Federal Reserve,” or “FOMC” in the headline that appear the day before, the day of, and the day after the communication date. That database provides a daily clipboard of articles from major world newspapers. From these articles, we select all sentences containing at least one of the following words: rate, policy, statement, announcement, Fed, FOMC, and Federal Reserve. We then count the number of times the words “hawkish,” indicative of a tight monetary policy stance, and “dovish,” indicative of a looser policy stance, are used in the selected sentences. The FSO is the ratio of the number of hawkish to dovish mentions. Therefore, a larger FSO value suggests that the communication is interpreted as more hawkish than dovish, that is, having a relatively tighter policy stance. For additional details and alternative word selections see Carvalho, Hsu, and Nechio (2016).

Figure 1 depicts the federal funds target rate along with a smoothed series of FSO scores for each communication date in our sample. In particular, the blue line corresponds to the moving average of FSO scores over the six previous communication dates. It shows that, up to 2009, the FSO precedes the target federal funds rate by a few quarters, suggesting that this ratio captures information about future movements in the policy rate (see Carvalho et al. 2016 for additional evidence). 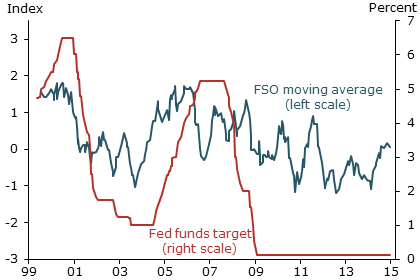 Using the measure of communication surprises, we can now estimate its effects on interest rates. First, though, we must account for how surprise changes in the policy rate and communication affected interest rates before the zero-bound period. We measure this using changes in the prices of fed funds futures contracts (for details of this calculation, see Carvalho et al. 2016). 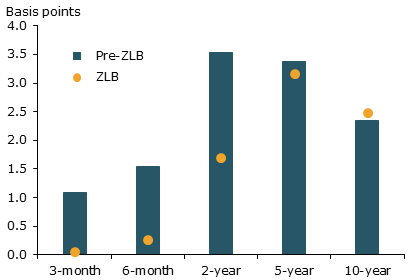 Figure 2 shows that between May 1999 and November 2008, Fed communications affected Treasury yields of all maturities. By contrast, the yellow circles show that the effects of Fed communications during the ZLB period are concentrated in longer-dated yields. In particular, the effects on yields of maturities up to one year decline substantially, while longer yields, continue to respond to communication surprises in a way that is basically unchanged relative to the pre-ZLB period.

These results are consistent with the idea that, despite the constraint on the Fed’s ability to influence short-term yields during the zero-bound period, communications continued to allow the Fed to affect longer-term yields.

With the policy rate at its effective zero lower bound, the Federal Reserve resorted to unconventional monetary policy measures, such as asset purchases and communication, in trying to stimulate the economy and shape expectations. To assess whether the zero bound constrained the monetary authority, this Letter compares the effects of Fed communications before and after the federal funds rate target reached its zero lower bound. We find that before this period, Fed communication surprises affected yields of both short- and long-term maturities. Since 2008, however, while the sensitivity of short-term yields diminished, the estimated effects of communication surprises on longer-dated yields were basically unchanged. These results provide evidence that, although the zero bound prevented the Fed from using its main conventional monetary policy tool, it did not constrain the Fed’s ability to affect long-term interest rates through communication with the public.

Eric Hsu is a graduate student at the University of California, Berkeley.