Following reports in 2015 that the Federal Reserve would likely begin to raise the short-term policy interest rate—after seven years of near-zero levels—net capital outflows from emerging economies intensified. Many of these countries also experienced large currency depreciations. These developments were similar to those following reports in 2013 about the possible tapering of the Fed’s asset purchases. Furthermore, in both episodes, financial market reactions varied across these developing economies according to each country’s own economic situation.

In a globalized world where investments can move freely from one country to another, changes in the course of one country’s monetary policy can also affect other economies. One salient example is the global fallout following reports in 2013 that the Fed might be concluding its unconventional purchases of government securities. Markets reacted strongly to the Federal Reserve’s first communication that it could consider scaling back, or tapering, its purchases. This so-called taper tantrum prompted investors to pull back from riskier assets, including those from emerging economies. During that episode, the emerging markets with weaker economic fundamentals faced larger currency depreciations.

More recently, the Federal Reserve raised its policy rate after keeping it at its effective lower bound for seven years. The “liftoff” of the policy rate was the first step towards normalizing U.S. monetary policy (Federal Reserve Board 2014), and it had the potential to affect other economies, similar to the tapering of asset purchases.

In this Economic Letter we evaluate how emerging market currencies performed following the liftoff news. We find that the reactions echoed the patterns observed in 2013: As the U.S. stepped closer to monetary policy normalization, currencies depreciated more for those countries with weaker economic conditions.

Recent changes to U.S. monetary policy and the effects on emerging economies

As a response to the global financial crisis and the ensuing recession of late 2007 through mid-2009, the Federal Reserve lowered its policy rate to near zero in December 2008, where it remained until December 2015. During that period, the Fed made wide use of unconventional monetary policies, such as large-scale asset purchases and active use of communication, to shape expectations about future interest rate policy and to provide additional stimulus to the economy (Carvalho, Hsu, and Nechio 2016).

Financial market participants closely follow Federal Reserve announcements and news releases. Based on these communications, they reassess and update their own expectations about the future course of U.S. monetary policy. Therefore, markets tend to react to Fed communications even before the policy action has taken place.

An example of one such episode was in May 2013, when markets reacted strongly the first time Fed officials mentioned a possible curtailment of its large-scale asset purchase program. In particular, following then-Chairman Ben Bernanke’s May 22 congressional testimony about the possibility that the Fed would begin scaling back these purchases (Bernanke 2013)—a reduction widely known as tapering—market participants revised their beliefs about when the central bank would begin normalizing its highly accommodative monetary policy (Bauer and Rudebusch 2013).

These changes in policy expectations led to a lower tolerance for risk among market participants and a downward reassessment of the probable returns from investing in emerging market economies. The taper scare prompted an overall drop in investment in riskier assets, including assets from emerging economies (Powell 2013). The effects on those economies, however, appeared to be related to each country’s economic condition. In particular, countries with larger external and internal imbalances during the low interest rate period faced larger currency depreciations when interest rate expectations began rising for advanced economies (Nechio 2014).

Despite the end of further asset purchases by 2014, U.S. monetary policy remained highly accommodative given the large size of the Fed’s balance sheet and the near-zero federal funds rate. The funds rate stayed near zero until December 2015, when the Federal Open Market Committee (FOMC) voted to raise it, an episode known as liftoff. As with the tapering of asset purchases, the Fed had signaled the conditions under which it would raise the policy rate before doing so. It stressed that the decision would be data-dependent, that is, liftoff would only start when economic conditions proved appropriate. These changes to the FOMC statements began in March 2015, long before actual liftoff. They were largely interpreted as the first signs that the liftoff date was near, and markets moved on the growing expectation that those conditions were approaching (for example, see Federal Reserve Board 2015a,b). 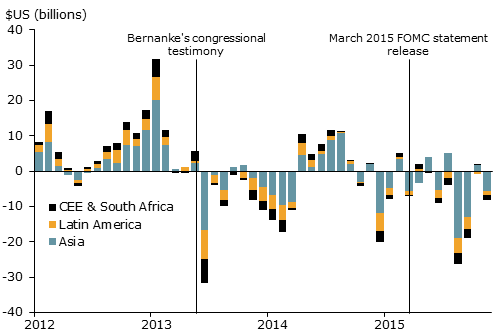 At the same time, similar to 2013, many emerging market economies experienced depreciations of their currencies. Figure 2 shows the currency depreciation between March and December 2015 for Brazil, India, Indonesia, Turkey, South Africa, Korea, Malaysia, the Philippines, Thailand, Chile, Mexico, Colombia, Peru, and Russia. The vertical line in Figure 2 indicates the average depreciation for the countries in our sample. While all of these countries’ currencies lost value during that time, the size of the depreciation varied substantially across the economies, with some countries below and others above the average. The patterns are qualitatively similar when we calculate currency depreciations following the FOMC meetings from April to July. 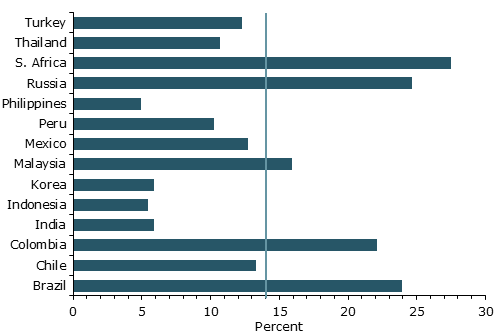 International finance research has shown that capital losses and their effects on exchange rates depend not only on external factors but also on domestic macroeconomic fundamentals (for example, see Forbes and Warnock 2012 and Edwards 2007). In particular, so-called sudden stops in capital flows can reflect disappointment in a country’s domestic economic growth or concerns about its growing internal and external imbalances.

To evaluate whether a country’s economic conditions relate to its currency depreciation, we focus on two widely used measures: fiscal balance to assess a country’s internal conditions, and current account balance to measure its external balance. The fiscal balance is defined as the difference between government revenue and expenditures, whereas the current account balance encompasses a country’s trade balance, measured as exports minus imports, as well as international cash transfers and earnings on foreign investments minus payments on foreign investments. Thus, a fiscal deficit, or negative fiscal balance, reflects an increase in public borrowing. Likewise, a current account deficit implies that a country consumes and invests more outside its borders than it produces, accumulating a negative net foreign asset position with other countries.

In general, debt defaults are more likely when the cost of servicing debt is greater. For an emerging economy, all else equal, the debt servicing cost rises with the size of external and internal imbalances. In particular, increases in overall debt obligations or declines in the resources available to pay them off typically jeopardize the perception among global investors that a country will be able to honor its outstanding liabilities. This may generate a lower assessment of expected investment returns, fueling a retrenchment of capital inflows and putting downward pressure on the national currency.

Figure 3 depicts the relationships between exchange rates and economic conditions for the same set of emerging economies shown in Figure 2. In particular, we compare each country’s currency depreciation from March to December 2015—the time that could have been affected by Fed communications about policy rate liftoff—with its fiscal and current account balances between 2012 and 2014. Panel A shows exchange rate depreciations and average fiscal balances as percentages of gross domestic product. Similarly, panel B shows depreciations and the average current account balance. Each panel also includes a trend line that reflects the best fit between the two data sets.

Figure 3
Relationships between currency depreciation and fiscal or current account balances, by country 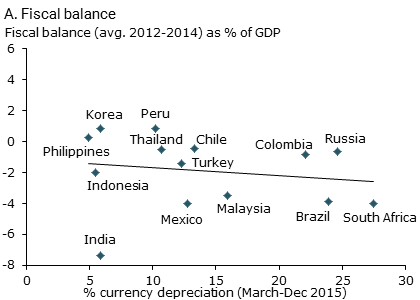 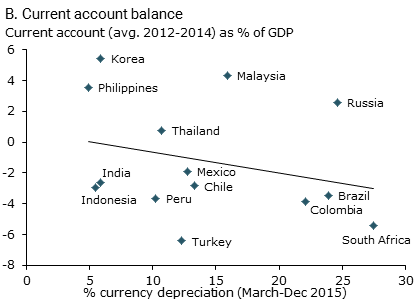 Our results suggest that the magnitude of the currency depreciations for individual countries depends in part on their fundamentals. Countries with larger fiscal or current account deficits also experienced above-average depreciation of their currencies. These findings, together with those of Nechio (2014), suggest that, as the United States approached monetary policy normalization—either by unwinding its asset purchase programs or by approaching liftoff of the policy rate—emerging economies faced sizable capital losses and currency depreciations. Throughout this period, though, we find countries with worse fundamentals were on average more sensitive to the changes.

Of course, other domestic macroeconomic variables and other external factors are important for determining emerging countries’ economic conditions. For example, Eichengreen and Gupta (2015) have shown that following the 2013 taper tantrum, the size and liquidity of countries’ financial markets also correlated positively with the size their currency depreciations. In addition, the recent slowdown in the Chinese economy and the ensuing decline in commodities prices—which were roughly concurrent with the U.S. policy normalization news—also affected many of the emerging market economies in our sample. China is a major trading partner with some of these countries, while others have economies highly dependent on commodity exports. Moreover, some countries also faced domestic challenges (IMF 2016). These conditions were likely to also have played a role in the reversal of capital flows and currency depreciations in 2015.

International capital flows are related to both external factors and a country’s internal fundamentals. While monetary policies in developed economies affect investor decisions, domestic economic conditions also play a role in shaping a country’s investment flows. Declines in net capital flows to emerging economies intensified following news about the tapering of U.S. asset purchases in 2013, and again more recently following the prospect of the U.S. policy rate liftoff. However, on both occasions, variations in financial market reactions appear to have been related to differences in each country’s economic conditions.

Julia Bevilaqua is a research associate in the Economic Research Department of the Federal Reserve Bank of San Francisco.

Federal Reserve Board of Governors. 2015b. “Press Conference,” June 17.