China has recently considered reforming its regulation of initial public offerings in equity markets. Current policy allows more IPOs in rising markets but restricts new issues in falling markets, possibly to avoid pushing down values of existing stocks. However, recent research finds China’s IPO activity has no effect on stock price changes, perhaps because of the low volume relative to the overall market. As such, cyclical restrictions on IPOs do not appear to have stabilized Chinese markets, so policy reforms may improve market efficiency without increasing volatility.

China’s financial depth is roughly in line with international norms based on GDP per capita (see Eichengreen 2015). Yet much of the country’s financial activity remains focused on debt, particularly bank loans. Despite impressive growth, its equity market is still small relative to the overall financial sector. As such, a major policy goal for the country has been continued development of its equity markets.

While many companies already have entered equity markets, China’s goal of moving further away from the debt market and bank finance will require new firms to enter the stock market. However, initial public offerings (IPOs) are controlled by the China Securities Regulatory Commission (CSRC). The commission has intermittently halted IPOs to stabilize stock markets (Figure 1). The most recent ban was from June to November 2015, in the wake of the steep equity market declines in China.

Figure 1
Number of IPOs and index values, Shanghai and Shenzhen 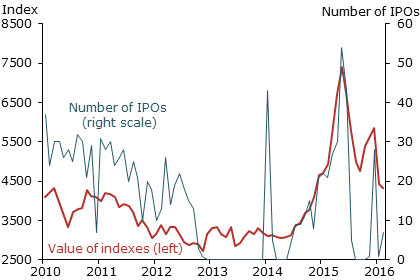 In this Economic Letter, we examine the patterns of Chinese IPO activity. Our results confirm that IPO volume in China follows “hot” and “cold” cycles similar to those observed globally: New IPOs increase after periods of equity market appreciation and fall off after share prices decline. If higher IPO activity resulted in overall stock market gains, for example by absorbing funds that would otherwise be invested in existing equity, then we would expect IPO volume to be inversely correlated with equity price movements. However, we find no such correlation. Thus, there is little evidence that the historical practice of encouraging IPOs in hot markets and discouraging them in cold markets has stabilized Chinese equity values.

The Chinese system for IPOs

Problems of asymmetric information, when a company’s managers know much more about its prospects than potential buyers, commonly arise in IPOs and the issuance of equities more generally. Such information asymmetries can explain variation over time in equity volume in advanced economy markets, since businesses can delay issuing equity when they know markets are undervalued and wait for a bull market (see, for example, Lucas and MacDonald 1990).

Information asymmetries may be more serious in China, because of inadequate disclosure and transparency. Zhou and Li (2016) document that one-third of the 600-plus small and medium companies approved for IPOs between 2005 and 2014 experienced a drop in net income growth of more than 20% after their first IPO. Of the sample, the study found that 29% had falsified their prospectuses before going public. Stricter guidelines for IPOs from the CSRC in 2013 called for real, accurate, and complete disclosure to satisfy basic legal criteria (Kreab & Gavin Anderson 2014).

Applications for IPOs must go through CSRC’s Public Offering Review Committee for approval. This can result in a massive backlog of firms awaiting approval; there are currently about 800 companies that have applied for listing. The government gate-keeping role has also been associated with larger and state-owned firms that have superior government connections being more likely to obtain IPO approval.

Once an IPO is approved, offer prices are in principle set by a two-round book-building system, introduced in 2005, in which mostly institutional investors are solicited for bids of interest. Retail investors then apply for shares at a fixed price. Before this reform, prices were fixed at arbitrarily low price-earnings ratios; together with the backlog of firms and lag times between the offer and the listing, this generally resulted in prices well below what the market was willing to pay for the shares (Ritter 2011). Though initial returns on IPOs in China were greatly reduced by the reforms, Song, Tan, and Yi (2014) found that they still averaged 66% between 2006 and 2011, well over international norms.

How has the timing of IPO activity been managed?

Chinese authorities frequently suspend IPO market activity, and in fact have done so five times since 2005. The most recent cessations have occurred in the wake of market declines, and IPOs were able to resume only after prices stabilized. IPOs were last halted in July 2015 during the downturn in Chinese equity markets. IPOs were restarted in November 2015, and have continued to date despite renewed volatility in Chinese equity markets this year.

The CSRC appears to have calibrated the pace of Chinese IPO activity in response to market movements. The number of IPOs allowed on the Shanghai and Shenzhen exchanges typically moves closely with equity values, as shown in Figure 1. One notable exception is in January 2014, when exchanges were opened to a large volume of IPOs to ease the sizable backlog after a long prohibition period. More systematically, even excluding months with no IPOs, the levels of initial offerings are closely related to past market returns: There is a positive correlation between the total number of IPOs on the Shanghai and Shenzhen equity markets and the previous three months’ returns in equity values (see Figure 2). Formal univariate regression analysis demonstrates a statistically significant relationship. Our point estimate indicates that a one-standard-deviation increase in equity returns over the previous three months is associated with approximately five additional IPOs. Formal results are available in an online Appendix. 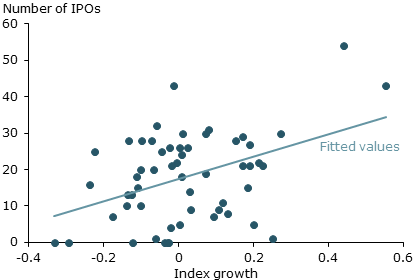 Even in markets without strong regulatory intervention, this pattern of IPOs increasing in periods of high market returns and declining when markets go cold has long been documented (see, for example, Helwege and Liang 2004 and Hamao, Packer, and Ritter 2000). Reports suggest that selected companies with preapproved IPOs have also been asked to hold off on issuance (Sweeney and Jianxin 2014).

Reducing market volatility appears to be one motivation for the CSRC to regulate IPO activity. Media briefings after the July 2015 suspension indicate that the action was taken to stabilize volatile stock markets (Zhu 2015). The timing patterns we observe in China would be stabilizing in the short run if the supply of IPOs could affect the prices of other shares, that is, if allowing more new issuance would cool excessively hot markets and restricting issuance would warm up cold ones.

Evidence in some other markets suggests that IPOs can affect asset prices. Braun and Larrain (2009) demonstrate that IPOs in 22 emerging markets push down the relative values of asset portfolios that covary with the newly issued asset. These findings suggest that investors treat IPOs to some extent as substitutes for equities that have already been issued and they can therefore push down the valuation of those shares.

However, these effects are important only when the issuance is large relative to the size of the market under study. This is unlikely to be the case in China, where the overall size of IPO issuance is quite small relative to total capitalized market values. Even during the 2015 IPO boom, issuance in any month was, at most, 0.06% of total Shanghai and 0.14% of Shenzhen market capitalized values. By comparison, the average single IPO in the sample of Braun and Larrain represented 0.25% of market capitalization. While market capitalization may greatly overstate the value of traded shares in some countries, the tradable share in China is large. For example, at the end of June 2015, the tradable share of market capitalization was 87% in Shanghai markets and 72% in Shenzhen markets.

Given the small size of IPO activity relative to overall market capitalization, it is then not too surprising that the data show little correlation between the volume of IPOs and contemporaneous market movements. Figure 3 plots the number of IPOs on the Shanghai and Shenzhen markets combined against average weighted returns of the indexes in these markets in the IPO month. There is clearly no strong relationship between these series. We again confirm this empirically using univariate regression analysis, available in our online Appendix. We find no statistically significant relationship between IPO activity and contemporaneous equity market returns. For the special case in which IPO activity is halted altogether, average monthly returns are actually higher on average than they are during months with positive activity; again, this fails to indicate that managing IPO activity smooths market returns. 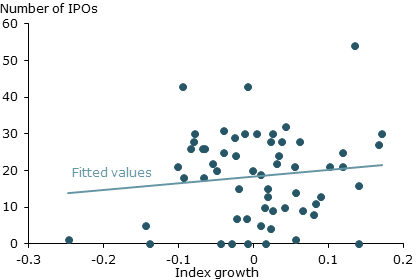 One potential concern is that IPO activity is endogenous, as our analysis demonstrates that more takes place in rising markets. If asset price movements are persistent, then our lack of observed correlation may simply reflect CSRC policy.

Equity markets around the world exhibit common patterns of IPO activity, with activity increasing in rising equity markets and falling in cold ones. However, in most advanced markets, this pattern stems from businesses timing their issuance strategically to improve returns to existing shareholders. In contrast, the control over the timing of IPOs by China’s regulatory commission and the backlog of firms awaiting IPOs imply that the quantity of IPO issuance in China has more than likely been a policy choice. Market stability has been one of the stated objectives of China’s IPO policy.

Timing IPO volume this way might be consistent with stabilizing Chinese asset values if IPOs were pushing down the values of existing shares. However, IPO activity in China is quite small relative to the overall capitalization of China’s stock markets. As such, we would not expect much impact from its management on Chinese equity values. Indeed, the analysis in this Letter finds almost no relationship between IPO volume and equity price movements. We therefore find no evidence that the regime’s regulatory intervention has stabilized markets. Further, if China were to reform its IPO regulatory practices, our analysis suggests that it should not cause the overall market to become less stable.

Frank Packer is a regional adviser in the Monetary and Economic Department of the Bank for International Settlements.