Some recent research has suggested that macroeconomic variables, such as output and inflation, can improve interest rate forecasts. However, the evidence for this puzzling result is based on unreliable statistical tests. A new simple method more reliably assesses which variables are useful for forecasting. The results from this method suggest that some of the published evidence on the predictive power of macroeconomic variables may be spurious, supporting the more traditional view that current interest rates contain all the relevant information for predicting future interest rates.

Consumers, investors, businesses, and policymakers all have a keen interest in predicting future interest rates. For example, if interest rates are expected to rise, homebuyers may want to secure a mortgage before they go up and investors should anticipate a capital loss on long-term bonds. Forecasts of interest rates are also fundamental for understanding financial markets and expectations of monetary policy. For example, the yield on 10-year U.S. Treasury bonds has been below 2% for much of the past several years. Is this because market participants anticipate short-term interest rates to stay below 2% over the next 10 years, suggesting that we are about to enter a long period of negative inflation-adjusted short-term interest rates? One way to answer such questions is by using statistical models to forecast interest rates based on the past history of the data.

This raises a question regarding which data are useful for forecasting interest rates. Is it sufficient to consider past interest rates to predict their future, or do we also need to take into account macroeconomic variables such as inflation and output, as a number of recent studies have suggested? These are the questions we consider in this Economic Letter. 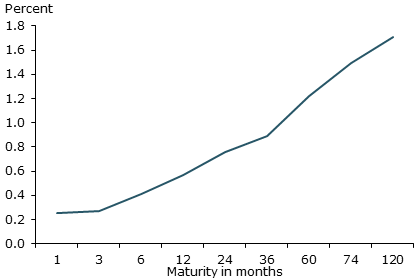 Source: U.S. Department of the Treasury.

To explore how the yield curve plays into investment decisions, suppose you want to invest money for a one-year period. One option is to buy a one-year bond, which will give you a guaranteed return of 0.7%, the one-year yield. An alternative option is to buy a 10-year bond and sell it after one year. This strategy, by contrast, is risky, because the future price of the 10-year bond is uncertain. To compensate investors for this risk, the second strategy delivers a higher return on average than the first strategy—that is, investing in a long-term bond on average has a positive “excess return” over investing in a riskless short-term bond. The expected excess return is called a risk premium.

Researchers have explored whether this risk premium varies over time or remains constant, as claimed by the well-known expectations hypothesis. A large body of academic literature has documented that excess returns are predictable using information in the yield curve (see, for example, Campbell and Shiller 1991 and Cochrane and Piazzesi 2005). This means that the risk premium varies over time, which violates the expectations hypothesis. The slope of the yield curve is often found to be particularly informative: A high slope, which we often see at the end of a recession, predicts high excess returns on long-term bonds. While no statistical model can predict future interest rates with absolute certainty, it is clearly useful to pay attention to the current shape of the yield curve when trying to predict future bond returns.

A closely related concept is the “term premium,” which is the difference between a long-term yield and the average expected future short-term yields over the same horizon. An example is the difference between the 10-year yield and the average expected 1-year interest rate over the next 10 years. In contrast to the prediction of the expectations hypothesis, the term premium is not constant but, like the risk premium in bond returns, varies over time. Returning to our earlier example, the 10-year yield could be low because expectations of future short-term interest rates are low or because the term premium is low. Answering this question, and estimating any term premium or bond risk premium, requires using forecasts of future interest rates.

What information is useful for forecasting?

There are some theoretical underpinnings for this hypothesis: If bond markets are efficient, any information that is useful for predicting interest rates would quickly be incorporated into current bond prices and yields, so no variables other than current interest rates are necessary (Duffee 2013). Theoretical macro-finance models generally imply that yields span the information useful for forecasting. In practice, it would be very convenient if the spanning hypothesis held true, since then there would be no need to consider macroeconomic series, other asset prices, survey expectations, or any other variables beyond the current yield curve.

Figure 2 illustrates the concept of spanning, borrowed from Bauer and Rudebusch (2015). It shows the slope of the Treasury yield curve and two macroeconomic variables: the unemployment gap, that is, the difference between the unemployment rate and an estimate of its long-run “natural” rate associated with stable inflation; and a measure of economic growth, the three-month average of the Chicago Fed’s National Activity Index. All three series are standardized to have a mean value of zero and the same scale. The unemployment gap moves closely together with the slope; this series appears to be essentially spanned, meaning that it contains little if any information that is not in the yield curve. By contrast, the measure of growth behaves very differently and is largely unrelated to the yield curve. Bauer and Rudebusch (2015) have documented that variables like the unemployment gap, which measure the level of economic slack—that is, the extent to which labor, capital, and other resources in the economy are not in full use—are closely associated with the slope of the yield curve. Furthermore, variables that measure the true, underlying rate of inflation in the economy correlate with the level of the yield curve. By contrast, measures of economic growth, such as the one depicted in Figure 2, have much less variation in common with the yield curve.

Figure 2
Slope of the Treasury yield curve and macroeconomic variables 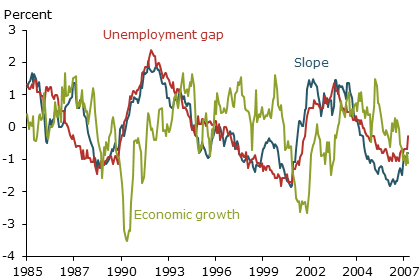 But these puzzling findings may be partially due to some important problems with the underlying statistical analysis. We study these problems in a new paper (Bauer and Hamilton 2016) and find that a main cause is the high persistence of variables used for prediction, meaning that past values of these variables are strongly correlated with their future values. This is the case for all three variables shown in Figure 2. For example, we can be reasonably confident that the value of the unemployment gap next month won’t be too far from its current value. Our paper shows in more detail that the usual standards for statistical analysis do not hold in such a setting. In particular, adding a very persistent macroeconomic variable to a predictive regression for interest rates may appear to improve its forecasts quite a bit, but this apparent improvement can be entirely due to chance.

In addition to working out the details of this problem, we provide a solution to it. We show how a simple simulation procedure can be a more reliable test of whether variables have predictive power for bond returns beyond what is contained in the yield curve. This procedure has the added benefit that it is designed specifically to test the spanning hypothesis. Using this new tool, we revisit the evidence in five influential published studies that have reported evidence against the spanning hypothesis. We find reasons to question the evidence in the data used by these studies based on the conventional standards for statistical significance. Our results suggest that some of the published results appear to be spurious. The theoretical problems described in our paper have large practical consequences for designing future research. Using our procedure provides a new way for researchers to guard against these problems in predictive regressions for interest rates and bond returns.

The yield curve contains a lot of useful information for forecasting interest rates and estimating bond risk premiums. Indeed, the spanning hypothesis states that the yield curve contains all the relevant information for this purpose. Some recent research has rejected this hypothesis and suggested that macroeconomic variables contain additional information that should be used. Our study of the evidence for this claim shows the statistical methods used suffer from some problems that make the results much less convincing. In Bauer and Hamilton (2016), we raise important caveats about predictive regressions for interest rates and find little robust evidence against the spanning hypothesis. In addition, Bauer and Rudebusch (2015) show that some important macroeconomic variables, such as measures of economic slack and underlying price inflation in the economy, are essentially spanned by the level and slope of the yield curve. We conclude that there is little if any evidence that disproves the view that the yield curve contains most if not all of the relevant information needed to forecast interest rates. Our results suggest that bond markets quickly and efficiently incorporate all relevant information, and there is no puzzling predictive power of macro variables beyond what is contained in current interest rates.

James D. Hamilton is a professor of economics at the University of California, San Diego.