Some closely watched measures of inflation expectations have been in gradual decline over the past five years. Over the same time, oil prices have fallen dramatically. Although the movements in energy prices are normally considered temporary, they appear to have played a large role in pushing down some longer-term forecasts for consumer price index inflation from professional forecasters. Analysis shows the drop in energy prices can explain about three-fourths of the decline in these professional inflation forecasts over the past five years.

Policymakers closely monitor inflation expectations to both assess current trends and help forecast where inflation is headed in the future (Cao and Shapiro 2014). In light of this, the declines reported in some closely watched measures of inflation expectations from the Survey of Professional Forecasters (SPF) have been of interest. For instance, the median SPF projection for average annual consumer price index (CPI) inflation over the next 10 years, also known as the 10-year SPF, has fallen about 20 basis points, or 0.20 percentage point, over the past five years. The projection for personal consumption expenditures (PCE) price inflation over the same period has fallen by a similar amount.

This Economic Letter assesses the role of energy price inflation in the decline of the median 10-year SPF projection for CPI inflation. We find that movements in energy prices can explain about three-fourths of its decline over the past five years. Specifically, our results suggest that if forecasters’ expectations of “noncore” inflation, which is driven mainly by energy prices, had remained at their 2011 level, the 10-year SPF would currently be about 0.15 percentage point higher. Overall, our analysis reveals that energy price projections are playing a large role in the decline in professional inflation forecasts because of their effects on forecasters’ anticipations in the shorter run.

The Survey of Professional Forecasters

In this Letter, we assess inflation forecasts from the Survey of Professional Forecasters, conducted quarterly by the Federal Reserve Bank of Philadelphia. The SPF surveys a sample of economists regarding their projections for many macroeconomic variables, including inflation measures over different time horizons. 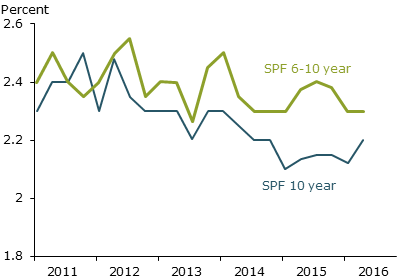 Figure 1 shows that inflation projections that focus solely on longer-term horizons have remained somewhat more stable than those for shorter time spans. The median projection for average annual CPI inflation over the next 6 to 10 years has fallen about 11 basis points, or 0.11 percentage point, since 2011. Comparing the two series, it seems plausible that factors normally perceived to be more temporary could be causing the downward trend in the median 10-year projection.

One of those factors is energy prices, which makes up 6.7% of the basket of goods used to determine CPI inflation. Energy prices have dramatically declined over the past five years. As shown in Figure 2, energy price inflation was close to 20% between 2010 and 2012, and then fell to zero between 2012 and 2014. Energy prices then began to decline at rates near 20% per year in 2015, but have risen somewhat since. The coinciding paths between energy inflation and the SPF’s forecast for inflation over the next 10 years raises the question of how much the two are related. 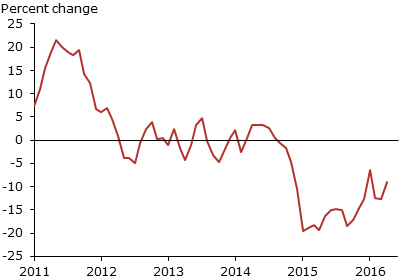 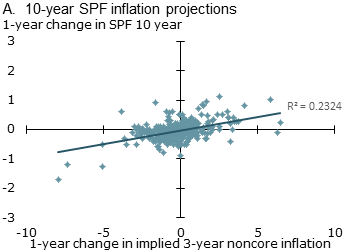 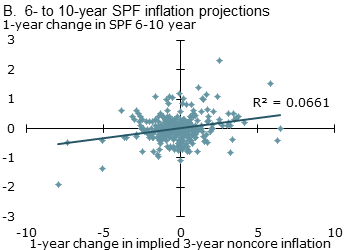 To quantify just how closely connected changes in a forecaster’s noncore and overall inflation forecasts are, we ran a statistical model called a fixed-effects regression. The model controls for unobserved factors specific to an individual forecaster but also accounts for observed macroeconomic conditions that are unrelated to energy prices. The results from the model imply that, all else equal, a 1% decrease in a forecaster’s noncore inflation projection translates into a decrease of 7 basis points (0.07 percentage point) in the 10-year inflation projection. Similar to the comparison between panels A and B in Figure 3, we found smaller effects on the 6- to 10-year projection: A 1% drop in a forecaster’s noncore projection was associated with a decrease of only 4 basis points (0.04 percentage point) in the 6- to 10-year forecast.

What if energy price inflation expectations had remained stable?

Figure 4
Influence on SPF from hypothetical scenario vs. model estimates 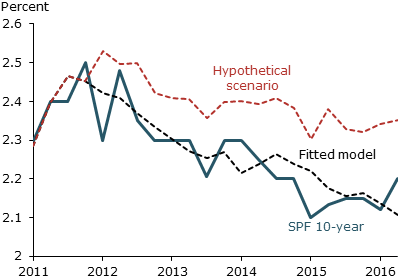 The results in this Letter show that a large portion of the sustained decline in the 10-year SPF is attributable to factors related to noncore short-term inflation, which is mainly driven by energy prices. These results may be consistent with Nechio (2015), who shows that a large portion of the recent decline in long-run inflation expectations can be attributed to individual forecasters in the SPF with low forecasting accuracy. Given the well-known difficulty in forecasting oil prices (Alquist, Kilian, and Vigfusson 2013), the inaccurate forecasters may be those who place substantial emphasis on energy price movements.

Yifan Cao is a research associate in the Economic Research Department of the Federal Reserve Bank of San Francisco.