Domestic bond markets allow governments to inflate away their debt obligations. However, they also may create a group of bond holders with the influence and desire to demand lower stable inflation. These competing interests suggest the net impact of creating a local currency bond market on inflation is ambiguous. Recent research finds that the creation of such markets in countries with an inflation target does reduce inflation: Countries with bond markets experience inflation approximately 3 percentage points lower than those without.

Some research suggests a history of variable inflation may make it difficult for a country to develop a local bond market (for example, Eichengreen 2006). Investors may not want to purchase bonds that appear to carry substantive “currency risk”—that is, the risk that the borrowing government will lower the real value of such debt in local currency by encouraging higher inflation. However, not having a domestic bond market may in turn play a role in determining a country’s macroeconomic variability. Firms that borrow in foreign currency but earn revenue in local currency face the risk that their balance sheet positions will fall in value along with exchange rate depreciation. This raises the possibility that creating and developing local currency bond markets may be conducive to greater macroeconomic and price stability.

This Economic Letter considers the implications of local currency bond markets for price stability, as studied in Rose and Spiegel (2015). The impact of local currency bond markets on the level and stability of inflation is not obvious. On one hand, local bond markets give issuing governments the incentive to raise inflation to reduce the real value of their outstanding nominal debt obligations. However, at the same time the holders of those nominal bonds can create a potentially formidable political force that benefits from low stable inflation.

We find that issuing bonds in domestic currency may encourage a government to pursue a lower inflation rate. This finding seems intuitive. The logic of collective action implies that inflation may decrease with bond market introduction when a small number of affluent bondholders bear more of the consequences of the inflation tax than the more diffuse money-holding public. When this is the case, our model demonstrates that wealthy bond holders, acting solely in their own interest in lobbying their governments for lower inflation, may actually help poorer households with inferior access to inflation-protected assets.

Low and stable inflation would seem to be a natural prerequisite for a local currency bond market to exist. However, partial default on the face value of its debt through inflation may prove less costly and disruptive than formally renegotiating the debt. As such, this form of default may be attractive to a country facing financing difficulties that make it challenging to issue domestic currency debt.

Analyzing the impact of local bond markets may be even more complicated, as the currency composition of debt may affect perceived borrowing risk, implying causality in the opposite direction (Jeanne 2000). Stable monetary conditions have been associated with greater shares of public and private domestic currency issuance (Claessens, Klingebiel, and Schmukler 2007 and Burger and Warnock 2007), as have expectations of more stable future monetary conditions (Hale and Spiegel 2012).

To address these endogeneity issues, our study limits the sample to inflation-targeting countries formally committed to avoiding inflation. Inflation-targeting regimes have proven remarkably durable and consistently deliver inflation that is low and stable compared with alternate regimes (Rose 2007). Thus, we study a set of countries that already seem to have the conditions necessary to establish a domestic currency bond market.

We begin with bond market data from the Global Financial Data Fixed Income Database, which spans more than 200 global markets between 1970 and 2012 (with gaps) and provides data on public- and private-sector yields. Data are available for those bonds traded with sufficient liquidity to have prices quoted, typically over the counter, and often after an initial auction. We focus on government bonds, since the corporate analogues tend to follow government bonds in time, and specifically examine markets with long-term, nominal, local currency bonds, since these are the most vulnerable to inflation.

Differences in inflation experiences are apparent in the raw data. In Figure 1, the distributions of consumer price index (CPI) inflation for inflation targeting countries show that inflation is typically lower for economies with bond markets than for those without. 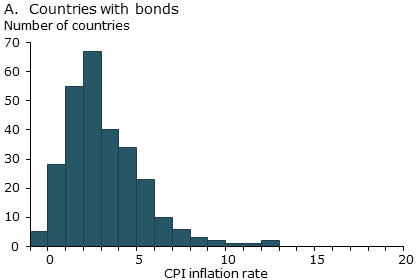 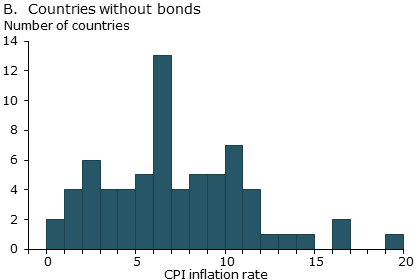 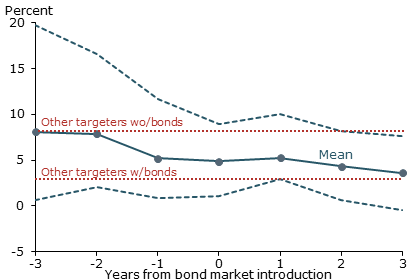 However, the event study should not be overinterpreted as there are only 14 cases where inflation targeters introduced a bond market during the sample. Further, the event of interest is the creation of the bond market; there appears to be a one-year anticipation of these events, which may not be surprising given the issues involved with setting up such a market. Accordingly, it is appropriate to add more rigor to the empirics.

To do so, we test conditions for country characteristics that are stable over time but may influence a country’s inflation performance. These tests confirm that inflation targeting countries with a domestic currency bond market experience CPI inflation that is on average 2.9% lower than those without bond markets, holding other factors constant. This result is significantly different from zero change at the 1% confidence level.

It’s interesting to note that the introduction of bond markets does not reduce inflation for many other monetary regimes, such as countries maintaining exchange rate pegs. Countries that peg their currency to another currency to stabilize the exchange rate may do so precisely because they face credibility issues. Exchange rate pegs often collapse, while inflation targeting regimes have proven remarkably stable. As such, pegged regimes may include countries with substantively different credibility concerning inflation, and thus may have quite different responses to domestic bond market creation.

These results prove robust to a battery of tests. First, coefficients are robust to changes in the precise data sample. Second, the precise econometric technique is also shown not to matter much. Third, the results are robust to the creation of alternative types of bond markets, including allowing for lagged bond market creation and shorter maturity markets. Finally, our study looks at the implications of alternative markets that don’t face domestic currency risk, including domestic bonds indexed for inflation and bonds denominated in foreign currency. Inflation continues to fall in both of these cases as well, but the impact of indexed bonds is smaller and no longer statistically significant.

In Rose and Spiegel (2015) we also consider causality and control for other characteristics that may influence inflation or bond market creation. To do so, we match the observations where bond markets are created to observations with similar country characteristics where bond markets do not emerge. This method is useful to handle so-called selection issues, since countries may choose in principle to create a bond market when the conditions are ripe because of an actual or expected fall in inflation. The estimated treatment effects of the bond market for inflation is between 3.6 and 5.1 percentage points. The bottom line for inflation targeters from a dozen treatment effect estimates is therefore quite similar.

We also employ instrumental variables, to see which fiscal and political conditions appear to affect bond market existence, such as the size of government spending in the economy and the age of the country. For example, if government spending rises, the need to borrow more is likely to encourage the development of local bond markets. The age of the country serves as a proxy for institutional capacity, which is also likely to be conducive for bond market creation. Overall, instrumental variable results continue to indicate an economically and statistically significant effect of a bond market on inflation for the inflation targeting countries. Moreover, these results do not depend on the choice of instrumental variables.

It is natural—if sometimes mistaken—to think that low and stable inflation is necessary for a bond market. In this Letter we consider the converse question: Does the existence of a long-term nominal local currency bond market help control inflation? In Rose and Spiegel (2015), our model suggests that the answer is yes, the creation of nominal bond markets may actually reduce inflation, despite the temptations faced by the government to reduce the real value through issued nominal debt. This is because, by issuing debt that is not protected from inflation, the government creates a group of domestic bondholders opposed to inflation. If this group is sufficiently powerful, the government may end up choosing less inflation than it would in the absence of the bond market.

Our empirical results support this outcome: The very existence of a market for long maturity, nominal bonds denominated in local currency seems to lower inflation by around 3 percentage points. Bonds that are either indexed to inflation or denominated in foreign currency do not have a similar effect. This result seems natural, in that countries with bond markets have a powerful, often influential interest group opposed to inflation. Yet the result is even more striking because the same results hold across countries with inflation targeting regimes, which already seem disposed to low and stable inflation. Other monetary regimes, such as those dedicated to maintaining hard fixed exchange rates, do not have the same reaction.

Andrew K. Rose is professor at Haas School of Business, UC Berkeley, and a visiting scholar at the Federal Reserve Bank of San Francisco.

Mark M. Spiegel is vice president in the Economic Research Department of the Federal Reserve Bank of San Francisco.