What’s Up with Wage Growth?

While most labor market indicators point to an economy near full employment, a notable exception is the sluggish rise of wages. However, this slow wage growth likely reflects recent cyclical and secular shifts in the composition rather than a weak labor market. In particular, while higher-wage baby boomers have been retiring, lower-wage workers sidelined during the recession have been taking new full-time jobs. Together these two changes have held down measures of wage growth.

Improvements in labor market indicators such as job growth and the unemployment rate are strong signals that the U.S. economy is returning to health. One puzzling exception has been the sluggish rise in wages. While wage growth typically rises as unemployment falls, this relationship has been muted in the current recovery. In this Economic Letter, we show that changes in the composition of the workforce propped up wages during the recession, despite a significant increase in labor market slack. As the labor market has recovered, this pattern has reversed. We find that cyclical components, such as the entry of low-wage workers to full-time jobs, have combined with secular components, specifically the exit of higher-wage retirees, to hold down recent measures of overall wage growth.

Standard economic theory tells us that wage growth and unemployment are intimately linked. Wage growth slows when the unemployment rate rises and increases when the unemployment rate falls. The experience since the Great Recession has been very different. Figure 1 shows overall wage growth averaged across four standard measures: average hourly earnings, the employment cost index (ECI) for wages and salaries, median weekly earnings, and compensation per hour. This average wage growth slowed much less than expected during the recession and has stayed relatively flat during the recovery. Even now when most measures of the labor market signal full employment, wage growth has lagged. Average wage growth across the four measures has been hovering around 2¼% for the past two years, significantly below the 3¼% average rate of wage growth from 1983 to 2015. The picture is similar for each measure of wage growth separately (not shown). 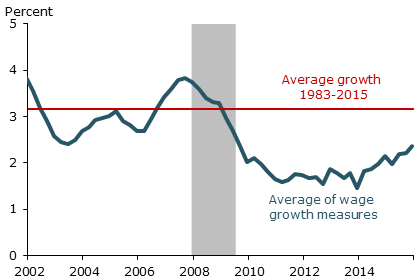 So what explains these patterns? Aggregate measures of wage growth like the ones used in Figure 1 are computed by taking the average wage in the economy in one period and comparing it with the average wage in the economy in a later period. By construction these measures include information on actual wage changes among individuals who are employed in both periods and information about wage differences between those who moved into versus those who moved out of employment between the two periods. Since these two components have different cyclical patterns, combining them into a single aggregate measure can disrupt the expected correlation between wage growth and unemployment (Bils 1985 and Solon, Barsky, and Parker 1994). Even the ECI, which is designed to minimize these issues by holding constant the composition of jobs in the economy, is susceptible to this problem (Ruser 2001).

To see how much of the wage growth puzzle can be traced back to compositional issues, Daly, Hobijn, and Wiles (2012) and Daly and Hobijn (2016) directly link movements in individual wages to changes in the median of the aggregate earnings distribution. The Daly-Hobijn approach uses a percentile decomposition method to analyze how the change in the aggregate median log-wage over a period relates to (1) wage changes among continuously full-time employed workers that cause them to cross the median and (2) entry to and exit from full-time employment for workers below versus above the median. The measure of median earnings used in the decomposition is closely related to the usual median weekly earnings series reported quarterly by the Bureau of Labor Statistics. By focusing on movements that affect the aggregate median, this method is able to account for how much compositional changes and wage changes of full-time employed contribute to the published aggregate used by policymakers.

Figure 2 shows the results of the Daly and Hobijn decomposition from 2002 through 2015. The gray line is the log change in median weekly earnings growth over a 12-month period. The blue and red lines show the contributions to this aggregate from changes in the earnings of the continuously full-time employed (blue) and from the net effect of worker entry and exit (red). 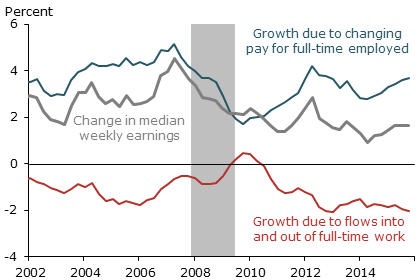 The results highlight a number of important facts about wage growth. First, during expansions, such as from 2002 to 2007, wage growth is pushed up by the wage gains of continuously full-time employed workers. Those who change jobs and those who stay at the same job over the year make similar contributions to overall wage growth (Daly and Hobijn 2016). In contrast, the net impact of movements into and out of full-time employment depresses wage growth, as exiting workers with higher wage levels are replaced by entrants to full-time employment who earn less than the median wage.

Second, as expected, during the Great Recession (2008–2009) wage growth slowed among the continuously full-time employed. However, aggregate wage measures were propped up by the disproportionate firing of low-wage workers. As those workers left the labor market, the mix of employees who remained on the payroll generally had higher-than-average skills and wages. This shift in the mix of workers boosted the average aggregate wage and had the effect of moderating the cyclical decline in wage inflation. This effect was amplified by the simultaneous sharp reduction in hiring. Since new entrants are more likely to take below-median wages, a reduction in entry boosts the average wage.

Finally, as the labor market has improved, the contribution to wage growth from the continuously full-time employed has increased, in keeping with economic theory. Both job stayers and job changers have contributed to this margin. Notably, the effects of exit and entry have become more of a drag on aggregate wage growth. Many workers on the sidelines of the labor force or holding part-time positions have been moving into full-time employment. The vast majority of these new workers earn less than the typical full-time employee, so their entry pushes down the average wage.

The composition of exit and entry 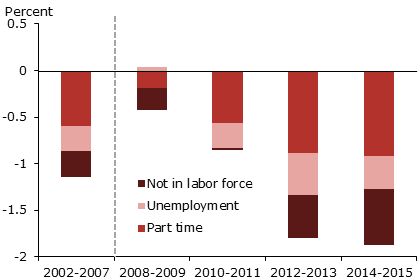 Table 1
Exit and entry wages: Share of group below median

While elevated flows out of full-time employment to not being in the labor force normally contribute positively to median wage growth, this contribution is being attenuated by the retirement of the baby boom. As baby boomers have begun to retire, the fraction of exits occurring from above the median wage has gotten larger, reflecting the relatively high earnings of older workers. The exits from full-time employment of older, higher-paid retirees have also pushed down wage growth. Furthermore, with so many of this generation still to retire, the so-called Silver Tsunami will be a drag on aggregate wage growth for some time.

Overall, our results suggest that changes in the composition of employment have had a significant impact on wage dynamics over the past seven years. During the recession, compositional changes served to prop up wage growth despite the large increase in labor market slack. As the labor market has recovered, this pattern has reversed. Compositional changes are now a drag on aggregate wage growth. Decomposing this drag, we show it has both cyclical components, such as the entry of low-wage workers, and secular components, such as the exit of higher-wage retirees. Many of the patterns exhibited throughout the recent business cycle are part of the normal dynamics of recession and recovery. However, the size of the Great Recession and the addition of the aging of the baby boom mean this time is different.

So what are the implications of these insights? The main one is that sluggish wage growth may be a poor indicator of labor market slack. In fact, correcting for worker composition changes, wages are consistent with a strong labor market that is drawing low-wage workers into full-time employment.

In this context, wage growth measures that focus on the continuously full-time employed are likely to do a better job of gauging labor market strength, since they are constructed to more clearly capture the wage dynamics associated with improving labor market conditions. The Federal Reserve Bank of Atlanta’s Wage Growth Tracker is an example.

How to best gauge the impact of wage growth on overall inflation is less clear. As long as employers can keep their wage bills low by replacing or expanding staff with lower-paid workers, labor cost pressures for higher price inflation could remain muted for some time. If, however, these lower-wage workers are less productive, continued increases in unit labor costs could be hiding behind low readings on measures of aggregate wage growth.

Mary C. Daly is senior vice president and associate director of research in the Economic Research Department of the Federal Reserve Bank of San Francisco.

Bart Hobijn is professor of economics at Arizona State University.

Solon, Gary, Robert Barsky, and Jonathan A. Parker. 1994. “Measuring the Cyclicality of Real Wages: How Important Is Composition Bias?” The Quarterly Journal of Economics, 109(1), pp. 1–25.