How Much Does the EMU Benefit Trade?

The economic benefits of sharing a currency like the euro continue to be debated. In theory, countries that use the same currency face lower trade costs and exchange rate risk and are able to compare prices across borders more easily. These advantages should help increase trade among the economies involved. New estimates suggest that this has been the case in Europe, though perhaps to a lesser degree than previously thought.

Economic crises in some European countries over the past few years have stirred up new debate about the benefits and costs of belonging to the Economic and Monetary Union (EMU). The costs of forgone national control of monetary policy have become particularly apparent for member countries like Greece. Whether the economic benefits of sharing a currency—lower trade costs, lower exchange risk, and greater price transparency—outweigh the costs is a key part of the debate.

To make this comparison, one must measure how much a common currency benefits a member country. There has been considerable disagreement concerning the magnitude of the trade-stimulating effect of the EMU, or indeed of any currency union in which member countries use the same currency. This Economic Letter presents estimates from Glick and Rose (2016) regarding the effects of currency unions in general and the EMU in particular on international trade. We find that the EMU has increased trade between member countries, although the benefit appears to be lower than in some previous estimates. Ultimately, how much currency unions affect trade between member countries depends on what statistical method is used to measure it.

Our study builds on earlier work (Glick and Rose 2002), in which we estimated how the amount of trade between two countries related to whether they were in a currency union. We looked at more than 200 countries from 1948 to 1997, before the establishment of the EMU. We found that bilateral trade approximately doubled as a pair of countries formed and halved when a currency union dissolved.

The relevance of this estimate for the EMU has been questioned on the grounds that it largely reflects the experiences of small dependent economies in currency unions with large anchor countries. For example, it’s unclear how much the experience of the Bahamas, which effectively adopted the dollar as its currency in 1966, applies to the experience of industrial countries such as France and Germany, which jointly adopted the euro. In fact, as summarized in Head and Mayer (2014), more recent studies have estimated currency unions improve trade less than our earlier estimates suggest, on the order of 30% or less for the EMU.

Our recent analysis (Glick and Rose 2016) extends our focus to include the effect of currency unions on international trade through 2013, which includes the introduction of the EMU. One significant challenge of measuring these effects is that many other things affect trade, so the interaction of all these factors makes it difficult to isolate and measure the effect of currency unions. To accomplish this we use the so-called gravity model, a simple empirical model that explains the magnitude of international trade between countries as being similar to Newton’s law governing the gravity between two forces. It models the flow of international trade between a pair of countries as being proportional to their economic “mass,” as measured by their incomes, and inversely proportional to trade frictions such as distance and other trade barriers between the countries. In other words, the larger the economies of two trading partners and the lower their costs of trade, the larger is the amount of trade that should flow between them.

Our data set consists of almost 900,000 bilateral trade observations for roughly 200 countries from 1948 to 2013. In accordance with the gravity model, we explain bilateral trade as a function of the GDP income of the two countries in each pair, the distance between them, and a host of other variables that may facilitate trade, such as sharing a border, a common language, membership in a common regional trade agreement like the European Union, or a similar colonial past. To this framework, we add a measure of whether or not two countries share a common currency or have a stable one-for-one interchange of their currencies.

During our sample period, a large number of countries joined or left currency unions. By far the biggest recent event in monetary unions was the establishment of the EMU, which began with 11 member countries in 1999 and has since expanded to 19 members. To account for the possibility that trade effects for EMU countries may differ from that for other currency unions, which typically involve a developing country, we distinguish between the trade effects of the EMU and non-EMU currency union pairs in our empirical analysis.

To see what the data can show about the effect of currency unions on international trade, particularly for the 15 years since EMU, we start with the approach of our earlier work: We measure trade as the average of exports and imports between each pair of countries and use a “fixed effects” estimator. This accounts for the many characteristics associated with cultural, historical, political, or geographic factors that affect the volume of bilateral trade, but are difficult to observe, let alone quantify. The fixed effects estimator controls for these unmeasurable factors by holding the average level of trade of each country pair constant and allows our estimates to focus specifically on the effects of changes in currency union status on trade over time.

We find with this approach that currency unions have a positive effect on trade. The EMU is estimated to raise trade by around 50%, while non-EMU currency unions boost exports by over 100%. Thus, we find that the EMU has a smaller trade effect than other currency unions, an effect that is well below the estimate implied by our prior work.

Our second approach takes account of more recent methodological developments in gravity model estimation (see Head and Mayer 2015). As Anderson and van Wincoop (2003) point out, the magnitude of exports between any two countries depends not only on their level of bilateral trade resistance but also on how difficult it is for each of them to trade with the rest of the world—what they call multilateral resistance. With all other things held constant, higher levels of multilateral resistance should be associated with higher bilateral trade. We control for these multilateral resistance effects and hold constant all country-specific phenomena, including those that don’t vary over time, such as land area, and time-varying characteristics like GDP. We continue to control for country-pair fixed effects as in the first approach.

With this second approach, the EMU raises exports by roughly 50%, similar to our first estimation approach. However, other currency unions improve exports by only 35%, less than their earlier finding. This suggests that accounting for the multilateral resistance significantly cuts down the estimated trade effects for non-EMU currency unions, possibly because many of them, such as the island members of the East Caribbean Currency Union, are some distance from key trading partners outside the union. We should note that the trade effects for non-EMU currency unions vary considerably; for some, such as members of the African CFA zone, the effect is much higher than 35%.

We are also interested in estimating the effects of currency unions over time, including how much trade is affected before and after the year of entry or exit from a currency union. Figures 1 and 2 show the effects of entry separately for EMU and non-EMU currency union pairs. The blue lines show how changes in exports relate to currency union status in the years before and after a union, along with a 95% confidence band (red dashed lines). The conversion to actual percent change in exports can be calculated from the exponential value of the log change plotted in the figures minus 1 (see Glick and Rose 2016 for details).

As shown in Figure 1, the EMU has a positive effect on trade even before entry, and it increases further in the years after entry. This is consistent with the view that the path followed by policymakers as they prepared to launch the euro was credible enough to lock in expectations about exchange rates before the euro’s formal adoption in 1999. This prompted exporters and importers to move earlier to take advantage of new market opportunities. The continued growth in the estimated effect of EMU in the years after entry is consistent with the view that there are significant lags before international traders respond fully to changes in the environment created by a new currency union. As shown in Figure 2, there is no evidence of increased trade prior to joining currency unions between non-EMU countries, though trade does increase afterwards.

Note: Estimates based on 432 EMU entries. 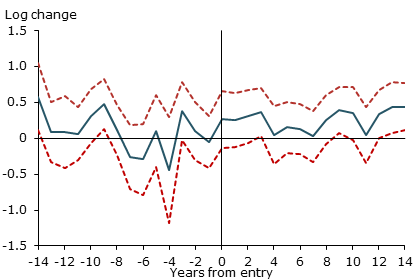 Note: Estimates based on 352 non-EMU entries.

Figure 3 shows the effects of currency union exits over time; this is limited to non-EMU currency union members, since there have been no exits from the EMU to date. The results seem intuitive as well. The effect of currency union on trade is substantial before an exit. Upon exit, trade starts to shrink, though it lingers for a decade or more afterwards. 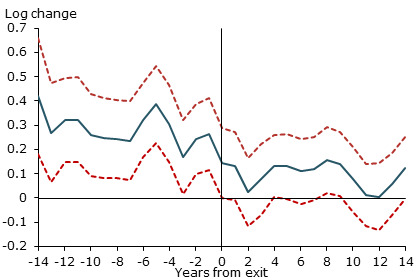 A concern is whether these results hold under alternative specifications and econometric methodology. In fact, we find that dropping the controls for unobserved factors affecting bilateral trade significantly lowers the magnitude of the EMU effect on trade and in some cases results in a negative effect. However, we believe that it is important to retain these controls for unobserved factors because there is no way to be sure that every relevant variable has been accounted for in the analysis. In future research we hope to make use of an econometric methodology that accounts for the zero trade or missing data that exists for many country pairs. For now, we regard our estimated effects of EMU on trade of roughly 50% to be a reasonable estimate.

The costs and benefits of sharing a common currency through membership in the EMU or any other currency union continue to be debated. The costs of forgoing national monetary policy control and giving up the ability to change the exchange rate are particularly apparent for member countries such as Greece. These costs must be weighed against the benefits of belonging to a currency union, including the greater trade and investment fostered by the lower transaction costs of changing currency, lower exchange risk, and the greater transparency of price comparisons across countries.

In this Letter, we estimate the effect of the EMU and other currency unions on trade using annual data that cover more than 200 countries between 1948 and 2013, including 15 years since the EMU was established. Our results suggest the EMU has a stimulating effect on trade. It is these benefits, among others, that presumably give Greece a strong reason to remain in the EMU.

Andrew K. Rose is a professor of economic analysis and policy at Haas School of Business, University of California, Berkeley, and a visiting scholar at the Federal Reserve Bank of San Francisco.