The increase in U.S. income inequality since 1970 largely reflects gains made by households in the top 20% of the income distribution. Estimates suggest that households outside this group have suffered significant losses from foregone consumption, measured relative to a scenario that holds inequality constant. A substantial mitigating factor for the losses has been the dramatic rise in government redistributive transfers, which have doubled as a share of U.S. output over the same period.

Income inequality in the United States has increased dramatically in recent decades. Most of the increase can be traced to gains going to those near the top of the income distribution. As emphasized by Piketty (2014, p. 297), from 1977 to 2007 three-fourths of the income growth in the U.S. economy went to the top 10% of households.

This Economic Letter summarizes the results of research by Lansing and Markiewicz (2016) that gauges the welfare consequences—that is, the economic gains or losses for households—of this pattern of rising U.S. income inequality. We use an economic model designed to exactly replicate the observed paths of numerous U.S. macroeconomic variables from 1970 to 2014, focusing on shifts in the income distribution.

Analyzing other scenarios shows that a relatively modest boost in the historical growth rate of redistributive transfers, accompanied by modestly higher average tax rates, could have achieved small but equal welfare gains for households throughout the income distribution.

The rise in U.S. income inequality

Figure 1 shows the dramatic climb in the share of before-tax income (excluding capital gains) going to the top 10% of U.S. households ranked by income. Their share increased from 32% in 1970 to 47% in 2014. The corresponding income share for the top 20% of households rose from 43% in 1970 to 51% in 2014. The faster rise of the top 10% share reflects the disproportionate gains of the highest earners. 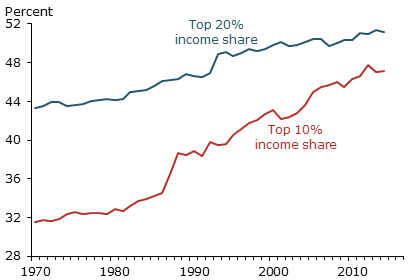 Another way to track income is by source. Labor income includes wages and other types of employee compensation. Capital income includes corporate profits, rental income, and net interest income. Figure 2 shows that the share of total income from capital sources increased from 35% in 1970 to 43% in 2014. During this period, the top 20% of households ranked by income owned more than 90% of total financial wealth (Wolff 2010). Given this highly skewed wealth distribution, the increase in capital’s share of income would be expected to disproportionately benefit households in the top 20% of the income distribution. But as a mitigating factor, Figure 2 also shows that government transfer payments to individuals approximately doubled, rising from about 7% of GDP in 1970 to nearly 15% in 2014. These transfer payments primarily redistribute income through various social programs, including disability and unemployment insurance, Medicare and Medicaid, and food stamps. As such, these transfers should disproportionately benefit households in the bottom 80% of the income distribution. 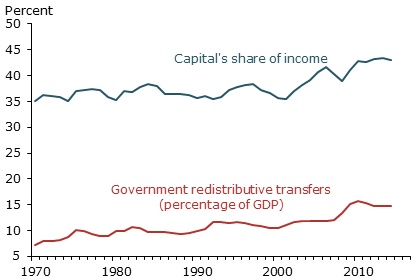 There are numerous theories about the underlying causes of rising income inequality (Dabla-Norris et al. 2015). Theories involving “skill-biased technological change” emphasize the relentless shift in the ways businesses produce and distribute goods and services—a shift that raises the relative demand and wages for highly skilled and highly educated workers. Alternative theories emphasize the forces of globalization and the expansion of the financial sector, which have contributed to “off-shoring” of production and other investments designed to reduce labor costs. Finally, theories based on institutional change emphasize the decline of labor unions and the rise of stock option-based executive compensation that have contributed to an environment where earnings at the top have been pushed well above historical norms (Piketty, Saez, and Stantcheva 2014).

The Lansing-Markiewicz model includes two groups: capital owners, who represent the top 20% of the income distribution, and workers, who represent the remainder. The top income group in the model owns 100% of the economy’s financial wealth—a setup that roughly approximates the highly skewed distribution of U.S. financial wealth. Income inequality in the model rises due to technological shifts in business production methods that favor capital owners. We model these shifts to exactly replicate the observed changes over time in the top 20% income share (Figure 1) and capital’s share of income (Figure 2). The model allows for a progressive income tax system, meaning that higher income groups face higher marginal tax rates. The model also accounts for redistributive government transfers and factors that drive business cycle fluctuations. We compute the time paths of tax rates and business cycle factors so that the model exactly replicates the paths of key macroeconomic variables, including government transfers, from 1970 to 2014.

The model allows us to split aggregate U.S. consumption expenditures into the implied consumption paths for capital owners and workers. We compute the welfare gain or loss by comparing each group’s consumption path to a hypothetical alternative scenario that holds income shares and redistributive transfers at their 1970 levels. 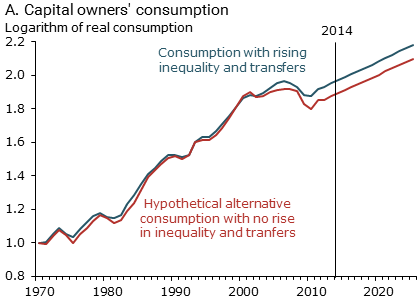 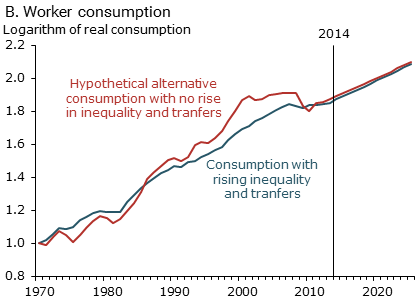 For capital owners (panel A in Figure 3), much of the welfare gains derive from the post-2005 upward shift in their actual consumption (blue line) relative to the alternative path (red line). This pattern can be traced to the significant increase in capital’s share of income starting around the mid-2000s, as shown in Figure 2. In the model, the increase in capital’s share of income is driven by a technological shift that causes business production methods to make more use of capital rather than labor. This shift raises the return to capital investment, and capital owners reap a large reward. In the long run, capital owner consumption shifts up by more than 10% relative to the alternative scenario.

Worker consumption eventually catches up to the alternative path around 2050 (not shown) and then starts to surpass it. The catching-up effect is driven by capital owners investing more, which contributes to more production and more output per worker, eventually resulting in a higher wage for workers. In the long run, worker consumption shifts up by about 1% relative to the alternative scenario.

If the ratio of transfers to output were held at the 1970 level but income inequality continued to rise as before, then the welfare loss for workers would be magnified by a factor of nine. In other words, workers would now be willing to give up 9% of their annual consumption every year in perpetuity to avoid living in the economy with rising inequality. This result shows that the historical pattern of U.S. transfer payments has done much to mitigate the negative impacts of rising income inequality for households outside the top income group.

We can also use the model to determine how transfers would have needed to grow to deliver equal welfare gains to workers and capital owners over the simulation period. According to the model, the ratio of transfers to output would have needed to increase faster, reaching 19% by 2014 versus the actual value of 15% in the data. In this case, the welfare gain for both groups turns out to be very small, amounting to only 0.12% of their annual consumption every year in perpetuity. This is due to the need for higher tax rates to finance the faster transfer growth. But these higher tax rates would still be near the low end of the range of average tax rates among OECD countries (Piketty and Saez 2013).

The increase in U.S. income inequality over the past half-century can be traced to gains made by those near the top of the income distribution—where financial wealth and corporate stock ownership is highly concentrated. The economic and political implications of this pattern of rising inequality have garnered substantial attention among researchers and policymakers.

According to our analysis, the increase in income inequality since 1970 has generated large welfare gains for households in the top 20% of the income distribution and significant welfare losses for those in the bottom 80%, measured relative to a scenario that holds inequality constant. Alternative simulations imply that a relatively modest boost in the historical growth rate of government redistributive transfers, accompanied by modestly higher average tax rates, could have achieved small but equal welfare gains for all households. Overall, our results suggest that there is room for policy actions that could offset the negative consequences of rising income inequality.

Agnieszka Markiewicz is an assistant professor at Erasmus University, Rotterdam.