Although China’s growth has slowed recently, the country’s demand for oil could be entering a period of faster growth that could result in substantially higher oil prices. Because Americans buy and sell oil and petroleum products in the global market, global demand prospects influence the profitability of U.S. oil producers and the costs paid by U.S. consumers. Analysis based on the global relationship between economic development and oil demand illustrates the prospects for Chinese oil demand growth and the resulting opportunities and challenges for U.S. producers and consumers.

The oil market has seen two major surprises in the 21st century. The most recent was the shale revolution, which dramatically increased the amount of oil supplied by North American producers and contributed to the oil price collapse of 2014.

Before the shale revolution, however, there was rapid demand growth from emerging market economies. Propelled by robust GDP growth, China’s demand for oil nearly doubled within a decade, and other emerging markets experienced similar growth. As a consequence, oil prices soared in 2007 and 2008, and advanced economies, including the United States, cut their consumption.

Most studies assume that shifts in global demand over the next decade will be gradual, with oil prices continuing to be driven primarily by supply. The surprising resilience of U.S. shale oil production both to lower oil prices and to coordinated actions by OPEC countries suggests that any oil price recovery will remain subdued (Energy Information Administration 2016). However, one potentially important source of future rapid growth in demand and thus in prices comes from emerging market economies, especially China. Given that Chinese demand helped boost world oil prices in the early 2000s, we consider the implications of a similar surprise in the coming years.

China’s future demand for oil will depend on both its economic growth and its energy choices. A high level of growth combined with energy-intensive choices could result in Chinese oil demand doubling by 2025. Even in a scenario with more moderate growth and less energy-intensive choices, China’s oil demand would still grow by over 30% by 2025. To the extent that U.S. and foreign oil producers do not anticipate this demand increase, prices would have to rise, perhaps dramatically.

The importance of China for oil prices

Because of its size and rapid economic growth, China is of primary importance in determining the path of global oil demand. Between 2005 and 2015, China’s oil consumption increased by 4.8 million barrels per day (mb/d). To put this in perspective, world oil consumption grew by 9.8 mb/d over the same period. Although China accounted for only 12.2% of global oil demand in 2015, it accounted for almost one-half of the increase in demand between 2005 and 2015. These increases more than offset decreases elsewhere over the same period, as the United States reduced its oil consumption by 1.3 mb/d, and other advanced economies reduced their oil consumption by 2.9 mb/d.

As economic development continues in China, its share of global oil demand is likely to expand further. Although China won’t match the level of per capita demand among developed nations anytime soon, its large population implies that even modest increases in per capita consumption may have dramatic effects on global energy markets.

To estimate oil demand growth in China, we adapt the Varian rule (McAfee 2015). Named after economist Hal Varian, the rule posits that “a simple way to forecast the future is to look at what rich people have today; middle-income people will have something equivalent in 10 years, and poor people will have it in an additional decade” (Varian 2011). Although the Varian rule was originally applied to the spread of luxury consumer goods, we extend this rule to apply to nations’ demand for oil: As countries transition from low to middle to high income and consumers’ demand for material goods increases, so will the demand for oil.

For example, consider recent oil demand growth in Korea. Figure 1 illustrates the rapid growth in Korean GDP and oil demand in the 1990s, followed by a period of slower growth and roughly stable oil demand. Consistent with our take on the Varian rule, as Korea’s GDP rose, it rapidly adopted levels of per capita oil consumption that were comparable to those of high-income countries. The impact of this dramatic increase in per capita oil demand on global oil markets, however, was slight. This was because Korea’s increase in oil demand was only a small fraction of global production, and also because, at that time, Saudi Arabia had ample spare capacity. A similarly rapid transformation accompanied by a large per capita increase in oil consumption in a larger country like China would have much more dramatic effects on global oil markets. 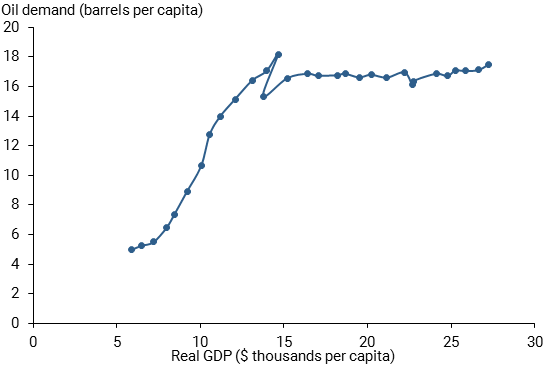 To apply the Varian rule to China, we first look at per capita oil consumption across the world today and see how it varies with income. We use that information to make a forecast for China’s oil demand, conditional on an assumption about China’s income growth. Using oil demand data from the International Energy Agency and GDP and population data from the International Monetary Fund (IMF), we generate a sample of 126 countries that is fairly representative of the complete set of countries in the world based on size and income. Figure 2 shows a best-fit line (dashed blue line) representing the relationship between per capita GDP and per capita oil demand for these countries. We use a logarithmic scale for GDP per capita (multiples of 10) to show the full range of data and to capture the nonlinear relationship between the two variables. 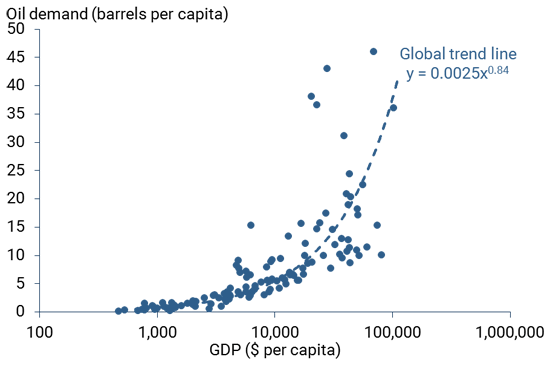 Of course, there are caveats to our approach. Our analysis does not consider any existing or potential policies specific to China that encourage or discourage oil consumption. Furthermore, we assume that China will adopt technologies similar to those already in place in other countries. If policies were enacted to encourage more energy efficient technologies or to limit carbon emissions, the Varian rule estimate could overpredict oil demand growth.

Figure 3 shows our application of the Varian rule for China (dashed blue line), adjusting the best-fit line from Figure 2 to begin forecasting from China’s current level of GDP and oil demand. As an alternative to the Varian rule, we also consider what would happen if China’s oil demand increased at a pace consistent with its past growth rate. China’s real per capita GDP and per capita oil demand from 1985 to 2015 are depicted by the red line. We then extrapolate from these data to generate the best-fit trend for China (dashed green line). Using these lines, we estimate how much China’s oil demand will increase for any given growth in its real per capita GDP. 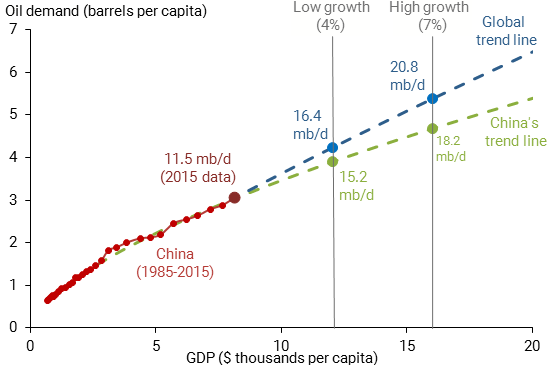 To highlight the range of possible outcomes for oil demand, we consider two different scenarios for China’s real per capita GDP in 2025: a high growth scenario of 7% growth per year and a low growth scenario of 4% growth per year. These numbers reflect a range of plus or minus 1.5% around the IMF’s World Economic Outlook (2016) forecast that China’s real per capita GDP will grow 5.5% per year on average through 2021. Finally, our two trend lines determine the associated predictions for China’s per capita oil demand in 2025 (green and blue dots in Figure 3). We combine our prediction for per capita demand with an estimate of China’s 2025 population from the United Nations Population Division to get total demand.

To move from projections for China’s oil demand to implications for oil prices, one must consider the outlook for both oil supply and other countries’ oil demand. One such analysis by the U.S. Energy Information Administration (EIA) forecasts the price of oil to rise only gradually from about $55 per barrel in 2015 to $90 per barrel in 2025; it also forecasts China’s oil demand in 2025 to be just 13.8 mb/d—significantly below our range of forecasts. At the lower end of our range, China’s demand would grow a bit faster, likely pushing prices above the $100 per barrel mark. However, if China’s oil demand were to reach the higher end of our range of projections, the market would be surprised by additional demand of up to 7 mb/d relative to the EIA forecast. Given such a significant increase in demand, how much would oil prices rise?

Using the response of oil prices to surprises in demand growth from Hamilton (2009), with a price elasticity of 0.1, if supply did not increase to meet the additional demand growth, oil prices would have to almost double from $90 to $172 per barrel in order to balance demand and supply in our high-demand scenario. Although this represents an extreme and less likely outcome, it does highlight the risk of unexpectedly strong demand growth.

Whether China’s oil demand growth follows the global patterns predicted by the Varian rule or a more modest path implied by its own recent history, the country’s size combined with its rapid pace of economic development ensures that it will be a vitally important factor in energy markets in the years ahead.

American oil consumers and oil producers should consider conditions in China as they contemplate their consumption and investment decisions. In particular, if both domestic and foreign oil producers are reluctant to invest now in exploration and development, they may be unable to expand quickly to meet a sharp increase in Chinese demand. If global supply cannot expand fast enough, oil prices will have to rise to balance the market, as they did in the early 2000s.

Even if stronger Chinese income growth results in higher oil prices, the U.S. economy could benefit on net. Because the United States remains a net importer of oil, high oil prices, in isolation, hurt oil consumers more than they benefit domestic oil producers. However, this negative direct effect could be offset if stronger Chinese income growth boosts demand for other U.S. exports.

Overall, the effect of stronger income growth in China could be positive for the global economy. In light of its effect on oil demand, however, American consumers may want to reassess their energy intensive choices today, selecting smaller cars and shorter commutes to guard against the potential shock of rising oil prices in the future.

Robert J. Vigfusson is Chief of Trade and Quantitative Studies in the International Finance Division of the Federal Reserve Board of Governors.

McAfee, Andrew. 2015. “What Do the Rich Have Now That Will Soon Spread?” Financial Times, April 7.