Population aging and the consequent increased financial burden on the U.S. Social Security system is driving new proposals for program reform. One major reform goal is to create stronger incentives for older individuals to stay in the workforce longer. However, hiring discrimination against older workers creates demand-side barriers that limit the effectiveness of these supply-side reforms. Evidence from a field experiment designed to test for hiring discrimination indicates that age discrimination makes it harder for older individuals, especially women, to get hired into new jobs.

In coming decades, the share of seniors age 65 and older in the U.S. working-age population is projected to rise sharply—from about 19% currently to 29% in the year 2060—approaching equality with the shares of those aged 25–44 and 45–64 (Figure 1). With much lower employment among those aged 65 and over, the aging of the population will pose fundamental public policy challenges, as the “dependency ratio”—the ratio of nonworkers to workers—rises sharply and labor force growth slows. 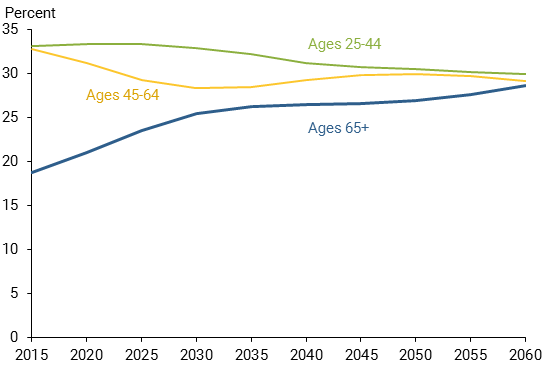 Policy efforts to boost the labor supply of older Americans have focused on reforms to Social Security, including reducing benefits for those claiming at the early eligibility age of 62, increasing the full retirement age (with additional increases scheduled in the future), and reducing the taxation of earnings after Social Security benefits are claimed—which increases benefit claiming at earlier ages but also increases labor supply post-claim (Martin and Weaver 2005, Figinski and Neumark 2016). Efforts to encourage people to work longer via these supply-side reforms may be thwarted, however, by age discrimination in labor markets. This potential for age discrimination can be doubly problematic: If businesses don’t respond to the policy-induced larger labor supply by hiring older workers, it could lead to even harsher policy reforms for seniors with more adverse effects on older workers who are not actively seeking to work longer.

In general, economists find it challenging to establish evidence of labor market discrimination. A working definition of discrimination is when equally productive people are treated differently in the labor market—in this case, with respect to getting hired—simply because of their group membership, whether based on age, race, sex, etc. Whether such discrimination is based on outright dislike or stereotyping about group characteristics, it is illegal under U.S. civil rights laws. When we simply see different outcomes for groups in observational data, however, it can be hard to determine whether the difference arises solely because of group membership—which constitutes discrimination—or because of other differences between the groups. For example, in the context of age discrimination, one might posit that longer durations of unemployment for older workers arise not because of hiring discrimination, but because older workers are less willing to accept certain kinds of jobs, such as jobs with lower wages or greater physical demands.

To address these measurement challenges, social scientists have developed tests for hiring discrimination based on “audit” or “correspondence” studies. These studies are designed to mimic controlled experiments by creating artificial job applicants who have identical job-related background characteristics other than race, ethnicity, or gender. Hence, when they apply for the same real-world jobs, differences in hiring outcomes are plausibly attributable to discrimination. Audit studies use actual applicants coached to act alike and measure job offers as the outcome. Correspondence studies create applicant profiles (on paper or electronically) and measure callbacks for job interviews, which past research indicates are predictive of differences in hiring rates. Correspondence studies are now used far more commonly, because they can collect larger samples of job applications and outcomes, especially using the Internet; because they avoid “experimenter effects” that can influence the behavior of the actual applicants used in audit studies (Heckman and Siegelman 1993); and because they impose less burden on real-world employers. These methods have been used to study discrimination in hiring based on race, gender, ethnicity, age, and even—in the context of recovery from the Great Recession—length of prior unemployment spells.

To garner evidence on the importance of age discrimination in hiring, in particular at ages near retirement where policymakers are trying to strengthen incentives to work longer, we carefully designed a correspondence study to overcome potential biases in past studies on age discrimination (Neumark, Burn, and Button 2016). We created realistic but fictitious resumes for young (aged 29–31), middle-aged (aged 49–51), and older (aged 64–66) job applicants. Then we submitted these resumes to ads for job categories that employ large numbers of fairly low-skilled workers of all ages, and that do at least some hiring of both older and younger workers. The jobs included administrative assistants and secretaries (to which we sent female applicants), janitors and security guards (male applicants), and retail sales (both genders). Note that the experiment covers fairly low-skilled jobs. That is because labor economists using audit and correspondence study methods believe that realistic responses to fictitious job applicants are less likely in more high-skilled labor markets where employers are more likely to be familiar with job applicants.

We specifically crafted variations on resumes that older workers actually present, including one that showed the common path of moving to a lower-skill job later in life (think, somewhat stereotypically, of store greeters at Walmart).

We leveraged technology to conduct our study on a massive scale. In the end, we sent triplets of otherwise identical young, middle-aged, and older fictitious applications to over 13,000 positions in 12 cities spread across 11 states, totaling more than 40,000 applicants—by far the largest scale audit or correspondence study to date.

For male job applicants—in sales, security, and janitor jobs—there is also a lower callback rate for older men in general. But in this case the age pattern is not as consistent or pronounced, and in some cases the estimated differences between the young and old groups are not statistically significant. For sales jobs, which we can directly compare with women’s results, the difference in callback rates between old and young applicants shows a slightly smaller but still statistically significant 30% drop, 14.70% versus 20.89%.

Overall, the results in Figure 2 indicate that women face worse age discrimination than men. In retail sales, where we could directly compare results for both genders, we found a sharper drop-off in callback rates with age for women than for men. And for the solely male applicants to janitor and security jobs, the pattern of lower callback rates for older applicants was less clear than for the older versus younger solely female applicants to administrative or retail jobs.

Our field experiment provides compelling evidence that older workers experience age discrimination in hiring in the lower-skilled types of jobs the experiment covers. This evidence implies that there are demand-side barriers to significantly extending work lives. Reducing these barriers would likely directly help boost employment of older workers to meet the challenges of population aging. Furthermore, there is evidence that reducing age discrimination can increase the impact of supply-side reforms intended to induce higher labor supply among older workers (Neumark and Song 2013).

The evidence that older women experience more age discrimination than older men provides an additional argument for combining policies that reduce demand-side barriers to hiring with supply-side reforms to encourage people to work longer. Supply-side reforms typically operate in part by reducing retirement benefits at younger ages. Already many women outlive their husbands and end up quite poor (Gornick et al. 2009). If age discrimination is particularly severe for older women, then using supply-side policies alone to induce later retirement may mainly reduce older women’s retirement benefits without doing much to increase their employment.

David Neumark is Chancellor’s Professor of economics and Director of the Economic Self-Sufficiency Policy Research Institute (ESSPRI) at the University of California, Irvine, and a visiting scholar at the Federal Reserve Bank of San Francisco.

Ian Burn is a doctoral student in economics at the University of California, Irvine.

Patrick Button is an assistant professor of economics at Tulane University.