Do All New Treasuries Trade at a Premium?

In the Treasury market, the most recently issued security typically trades at a higher price than more seasoned but otherwise comparable securities. The difference is known as the “on-the-run” premium. This phenomenon opens the question of whether a similar premium exists for all Treasury bonds. Examining yield spreads between pairs of inflation-protected securities, known as TIPS, that have identical maturities but different issue dates suggests that this is not the case: There is no on-the-run premium in the TIPS market at this time.

A long-standing pattern shows that newly issued U.S. Treasuries tend to trade at a higher price than more seasoned but otherwise comparable Treasury securities. This difference in the prices between new and old securities is referred to as the “on-the-run” premium and reflects the added convenience of newer bonds for ease of trading and in repurchase transactions.

Does this premium exist for all Treasury securities? In this Letter, we describe recent research by Christensen, Lopez, and Shultz (2017), who examine whether this pattern holds true for recently issued Treasury Inflation-Protected Securities (TIPS), which are specialized Treasury securities that offer investors protection against inflation and some protection against deflation over the life of the bond. These securities provide a “real” or inflation-adjusted return as opposed to a nominal return. Because these securities provide different returns, they are likely to be attractive to a different set of investors and thus may have different price patterns.

Our analysis exploits a unique development in this market: Several 20-year TIPS issued in the past now have maturity dates that are identical to those of newly issued 10-year TIPS. This provides an ideal natural experiment for studying on-the-run premiums for TIPS bonds. However, merely looking at yields of matching TIPS does not take into account differences in their coupon rates or in the values of their embedded deflation protection. To adjust for these effects, we use a model introduced in Christensen, Lopez, and Rudebusch (CLR 2016). With this adjustment, we find that there is no significant on-the-run premium in the TIPS market currently, which suggests that the phenomenon may be unique to the nominal Treasury bond market.

The on-the-run premium in Treasuries

Researchers have cited several explanations for why newer nominal Treasury securities trade at a higher price than more seasoned ones. A common reason is that the newly issued security is available in greater quantities and is more liquid than older securities that have drifted into investors’ portfolio holdings. Another reason is that these bonds are preferred for overnight and short-term transactions because they have not changed much in nature relative to when they were first issued. Figure 1 shows a measure of the on-the-run premium based on the difference between par-coupon yields of seasoned 10-year Treasury bonds (as in Gürkaynak, Sack, and Wright 2007) and the yield on newly issued 10-year Treasury bonds (as reported in the Federal Reserve’s H.15 series). This yield spread has been positive since 1995 with the exception of a brief period between May 2012 and May 2013, when liquidity concerns appear to have mattered less because of large Fed Treasury purchases. Overall, it has averaged about 14 basis points (or 0.14 percentage point) and varies notably with persistent deviations from its mean for extended periods. 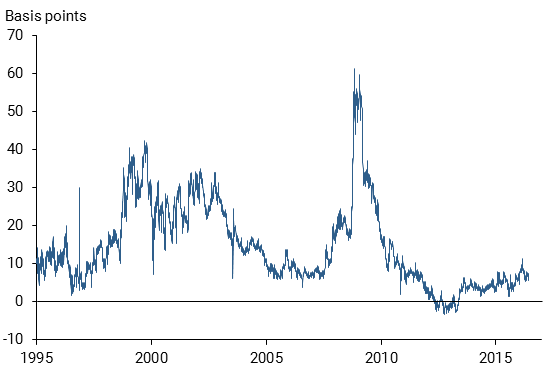 A new set of data on TIPS issuance, combined with the method developed in CLR for dealing with the necessary adjustments, gives us a new opportunity to examine whether the on-the-run premium also affects prices in the TIPS market.

The market for TIPS bonds

TIPS are Treasury bonds whose principal and coupon payments vary with changes in the consumer price index and thus provide an inflation-adjusted rate of return. Since its inception in 1997, the TIPS market has grown to $1.2 trillion, accounting for 8.8% of all publicly held Treasury marketable debt as of June 2016. Still, the overall liquidity of TIPS is lower than that of nominal Treasuries, perhaps because their returns and other characteristics attract different investors. For example, the trading volume of Treasury securities is more than 20 times greater than that in the TIPS market; this might suggest a lower or insignificant on-the-run premium for TIPS.

Since January 2004, the Treasury has issued new 10-year TIPS bonds regularly twice a year in January and July, with maturities 10 years later on January 15 and July 15, respectively. Importantly for our analysis, between October 2004 and January 2009 the Treasury also issued five 20-year TIPS, each maturing 20 years later on January 15. As a result, there are currently two pairs of TIPS trading with identical maturities: One pair matures on January 15, 2025 (with identifying CUSIP numbers 912810FR4 and 912828H45), and the other matures on January 15, 2026 (CUSIP numbers 912810FS2 and 912828N71). We identify them as the 2015 TIPS pair and the 2016 TIPS pair, respectively. Eventually, by January 2019, there will be five such pairs of matching TIPS trading simultaneously. These TIPS pairs provide us a unique opportunity to examine the liquidity features of the TIPS market after accounting for standard pricing characteristics.

One crucial distinction for our analysis is that only two characteristics distinguish the bonds in each TIPS pair: their coupon rates and their accrued inflation compensation, which reflects their aggregate inflation experience since issuance. The latter directly affects the value of the embedded deflation protection provided by these securities. Because all other aspects are exactly identical, these pairs provide an ideal natural experiment to study whether there is an on-the-run premium in the pricing of TIPS. We refer to the yield difference between the seasoned and the recently issued TIPS in our matched pairs as their on-the-run premium, although the newly issued 10-year TIPS in each pair go off the run, in that they are no longer considered the newest available, in July when a new 10-year TIPS is issued.

In principle, arguments can be made for and against the existence of an on-the-run premium for TIPS. The same reasons for its existence in the broader Treasury market could apply to the TIPS market; specifically, recently issued TIPS could be more desirable for certain transactions and therefore more liquid. Data on bid-ask spreads—the range between the asking and selling prices—on TIPS support this view. The spreads are systematically 30% to 50% higher for the seasoned security in each TIPS pair. Also, the matched TIPS pairs include newly issued 10-year TIPS bonds, which are the most liquid TIPS securities, as shown in Fleming and Krishnan (2012). On the other hand, TIPS are much less liquid than regular Treasuries. Ultimately, the size of the spread is an empirical question.

We begin our analysis with the observed differences in yields to maturity (YTM) for the 2015 and 2016 TIPS pairs based on data from Bloomberg, as shown in Figure 2. They are each positive on average, but only marginally so at 1.3 and 6.7 basis points, respectively. However, to account for the two adjustments discussed earlier, we estimate the joint CLR model of Treasury and TIPS yields on a rolling daily basis. The model has sufficiently small pricing errors, so we can adjust the data accurately for differences in coupon rates across securities and for the estimated values of their embedded deflation options. 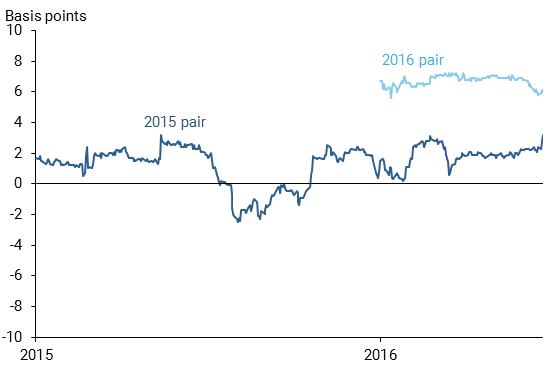 Adjusting for the YTM is particularly germane here since the general level of interest rates has declined notably over the past 10 years. As a result, the coupon rates on the seasoned 20-year bonds (2.375% and 2%) are much higher than the coupon rates on the matching recently issued 10-year bonds (0.25% and 0.625%). To account for this effect, we use the model’s estimated TIPS yield curve to generate the YTM values for the individual bonds based on the discounted values of their remaining cash flows, neglecting the value of their deflation protection. The difference between a pair’s YTM values mainly represents the differences in coupon rates and is shown as a yellow line in Figure 3 for the 2015 TIPS pair only. The differences are around 2 to 3 basis points in favor of the seasoned TIPS, which explains why the values are negative. The pattern for the 2016 pair (not shown) is similar. 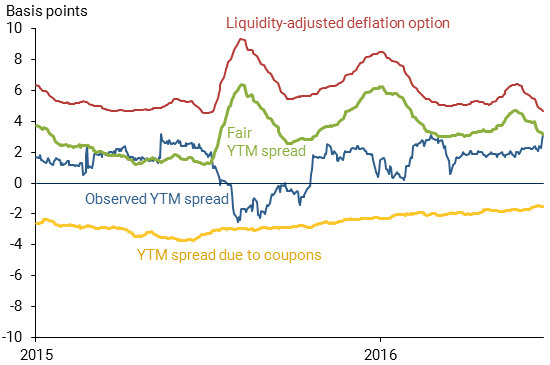 The next step is to account for the deflation protection options embedded in the TIPS contract. This option pays off if net inflation over the bond’s life is negative and ensures that, at a minimum, the TIPS bond pays back its original principal. The value of the deflation option within the seasoned TIPS is assumed to be zero since cumulative inflation over the past decade has been positive and cannot possibly be erased over the remaining time to maturity. Thus, we only need to account for the deflation option in the recently issued 10-year TIPS bonds. Following the CLR methodology, we estimate the option value using the model’s implied pricing dynamics. We then further control for the effects of TIPS market liquidity using regression analysis based on relevant market variables, such as the VIX, which reflects near-term market uncertainty in 1-month options on the Standard & Poor’s 500 stock index. Thus, the VIX is a measure of priced economic uncertainty that should correlate with the fundamental value of deflation options. Using data from 2005 through 2014, but excluding August 2011 through June 2013 due to unusually low interest rates that complicate the CLR model estimation, we estimate the regression and generate liquidity-adjusted TIPS option values for the 10-year TIPS bonds (red line).

Adding these two adjustments together, we get the net YTM spread that we would expect to prevail between the seasoned and newly issued bonds in each of our TIPS pairs under an assumption of fair pricing (green line). 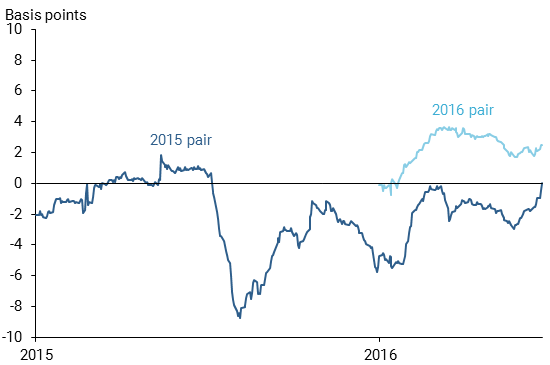 These small positive and negative values suggest that the TIPS market does not have an on-the-run premium like other Treasuries. However, there are several caveats to this conclusion. As Figure 1 shows, on-the-run premiums in the standard Treasury market have been below average during the period we study, so our results could simply be a reflection of that phenomenon. As data on new TIPS pairs become available, monitoring these spreads will become more straightforward. Another helpful development should be positive inflation in the years ahead, which will quickly reduce the deflation option values for the newly issued bonds to zero, leaving only the coupon adjustment to consider. While current evidence suggests that the TIPS market does not have an on-the-run premium, new data over the next few years will be able to answer this question more directly.

In this careful analysis of the yield spreads between TIPS that are identical except for a 10-year difference in their issue date, we find no material systematic differences in the yields of either security. For now, this suggests that TIPS do not have any significant on-the-run premium. This supports the hypothesis that on-the-run Treasury bonds have unique characteristics that provide investors with additional value. As more matching pairs of TIPS come on line in coming years, this type of analysis should provide further insights into the relative pricing patterns across securities in the TIPS market and in the overall Treasury market.