How Does Business Dynamism Link to Productivity Growth?

New businesses replacing older ones can be a visible sign of a community’s growth. On a larger scale, researchers consider this kind of turnover—one measure of so-called business dynamism—as an indicator of economic growth. Over the past few decades, the U.S. business environment has become less dynamic as measured by the frequency of business start-ups and closures and the associated creation and destruction of jobs. Some research argues that this decline in dynamism can explain the recent decline in aggregate U.S. productivity growth (see Davis and Haltiwanger 2014, Prescott and Ohanian 2014).

This concern sounds intuitive: Standard economic theories emphasize the role of creative destruction as a source of growth (Acemoglu 2008). That is, the economy grows because new businesses replace old businesses by creating better products or reducing production costs. Standard theories also emphasize the role of an increasing number of new goods or services, or expanding varieties. Intuitively, new products or services that drive economic growth are associated with startups. Under both frameworks, declining dynamism is worrisome because it signals a lower share of economic activity at new businesses, which could mean a drop in innovative activity and productivity growth. However, in this Economic Letter I describe why this focus on innovation among startups may not give enough credit to the contributions of existing businesses. Ultimately, the link between business dynamism and productivity growth is far more subtle.

Secular trends in dynamism and productivity do not match

There are many measures of business dynamism, including the commonly used gross entry and exit rates of firms, shown by blue and green lines in Figure 1. In the late 1970s, new business starts accounted for about 15% of existing U.S. businesses each year. In recent years that share has fallen below 10%. The rate of firms going out of business has also declined, but by a smaller amount, from about 10% per year in the 1970s to about 8% per year now. These declines are widespread and not heavily concentrated in particular industries or geographical areas (see, for example, Decker et al. 2014 and Davis and Haltiwanger 2014). 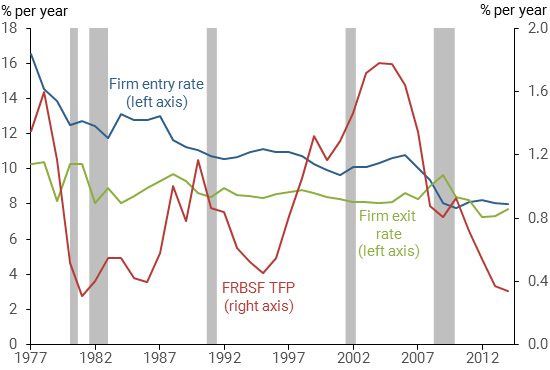 However, aggregate productivity growth has followed a different path than start-up activity. Figure 1 displays a data series for total factor productivity (TFP) growth (red line), measured without adjusting for the utilization rate using the method of Basu, Fernald, and Kimball (2006); see the San Francisco Fed’s Research data page for more information on their TFP adjustment method. In the figure, TFP growth is averaged over eight-year periods to highlight the secular movements over time. The information technology revolution in the late 1990s raised the rate of productivity growth well above that in the early 1980s, even though firm entry and exit rates were lower. Secular trends in business dynamism and productivity growth simply do not match well. This disconnect is also evident using other measures of productivity growth.

One reason for the disconnect between business dynamism and productivity is that existing businesses often innovate and create additional product variety. For example, Intel and Nvidia create faster processors every year. Also, by opening new stores, Walmart expands the variety of locations where consumers can shop. Recent studies by Garcia-Macia, Hsieh, and Klenow (2016) and Aghion et al. (2016) find that innovation by existing firms contributed more to productivity growth than did innovation by entering firms. This suggests that new firms may not be as critical to productivity growth as is commonly believed.

The market share growth of surviving firms—that is, the growth in their share of the total volume of sales in the market—is one way to gauge how much they contribute to productivity growth, versus the contribution of new firms that is reflected in business turnover. The market share of a firm is measured as the sales of that firm as a share of total sales in its product market. For a given degree of product quality, firms that sell at a cheaper price generally have a higher share than firms that charge a higher price. Under the reasonable assumption that lower-priced firms have higher productivity, the market share of a firm tells us how productive it is relative to the rest of the firms in the economy.

Directly measuring market shares for firms is difficult because the required sales and revenue data are not generally available for new firms. However, because higher sales generally correlate well with a larger workforce, we can use readily available data on employment counts to infer market share. Figure 2 displays the rates of job creation by firm entries (blue line) and job destruction by the firm exits (green line), as well as their net contribution to job gains (red line). This series is another commonly used indicator of declining dynamism. The rate of job creation by new firms in a year is defined as the employment at new firms divided by total employment. The remaining employment in the market is attributed to existing firms. The rate of job destruction by exiting firms in a year is the employment of firms that left the economy since the year before as a share of total employment the year before. The remaining employment in the prior year is attributed to surviving firms. Therefore the difference between the job creation rate by new firms and job destruction by exiting firms yields the change in employment share for surviving firms. This is a measure of surviving firms’ relative productivity growth. 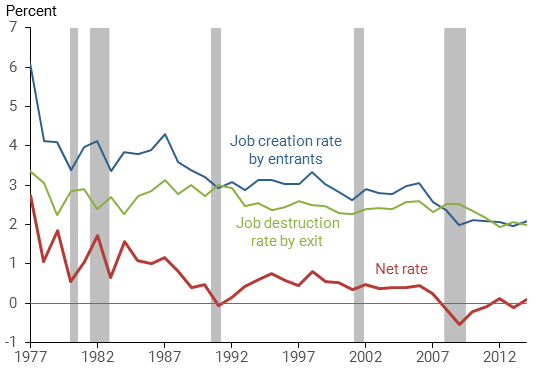 Figure 2 shows that employment at new businesses in the 1980s was around 4% of total nonfarm business employment. The current share is about half that, around 2%. Similarly, in the 1980s about 3% of jobs were destroyed due to firms closing down. That share has declined by a third to about 2% in recent years. The difference between the employment share of entering firms and exiting firms was well below 1% per year on average over the sample time frame and not much above that even during its high point in the late 1970s. In other words, the market share of surviving firms does not change significantly from year to year.

The logic laid out in the preceding paragraphs implies that the average surviving firm is nearly as innovative as the average entering firm. Surviving firms outnumber newly created firms by more than eight-to-one. Furthermore, the net employment changes indicate that existing firms are nearly as innovative as new firms. Combining these two ideas suggests that surviving firms contribute more to aggregate productivity growth than entering firms. In short, declining business turnover is not strongly tied to overall productivity growth, as some theories would suggest, because that growth is largely driven by existing firms.

Since the late 1970s, the U.S. economy has steadily become less dynamic. New business formation has declined, as has the number of jobs those new firms create relative to the rest of the economy. Both of these trends raise concerns for productivity growth. Counter to this concern, however, data on business entries and exits show that long-term trends in business dynamism do not match trends in productivity growth. In addition, the evidence suggests that existing firms contribute significantly to growth. In sum, focusing on the detrimental effects from fewer new businesses on aggregate productivity growth may undervalue the strong innovation that existing firms contribute to the economy.