The pace of business start-ups in the United States has declined over the past few decades. Economic theory suggests that business creation depends on the available workforce, and data analysis supports this strong link. By contrast, the relationship between start-ups and labor productivity is less well-defined, in part because entrepreneurs face initial costs that rise with productivity, specifically their own lost income from alternative employment. Overall, policies that incorporate improving labor availability may help to boost new business growth.

By many measures, the rate of U.S. business formation has declined over the past 30 years. This decline appears to be pervasive across industries and regions (Davis and Haltiwanger 2014). Considerable research has raised concerns that this may slow down long-run growth in the United States (see Decker et al. 2016 and Prescott and Ohanian 2014).

In this Letter, we examine the theoretical factors that determine the number of businesses in the economy: the size of the available workforce and the level of labor productivity. We compare predictions based on these factors with actual patterns of U.S. business formation. We find that population size is more important than productivity for explaining the number of businesses. This finding suggests that policies aiming to boost business formation are more likely to be effective if they also improve labor availability.

A theory of business formation

To think about how policies can boost business formation, it is useful to first understand conditions that affect the number of businesses in the economy. One common way of thinking about this in economics is the life cycle of businesses. This theory suggests that the decision of whether to operate a business depends on how potential costs compare with revenue.

The first type of cost is variable, meaning it increases with the size of the business. For example, raw materials and wages paid to employees are usually variable costs because they rise according to how much of its product the business can sell. The second type of cost is fixed and does not vary significantly with a business’s size. License fees are an obvious example. Others include certain capital expenses, such as the cost of the machines needed for production or the rent paid for the land or building. Less obvious fixed costs are the lost earnings that business owners give up by operating a business instead of working for someone else. Taken together, these fixed costs are essentially synonymous with start-up costs.

The other side of the equation in deciding to start a business revolves around demand for the product. To simplify, imagine that two businesses in a market each have a unique product. For example, Coke and Pepsi coexist because they are somewhat different and some customers prefer one to the other. Demand for a firm’s product depends not only on its price relative to competing products but also on the aggregate conditions of the economy. If the price of Coke increases more than Pepsi, some customers may switch to Pepsi and raise the relative demand for that product. The total demand for Coke and Pepsi, on the other hand, depends on the general economic conditions, such as the size of the population and the income of each person. All else equal, aggregate demand increases with population because more people means more customers. Demand also increases with income per person because each customer is likely to have more money to spend.

In this theory, the number of businesses in the economy adjusts through openings and closings such that, on average, gross profits equal fixed costs. What determines this level? Two factors that could determine business formation in the long run are the size of the population and labor productivity. A larger population increases the number of customers, which, all else equal, increases demand and thus encourages more businesses to form.

The natural follow-up question is whether fixed costs rise with productivity. Measuring fixed costs directly is difficult because they include forgone income that is not observed. A less direct but more feasible method is to use gross profits to proxy for fixed costs. Recall that, in the model, entry and exit of businesses adjust such that fixed costs equal average gross profits. Bollard, Klenow, and Li (2016) applied this indirect approach to the U.S. manufacturing sector using firm-level data from the U.S. Census Bureau. They examined the period from the late 1960s to the present and found that their proxy for fixed costs rises strongly with labor productivity. 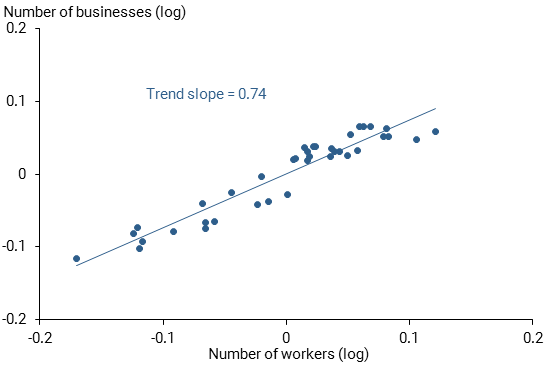 Figure 2
Number of businesses vs. workers across states, 2014 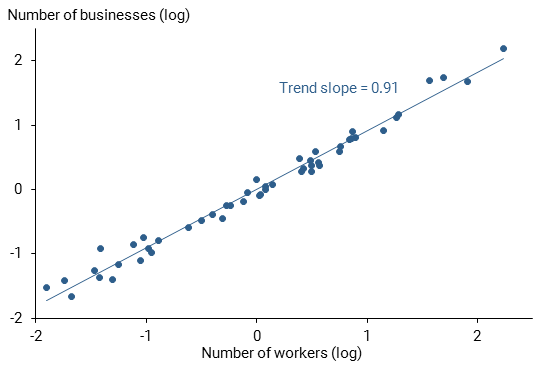 This finding may seem somewhat surprising at the state level, considering the often large differences in regulations and taxes between states. For example, California requires businesses to cover broader employment insurance than other states (U.S. Small Business Administration 2016). One would expect the broader requirement to raise the cost of doing business in California relative to other states, discouraging business formation. However, as surveyed by Hathaway and Litan (2014), there is no consensus among research papers on the relationship between state policies and business formation. Instead, similar to the relationship we show in Figure 2, they find that business start rates are higher in states with higher population growth rates.

Our analysis suggests these types of policies might be more effective if they were paired with workforce development programs. Increasing the labor supply and hence the supply of potential entrepreneurs can stimulate business formation by increasing demand without raising costs. Possible strategies could include encouraging more immigration, later retirement, or higher labor participation among women. Other strategies could involve increasing the pool of effective labor through education, as in the recent proposal by Federal Reserve Chair Janet Yellen (Yellen 2017).

In this Letter, we discuss how business start-ups are theoretically linked to the availability of labor and to labor productivity. Historical data appear to support the theory that the fixed costs of operating businesses generally rise with productivity in the United States, which suggests improving productivity is not particularly helpful for boosting new business formation. One potential explanation is that fixed costs include the labor costs of business founders. However, workforce availability has a strong link to business start-ups in historical data. This finding suggests that policies to stimulate business formation are likely to be more effective if they include strategies that expand the labor supply. Increasing the workforce could not only raise the supply of available entrepreneurs but could also raise the demand for more businesses.

Patrick Kiernan is a research associate in the Economic Research Department of the Federal Reserve Bank of San Francisco.