How Tight Is the U.S. Labor Market?

The latest jobs report showed an unemployment rate of 4.7% for February, according to the Bureau of Labor Statistics (BLS). This jobless rate is considerably lower than the historical average of 5.8% since 1948 and has fallen below its levels during the labor market peaks of 1979 and 1989 (Figure 1, blue line). The expectation that the rate will fall even further raises the possibility that the labor market will exceed the Federal Reserve’s goal of maximum employment and could push up wages and prices substantially. 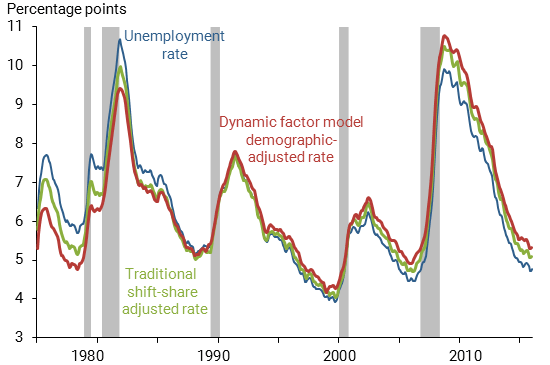 Using such comparisons of the level of unemployment over time to assess the amount of labor market slack can be problematic, however, because slow changes in the demographic composition of the workforce affect the aggregate unemployment rate. In particular, as the size and employment trends among different groups of workers change, comparisons across business cycles become increasingly difficult. Policymakers and researchers routinely adjust how they measure unemployment to account for such changes in the demographic composition of the labor force. In this Letter, we show that the standard approach to demographic adjustment—known as shift-share analysis—does not accurately capture the effect of demographics on unemployment. We use a novel adjustment method to correct for those shortcomings and find that the current unemployment rate is not unusually low compared with previous business cycle peaks.

The conventional approach to demographic adjustments

The green line in Figure 1 shows the result of this type of demographic adjustment. We split the labor force into 11 age/gender demographic groups and hold the labor force shares of each fixed at their 1976–2016 average value. This shift-share adjusted unemployment rate displays less of a downward trend than the published BLS unemployment rate, indicating that demographic changes have lowered the unemployment rate since the mid-1970s. But even with this adjustment, unemployment appears to be close to previous lows: As of February 2017 the shift-share adjusted rate stands at 5.0%—the same level as in the 1979 and 1989 labor market peaks (green line) and only one-tenth higher than the 2006 peak—which appears to confirm the initial impression of a tight labor market.

Issues with the conventional approach

To illustrate why a shift-share analysis does not properly correct for the effects of labor market changes related to demographics, we explore the effect of a specific ongoing shift in the U.S. labor market: Every year, a higher fraction of high school graduates enter college, which means they stay out of the labor force instead of joining the ranks of job seekers. We will refer to this sustained demographic shift as “delayed labor force entry.”

To see this, we need to understand the difference between a “stock” that measures a supply at a point in time, such as the unemployment rate, and a “flow,” such as the movement of workers between the labor force states of employed, unemployed, and out of the labor force or nonparticipation. Using a simple analogy, young workers’ unemployment rate—a stock—can be seen as the amount of water in a bathtub. If you turn on the tap and pull the plug, the level of water in the tub changes with the flow of water into and out of the bathtub. If the rate of water flowing into the tub slows by turning the faucet down, while the draining rate remains the same, the water level will go down. Similarly, if a higher fraction of high school graduates go to college instead of looking for a job, this would reduce the flow of young workers entering the pool of unemployment and thus lower the young workers’ unemployment rate.

The effects of demographics on unemployment since the mid-1970s 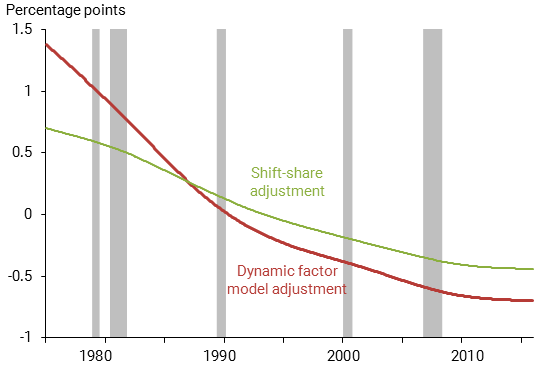 This finding raises an interesting follow-up question: Which demographic changes are responsible for the decline in unemployment since the mid-70s?

In Barnichon and Mesters (2016), we show that three demographic changes had roughly equal contributions to this decline: the aging of the baby boom generation, a trend decline in young workers’ propensity to join unemployment since the early ’80s, and a secular increase in women’s labor force attachment until the mid-90s.

We have already mentioned the first two phenomena. The last one was first documented by Abraham and Shimer (2001) and corresponds to a secular decline in the propensity of working women to leave the labor force, for instance, to raise children. This trend lowered women’s unemployment rate, because employed women are then less likely to re-enter the unemployment pool after a period of nonparticipation. Again, a conventional shift-share analysis would miss that channel entirely and thus would understate the effect of women’s stronger labor force attachment on aggregate unemployment. Thus, a shift-share analysis understates the effects of demographics because it does not take into account either the trend of fewer young workers entering the labor force or the lower propensity of women to leave employment, both of which lowered the overall unemployment rate.

Geert Mesters is an assistant professor at Universitat Pompeu Fabra and the Barcelona Graduate School of Economics in Barcelona.

Barnichon, Regis, and Geert Mesters. 2016. “On the Demographic Adjustment of Unemployment.” Unpublished manuscript.