China’s central bank frequently adjusts its reserve requirements for commercial banks as a way to stabilize economic fluctuations. These adjustments affect the overall credit supply but can also lead to the reallocation of credit and capital. Evidence shows that increases in reserve requirements raise off-balance-sheet lending, which typically benefits China’s more productive private sector, at the expense of on-balance-sheet loans to less productive state-owned enterprises. Under certain conditions, reserve requirements can be a useful additional policy instrument for improving resource allocations and also for macroeconomic stabilization in China.

Central banks in most countries require commercial banks to hold a minimum share of their deposit liabilities as risk-free claims on the central bank, a policy commonly referred to as reserve requirements. Required reserves primarily serve to limit risks to the banking sector, since they are safer than bank loans and tend to reduce the overall riskiness of a bank’s asset portfolio. However, because interest rates on those reserves are relatively low, increases in reserve requirements tend to reduce the profitability of formal bank lending activity relative to off-balance-sheet operations.

In China, changes in reserve requirements can have implications for the allocation of resources in the economy. Similar to other countries, required reserves held at China’s central bank—the People’s Bank of China (PBOC)—earn below-market interest rates, currently around 1.6% compared with the benchmark loan rate at commercial banks of around 5.1%. Under China’s existing financial system, state-owned enterprises (SOEs) enjoy favorable access to bank credit because of implicit and explicit government guarantees on their debt. These guarantees reduce SOE funding costs (see, for example, Song, Storesletten, and Zilibotti 2011) and thus encourage SOE activity. In contrast, the financing of privately owned enterprises (POEs) relies primarily on off-balance-sheet bank lending or shadow bank lending (Lu et al. 2015), which is not subject to reserve requirement regulations. As such, an increase in reserve requirements may reduce the share of SOE activity in China.

Since SOEs are on average less productive than private firms (Hsieh and Klenow 2009), the reallocation could make reserve requirement adjustments less effective. For example, tightening reserve requirements reallocates capital from SOEs to private firms, and such reallocation may raise overall productivity. Alternatively, if the PBOC cuts the required reserve ratio in order to stimulate the economy through credit expansion, any resulting reallocation of resources from the private sector to the state-owned sector could reduce aggregate productivity and therefore offset the expansionary effects from increased commercial bank lending. In this Economic Letter, we discuss some empirical evidence regarding these types of reallocation effects from changes in China’s reserve requirement policy. 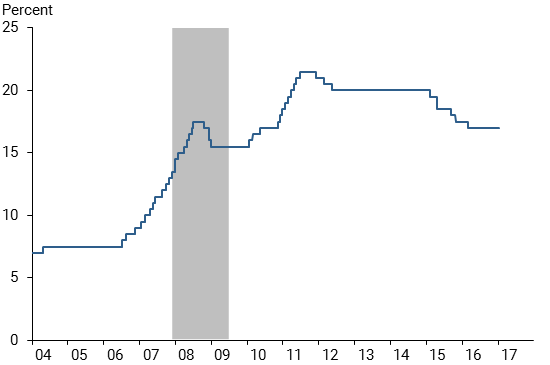 Chang, Liu, Spiegel, and Zhang (2017, hereafter CLSZ) examine the reallocation effects of changes in China’s reserve requirements using equity market data. Under China’s current regulations, a change in reserve requirement policy must not be signaled or leaked before the announcement. Although such changes are usually announced a few days before being implemented, they should affect firm equity returns through investor expectations. Thus, within a short window of time around the announcement date, changes in reserve requirement policy are likely to contain some surprise component independent of other macroeconomic news that can affect stock returns.

The reallocation mechanism implies that tightening reserve requirements should have a stronger adverse effect on SOEs than on private businesses because it raises relative SOE funding costs. Thus, one should expect SOE equity returns to be more sensitive to announcements of changes in reserve requirements than POE returns.

CLSZ perform a statistical analysis to examine this hypothesis. They relate the equity returns of a large number of publicly traded Chinese firms immediately before and after the announcement dates for changes in reserve requirements. Following Hsieh and Song (2016), CLSZ classify SOEs as those firms whose controlling shareholder—with 50% or more of total shares—is the government and designate the other firms as POEs. Their analysis adjusts for various factors that could concurrently influence returns on equities. They use daily data from 2005 to 2015, which covers the period of frequent and large adjustments in reserve requirements.

Over that period, they estimate that a 1 percentage point increase in China’s required reserve ratio would result in an annualized reduction in the relative cumulative SOE returns of about 33% within a narrow window of time of three days. This estimate is significant, both statistically and economically.

CLSZ also estimate the announcement effects for two periods, 2005–2008 and 2009–2015. There is reason to believe that the reallocation effect of changes in reserve requirements would be stronger in the latter period, when China’s government launched a large fiscal stimulus to combat the recessionary effects of the global financial crisis. The fiscal stimulus led to a rapid expansion in off-balance-sheet loans and other shadow banking activities. The stimulus program was announced in November 2008 and implemented in 2009–2010 and was worth 4 trillion yuan or about 11% of China’s annual GDP, with most spending concentrated on infrastructure investment (Bai, Hsieh, and Song 2016). Local governments needed to raise funds to finance new investment projects partly supported by the central government’s stimulus funds. Those investment projects were initially financed by bank loans. Concerned by excessive leverage, the PBOC reversed its expansionary monetary policy and tightened bank lending starting in 2011. Local governments responded by shifting financing investment from bank loans to nonbank funding such as municipal corporate bonds. The resulting demand for nonbank credit contributed to the surge in off-balance-sheet lending and shadow banking in general (Chen, He, and Liu 2017). The increases in off-balance-sheet lending also created an opportunity for capital to be diverted from SOEs to the private sector, since financing of POEs relies mainly on off-balance-sheet loans. Accordingly, the relative equity returns of SOE firms should become more sensitive to changes in reserve requirements during this period.

The estimation results confirm these findings. In the 2005–2008 pre-stimulus period, the announcement effects of changes in the required reserve ratio on the relative stock returns of SOEs is not significantly different from zero. However, in the 2009–2015 post-stimulus period, it becomes significantly negative and the point estimates are about twice as large in absolute terms as the overall estimates. These results suggest that SOE equity returns were more sensitive to changes in reserve requirement policy in the post-stimulus period that coincided with the rapid expansion of shadow banking activity.

The firm-level evidence on equity returns suggests that a tightening of reserve requirements would raise the funding costs for SOEs. The policy change should also reduce on-balance-sheet loans to SOEs, freeing up commercial bank capital for additional off-balance-sheet lending to POEs, as this activity is not subject to reserve requirements. On net, it should also reduce the share of SOE investment.

CLSZ confirm this second hypothesis using Chinese macroeconomic data. They perform a statistical analysis known as a vector autoregression that explains variations in the share of SOE investment as a function of its past values, as well as current and past surprises in other relevant variables, including the required reserve ratio, the three-month nominal deposit rate, and real GDP. The data are measured at a quarterly frequency and span the period from the first quarter of 1995 through the end of 2013.

Figure 2 shows the estimated responses of the share of SOE investment to a surprise increase in the required reserve ratio (solid line), along with the 68% confidence band (shaded area). The figure suggests that, following an increase in reserve requirements, the share of SOE investment falls significantly in the short run, as capital moves from the SOE sector to the private sector. Thus, both the firm-level evidence described above and this macro evidence are consistent with the reallocation channel associated with changes in China’s reserve requirements. 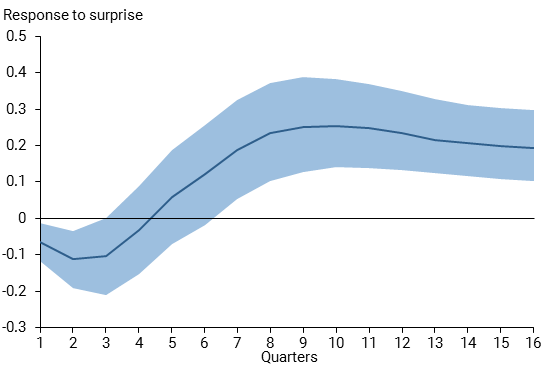 CLSZ consider the contributions of these additional channels for the implications of reserve requirement policy in a general equilibrium model of the Chinese economy. In the model, SOEs obtain financing through government-guaranteed on-balance-sheet lending by commercial banks, while POEs rely on off-balance-sheet bank lending. Given this environment, they determine how well-off a household in such an economy would be when the PBOC pursues “optimal policy”—that is, a policy that yields the most desirable feasible mix of output and inflation as viewed by a household in the economy.

The PBOC adjusts its required reserve ratio frequently to stabilize China’s domestic economy. Under China’s existing financial system, changes in the required reserve ratio can lead to the reallocation of resources between the state-owned and private sectors. The impacts of reserve requirement adjustments reflect these reallocations. For example, reducing the required reserve ratio to enhance credit extension and cushion a slowdown in the Chinese economy could also reallocate resources from the more productive private sector to the less productive SOE sector, which would partly offset the expansionary effects of the policy change. Balancing these reallocation effects is therefore key to successfully implementing changes in reserve requirements.