What’s Down with Inflation?

After eight years of economic recovery, inflation remains below the FOMC’s target. Dissecting the underlying price data by spending category reveals that low inflation largely reflects prices that are relatively insensitive to overall economic conditions. Notably, modest increases in health-care prices, which have been held down by mandated cuts to the growth of Medicare payments, have helped moderate overall inflation. Further slow growth in health-care prices is likely to remain a drag on inflation.

Since the end of the recession, inflation has been persistently below the Federal Reserve’s 2% target, with core personal consumption expenditures (PCE) prices rising on average about 1.5%. During this period, researchers have suggested a multitude of explanations for weak inflation, including low energy prices, a strong dollar, and a high degree of labor market slack. However, now that the labor market has fully recovered, the dollar has appreciated, and oil prices are no longer declining as rapidly, Chair Janet Yellen recently said that the reason why inflation remains low is a “mystery” (Yellen 2017).

In this Economic Letter, we examine the factors keeping inflation low by drilling down into inflation rates by spending category. We distinguish between categories where inflation has historically exhibited a procyclical relationship with overall economic conditions, moving in tandem with the economic cycle, and those categories where inflation has been acyclical, that is, driven by category-specific developments that are independent of the state of the overall economy. We show that procyclical inflation has steadily returned to its pre-recession level, in line with improvements in economic conditions and a tightening labor market. However, acyclical inflation has been persistently low, suggesting that idiosyncratic factors have helped hold down PCE inflation.

The well-known Phillips curve implies that inflation tends to move in the same direction as the overall economy. During good economic times, when the unemployment rate is low, high demand relative to supply causes businesses to raise prices. During recessions, when the unemployment rate is high and there is excess supply, businesses are less apt to raise prices, causing inflation to decline.

We drill down to the categorical level to assess whether inflation for individual categories responds to changes in overall economic activity. This allows us to examine whether some categories’ prices are more sensitive to business cycle conditions than others. For each category we estimate a basic Phillips curve relationship between the unemployment gap—the gap between the national unemployment rate and its long-term or natural rate—and changes in prices for that category, using data from 1985 through 2007. We then place a sector into one of two groups: procyclical or acyclical. If the sector’s inflation rate shows a negative and statistically significant relationship with the unemployment gap, we categorize the sector as procyclical. If the sector does not satisfy this criterion, we categorize the sector as acyclical.

We find that the categories exhibiting a procyclical relationship make up 42% of the PCE and include housing, recreational services, food services, and some nondurable goods. The acyclical categories, which make up the remaining 58%, include health-care services, financial services, clothing, transportation, and some other smaller categories. Based on this categorization, we create two distinct aggregate inflation series. These series are constructed as a weighted sum of inflation rates by sector, which is similar to the method the Bureau of Economic Analysis (BEA) uses to construct its overall PCE price index. While compositional changes can also affect inflation dynamics, these changes have had little impact on movements in the overall PCE index.

Figure 1 shows that the two inflation series occasionally move together. However, there are periods when they have diverged—in the late 1990s through early 2000s and again starting in 2014. In both of these periods, overall inflation was low—1.7% and 1.6%, respectively. In line with the historical relationship, procyclical inflation has steadily increased over the past few years as the recovery continued to gain steam and economic slack diminished further. However, acyclical inflation has gradually declined. 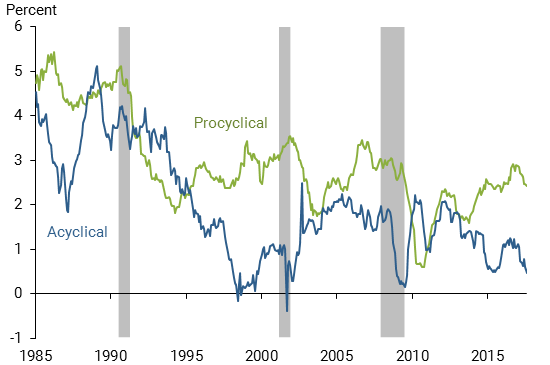 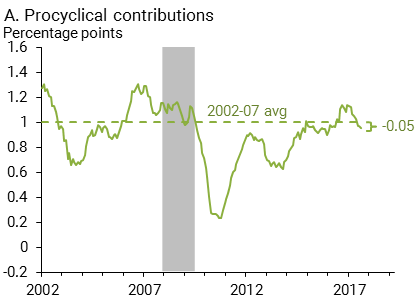 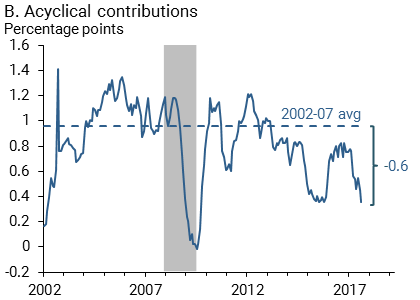 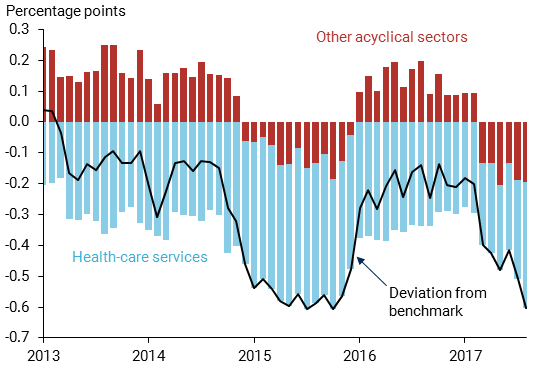 The figure shows that persistently low acyclical inflation since the recession has been driven by the substantial drag from health-care services. By contrast, the other acyclical categories have been bumping above and below their pre-recession levels. The very recent dip during 2017 in the acyclical group’s inflation contribution—and hence core PCE inflation in general—can be traced to a relative decline in the contribution from the acyclical categories that are not related to health care. We found this mainly reflects a steep decline in the prices of cellular phone services. 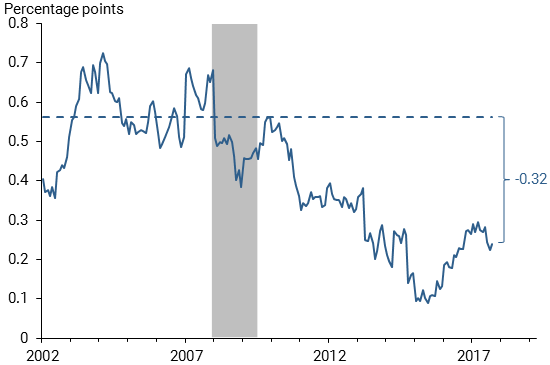 The Centers for Medicare and Medicaid Services (2017) recently published its inpatient Medicare payment schedule for fiscal year 2018. Payments are set to grow at 2.0% in this fiscal year, up from a rate of 0.9% in fiscal year 2016 and 0.6% in fiscal year 2017. Based on past estimates of how Medicare passes through to affect prices of other health-care services, this projected increase could translate into as much as a 0.3 percentage point increase in overall health-care services inflation, albeit only a 0.05 percentage point increase in core PCE inflation. Furthermore, some of the legislated payment growth cuts mandated by the ACA will expire after fiscal year 2019. However, on the whole it seems unlikely that health-care services inflation will reach its pre-recession level given that many of the Medicare payment growth cuts are permanent or set to continue for an extended period (Clemens, Gottlieb, and Shapiro 2016). For example, some spending will be permanently curtailed due to adjustments in economy-wide multifactor productivity and physician payments that are scheduled to stall between 2019 and 2025.

We attribute much of this persistent weakness in core PCE inflation to cuts in the growth of Medicare payments, which have translated into slower inflation throughout the health-care sector (Clemens, Gottlieb, and Shapiro 2014, 2016). While some cuts are expected to dissipate in the coming years, it seems unlikely that Medicare payment growth will return to its pre-recession level under current legislation. Slower growth in health-care prices is a welcome development for households and businesses that purchase it and for policymakers concerned about financing government health-care programs. However, a potential downside is the resulting diminished contribution to an overall inflation rate that has been below the Federal Reserve’s 2% target for a sustained period.

Tim Mahedy is an associate economist in the Economic Research Department of the Federal Reserve Bank of San Francisco.