Exchange rate stabilization or currency “pegs” are among the most prevalent interventions in international financial markets. Removing a peg to a safer currency can make the home currency more risky and less attractive to investors. When a country with market influence removes its peg from a safer country, the risk associated with holding either currency can be affected. Analyzing the effects of a scenario that changes a peg of the renminbi from the U.S. dollar to a basket of currencies suggests that China’s interest rates increase while U.S. interest rates decrease.

Many countries stabilize their exchange rate relative to some target currency. If a country removes this so-called peg to a safer currency, recent research suggests it will increase the risk and reduce the attractiveness of its currency to investors. Furthermore, if the country removing the peg has market power, its decision can affect the risk associated with holding either of the currencies involved. In this Economic Letter, we use this framework to analyze a decoupling of the renminbi (RMB) from the U.S. dollar and outline the effects on U.S. financial markets. We find that a switch from an RMB-U.S. dollar peg to a peg relative to a basket of currencies increases China’s interest rates while decreasing U.S. interest rates.

According to the International Monetary Fund’s annual reports on exchange arrangements (IMF 2016 and various years), China has changed its foreign exchange policy repeatedly over the past decades. The IMF reports that the policy of the People’s Bank of China (PBOC), the country’s central bank, was classified as a conventional peg to the U.S. dollar from 2003 to 2005; from 2006 to 2008, the renminbi was allowed to gradually appreciate under a policy classified as a crawling peg to the U.S. dollar; and between 2008 and 2010, it was stabilized relative to the dollar. In 2010, the policy changed to a “crawl-like arrangement” relative to the U.S. dollar. In 2015, the China Foreign Exchange Trade System (CFETS), a division of the PBOC, published an exchange rate index of 13 currencies in an effort to shift markets away from interpreting renminbi exchange rate movements as being driven only by its connection to the U.S. dollar (CFETS 2015). In 2016, the IMF changed China’s classification from an arrangement in which the flexibility of the renminbi is limited vis-à-vis the U.S. dollar to one in which the flexibility is limited relative to a group or “basket” of currencies.

Figure 1 shows the RMB-U.S. dollar exchange rate since 2003, with vertical lines indicating changes in China’s policy. One can see that exchange rates were stable during the so-called hard peg from 2003 to 2005; the renminbi gradually appreciated from 2005 to 2008; the currencies were repegged between 2008 and 2010. The volatility of its value subsequently increased as the PBOC abandoned its stabilization relative to the dollar. 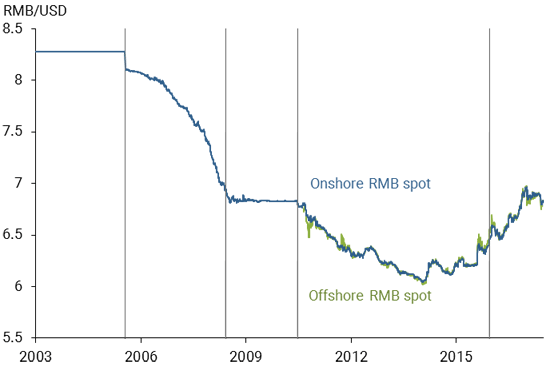 To maintain its past peg to the U.S. dollar, the PBOC had to intervene in foreign exchange markets. For example, if the PBOC had not intervened during times of excess global demand, market forces would have pushed the renminbi to a higher valuation than China’s exchange rate policy mandated. To avoid this unwanted appreciation, the PBOC needed to sell renminbi for U.S. dollars to satisfy the excess demand and thus prevent the appreciation of its currency.

Over the same period, China loosened its capital controls to make the renminbi more attractive for inclusion in the IMF’s Special Drawing Rights, an effort that succeeded in late November 2015. Since China is the largest trade partner of the United States and the renminbi is a frequent topic in policy discussions, it is important to consider the effects of changes in the PBOC’s policies. Here we focus on one channel, the variance of the exchange rate between the two currencies, through which China’s choice of exchange rate regime affects U.S. financial markets.

We evaluate the effects of a renminbi peg to a basket of currencies instead of the U.S. dollar through the lens of research that has recently emerged in international finance. According to this view, persistent differences in interest rates arise because of the riskiness of “carry trades.”

In a carry trade, an investor borrows money in a low interest rate currency and uses the borrowed funds to purchase assets denominated in the currency of a country with high interest rates. At the end of the investment horizon, the investor converts the proceeds back to the original funding currency to close the transaction. Thus, the investor speculates that the exchange rate will not move adversely enough to undo the positive returns from the spread in interest rates. Since exchange rates can move quickly and sharply, the carry trade entails a significant amount of risk. Historically, though, the strategy has led to high average returns.

Now suppose a pegging country loosens the peg of its currency, and the exchange rate fluctuates according to market forces. As a result, countries with safe haven currencies will, on average, have lower interest rates, according to recent research. Investors are willing to accept lower average returns in exchange for the safety of the currency. By contrast, in countries that have a higher exposure to global risk, investors demand a higher compensation through higher returns. Thus, countries with riskier currencies have higher interest rates. Hassan, Mertens, and Zhang (2016a) show that removing a stabilizing policy tends to increase the interest rate differential across countries and increase the interest rate in the country that was formerly using a peg to stabilize its currency.

To explore an example of this mechanism, we evaluate the effects on U.S. financial markets from the viewpoint of an investor who analyzes the scenario in which China stabilizes relative to the basket, as was announced in December 2015 (CFETS 2015, IMF 2016). In this scenario, the renminbi would decouple from the U.S. dollar and instead be pegged to a basket of currencies, of which the U.S. dollar makes up approximately one-third.

Previously, the PBOC stabilized the renminbi relative to the U.S. dollar. This peg decreased interest rate differentials between the two countries. By decoupling the two currencies, risk in their exchange rate would allow for a spread in interest rates. Using a basket peg rather than a dollar peg increases the variance of the real and nominal RMB-U.S. dollar exchange rate. Since the U.S. dollar is a safe haven currency, the change in policy would improve the attractiveness of U.S. assets and put downward pressure on U.S. interest rates. Conversely, by loosening the peg to the U.S. dollar, the renminbi no longer inherits the safe haven properties and becomes less attractive to international investors. As a consequence, China’s interest rates increase. As noted earlier, we focus on the effects arising from changes in the variance of the exchange rate, not its level. Resulting changes in interest rates are persistent as long as the policy that caused them remains in place. Even though capital controls in China might prevent foreign investors from taking advantage of the carry trade in onshore markets, the mechanics of the model apply to offshore trading where the PBOC needs to implement the peg.

We look deeper into the quantitative effects of a perceived change in policy in late 2015 that stem from an increase in the variance of the RMB-U.S. dollar exchange rate. The scenario involves the switch from the crawling peg regime relative to the U.S. dollar to a hard peg to the announced basket of currencies, which trade at a fixed ratio with the renminbi.

To assess the effect of the policy change on the United States, we use the model in Hassan et al. (2016a). It establishes a relationship that links the change in the U.S. real interest rate to the change in the strength of the stabilization. In terms of the model, the strength of the stabilization relative to the U.S. dollar switches from a hard peg to a peg of one-third strength, since this is the share of the dollar in the basket. The calculations from the model imply that nominal U.S. one-year interest rates decrease about 8 hundredths of a percentage point, or 8 basis points. We confirm this estimate by using the empirical relationships developed in Hassan et al. (2016b) and find almost identical results.

We chose the announced policy change in December 2015 as an event study, but China’s exchange rate policy continues to evolve. If there are further policy changes that affect the safe haven properties of the U.S. dollar, we can use the mechanism and model outlined in this Letter to analyze the effects on U.S. financial markets. Furthermore, since the majority of countries in the world stabilize their real or nominal exchange rate, the mechanism provided above can be applied broadly to analyze other exchange rate policies.

Recent research shows that the removal of a country’s peg to another currency tends to increase the interest rate differential between the two countries. When the country has market power, unpegging the currency affects the target currency. If the target currency is relatively safe, the removal of the peg will put downward pressure on its interest rate. Applying this framework to a perceived shift in China’s exchange rate policy in December 2015 shows that, by decoupling the renminbi from the U.S. dollar, the PBOC would modestly lower U.S. interest rates and make the U.S. dollar a safer asset from an investor’s perspective.