How Much Consumption Responds to Government Stimulus

What is the effect of government spending on private consumption? Estimates show that stimulus distributed through the American Recovery and Reinvestment Act had a large positive effect. Estimates from regional data suggest every $100 of stimulus generated an additional $18 within regions. Furthermore, by accounting for economic connections that spread the impact beyond regional borders, a new study finds that every $100 triggered an increase of $40 in overall private consumption in the economy.

In response to the severe recession of 2007–09, the U.S. government enacted the American Recovery and Reinvestment Act (ARRA) in February 2009. From 2009 to 2012, the ARRA injected $787 billion into the economy with a primary goal of creating new jobs and providing temporary tax relief during the Great Recession. The ARRA stimulus encompassed three components: tax benefits, social entitlements, and federal contracts. Under the federal contracts component, the government awarded $228 billion in contracts, grants, and loans across different sectors, such as education, transportation, infrastructure, and energy. For example, the awards in the transportation sector went toward building and maintaining highway and railway infrastructure and airports. The awards in the energy sector went to water and electricity infrastructure development and renewable energy programs. In the language of economics textbooks, these government contracts represent a temporary increase in government purchases of goods and services.

What effect does a $1 increase in government spending have on private consumption spending and, more generally, on the economy’s output? And how does government stimulus work? The answers to these questions are critical to our understanding of how the government can influence the macroeconomy, but researchers have not yet reached a consensus (Hall 2009, Ramey 2016, Wilson 2012). Analyzing the effect of such an economy-wide policy in the data is notoriously challenging because it is difficult to isolate the effect of a particular policy from other forces influencing the economy. Theoretical models also offer varying results depending on the assumptions used to construct them.

This Economic Letter describes our recent work with coauthor Bill Dupor combining empirical analysis with modeling tools to analyze the aggregate effect of government purchases under ARRA on private consumption and overall output (Dupor, Karabarbounis, Kudlyak, and Mehkari 2018). We start by using regional variation in government spending under the ARRA to estimate the effect on regional household consumption. We then calculate an aggregate response using a novel theoretical framework that carefully accounts for the estimates from the data.

We find the ARRA had a positive effect on private consumption and, consequently, output in the economy. In counties that received $100 more government stimulus per household, household consumption increased $18 on average compared with other counties. In addition, the $100 stimulus spread to other regions through economic linkages, increasing consumption even in regions that did not receive the stimulus. The resulting aggregate effect shows that private consumption spending increased $40 for each $100 increase in government spending, generating a large boost to the entire economy.

Approximately 95% of U.S. counties received at least one federal contract though the ARRA. The size of the stimulus varied substantially across locations even after accounting for county population. For example, Barbour County, WV, with a population of 15,000 received around $50,000 per person, while Johnson County, AR, with a population of 24,000 received less than $30 per person. In our empirical analysis, we use this variation across counties to estimate the relative change in household consumption in a county in response to an additional $1 of county-level government stimulus.

The main challenge in estimating the response to regional government spending is that areas that were hit harder during the 2007–09 recession—and thus already had relatively more depressed consumer spending—were more likely to receive larger amounts of stimulus under the ARRA. So, if an estimation does not account for such dependence of the government stimulus on the local economic conditions, it will tend to underestimate the actual effect. To overcome this challenge, we rely on variation in the portion of ARRA spending that was distributed based on factors independent of local economic conditions. For example, we focused on those Federal Transit Administration contracts that were awarded for public transit capital improvement based on population density or passenger miles.

The second source of our consumption data is the Federal Reserve Bank of New York’s Consumer Credit Panel/Equifax. The data cover all major categories of household debt, including auto loans, for approximately 10 million individuals. We construct individual-level spending on vehicles by measuring changes in auto credit balances from auto financing by banks and dealerships. We successfully verify that our measure of auto spending constructed from auto loans closely tracks the number of registered auto vehicles in the United States.

Figure 1 shows the relationship between government stimulus and private consumption. We estimate that a county that received $1 more government spending per household experienced an increase of $0.18 in total consumption spending on average compared with counties that didn’t receive the stimulus. Over half of that increase was through general retail spending (panel A), and the rest was through auto purchases (panel B).

Figure 1
Government spending and percent change in retail and auto spending, by county 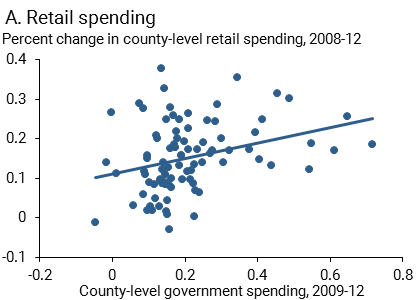 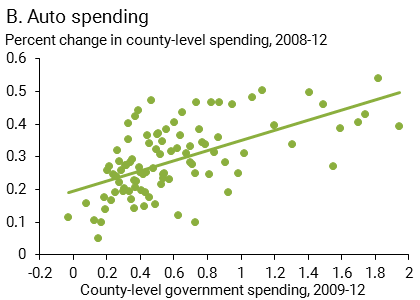 Challenges of inferring an aggregate from regional effects

The next challenge is, how can we translate the local consumption response to $1 of government stimulus into an aggregate effect? The estimates of the local effect do not directly sum up to the aggregate effect (Nakamura and Steinsson 2014, Chodorow-Reich 2017), because regions in the economy are interconnected via various production and other economic linkages. Consequently, an increase in government purchases in one region might lead to changes in demand for goods and consumption in connected regions. The estimate of the regional effect gives us information about how consumption in the region that received stimulus increased relative to any change in consumption in regions that did not receive the stimulus. One needs to estimate the magnitude of the spillover to understand the full effect.

Spillovers might result from changes in product and labor demand, trade between regions, movements of capital or labor between regions, and monetary and fiscal policy. Given the interconnectedness of the economy, it is very challenging to estimate the spillovers using spatial econometric techniques. To address this, we combine our empirical approach with a theoretical framework.

How much does regional stimulus affect the entire economy?

To calculate the change in aggregate consumption, we develop a novel theoretical framework to describe how an additional $1 of stimulus affects the economy.

We consider an economy consisting of multiple regions. Suppose the government increases its spending in one region. Since firms in that region use not only local intermediate inputs but also inputs from other regions, as demand in the region increases, the region’s firms require more inputs from both local and other regions’ suppliers. This need for increased input production can boost labor demand and wages and, in turn, consumption in the connected regions.

A few important forces translate the increase in wages into an increase in consumption in our framework. First, individuals differ in the wages they earn, and their wages change over time. A novel assumption in our framework is that not all individuals have access to financial markets to insure themselves against fluctuations in wages. Consequently, an increase in wages raises consumption, especially by low-wealth households that are mostly dependent on labor income and cannot borrow or save. Due to the differences in wages and inability to easily borrow and save, our framework successfully replicates the positive regional response to government stimulus that we estimate in the data, in contrast to other frameworks. Without these mechanisms, a temporary increase in wages would have a much smaller effect on consumption because individuals would have the option to save it for later.

Plugging our earlier estimates into our theoretical model, we find that an economy that generates a regional consumption response of $0.18 for every $1 of regional government stimulus generates a $0.40 consumption response in aggregate. That is, the regional stimulus propagates through economic linkages between regions to benefit the entire economy. Our estimate of an increase in total consumption by 1.4 is bigger than estimates from the time series literature (Hall 2009). It is also consistent with the traditional notion that the economic multiplier is bigger in downturns.

To summarize, we find that the government stimulus under the ARRA had a large positive effect on the economy. The government stimulus given to regions propagated through the entire economy via economic connections between regions. Our estimates suggest an output multiplier of 1.4, all else being equal. Our results suggest that government fiscal stimulus during severe economic downturns such as the Great Recession can have large effects on overall economic activity.

Marios Karabarbounis is an economist in the Economic Research Department of the Federal Reserve Bank of Richmond.

M. Saif Mehkari is an associate professor in the Economics Department of the E. Claiborne Robins School of Business, University of Richmond.