Valuation Ratios for Households and Businesses

Current valuation ratios for U.S. equities and household net worth are high relative to historical benchmarks. The cyclically adjusted price-to-earnings ratio reached its third highest level on record recently, and the ratio of household net worth to disposable income, which includes a broad set of household assets, stands at a record high. Such extreme values of these ratios have historically been followed by reversions toward their long-run averages. However, other current factors, such as low interest rates, caution against bearish forecasts.

Investors and policymakers have been concerned at various times about whether the stock market is overvalued. On December 5, 1996, then Fed chair Alan Greenspan introduced a now famous term when discussing this: “But how do we know when irrational exuberance has unduly escalated asset values, which then become subject to unexpected and prolonged contractions as they have in Japan over the past decade?” (Greenspan 1996).

Shortly before Greenspan’s speech, John Campbell and Robert Shiller had testified to the Federal Reserve Board of Governors regarding their careful analysis of the relationship between high levels of stock valuation ratios and the long-run outlook of the stock market (later published in Campbell and Shiller 1998). Since then, researchers have closely watched the cyclically adjusted price-to-earnings (P/E) ratio to measure the outlook for equity markets. In this Economic Letter, we update the Campbell-Shiller analysis for current P/E ratios for equities and compare our findings with estimates using a broader set of assets. While experience suggests that the recent high P/E ratio should be expected to revert toward its historical average, we discuss reasons why current circumstances might be special.

Recent developments and the predictive power of P/E ratios

Shiller’s measure of the P/E ratio is defined as the inflation-adjusted, or real, Standard & Poor’s 500 index value divided by a 10-year average of real corporate earnings. This ratio currently stands above 30, which is substantially higher than its historical average. Figure 1 shows that the P/E ratio appears to fluctuate around an average of about 17, with swings below 5 and up to almost 45. In the decade preceding the Great Depression, this ratio increased six-fold. From 1929 to 1932, a sharp contraction of prices essentially eliminated these gains. The next major increase occurred in the 1990s during the dot-com boom. By 1996, the valuation ratio was approaching the levels reached immediately before the Great Depression. In the years after Greenspan’s speech, the ratio climbed to a record high of almost 45 and once again reversed toward its average. In contrast to these major financial and economic events, there was no major run-up in this valuation measure prior to the Great Recession. 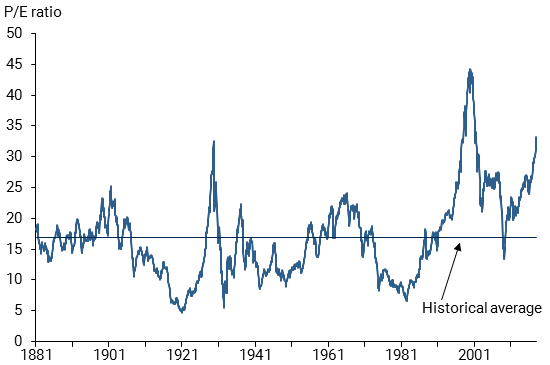 The tendency of the P/E ratio to revert to its average suggests low returns after high valuations. Following Campbell and Shiller (1996), we analyze the relationship between the P/E ratio and equity price growth over the 10 years since their study was published. Figure 2 updates their analysis. We plot each month’s data according to its P/E ratio on the horizontal axis and the corresponding real equity price growth over the following decade on the vertical axis. Red dots represent data that were available in 1996 when Greenspan remarked on irrational exuberance, and the blue dots capture the relationship since the 1996 briefing. The red and blue lines represent the best-fit lines through these two samples, respectively, and the black line is fit to the entire sample. 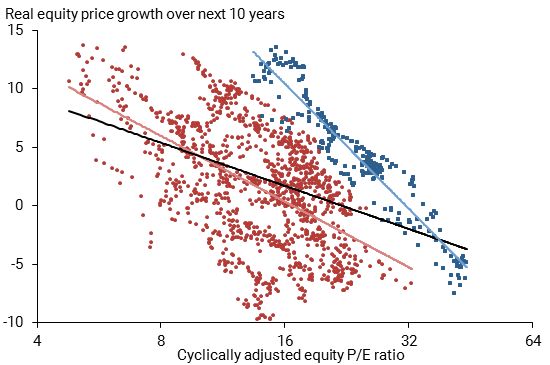 The P/E ratio predicts, on average, a poorer stock market outlook following high current valuations. When Alan Greenspan gave his speech, the P/E ratio stood at 27.6 and the red trend line predicted a poor outlook for the stock market—roughly a 4% decline over the following 10-year period. As it turned out, the stock market grew by 4% annually over the following 10-year period. Months later, however, the Great Recession depressed real equity valuations to lower levels than in 1996.

The measurement of the relationship between P/E ratios and subsequent real equity price growth changes over time. Adding data since 1996, the relationship between the P/E ratio and real equity price growth has become weaker, as seen by a flattening of the black line compared with the red line. Hence, increases in the P/E ratio suggest smaller expected decreases in future equity prices than previously estimated. We find that the current P/E ratio predicts approximately zero growth in the price of equities over the next 10 years, in contrast to the slightly negative outlook predicted by data available to Greenspan in 1996.

Interestingly, the data in the subsample from December 1996 through 2017 provide a better fit than if the entire sample is used. The trend line in the data since 1996 (blue line) is shifted to the right with a higher intercept and steeper slope than previous estimates. Taken together, these changes mean that deviations in the P/E ratio from its average result in more variation in real earnings growth than earlier in the sample. We also see that, despite being at a historically high level, recent data suggest a less bearish outlook than one would expect from using data over the entire sample. However, to get the best possible forecast, it is informative to use all of the available data for the relationship between the P/E ratio and real equity price growth, as reflected in the black line.

How worrisome are the currently elevated levels of the P/E ratio? On the one hand, high valuation ratios tend to predict low future price growth. Furthermore, relatively low expectations of economic growth provide an argument against high price levels. On the other hand, some other current circumstances could argue against predictions of a sharp reversal and low future returns. The low level of long-term interest rates relative to historical standards supports a higher level of the P/E ratio (see Lansing 2017). Lower interest rates imply a lower discounting of future corporate earnings and thus high equity prices. Furthermore, several models suggest that the decline in interest rates is due to persistent factors that are likely to keep the discount rate low in the future (Holsten, Laubach, and Williams 2017). At the same time, the low interest rates have been accompanied by low volatility in financial markets that puts more upward pressure on valuations. Additionally, the recent values of 10-year average earnings capture the weak performance of businesses during the Great Recession and the subsequent recovery. In the next couple of years, these observations will be dropped from the calculation and replaced by years with stronger earnings. Taken together, while the statistical analysis paints a poorer outlook of future stock valuations, there are reasons to believe that current circumstances are special.

P/E ratios have proven to be a useful tool to capture the dynamics of equities, but other asset classes do not always move in sync with them. For example, the Great Recession could not have been predicted from the P/E ratio, even though it was a large financial and economic event. To develop a better understanding of overall asset prices, we analyze developments in the ratio of household net worth to disposable income.

Ratio of household net worth to disposable income

The net worth-to-income (NW/Y) ratio—defined as household assets net of liabilities divided by personal disposable income—provides a valuation metric for a broad set of assets including debt, equity, and real estate weighted by the proportion in which they are being held by households. Similar to the P/E ratio, this ratio generally tends to revert toward its historical average and does not remain at extreme values, either high or low, for prolonged periods. As shown in Figure 3, the NW/Y ratio increased notably during both the dot-com boom and the housing boom and sharply contracted during the subsequent downturns.

Figure 3
Ratio of household net worth to income 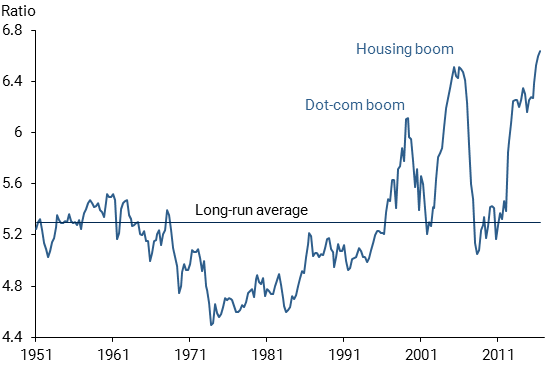 Currently, the NW/Y ratio stands at a record high of about 6.7, compared with its average of 5.3 over a data sample starting in 1951. Figure 3 shows three episodes of high valuations: the dot-com boom in the late 1990s, the housing boom, and the current effects of the recent bull markets on various asset classes. As shown earlier, the P/E ratio reached record highs during the dot-com boom but failed to capture asset valuations that contributed to the housing crisis. In contrast, the NW/Y ratio exceeded its late 1990s level prior to the 2007 financial crisis, and in the current recovery it stands higher than the values observed in either of those two earlier booms. Consistent with the P/E ratio, the NW/Y ratio was at historically low levels in the 1970s to mid-1980s.

Figure 4
Household net worth and components of disposable income 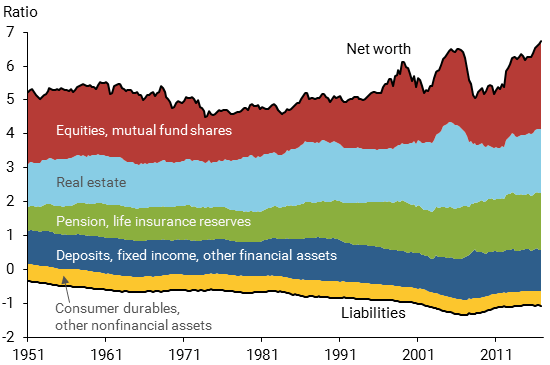 The difference between the upper and lower bounds are assets relative to income broken into components, with each colored region representing an asset class’s valuation as a fraction of income. Prices of assets exhibit larger variance than liabilities and are thus the main driver of fluctuations in the NW/Y ratio. Furthermore, the variation in prices of equities and real estate drive the majority of the variation in net worth to disposable income over the entire sample.

Consistent with conventional wisdom, Figure 4 shows that the dot-com boom in the 1990s was primarily driven by a large increase in the prices of equities. The Great Recession of 2007–2009, however, was preceded by a run-up in real estate valuations, while equities contributed only to a minor degree. In contrast to those peaks, the currently elevated level of the NW/Y ratio is supported by multiple asset classes—equities, real estate, and pension and life insurance reserves. At the same time, households have decreased their level of liabilities relative to income since the financial crisis. This illustrates that the increase in asset prices is not being driven by household leverage.

Current valuation ratios for households and businesses are high relative to historical benchmarks. Extending the analysis by Campbell and Shiller (1996), we find that the current price-to-earnings ratio predicts approximately zero growth in real equity prices over the next 10 years. Since the Great Recession, multiple asset classes—real estate, pensions, life insurance reserves, and equities—have been the main contributor pushing the household net worth-to-income ratio to a record high. Historically, these ratios have not remained elevated for prolonged periods, and peaks have been followed by reversions toward their long-run averages. At the same time, the present circumstances, including low current and expected interest rates, may warrant caution against bearish forecasts.

Thomas Mertens is a research advisor in the Economic Research Department of the Federal Reserve Bank of San Francisco.

Michael Tubbs is a research associate in the Economic Research Department of the Federal Reserve Bank of San Francisco.

Greenspan, Alan. 1996. “The Challenge of Central Banking in a Democratic Society.” Remarks at the Annual Dinner and Francis Boyer Lecture of The American Enterprise Institute for Public Policy Research, Washington, DC, December 5.