Many investors have turned to emerging market bonds seeking higher returns in the current low interest rate environment. This raises a natural question about the potential for financial instability if investors choose to sell off those bonds quickly. Studying how changes in foreign holdings of Mexican government bonds known as bonos affected their liquidity premiums provides an assessment of the risks and benefits from foreign investment in an emerging economy. Results show that the larger foreign market share of Mexican sovereign bonds tends to increase their liquidity risk premium.

The current low level of interest rates in global financial markets has sent investors around the world in search of higher yields. Many have turned to emerging markets to purchase government bonds, also known as sovereign debt. In light of the history of sovereign credit crises in emerging markets, especially in Latin America, significant debt purchases from investors outside the border could pose some risks to financial stability. That risk could be exacerbated if the markets were to reverse too quickly, say in response to interest rate increases from the normalization of monetary policy in advanced economies in coming years (Avdjiev et al. 2017). Hence, it seems warranted to study the role of foreigners in emerging markets.

In this Letter, we focus on the effects that changes in foreign holdings have on the liquidity premiums of government bond prices in Mexico. To do so, we use a yield curve model of Mexican government bond prices that accounts for liquidity risk to measure their embedded liquidity premiums, which have grown in recent years. We find that increases in the share of Mexican sovereign bonds held by foreigners tend to raise the liquidity premiums of these assets. The large increase in the share of foreign holdings during our sample period implies that foreigners have played a significant role in raising liquidity premiums. This might be because foreign investors buy and hold the bonds rather than actively trade them, thus reducing the amount of bonds available for sale or purchase on any given day. However, as long as the increased liquidity premium compensation is commensurate with the risk of a major market sell-off, our findings suggest this may not pose a material risk to financial stability at this point.

We use data from reports of foreign and domestic holdings of Mexican sovereign debt securities that the Bank of Mexico requires from financial intermediaries. The reports of daily data have been collected since 1978 as a way to track market activity in the Mexican sovereign bond markets.

A key strength of the data is that they cover any changes in Mexican sovereign debt holdings by either domestic or foreign investors. For each transaction, the reporting forms also identify the type of Mexican government security. Therefore, we are able to concentrate specifically on holdings of standard Mexican fixed-coupon government bonds denominated in Mexican pesos, known as bonos. We use the observations from the last day of each month starting in June 2007 to align with the timing of our bond price data. 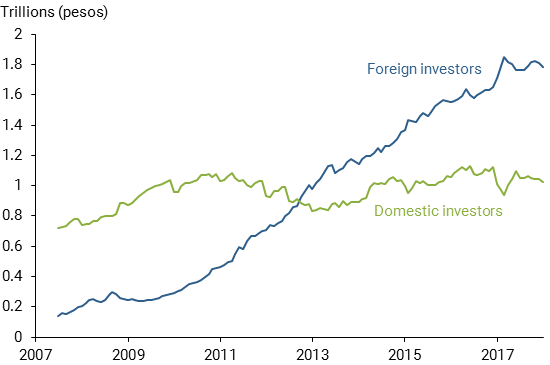 A liquidity-adjusted model of bond yields

We begin our analysis by measuring the price discount that bonos investors demand for assuming liquidity risk—that is, the risk that they may be forced to rapidly sell bonds back to the market before maturity at significantly depressed prices.

To estimate the liquidity premiums embedded in bond prices, we use a standard yield curve model taken from Christensen, Diebold, and Rudebusch (2011), augmented with a liquidity risk factor as described in Andreasen, Christensen, and Riddell (2018). The liquidity risk factor is identified from its unique loading for each individual bond. This loading assumes that, over time, an increasing proportion of any bond’s outstanding notional amount will be locked up in buy-and-hold investors’ portfolios and unavailable for trading. Given forward-looking investor behavior, this lock-up effect implies that a particular bond’s sensitivity to the market-wide liquidity factor will vary depending on how seasoned the bond is and its remaining time to maturity. By observing prices from a cross section of Mexican bonds that have different times to maturity and age characteristics, we can identify the liquidity factor. The remaining factors in the model represent general patterns in the level and shape of the yield curve that would prevail in a world without any frictions to financial market trading.

To estimate the model and identify the liquidity factor, we use bond prices at the end of each month from June 2007 to December 2017, available on Bloomberg. For maturing bonds, we end the data three months before expiration to avoid erratic prices close to maturity. 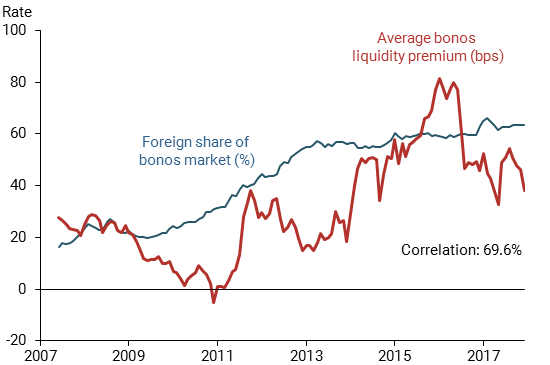 The estimated liquidity premium is relatively quite large, averaging 0.32%. For comparison, the liquidity premium advantage of newly issued 10-year U.S. Treasuries over comparable seasoned securities has averaged less than 0.15% over the past two decades (Christensen, Lopez, and Shultz 2017). Hence, liquidity risk is an important component in the pricing of Mexican government bonds. We also see significant variation around a general upward trend during our sample period, with notable spikes in the summer of 2011 and spring of 2014 and a persistent decline in the fall of 2016. The empirical question we are interested in is to what extent this variation can be explained by changes in the foreign-held share of the Mexican bonos market, shown as the blue line in Figure 2.

To model the variation of our liquidity premiums, we run a statistical comparison known as a regression to show how the liquidity premium series varies relative to the share of foreign holdings of bonos. In addition, we use a number of controls that are thought to matter for bonos market liquidity specifically or for bond market liquidity more broadly. These variables include oil prices, an index for emerging market sovereign bonds, the year-over-year change in the Mexican consumer price index, the five-year credit default swap (CDS) rate for Mexico, a measure of stock market uncertainty (VIX), and the yield difference between seasoned “off-the-run” U.S. Treasury securities and the most recently issued “on-the-run” U.S. Treasury security of the 10-year maturity mentioned earlier.

The regression results reveal that increases in the share of foreign holdings of Mexican bonos are significantly positively correlated with changes in the bonos liquidity premiums. This holds true whether or not we include the extra control variables. In terms of magnitude, the results imply that a 1 percentage point increase in the foreign market share raises the liquidity premium 0.01% or 1 basis point. Given that the foreign share has increased more than 40 percentage points between 2010 and 2017, our results suggest that the large increase in foreign holdings during our sample period has played a significant role for the upward trend in the liquidity premiums in the Mexican bonos market since then and raised them as much as 0.4%.

So why would liquidity premiums in this market go up in tandem with the foreign-held share? Within our model, this pattern could be explained by foreign investors in the Mexican sovereign bond market using passive buy-and-hold strategies to a greater extent than domestic investors, which would reduce overall market activity.

Another potential explanation is that investors may expect that the probability of a major sell-off has increased as foreign holdings of Mexican government debt have grown. This may be more likely as the United States begins to normalize monetary policy and raise its related interest rate. Anticipating such interest rate increases would seem like a justifiable concern, and demanding higher liquidity premiums would be a potential consequence. According to this explanation, our results would imply that investors are being compensated for the added liquidity risk in case these flows reverse in coming years. However, even if the flows reverse, as long as the increased compensation is commensurate with the risk of such events, the expanded role of foreigners may not pose a material risk to the financial stability of the Mexican government bond market at this time.

An important caveat to any conclusion is that our sample covers only a period when foreign capital has been flowing into the Mexican sovereign bond market. Thus, we have not been able to model how liquidity would vary in an environment of declining foreign supply of funds to the Mexican bond market. More broadly, the analysis presented in this Letter should be viewed as a first step in connecting capital flows to liquidity premiums and financial stability assessments in emerging markets.

In this Letter, we analyze the relationship between foreign holdings of Mexican government bonds and the premiums investors demand for assuming their liquidity risk. Our results show that increases in the share of foreign holdings tend to push up liquidity premiums in the bonos market. Although foreign holdings of Mexican bonos have increased significantly in recent years, which has most likely contributed to rising liquidity premiums, this in itself may not pose a risk to financial stability. It depends on whether the uptick in liquidity premium compensation is adequate relative to the underlying risk of any major bond sell-off in coming years. More broadly, this type of research may shed light on the important role that foreign investors play for the stability of financial markets in emerging economies.

Eric Fischer is a quantitative risk specialist in the Financial Institution Supervision and Credit Division of the Federal Reserve Bank of San Francisco.