Since late 2015, growth in real GDP has consistently exceeded that in real GDI, a prominent alternative measure of aggregate output, with an average difference of about 0.65 percentage point. Is real GDP overstating the expansion? One way to address this question is by comparing the accuracy of these measures in forecasting a benchmark measure of economic activity, the Chicago Fed National Activity Index. The comparison suggests that GDP consistently outperforms GDI in predicting recent real economic activity. Therefore, the weaker GDI growth does not necessarily indicate slower economic growth.

Two common measures of overall economic output are gross domestic product (GDP) and gross domestic income (GDI). GDP is based on aggregate expenditures, while GDI is based on aggregate income. In principle, the two measures should be identical. However, in practice, they are not. The differences between these two series can arise from differences in source data, errors in measuring their components, and the seasonal adjustment process.

In this Economic Letter, we evaluate the reliability of GDP relative to two alternatives, GDI and a combination of the two known as GDPplus, for measuring economic output. We test the ability of each to forecast a benchmark measure of economic activity over the past two years. We find that GDP consistently outperforms the other two as a more accurate predictor of aggregate economic activity over this period. This suggests that the relative weakness of GDI growth in recent years does not necessarily indicate weakness in overall economic growth.

Discrepancies between GDP and GDI

The differences between these two series can be large. For example, in the last two quarters of 2007, inflation-adjusted or “real” GDI was declining whereas real GDP was still growing. The year-over-year growth rate of GDP exceeded that of GDI by almost 2.6 percentage points. Over long periods, however, final measures of growth in GDP and GDI tend to yield roughly equivalent assessments of economic activity. Since 1985, real GDP grew at an average annual rate of about 3.98%, while real GDI grew at a similar average rate of 4.02%.

Since late 2015, the two series have diverged, with real GDP growth consistently exceeding real GDI growth (Figure 1). The differences in growth are significant in this period. For example, if we used GDI growth to assess overall economic activity since July 2015, then the size of real aggregate output by the end of 2017 would be $230 billion smaller than if GDP growth were used. This divergence between the two sends mixed signals regarding the strength of recent economic activity. 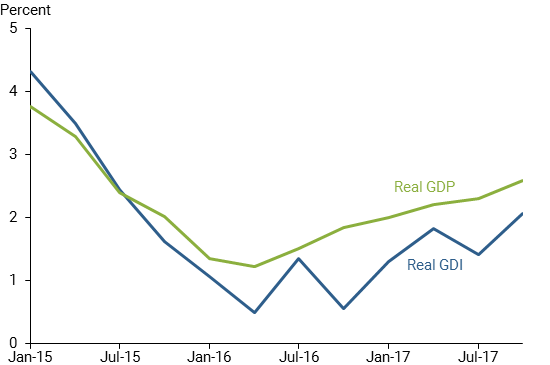 Researchers often debate which of these series measures economic activity more accurately. Nalewaik (2012) argues that GDI outperforms GDP in forecasting recessions. GDI does appear to exhibit more cyclical volatility than GDP. One reason may be that GDI is more highly correlated with a number of business cycle indicators, including movements in both employment and unemployment (Nalewaik 2010). On the other hand, the Bureau of Economic Analysis has resisted this conclusion, arguing that GDP is in general based on more reliable source data than GDI is (Landefeld 2010).

To evaluate the relative reliability of GDP versus GDI for measuring economic output, we compare their abilities to forecast a benchmark measure of economic activity. We focus on the Chicago Fed National Activity Index (CFNAI) as the benchmark, since it is publicly available. The CFNAI is a monthly index of national economic activity, generated as the common component of 85 monthly series in the U.S. economy. These underlying series include a wide variety of data covering production and income, employment and unemployment, personal consumption and housing, and sales and orders. The CFNAI has been shown to help forecast real GDP (Lang and Lansing 2010). We use the CFNAI as a benchmark activity indicator to evaluate the relative forecasting performances of GDP and GDI and their combinations. Since the discrepancy between these two series has persisted for several years, we focus on the final releases of the GDP and GDI series.

Some have argued that, because the GDP and GDI series contain independent information, it may be preferable to combine the two series into a single more informative activity indicator. One series that uses such a combination is the Philadelphia Fed’s GDPplus series, which is a weighted average of GDP and GDI, with the weights based on the approach described by Aruoba et al. (2016). As a weighted average, GDPplus indicates activity levels between the two individual series. We therefore also consider the forecasting performance of the GDPplus series over this period of extended discrepancy between reported GDP and GDI growth.

To confirm the accuracy of our approach, we repeated our investigation with two alternative series constructed using methodologies similar to the CFNAI. The first alternative is an aggregate economic activity index (EAI) we constructed by extracting the common components of 90 underlying monthly time series. The EAI covers a broader set of monthly indicators than the CFNAI, since we also include information from goods prices and asset prices.

The second alternative indicator we considered is an activity index constructed by Barigozzi and Luciani (2018), which we call the BL index. Like our index, the BL index includes price indexes and other measures of labor costs. The authors base their estimates on the portions of GDP and GDI that are driven by common macroeconomic shocks under the assumption that they have equivalent effects on GDP and GDI. This restriction implies that deviations between GDP and GDI are transitory, and that the two series follow each other over time.

The EAI and the BL index are both highly correlated with the CFNAI and thus yielded similar conclusions. We describe the source data and our methodology for constructing the EAI as well as the analysis using both it and the BL index in an online appendix.

To examine the relative performances of GDP, GDI, and GDPplus for forecasting the CFNAI, we first estimate an empirical model in which the CFNAI is related to four lagged values of one of these measures of aggregate output. Ideally, we would have used the full sample of postwar data in our model, but there are some structural breaks in the data related to factors such as changes in the monetary policy regime since the mid-1980s and the Great Moderation that make this challenging. We therefore choose to focus on the sample starting from the first quarter of 1985 in this discussion; our results using the full sample are similar, as we report in the online appendix.

To examine how well each of the measures of aggregate output are able to forecast the CFNAI, we estimate the model using the sample observations up to the end of 2015, the period before GDP and GDI diverged. Once we determine the estimated coefficients that describe each relationship, we use those values to estimate forecasts for the period when discrepancies developed, from the first quarter of 2016 to the end of 2017. We then calculate the prediction errors, measured by the root mean-squared errors, for each measure of aggregate output. The smaller the prediction error, the better the forecasting performance.

Figure 2 displays the prediction errors from 2016 to 2017 for each of the alternative output measures—GDP, GDI, and GDPplus—estimated from our model for CFNAI and unemployment. For ease of comparison, we normalize the prediction errors from the model with GDP to one. The figure shows that the prediction errors over this period based on the GDP series are substantively lower than those based on GDI or GDPplus. This finding holds true not just for these proxies for economic activity but also for our EAI and the BL index (see the online appendix). Moreover, formal statistical tests of forecasting performance indicate that the forecasts based on GDP are significantly better than those based on GDI or GDPplus at the 95% confidence level. This result suggests that, in recent periods, GDP has been a more reliable independent indicator of economic activity than either GDI or GDPplus.

While GDP and GDI are theoretically identical measures of economic output, they can differ significantly in practice over some periods. The differences between the two series have been particularly pronounced in the past two years, when GDP growth has been consistently stronger than GDI growth. Based on this observation, some analysts have claimed that GDP might be overstating the pace of growth and that GDI, or some combination of GDP and GDI, should be used to evaluate the levels and growth rate of economic activity.

To evaluate the validity of this claim, we compared the relative performances of GDP, GDI, and a combined measure, GDPplus, for forecasting the CFNAI, which we use as a benchmark measure of economic activity over the past two years. We find that GDP consistently outperforms both GDI and combinations of the two, such as GDPplus, in forecasting aggregate economic activity during the past two years. In this sense, GDP is a more accurate predictor of aggregate economic activity than GDI over this period. Therefore, the relative weakness of GDI growth observed in recent years does not necessarily indicate weakness in overall economic growth.

Eric B. Tallman is a research associate in the Economic Research Department of the Federal Reserve Bank of San Francisco.