The Labor Force Participation Rate Trend and Its Projections

A labor force participation rate that is at or above its long-run trend is consistent with a labor market at or above full employment. In 2018, the estimated rate is at its trend of 62.8%, suggesting that the labor market is at full employment. Studying the population’s demographic makeup and labor trends for different groups sheds some light on what is driving the aggregate participation trend and implications for the future. Projections based on these trends estimate that labor participation will decline about 2.5 percentage points over the next decade.

While estimating the trend of the unemployment rate, also known as the natural rate, has a long tradition in economics, studying the trend in the labor force participation (LFP) rate is relatively new. Before 2000 labor force participation did not exhibit noticeable cyclical variations; rather it increased steadily. After 2000 the rate started to drop, and this decline accelerated with the deep recession of 2007–09. Since 2015, it has been hovering around 62.8%, its lowest level since 1978. With the unemployment rate currently at historically low levels, understanding how far the LFP rate is from its potential helps better gauge the health of the labor market.

We find that the LFP rate is at its trend of 62.8% in 2018, suggesting that the labor market is at full employment. Our estimate is roughly consistent with the Congressional Budget Office (CBO) estimates of the trend for 2018. Furthermore, we project that the trend will decline approximately 2.5 percentage points over the next decade.

Changes in the demographic composition of the population

There are substantial differences in the LFP rates of the different demographic groups. For example, people ages 25 to 54 have a higher participation rate than older or younger groups (Figure 1, panel A). Also, people with higher educational attainment participate at higher rates than those with lower education levels. 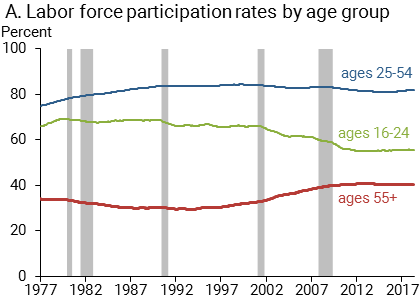 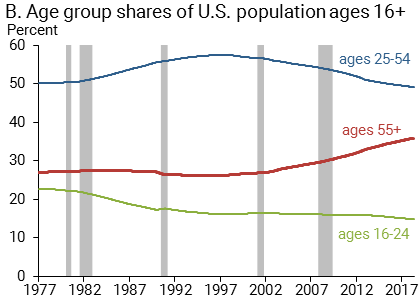 In recent decades, the demographic composition of the U.S. population has exhibited substantial changes. Most notably, the population has gotten older (Figure 1, panel B). Because the older group’s participation rate is lower, the compositional shift towards an older population would lower the aggregate LFP rate even if the rates of different groups remained unchanged. The educational attainment of the population has also increased in recent decades. In the first quarter of 2000, the share of individuals with a bachelor’s degree or higher among those ages 25 and older was 26%, while this share rose to 35% in the first quarter of 2018. The shift towards more-educated groups increases aggregate labor force participation because individuals with higher education levels have higher LFP rates.

How much do demographic changes affect the overall LFP rate trend?

To quantify how much of the decline in the aggregate LFP rate is driven by changes in the composition of the population, we construct two hypothetical aggregate LFP rate scenarios. In this approach, we use Current Population Survey (CPS) microdata from the Bureau for Labor Statistics for 1976–2018 and split the population into 56 age-gender-education groups based on seven age, two gender, and four educational categories. Figure 2 shows the actual (blue line) and our two scenarios for aggregate LFP rates.

Figure 2
LFP and two scenarios based on demographic composition 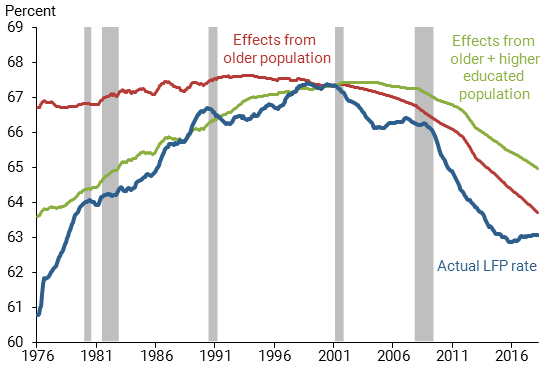 In the second hypothetical scenario, we further examine how much the increased educational attainment of the population contributed to the increase in the aggregate LFP rate. For example, Daly, Jackson, and Valletta (2007) show how shifts towards a more educated population have affected wages and unemployment. For this purpose we only fix the groups’ LFP rates at their 2000 levels, but we allow the educational distribution of each age-gender group to evolve as in the data. The green line in Figure 2 shows that this alternative scenario for the LFP rate would have declined half as much as the actual rate and less than in the first hypothetical scenario. This indicates that increased educational attainment in the U.S. population between 2000 and 2018 undid a substantial part of the decline due to the aging of the U.S. population.

These hypothetical scenarios show that between 2000 and 2018 changes in the population composition substantially lowered the aggregate participation rate and its trend. Figure 2 also shows that the actual aggregate LFP rate in 2018 is lower than our composition-driven scenarios. This means that different demographic groups’ participation rates also changed and played a role in lowering the aggregate rate. We now turn to estimating the trends in the LFP rates of different demographic groups.

Our approach for estimating trends in demographic group participation

Estimating the trends for group-specific LFP rates requires us to first disentangle changes in the group rate into the slow-moving factors that are not affected by cyclical developments in the labor market and other changes that are driven by cyclical fluctuations. The former defines the trend in the group participation rate.

Researchers have developed age-cohort models of the demographic group trends (Aaronson et al. 2006, Aaronson et al. 2014, CBO 2018, and Montes 2018). In these models, the trend for the age-specific LFP rate of a demographic group defined by gender and education is the sum of an age effect (how old you are) and a cohort effect (when you were born). Typically, the time variation of the age-specific LFP rate is attributed to cohort effects and the age effect is considered fixed, but age-specific LFP rates vary quite a bit more than can be accounted for by cohort effects. For example, older workers participate at higher rates now than they did two decades ago because they live longer and healthier lives; young workers ages 16 to 24 participate at a much lower rate than in the 1990s in part due to higher school attendance rates. Augmenting a model with structural variables such as school enrollment and social security payouts helps capture the evolving age effects. However, such an approach requires a large number of these structural variables to estimate the historical trend, as well as numerous forecasts of these variables for forecasting the trend.

The trend in the aggregate LFP rate and its projections

We construct the aggregate LFP rate trend and its projection using our estimates of the trends of different demographic groups and the actual population shares. In the estimation, we use the CBO’s projections of the age composition of the population and fix the educational composition at the latest data point. Figure 3 shows the actual LFP rate and our estimate of its trend. 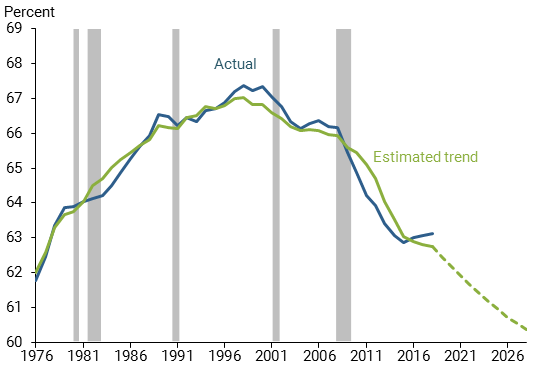 We find that the rate is at its trend of 62.8% in the first half of 2018. This is roughly consistent with the CBO’s estimate of the trend. We estimate that the aggregate trend will decline by approximately 2.5% in the next decade. Given that our method of estimating the group trends is different from the CBO’s, the close similarity of the projections of the trend for the aggregate participation rate implies that almost the entire projected future decline is driven by population aging.

In this Letter, we use a simple statistical model to construct the trend in the aggregate labor force participation rate and its projections over the next 10 years.

Our estimates indicate that the aggregate labor force participation rate is at its trend as of 2018. Combined with the low unemployment rate, this argues that the U.S. labor market is operating at or beyond its full potential. This finding is consistent with other recent work that finds that the decline in the LFP rate reflects longer-term developments (Valletta and Barlow, 2018, Daly et al. 2018).

Andreas Hornstein is a senior advisor at the Federal Reserve Bank of Richmond.

Annemarie Schweinert is a Ph.D. student in economics at the University of Wisconsin-Madison and a former research associate at the Federal Reserve Bank of San Francisco.