Labor force participation among U.S. men and women ages 25 to 54 has been declining for nearly 20 years, a stark contrast with rising participation in Canada over this period. Three-fourths of the difference between the two countries can be explained by the growing gap in labor force attachment of women. A key factor is the extensive parental leave policies in Canada. If the United States could reverse the trend in participation of prime-age women to match Canada, it would see 5 million additional prime-age workers join the labor force.

The decline in labor force participation of U.S. men and women ages 25 to 54 stands in stark contrast with other industrialized nations, where participation rates for prime-age workers have increased over time. In this Economic Letter, we show how labor force participation rates have diverged for men and women in the United States and Canada. We find that three-fourths of the difference in participation between the two countries can be explained by the growing gap in labor force attachment of women. We discuss how employment and social policies in Canada have made it easier for women to remain in the labor force while raising children. Our findings suggest that policy interventions to reduce the structural barriers that keep many women on the sidelines could bring millions of prime-age Americans into the labor force.

U.S. labor participation is falling behind

The labor force participation rate (LFP) is defined as the fraction of the working-age (16 and older) population who are working or actively looking for work. Although many things influence participation rates, one of the primary determinants is age. For example, rates are lower for younger workers, ages 16 to 24, who are finishing schooling and for older workers, 55+, who are beginning to retire. A common way to abstract from these effects is to study labor force participation for people in their prime working years, ages 25 to 54. This allows us to more directly consider the other important factors affecting labor decisions.

Figure 1 shows annual labor force participation rates for prime-age men and women in the United States and Canada from 1976 through 2017. The rates for both countries tracked closely for many years, rising steadily through 1991. This reflected the large-scale entry of prime-age women into the labor force. Growth slowed in both countries in the early 1990s, reaching nearly identical rates of 84%. 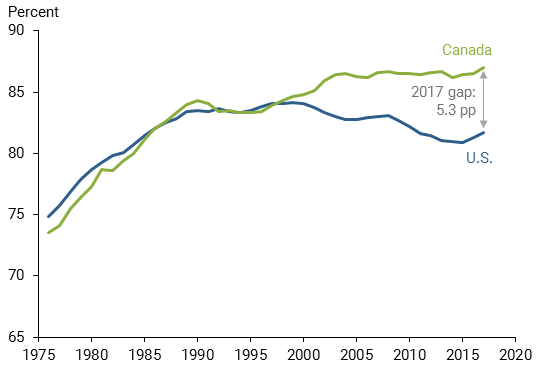 Drivers of the difference

To better understand what might be behind the divergence in Figure 1, we compared participation rates for men and women separately. Figure 2 shows U.S. and Canadian participation rates by gender from 1985 through 2017 and reveals several interesting patterns. Among men, overall participation rates remained roughly similar in both countries until the Great Recession. U.S. men show a much sharper decline following the recession, and the recovery also has been slower and less complete. The net effect is a 2.5 percentage point gap in U.S.-Canadian prime-age male labor force participation in 2017. 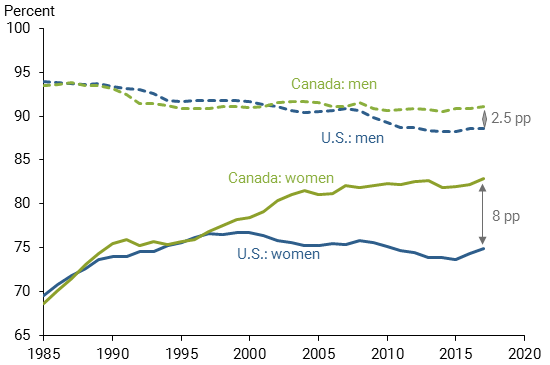 Differences in participation by education

Research on labor market outcomes has found a strong link between educational attainment and labor force participation: more-educated workers participate at higher rates than less-educated workers. The link between education and labor force attachment is immediately apparent in Figure 3, which reports participation rates among workers of three levels of educational attainment for men and women in the United States and Canada: college degree, high school diploma, and less than high school diploma. 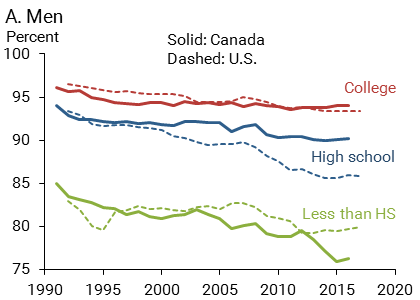 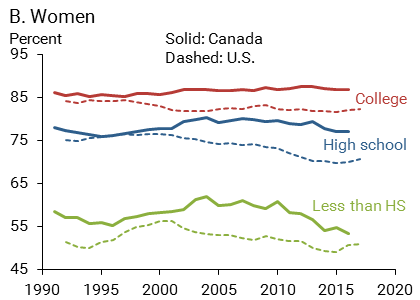 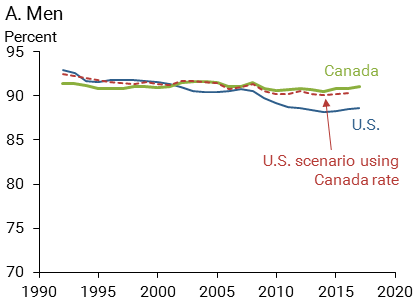 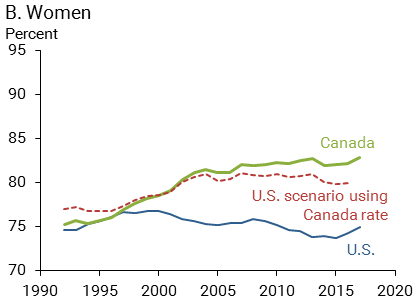 Turning to women, the differences in labor market participation for those with a high school and a college education across the two countries is striking (Figure 3, panel B). While similar in their attachment to the labor market up to the late 1990s, college-educated women in Canada continued to enter the labor force at a greater rate throughout the 2000s. In 2016, 87% of Canadian women with a college degree were in the labor market. Conversely, participation for U.S. college-educated women began to decline at the end of the 1990s and stood at 82% in 2016, 5 percentage points below college-educated Canadian women. Women with a high school education showed a similar divergence, with a 7 percentage point gap by 2016. The scenario asking what labor force participation would have been if prime-age women in the United States had the same rate of labor participation by educational attainment as Canada is very instructive. The dashed line in Figure 4, panel B reveals that most of the gap can be explained by the differences by education level. These differences at higher levels of education will be compounded in the future by the increasing gap in educational attainment between the two countries.

Over the past several decades, many industrialized countries have expanded policies to make it easier for women, particularly mothers, to stay in the labor force. A 1988 tax reform in Canada reduced the marginal tax rate of a second earner in a household. This had little effect on women’s labor supply, although part-time work by married women increased modestly for a time (Crossley and Jeon 2007). Since the mid-1990s, part-time employment for Canadian women has been on a downward trend and is currently at a level similar to their U.S. counterparts. Several other countries have promoted flexible work arrangements, which helps explain part of the gap in female participation between the United States and some industrialized countries (see Cascio et al. 2015), but not with Canada.

Two other sets of policies aimed directly at supporting parental attachment to the labor force have followed significantly different paths in the United States and Canada over this period: subsidizing childcare costs and parental leave.

The extent and availability of government subsidies for the cost of childcare varies greatly across Canadian provinces. Quebec, for instance, introduced universal childcare in the late 1990s. Typical monthly preschool fees in Montreal in 2015 were about CA$174 per month in Montreal, and CA$1,033 in Toronto (MacDonald and Klinger 2015). However, research on whether such policies have affected the labor participation decisions of mothers has found little evidence of their effectiveness. Rather, new plans simply replace existing childcare arrangements (Havnes and Mogstad 2011). Cascio and Schanzenbach (2013), for instance, found that universal preschool programs offered in Georgia and Oklahoma since the 1990s had little impact on the likelihood of mothers working.

Parental leave policies in Canada provide strong incentives to remain attached to the labor force following the arrival of a new child: a person’s job is protected with the same wages and benefits continuing to accrue during the leave, and a system of benefits funded out of employment insurance provides income replacement during the leave. Thus, a parent on leave maintains a continuous employment relationship, and this protection can last for up to 78 weeks in combination with existing maternal leave (with some variation across provinces).

Current parental leave policies in Canada arrived in several waves beginning in the late 1970s. This timing, along with variations in the timing of expansions across different provinces, has allowed research to track the positive effects of parental leave on mothers’ labor force participation rates (Baker et al. 2008). This is consistent with evidence on the effect from other countries’ leave programs compared with the limited policies available in the United States (Blau and Kahn 2013).

The contrast between the incentives Canada and the United States offer prime-age workers to remain attached to the labor force is clear. A large pool of skilled potential workers could be encouraged to join the labor market with the right set of policies. By reversing the trend in participation of prime-age women to catch up with Canada’s labor market participation rate, the United States could add as many as 5 million prime-age workers to its labor force.

Joseph H. Pedtke is a PhD student in economics at the University of Minnesota and a former research associate at the Federal Reserve Bank of San Francisco.

Nicolas Petrosky-Nadeau is a senior research advisor in the Economic Research Department of the Federal Reserve Bank of San Francisco.

Annemarie Schweinert is a PhD student in economics at the University of Wisconsin-Madison and a former research associate at the Federal Reserve Bank of San Francisco.