How Persistent Are the Effects of Sentiment Shocks?

People’s feelings about the economy have been shown to be strongly connected to a state’s current economic health over short horizons. So, how well do such consumer sentiment measures coincide with economic growth over a longer period? Sentiment shocks are associated with large and statistically significant changes in state economic output over as long as a three-year horizon. While the sentiment shocks initially affect state consumption expenditures to a smaller degree, the impact tends to be more persistent, continuing as long as five years after the initial shock.

In a recent paper, Benhabib and Spiegel (2018) examined whether consumer sentiment directly influences output levels. They studied sentiment shocks—changes to consumer sentiment that are not related to economic fundamentals—at the U.S. state level, on the notion that, if changes in local sentiment about national economic prospects have real effects, they will induce local changes in consumption and investment expenditures. Their analysis demonstrated that consumer sentiment is positively and statistically significantly associated with state output growth over the following year.

In this Economic Letter, we extend the analysis of Benhabib and Spiegel (2018) to examine the effects of sentiment shocks over longer periods. We find that these effects persist beyond the one-year period studied in that paper and appear to last for about three years. We also find that the estimated impact on state consumption is smaller initially but appears even more sustained, persisting for five years after the initial sentiment shock. Our extended results therefore indicate that consumer sentiments unrelated to existing economic fundamentals can have a longer-term economic impact.

The relationship between sentiment and the economy

Numerous studies have identified a strong connection between measures of consumer sentiment and current local economic conditions. However, the implications for this relationship could differ depending on how people form their attitudes about how well they’re doing. On the one hand, sentiment may reflect knowledge about current or future economic fundamentals. In this case, a change in sentiment may accompany a similar change in economic activity because the sentiment change represents news about future changes in fundamentals. For example, people’s expectations about the prospects for economic activity in a certain area may improve in the wake of an announcement of major infrastructure improvements. In this case, while sentiment and economic activity move together, one need not cause the other.

On the other hand, autonomous changes in sentiment itself that are unrelated to economic fundamentals may affect economic activity. This notion is commonly referred to as “animal spirits.” These autonomous changes in sentiment, or “sentiment shocks,” can prove to be self-fulfilling in various theoretical models such as Benhabib et al. (2015). For example, feeling better about economic conditions may make consumers and investors comfortable to spend or invest more, which may raise the returns on other investments in environments where scale economies exist. Alternatively, positive sentiment shocks may lower the expected probability of default on a loan, making creditors more willing to approve that loan. In turn, this increases the borrower’s ability to borrow to finance additional investment or consumption.

However, identifying autonomous sentiment shocks in the data is challenging. As a result, it has been difficult to empirically validate the theoretical models that predict persistent or permanent effects of sentiment shocks. Indeed, some papers (for example, Barsky and Sims 2012) explicitly identify sentiment shocks as those that only have a transitory impact on economic activity.

The politics of sentiment

Benhabib and Spiegel (2018) examine quarterly sentiment data from 2005 through 2016. They base their measure of sentiment on answers to a question from the University of Michigan Surveys of Consumers concerning national economic conditions over the next five years. The responses do not appear to have cross-sectional patterns, either by income, education, geography, or political partisanship, and the answers track national data closely on average.

One potential challenge in identifying a causal relationship between sentiment and activity is that survey responses about future economic conditions may be tied to the current fundamentals of the local economy, as opposed to being truly autonomous. They address this potential identification problem by focusing on political differences in sentiment levels by state. This type of identification has been used in other studies; for example, Gillitzer and Prasad (2016) show through Australian survey data that higher sentiment is associated with having a member of your political party in office at the federal level. Similarly, Mian, Sufi, and Khoshkhou (2017) use presidential elections to estimate changes in sentiment about the effectiveness of government policy.

The assumption underlying this methodology is that changes in federal political fortunes are independent of economic conditions in individual localities. By extracting variation in sentiment that is attributable solely to political differences, Benhabib and Spiegel (2018) are able to purge any relationship between survey responses and local economic conditions. This allows them to better identify the relationship between sentiment shocks and future economic activity.

Results for the one-year outlook

Benhabib and Spiegel (2018) estimate that the impact of sentiment on state output is positive and rather large. The data therefore support this as a significant sentiment channel for differences in economic growth across U.S. states. A one-standard-deviation increase in sentiment under this specification would be associated with a 2.5% increase in predicted growth at the state level. This is a little smaller than the average standard errors for state growth rates in our sample, 3.0%. Our results are robust to a wide variety of sensitivity tests.

Their results indicate state consumption has a statistically significant and positive response to sentiment differences as well. Moreover, the estimates appear to indicate an economically significant response, predicting that a one-standard-deviation increase in sentiment results in a 1.3% increase in personal consumption expenditures. Such a movement is about half the average standard deviation in state PCE in our sample of 2.3%.

We extend the analysis to investigate whether sentiment shocks can affect state activity over even longer periods. The same specification is available in an appendix for Benhabib and Spiegel (2018), examining the impact at two- through five-year horizons. Details of our specification and regression analysis can be found in an online appendix (pdf, 53 kb).

Figure 1 summarizes our results, showing the impact of a one-standard-deviation increase in sentiment, equal in our sample to 0.2, on average annual growth in output and PCE consumption over one- to five-year horizons. Our estimates indicate that sentiment shocks have a diminishing but persistent effect on both state output and consumption. These estimates indicate that sentiment shocks can have economically powerful effects, such that a one-standard-deviation increase in sentiment at the state level is associated with a 2.5 percentage point boost in annual state output growth (blue bars) in the first year and a 1.0 percentage point increase in average annual growth over three years. 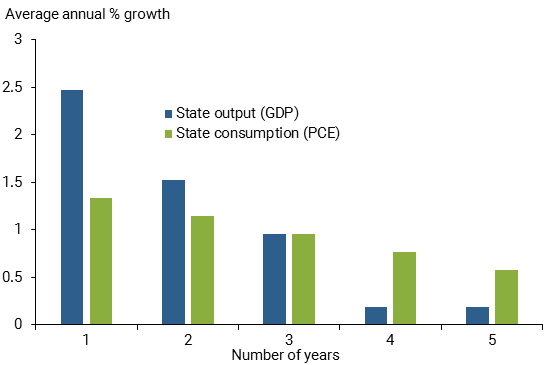 Source: Haver, University of Michigan Surveys, and Stewart and Woon (2018).

Our finding that the effects on consumption are more persistent than those for output in general are consistent with a pattern where individuals or households react to sentiment shocks immediately in terms of their investment decisions but then spread consumption of their expected increases in lifetime wealth over time. Because output is a combination of investment and consumption, as well as other components, its persistence would reflect a mixture of the persistence of investment and consumption. However, we caution that the estimated differences in output and consumption responses at longer horizons, five years for example, are too imprecisely estimated to conclude that they were significantly different at standard confidence levels.

We should also note that our finding that the impact of the sentiment shocks diminishes over time is not necessarily surprising. Even with highly persistent effects, new sentiment shocks could occur later, particularly under the longer horizons, which would add noise to the sample and reduce the inferred effect.

Our results confirm that the statistically significant relationship between state sentiment about national economic prospects and state economic activity identified by Benhabib and Spiegel (2018) for one-year horizons also holds over longer periods. We find a positive relationship between sentiment about national economic prospects at the state level and average annual economic growth by state for as long as three years. We find smaller initial impacts on state consumption, but those impacts are particularly persistent, remaining positive and significant over our longest estimated five-year interval.

Our overall results therefore support the notion that there is not only a positive initial empirical relationship between sentiments and future economic activity and consumption expenditures over modest horizons, but that this relationship appears to be quite persistent, particularly for consumption expenditures by state. As such, our results suggest that autonomous changes in economic sentiment, or “sentiment shocks” unrelated to existing fundamentals, can indeed have longer-term economic impacts.

Jess Benhabib is a professor of economics at New York University.

Ben Shapiro is a research associate in the Economic Research Department of the Federal Reserve Bank of San Francisco.

Mark M. Spiegel is a vice president in the Economic Research Department of the Federal Reserve Bank of San Franciso.