U.S. labor force participation by people in their prime working years fell substantially during the Great Recession, and it remains depressed despite some recovery since 2015. This appears to reflect longer-term developments, rather than lingering effects from the recession. One key factor is labor market polarization—manifested in the gradual disappearance of manual jobs—which helps predict declining worker attachment across states. This has been reinforced by other long-term economic and social trends, such as health considerations, that also have eroded prime-age labor force attachment.

As the economic expansion continues, the U.S. unemployment rate is heading toward historical lows, suggesting a very healthy labor market. A variety of other labor market indicators tell a similar story. One indicator that may be sending a different signal is the labor force participation rate, which is the fraction of adults age 16 and older who are working or actively looking for a job. Thus far in 2018, it has remained about 3 percentage points below its level from just before the Great Recession.

Some observers have suggested that the weak labor force attachment reflected in the low participation rate indicates that the labor market has not yet recovered from the recession—that there is still an untapped, excess reserve of potential workers who will reenter the market as conditions improve further. They point in particular to the lower participation rate of “prime-age” individuals—those ages 25–54 who for the most part have finished their formal schooling and are not on the verge of retirement. This group tends to have high labor force attachment and participation rates in general, hence the decline suggests that some unusual economic factors are at play.

As we discuss in this Economic Letter, unusual factors are at play in keeping labor force participation low, but they appear to reflect long-term changes in labor market conditions rather than shorter-term cyclical weakness. One key factor is labor market “polarization,” or the slow disappearance of jobs that traditionally have been in the middle of the wage and skill distribution. This has been a sustained trend over the past few decades that extends beyond the ups and downs of the business cycle. Our analysis of state-level data suggests that about half or more of the decline in prime-age participation since the year 2000 is attributable to the disappearance of manual labor positions in manufacturing and other industries—a key feature of labor market polarization.

The U.S. overall and prime-age labor force participation rates have fallen significantly over the past two decades (Figure 1). Much of the decline in the overall rate since the Great Recession has been due to the passage of the large baby-boom generation into traditional retirement age ranges (Aaronson et al. 2014). The timing of this powerful demographic factor was closely aligned with the recession, making it hard to identify their separate effects: The front end of the baby-boom generation turned 65 in 2011, initiating a retirement wave when the labor market was still struggling to recover from the recession. 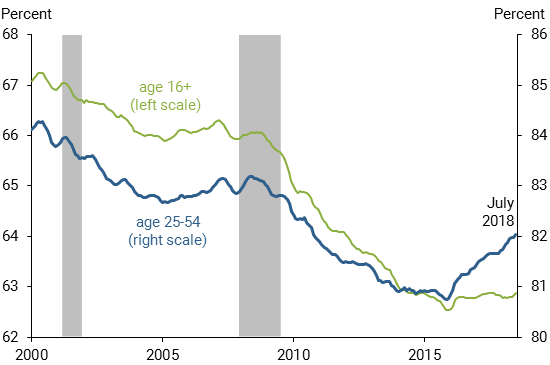 Compared with the overall participation rate, the prime-age rate is much less affected by demographic trends such as retirement behavior and schooling decisions by younger individuals. As such, it provides a clearer read on the influence of other fundamental economic forces on labor force attachment. Figure 1 shows that the prime-age participation rate also declined significantly during the recession. However, it has recovered somewhat since reaching a low in 2015, offsetting the effect of aging and keeping the overall rate largely constant.

A key question is whether additional gains in the prime-age rate are likely and can be sustained. Recent broad assessments suggest that the answer is no. For example, the Congressional Budget Office (CBO 2018) reported that, with the gains since 2015, the prime-age rate is back close to trend but is expected to fall further in the future. This view is loosely supported by the pattern in Figure 1: The net decline in the prime-age rate was roughly 1 percentage point during the first and second halves of the period shown. What factors might explain this downward trend in the prime-age participation rate? In their recent comprehensive overview of relevant research, Abraham and Kearney (2018) concluded that “labor demand factors, in particular trade and the penetration of robots into the labor market, are the most important drivers.” To help flesh this story out, we focus in particular on the declining demand for “routine” manual labor.

The decline of routine manual labor in the United States

As defined by David Autor (2015) and other researchers, labor market polarization refers to the gradual elimination of routine jobs, which involve repetitive tasks and hence are readily replaced by automation and other new production technologies. Polarization affects selected white-collar jobs, but its impact on routine manual employment is especially noteworthy. This category consists broadly of traditional skilled and semi-skilled blue-collar jobs, which are within such manual occupation categories as production, maintenance, and material moving. These jobs tend to be concentrated in the manufacturing industry, but they also are common in a number of other industries, such as transportation and construction. The status and extent of these jobs in the United States has declined as production technologies have evolved to replace them and as the use of these technologies has spread to developing countries with a ready supply of low-cost labor.

Figure 2 depicts the decline of routine manual and manufacturing jobs in the United States since the year 2000. While the former accounts for about twice as many jobs, the share of total jobs in each category fell by about 4½ percentage points. 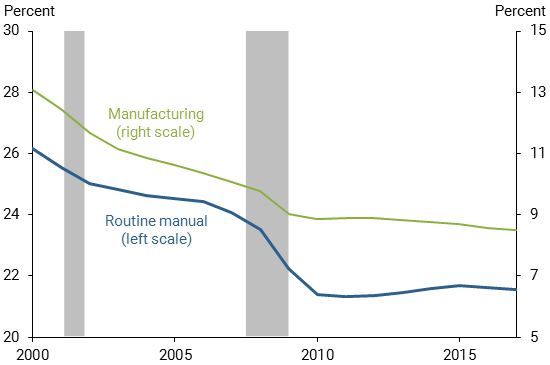 The disappearance of such jobs creates unique challenges. During much of the postwar period, they formed the backbone of many local economies, providing stable, well-paid employment for several generations of workers. Their disappearance was not necessarily met by the emergence of new jobs requiring similar skills in the same geographic area. The struggles of communities in the deindustrialized Rust Belt are a conspicuous example of this process. If the opportunity for stable blue-collar employment dries up in hard-hit communities, the resulting discouragement may fray the labor force attachment of groups that held such jobs in the past, causing participation rates to decline. Recent research has found that the disappearance of manufacturing jobs relates closely to the drop in prime-age labor force participation rates, based on analysis of narrowly defined local areas (Charles, Hurst, and Schwartz 2018).

While narrow geographic areas are especially useful for assessing such trends, the relevant relationships are evident in data at the state level as well. Declines in labor force participation and the prevalence of routine manual and manufacturing jobs have varied substantially across states since the year 2000. Figure 3 shows a systematic relationship between changes in the prime-age labor force participation rate and the routine manual employment share across states, with changes measured between 2000 and 2017. Each of the 51 circles represents a state including the District of Columbia, with the circle size proportional to the state’s share of the national working-age population in 2017. The fitted line depicts the positive correlation between the routine manual share and participation rates: States that experienced larger drops in the routine manual share also tended to see larger declines in prime-age participation. 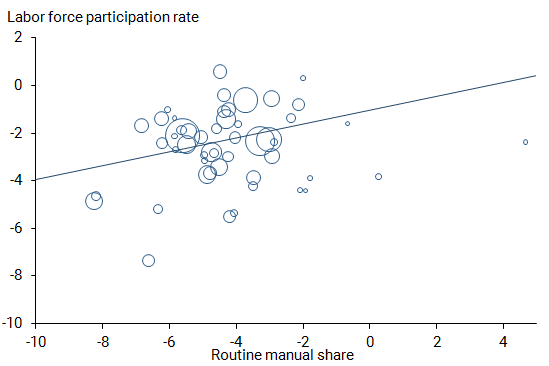 The fitted relationship is quite imprecise, indicating that other systematic or random factors matter much more than the routine manual share. However, the relationship is reliable based on conventional statistical criteria (5% significance). Moreover, incorporating broader measures of changes in state labor market and economic conditions, including the unemployment rate, overall employment, and GDP, does not alter the estimated contribution of the routine manual share. This helps reduce the concern that declining routine manual employment could simply be a stand-in for other, broader economic changes. The results are very similar when the manufacturing share is used instead. Moreover, the estimated relationship is somewhat stronger for men than for women, consistent with the greater tendency for men to be employed in manual jobs.

One caveat to these findings is that the estimated relationship is much stronger in the earlier part of the period we examine, consistent with relatively little change in the routine manual and manufacturing shares since the recession ended (Figure 2). This pattern may have contributed to the bounceback in prime-age participation since 2015, as strong cyclical conditions were not offset by substantial polarization effects during the recovery.

To summarize, our results suggest that a significant portion of the decline in prime-age labor force participation since 2000 is attributable to the disappearance of traditional blue-collar jobs. Given the fundamental contribution of changing technology to this process, it is unlikely to reverse, suggesting that it will continue to hold down prime-age participation in the foreseeable future.

Moreover, as the job market has evolved and some labor force participants have dropped out, other long-term economic and social trends have reinforced low participation rates among prime-age individuals. As discussed in Abraham and Kearney (2018), these factors include the rise in disability claims and other indicators of poor health (such as opioid abuse), an increasing fraction of individuals (primarily men) with prison records, and improvements in the availability and quality of leisure pursuits, such as online gaming; these factors are also discussed in Board of Governors (2018) and CBO (2018).

It is unlikely that the contributions of these factors to low prime-age participation rates can be offset on a sustained basis by monetary and fiscal stimulus aimed at fostering a hot labor market. On the other hand, if encouraging labor force participation is deemed to be an important economic and social goal, other well-designed policies may be successful. These could include policies aimed at enhancing skill acquisition and retraining, increasing worker mobility, improving workforce health, and easing childcare constraints, along with other broad social policies to encourage and support work among prime-age adults.

Nathaniel Barlow is a research associate in the Economic Research Department of the Federal Reserve Bank of San Francisco.

Board of Governors of the Federal Reserve System. 2018. “Monetary Policy Report, July 2018.”