Real estate has hit record high prices and elevated valuations in some markets. Do bank lenders have sufficient capital to withstand a large price drop? While their portfolios have a similar concentration in real estate as they did before the global financial crisis, both underwriting standards and capitalization have improved significantly since then. Estimates using the Federal Reserve’s stress test scenarios suggest that, although a few small banks would be undercapitalized, the banking sector overall appears resilient enough to weather a steep decline in real estate prices.

This Economic Letter examines the capital adequacy of banks to weather a large decline in real estate prices. Since the Federal Reserve evaluates this risk for the largest banking institutions, I use a loss rate similar to that used in the Fed’s stress tests to evaluate smaller bank real estate portfolios. My estimates suggest that only a small fraction of banks would be undercapitalized as a result of the hypothetical real estate loan losses in their loan portfolios.

With the current high prices, a number of real estate valuation indicators have signaled growing risk or “frothiness” in certain market segments. For example, the capitalization rates—the ratios of operating income relative to the sale price of commercial properties—have reached historical lows for multifamily residential and industrial commercial real estate. In the residential real estate market, the price-to-rent ratios in Los Angeles, Miami, and Denver are 10 to 20% above their long-run trends, compared with 4% at the national level (Brainard 2018). Regardless of potential real estate risk, the most recent bank supervisory stress tests found that the 35 largest banking organizations—representing about 80% of the banking industry—are strongly capitalized and would be able to lend to households and businesses under the most severe hypothetical scenario (Federal Reserve Board 2018a).

The thousands of smaller banks not included in the supervisory stress tests are mostly community banks that serve businesses and residents in local banking markets. They tend to have a higher portfolio concentration in real estate lending, and their loan portfolios are also less geographically diversified (FDIC 2012). Since these banks are more likely to serve local borrowers who have limited alternative financing options, the banks’ own vulnerability could create a negative feedback loop that substantially tightens credit availability in some communities (Berger and Udell 2002).

History shows that the failure of a large number of smaller depository institutions over a short period of time, like the Savings and Loan crisis in the 1980s, can be disruptive to the overall financial sector and economy. Furthermore, the large number of bank failures in the late 1980s and early 1990s was in part triggered by the collapse in commercial real estate prices (Wheelock 2007), and the 2008-09 global financial crisis followed the bursting of the housing bubble. 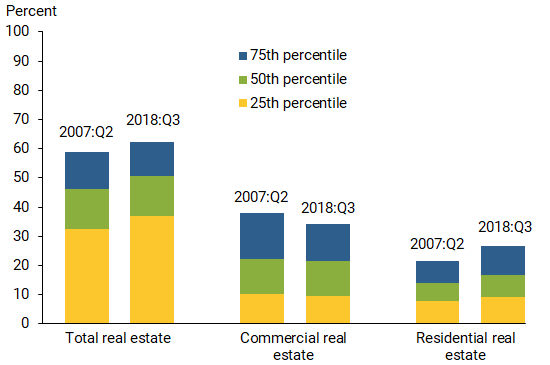 While real estate loan concentration today looks similar to its status at the onset of the global financial crisis, banks have tightened their loan underwriting standards a great deal since then, as shown by the Federal Reserve Senior Loan Officers Opinion Surveys conducted after the crisis (Federal Reserve Board 2018b). Nevertheless, if real estate prices drop abruptly, do banks have sufficient capital to withstand it?

The banking industry is much better capitalized today than in 2007. The biggest improvement in capitalization is among the largest banks, whose capital has more than doubled over the past 10 years. While the buildup of bank capital since the financial crisis is most evident among large banking organizations, all banking organizations are subject to new and improved capital standards that emphasize not only the quantity but also the quality of bank capital. This improvement followed the enactment of the Dodd-Frank Wall Street Reform and Consumer Protection Act in 2010 and U.S. banking regulators’ adoption of the Basel Committee on Banking Supervision’s new capital standards (Basel III).

Regarding quantity, the new capital standard increased the level of capital requirements to ensure that banks are sufficiently resilient to withstand losses in times of stress. It raised the minimum common equity from 2% to 4.5% of risk-weighted assets. In addition, banks are required to hold a capital conservation buffer comprising common equity of 2.5% of risk-weighted assets. If a bank’s common equity falls into the buffer range, its discretionary capital distributions will be constrained to preserve capital.

Regarding quality, the new capital standard places a greater focus on going-concern, loss-absorbing capital in the form of Common Equity Tier 1 (CET1) capital. It raised the composition of high quality CET1 capital in meeting the total capital requirements under the new standard.

In general, a decline in real estate prices raises real estate loan delinquency, which is eventually written down as loan losses. Despite that typical transmission mechanism, different banks are exposed to different types of real estate lending in different parts of the country. A borrower’s decision to default depends not only on the value of the underlying collateral but also other factors including cash flow, option values, and stigma.

Since the terms of bank lending and the specifics of loan workouts generally are not provided in publicly available banking data, estimating the effects of falling real estate prices on individual bank performance is quite challenging. As an alternative, I examine banks’ loss absorbing capacity, that is, CET1 plus Allowance for Loan and Lease Losses to withstand real estate credit losses. Specifically, I address the question, will hypothetical stress-induced losses in a bank’s real estate portfolio make the bank undercapitalized?

For this exercise, I collected bank-level financial statement data from the Reports of Condition and Income (Call Reports) gathered by the Federal Financial Institutions Examination Council for those banks that were not covered by the Federal Reserve stress tests. I use the real estate portfolio loss rates under the severely adverse scenario in the 2018 Federal Reserve Dodd-Frank Act Stress Test, which assumed house prices fall 30%, and commercial real estate prices fall 40% by the third quarter of 2019. Under this scenario, the supervisory estimates projected loss rates for first-lien mortgages was 2.7%, junior liens and home equity lines of credit 4.9%, and commercial real estate loans 8.3% (Federal Reserve Board 2018a).

A few caveats are in order. I do not intend this exercise to be comparable to a comprehensive stress test where the entire bank balance sheet is stressed under a broad severe economic scenario. Rather, it is a narrowly targeted exercise about the effects of a hypothetical real estate price decline on bank capital. Hence, unlike the Fed’s stress test where the decline in real estate prices and a severe recession are assumed to take place concurrently, this exercise is solely about a real estate price decline without a severe recession. Thus, using the real estate scenario in the Fed’s stress test may exaggerate the real estate portfolio losses. By applying the aggregate loss rates to all banks immediately, this exercise does not take into consideration idiosyncratic differences in each bank’s underwriting standards, of which data is limited; assuming an immediate hit to bank capital instead of spreading the losses over two years also denies banks the possibility of making up some of the losses through earnings. 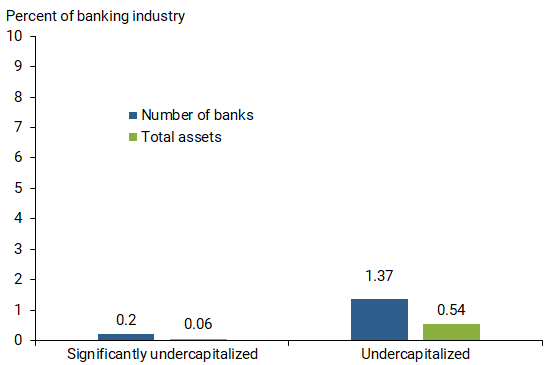 For robustness, I also stress each bank’s entire loan portfolio using the aggregate supervisory estimate of portfolio loss rates in the 2018 stress test: 8.3% for commercial real estate loans, 2.7% for first-lien mortgages, 4.9% for junior-lien mortgages, 7.3% for commercial and industrial loans, and 14.4% for credit card loans. Assuming an immediate hit to bank capital with the hypothetical stress losses to the entire portfolio, 193 banks would be undercapitalized and 21 banks significantly undercapitalized. Total assets of these 214 banks account for about 5% of the entire banking industry. To put these results into perspective, between 1988 and 1991, a total of 1,656 FDIC-insured depository institutions either failed or received assistance; together their total assets accounted for about 20% of the banking industry at that time.

Bank real estate loan concentration today looks broadly similar to that at the onset of the global financial crisis. However, the banking system today should be more resilient due to the notable increase in both the quantity and the quality of bank capital, especially among the largest banking organizations. Moreover, loan underwriting standards have improved since the financial crisis. Assuming an immediate real estate portfolio loss similar to the severity in the Fed’s stress tests of large banks, the simulation described in this Letter shows that only a handful of small banks representing a small fraction of the industry would be significantly undercapitalized.