Does the Fed Know More about the Economy?

In assessing the current or near-term state of the economy, forecasts from Federal Reserve staff seem to provide little additional information to improve commercial forecasts. However, Fed forecasts for economic growth a year or more in the future substantially enhance the accuracy of private-sector forecasts. The Fed’s policy announcements often reveal some of this forecast information. Accordingly, when the Fed surprises financial markets with indications of higher future interest rates, private forecasters tend to revise up their projections of future output growth.

Financial markets and businesses constantly seek to understand where the economy is headed to help shape investment decisions. Professional forecasters absorb various pieces of information and invest a lot of resources to form consistent projections. Similarly, the Federal Reserve employs a small army of economists who are working hard to understand the economy. So, does the Fed actually know more about the economy? That is, do Fed forecasts contain information that is not already embedded in other forecasts? And if so, does the public try to infer what the Fed thinks about the economy from its policy announcements, since these Fed forecasts are not immediately accessible?

The answers to these questions are not only interesting from a forecasting perspective, they are also important in understanding how monetary policy actually works. If people change their views based on a belief that the Fed’s announcements contain inside information, then this is another way monetary policy can influence the economy. For example, an interest rate increase that surprises financial markets can indicate that the Fed has a more optimistic view about the economic outlook. In this sense, tighter monetary policy can actually be positive news for the economy, the opposite of the typical effect of raising interest rates.

In this Economic Letter, I summarize my findings in Paul (2019) that address the above questions. First, I examine Fed and private-sector forecasts, following the empirical strategy by Romer and Romer (2000) using data from 1980 through 2013, the latest publicly available forecast by the Fed. I show that, while private-sector forecasts are close to Fed forecasts for GDP in the near term, the Fed’s longer-term forecasts tend to be more accurate.

Moreover, I find evidence that forecasters try to learn more about the Fed’s views from its policy announcements. Financial markets often revise their expectations about the path of interest rates after Fed announcements. Expanding on work by Nakamura and Steinsson (2018), I analyze whether surprise changes in short-term interest rates at various horizons are followed by systematic revisions in private-sector forecasts. I find that private-sector forecasts for GDP increase after an upward change in expected future short-term interest rates. That is, by tightening the policy rate relative to financial market expectations, the Fed may implicitly signal that it has a more optimistic view about where the economy is headed—leading to more positive commercial forecasts of GDP. These results are consistent with the view that the Fed possesses additional insights into the future path of GDP, as opposed to the current state of the economy, and I discuss the potential implications for monetary policy from these results.

Comparing forecasts from the Fed and the private sector

Before every meeting of the Federal Open Market Committee (FOMC), the staff of the Federal Reserve Board of Governors computes forecasts for the U.S. economy. These forecasts are collected in the so-called Tealbook and formerly in its predecessor, the Greenbook. Tealbook forecasts form the basis of the discussions about interest rates at FOMC meetings. However, these forecasts are not known to the public until they are released five years after the meetings they were prepared for.

Besides the Fed’s forecasts, many different private-sector forecasts also exist. My study focuses on the Blue Chip Economic Indicators, a monthly survey of professional forecasters from various institutions, including several participants in financial markets. In particular, I analyze the Blue Chip survey’s average GDP growth forecasts for the current quarter, known as nowcasts, and other forecasts up to seven quarters in the future.

I conduct a type of horse race between these two forecasts. Since they are generally prepared at different times, I choose to compare the Tealbook forecast to the Blue Chip forecast that was submitted in the month after the Tealbook forecast was prepared. This gives the private sector a small timing advantage in this study.

Following the empirical strategy in Romer and Romer (2000), I assess the statistical relationship between future quarterly real GDP growth and their forecasts in the Tealbook and the Blue Chip for forecast lengths, or horizons, ranging from current conditions to seven quarters in the future. I use a conventional linear regression to analyze their joint relationship to the actual growth data. The results from this exercise describe the accuracy for each of the two forecasts as weights. A weight of one indicates that a person can fully trust a specific forecast. A weight of zero means that the forecast should be disregarded. A negative weight signals that a person should actually take the opposite view of a forecast, conditional on knowing the other forecast.

Figure 1 illustrates the findings from this exercise for various forecast horizons. For horizons between the current quarter and up to two quarters ahead, the Blue Chip forecasts receive a positive weight. However, further in the future, the weight on the private-sector forecasts turns negative. In contrast, the Fed forecasts receive a positive weight up to 0.85 at a horizon of four to five quarters ahead, despite the Fed’s timing disadvantage. Thus, the Fed’s GDP forecasts provide valuable information over the private-sector forecasts several quarters in the future. In Paul (2019), I show similar results for forecasts of the unemployment rate and medium-term forecasts for inflation. 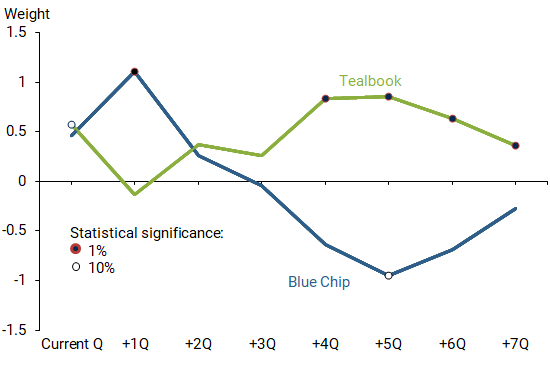 Note: Weights on forecasts for the current and subsequent quarters. Sample: February 1980 through December 2013. See Paul 2019, Table 12, for details.

However, the Fed’s Tealbook forecasts are not immediately known to the public. Because of this, commercial forecasters cannot simply incorporate the Fed’s views into their own forecasts. As a next step, I test whether private-sector forecasters instead try to infer the Fed’s views from its policy announcements.

To test whether the private sector incorporates insights from the Fed’s forecasts, I turn to measures of monetary policy surprises. These are given by price changes in future contracts for short-term interest rates measured in a tight window around announcements from the Federal Open Market Committee (FOMC). They therefore reflect unanticipated movements in expected short-term interest rates in response to the news released in the FOMC announcements.

I use monetary policy surprises for various horizons of short-term interest rates—from the current month up to six months ahead. I measure how private-sector forecasts for GDP over the following year move in relation to each of the surprises. Figure 2 summarizes the estimation results. I consider two samples from different time spans to check the strength of the results. 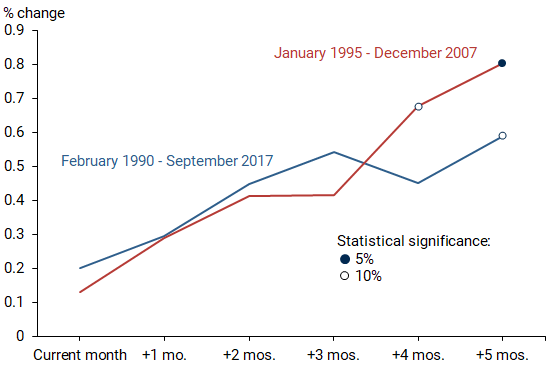 Note: Estimated percentage point change in Blue Chip forecast for GDP growth over the next year to a 1 percentage point surprise change in short-term interest rates for the current and subsequent months with respect to the policy announcement. See Paul 2019, Table 2, for details.

These results seem contradictory to the standard theory on the effects of monetary policy, which suggests that a tightening of future monetary policy is associated with lower GDP growth forecasts. Instead, the findings are consistent with the view that FOMC announcements release information about the Fed’s view, and private forecasters change their expectations about economic activity accordingly. In Paul (2019), I show similar results for forecasts of inflation and unemployment, but they are statistically not as strong as the ones for GDP.

These results have important implications for the effects of monetary policy and how it is communicated to the public. First, the impact of interest rate policy depends on whether the Fed releases information about its policy at the same time as information about the state of the economy. The findings show that this is particularly the case for forward guidance from the Fed that changes market expectations about future interest rates. If an interest rate increase goes hand in hand with a positive outlook of the economy, the public may react to both the tighter policy and the new information. Disentangling these channels is challenging when studying their quantitative effects.

Second, when the Fed’s views diverge strongly from the public’s views, a potential tradeoff between policy action and information release could arise, which may change the optimal timing of interest rate decisions. For example, if the Fed has a particularly negative outlook and lowers rates to provide some economic stimulus, the public might infer the intent behind the move and react to that interpretation rather than to the rates themselves; this could result in an unintended consequence of slowing down the economy. Third, on a more general note, any information released by the Fed about the future state of the economy—for example, long-run views released through its quarterly Summary of Economic Projections—may influence the public’s views. Such releases can therefore be seen as a tool to influence expectations and the path of the economy.

The findings in this Economic Letter suggest that Federal Reserve forecasts about the future path of GDP can be more accurate than private-sector forecasts. However, because these Fed forecasts are not known to the public, people instead try to learn about the Fed’s views from its policy announcements. When the Fed surprises the market with an expectation that interest rates will rise in the future, the Fed signals that it expects the economy to grow stronger. From this news, forecasters revise their expectations of the future path of GDP upwards. Such forecast revisions influence the effectiveness of monetary policy and provide a challenge to studying the effects of monetary policy empirically.