The Evolution of the FOMC’s Explicit Inflation Target

Analyzing the narrative of historical Federal Open Market Committee meeting transcripts provides insights about how inflation target preferences of participants have evolved over time. From around 2000 until the Great Recession, there was general consensus among participants that their inflation target should be about 1½%, significantly below both average inflation over the period and survey measures of longer-run inflation expectations. By the end of the recession in 2009, however, the consensus had shifted up to 2%, which became the official target announced to the public in January 2012.

In January 2012, the Federal Open Market Committee (FOMC) announced an explicit inflation target to the public for the first time in its history, stating, “the Committee judges that inflation at the rate of 2%, as measured by the annual change in the price index for personal consumption expenditures, is most consistent over the longer run with the Federal Reserve’s statutory mandate” (Board of Governors 2012). This announcement was the culmination of many years of internal discussion and debate by FOMC participants about whether they should have a target at all and, if so, what that target should be.

In this Economic Letter, we summarize FOMC meeting deliberations leading up to the 2012 explicit target announcement, as examined in our recent study, Shapiro and Wilson (2019). In numerous instances during deliberations, FOMC participants made explicit statements regarding their preferred inflation target. For example, in the March 21, 2007, meeting, then-President of the San Francisco Fed Janet Yellen stated, “I remain comfortable with the goal that I enunciated some time ago—a long-run inflation objective of 1½% for the core PCE inflation rate.” Searching over the entire archive of publicly available historical transcripts of FOMC meetings, we track the explicit statements made by participants about their preferred inflation target.

The analysis shows that participants generally expressed a preference for an inflation target around 1½% from 2000 to at least 2007. This is below both average personal consumption expenditures (PCE) inflation over the period, which was around 1.8%, and survey measures of longer-run PCE inflation expectations, which were over 2%. However, preferences appeared to shift sharply by the end of the Great Recession, with the consensus moving up to 2%. This shift may well have been a reaction to the abrupt decline in inflation during the Great Recession and the federal funds rate hitting its effective lower bound, though we cannot rule out that changes in the composition of the FOMC also played a role.

We performed an automated regular-expression search over all FOMC meeting transcripts including conference calls from 1986 through 2013, the latest available, for terms or phrases related to inflation objectives. The search algorithm essentially looked for sentences containing terms like “target,” “long-run,” or “goal,” combined with terms like “inflation” or “core PCE.” This search yielded several hundred matches. We then reviewed and analyzed the sections of text including and surrounding the matched sentences to understand their context.

Discussions of explicit inflation targeting did not begin to appear in the FOMC meetings until around 1994. Before then, FOMC participants occasionally mentioned an objective of “price stability” without relating that to an explicit inflation target. One illuminating exception was a statement by Federal Reserve Board Governor David Mullins in the November 1993 meeting that suggested an implicit target moving below 3% by that time: “I think there’s a real payoff not just from stabilizing inflation in the 3–4% range but in moving lower.”

The first serious consideration of an explicit inflation target we could find comes from St. Louis Fed President Thomas Meltzer in 1994. At the July meeting that year, he said, “If we don’t make an explicit statement in this FOMC testimony with respect to our long-run expectations on inflation that goes beyond ‘we think price stability is good,’ and get more specific in terms of a target range, then at the very least I think we have to make it clear that we consider 3% inflation to be unacceptable.” A few meetings later, in November 1994, he stated: “I feel that it may be time for us to consider setting a specific inflation target that looks out into the future. I think, and this point was made as well, that it could make our job considerably easier in circumstances like the present—with upward cyclical inflationary pressures—if people were willing to look out to a longer-range target and that added to credibility.”

There was much debate over the following couple of years about whether the FOMC should have an inflation target, even internally. For instance, Atlanta Fed President Robert Forrestal, during the first meeting of 1995 said, “I would be against an inflation target and I would associate myself entirely with the views of Governor [Janet] Yellen,” who had noted potential risks while others expressed favoring a target. The question remained unsettled into the late 1990s, as exemplified by President Melzer’s statement at the November 1997 meeting: “What are the FOMC’s intentions? Do we like seeing inflation below 2%? Does the public know it? I think, as I have said before, that we ought to be more explicit about our longer-term objective. In that event, it would be much less likely that our actions would be misinterpreted as being anti-jobs or anti-growth.”

Starting in the early 2000s, however, explicit statements by FOMC participants of their inflation preferences became much more common and specific. Indeed, while the automated regular-expression search found only 50 matches from 1986 to 1999—and only two of those mentioned a specific inflation target—the search yielded several hundred matches from 2000 to 2013. Reading through the sections of text corresponding to those matches, we identified and tabulated each instance in which a participant expressed their own preference for a specific numerical inflation target or a narrow range such as between 1.5 and 2, which we would count as 1.75. Whenever possible, we identified target preferences regarding inflation as measured specifically by the PCE index. However, in many cases, the speaker did not specify the exact measure of inflation to which they were referring. Note that, because consumer price index (CPI) inflation generally ran about half a percentage point above PCE inflation over that period, if speakers referred to CPI it would imply a slightly lower PCE inflation target than we find.

Figure 1 plots the results of this narrative analysis. Each circle represents a stated preference, from the indicated speaker at the indicated FOMC meeting for a specific inflation target. The colors indicate the target value, ranging from 1.0 (light blue) to 1.5 (blue) to 1.75 (purple) to 2.0 (red). Speakers are sorted on the vertical axis according to the year they began their FOMC tenure, which is indicated by the gray shading. 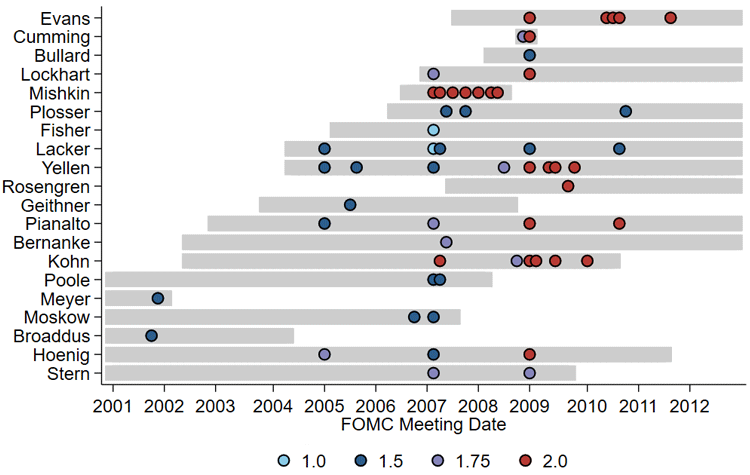 In total, we identified 58 statements of an inflation target preference, which are provided in the appendix of Shapiro and Wilson (2019). Of these statements, 20 expressed a preference for 1½%; 9 for either exactly 1¾% or between 1½ and 2%; 27 for 2%; and just two for 1%. However, aggregate counts mask a clear and important pattern over time. Statements in favor of a 2% target were non-existent before 2007 and did not become widespread until 2009, late in the recession. In fact, a single participant, Governor Frederic Mishkin accounted for all but one of the 2% statements before 2009. Indeed, Mishkin alluded to the fact that most other participants preferred 1½% at the October 2007 meeting: “People know that I am a 2% kind of guy, and I know good people here who are 1½% kinds of guys.”

Before the recession, 1½% was the overwhelming favorite among participants. The transition of the consensus favorite over the course of the recession is book-ended by the March 20-21, 2007, regular meeting and a conference call meeting on January 16, 2009. In March 2007, Chairman Bernanke asked FOMC participants if they thought the Fed should have an explicit numerical inflation target and, if so, what that target should be. Four participants expressed a preference for 1½%, three for between 1½ and 2%, two for 1%, and just one (Mishkin) for 2%. In the January 2009 meeting, seven out of the ten participants who voiced a specific preference desired 2%. Interestingly, most of those seven had previously expressed a lower preferred target. This suggests that, while the composition of the FOMC may have shifted during and after the recession toward individuals with higher inflation targets, at least some of the increase was driven by individuals changing their views on what the target should be.

The idea that the consensus inflation target from 2000 until 2007 or 2008 was 1½% seems to have been clearly recognized internally at the time, with Bernanke saying in the September 2006 meeting, “I’m bemused by the de facto inflation targeters that we have become here [laughter] with the 1.5% goal.” By 2009, the consensus seems to have shifted up to 2%. Of course, in January 2012, the FOMC officially codified the 2% explicit target in their public announcement (Board of Governors 2012). 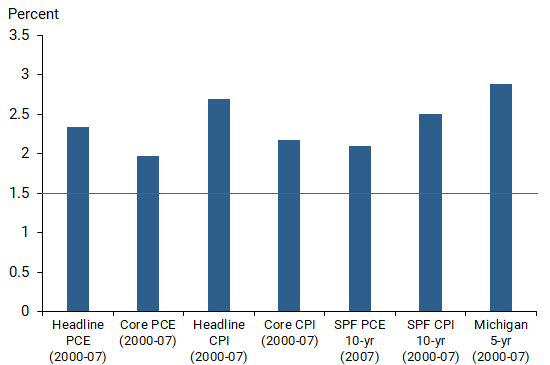 A narrative analysis of the historical FOMC meeting transcripts indicates that FOMC participants generally expressed a preference for an inflation target around 1½% from 2000 to around 2007. By the end of the Great Recession in 2009, however, the consensus had clearly shifted to 2%. This became the official target announced to the public in 2012. One plausible explanation for this shift is that hitting the zero lower bound in a low inflation environment brought the potential benefits of a higher inflation target to the forefront. As many academic studies and even FOMC participants have discussed, a higher inflation target could potentially lower the risk of hitting the zero lower bound in future recessions.

We also found that actual inflation from 2000 to 2007 was considerably above the 1½% consensus preferred target. Does this imply the FOMC failed in meeting its objectives during this period? Not necessarily. First, while FOMC participants may explicitly state in private their preferred rate of inflation, the committee’s monetary policy actions may be consistent with a different target. Second, the FOMC’s objectives may have included higher economic growth in addition to having inflation near its target, as found in Shapiro and Wilson (2019). With such multiple objectives, achieving higher growth over a given period could involve some trade-off with inflation being above target.

Daniel J. Wilson is a vice president in the Economic Research Department of the Federal Reserve Bank of San Francisco.

Full historical FOMC transcripts are available by year from the Board of Governors of the Federal Reserve System.

Board of Governors of the Federal Reserve System. 2012. “Statement on Longer-Run Goals and Monetary Policy Strategy.” January.