In June 2016, citizens of the United Kingdom voted to leave the European Union by a small majority. This looming departure became known as “Brexit.” As a consequence of the Brexit referendum, the British pound depreciated sharply, and overall inflation ramped up in the following months. Comparing price movements between tradable and nontradable goods shows that close to two-thirds of the inflation spike in the United Kingdom since the Brexit vote can be attributed to the sharp movement in the exchange rate.

Contrary to market predictions, British citizens voted to leave the European Union in June 2016, an event known as the Brexit vote. This raised uncertainties regarding the future of the British economy (Bloom et al. 2019), particularly for its trade relationships with European and global markets. As a result of the unexpected outcome, the British pound depreciated about 7% on the day of the referendum. The pound stayed at that level for nearly a year afterward, accumulating to a decline of about 14% compared with the prior year. Furthermore, the U.K. economy relies heavily on trade, with imports accounting for about 30% of its GDP. The large share of imported goods in the U.K. economy makes overall inflation rates particularly susceptible to fluctuations in the value of the pound.

In this Economic Letter we summarize how the Brexit referendum and the subsequent depreciation of the pound affected the aggregate inflation rate in the United Kingdom, based on research in Hobijn, Nechio, and Shapiro (2019). The exchange rate depreciation resulted in a significant increase in U.K. inflation. Because depreciation in a home currency makes foreign currencies more expensive, the increase in inflation was driven in large part by the higher cost of tradable goods. As a result, we estimate that Brexit’s effect on inflation peaked at 1.2 percentage points in the eight months after the Brexit vote. This increase accounted for about two-thirds of the total inflation pickup over those eight months.

Inflation and the pound

The value of a currency is linked to expectations of the currency’s future value and the country’s future economic conditions (Gourinchas and Hale 2017). Market participants and other institutions, such as the International Monetary Fund (WEO 2016), viewed the Brexit referendum as a sign that the U.K. economy was facing a long-term slowdown in growth. Those views suggested that the U.K. economy was very likely to face future challenges and that leaving the European Union would harm the country’s economic growth by increasing barriers to trade and labor flows (HM Treasury 2016). These predictions acknowledged that a monetary authority already facing low interest rates would have a limited ability to respond to uncertainty shocks. The probability of a longer-term slowdown in a country relative to its peers is commonly associated with a persistent weakening of its currency (Gourinchas and Hale 2017).

Figure 1 shows how exchange rate data reflected the worries and predictions of market participants. Following the Brexit vote, the British pound depreciated sharply. The Bank of England responded by cutting its policy rate 0.25 percentage point, but that did not curb the effects of expectations for a long-term slowdown in the economy. The figure depicts the daily value of the pound relative to its main trading partners and its sharp depreciation on the day the referendum outcome was announced. The dramatic plunge indicates how surprised market participants were with the outcome. It also verifies that market participants viewed the Brexit referendum as a negative shock to Britain’s economic performance. 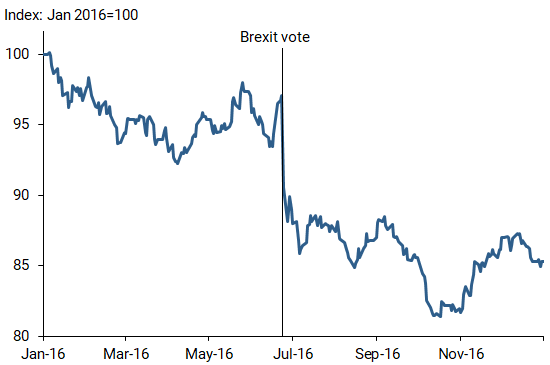 Changes to the value of a country’s currency typically have a direct impact on the prices for goods the country trades with other countries. The currency depreciation following the Brexit vote implies that the value of the pound declined relative to Britain’s trading partners. As the pound depreciated, imports of production inputs and wholesale products became more expensive for British businesses.

Businesses have several options when facing higher input costs. At one extreme, they can pass the full cost on to consumers as higher prices. At the other extreme, they can keep prices stable and absorb the increased cost through lower profit margins. The degree to which businesses adjust prices in response to changes in the exchange rate is known as exchange rate “pass-through.”

Many countries use the consumer price index (CPI) as a common measure of inflation, though different countries vary slightly in their calculation. Similar to other countries including the United States, the United Kingdom estimates its CPI by measuring the price level of a basket of goods over time. The basket is representative of U.K. consumer expenditures, and each item is weighted to reflect its share of total consumer expenditures. The headline CPI number is estimated as a weighted average of these items.

The blue line in Figure 2 reports U.K. inflation for all CPI items since 2010. The figure shows that, in the months following the Brexit referendum, aggregate inflation—as measured by growth in the CPI at an annual rate—shot up from just above zero at the time of the referendum to about 3% at the end of 2017. It has since trended downward, more recently hovering near 2% as of May 2019, which is equal to the target rate set by the Bank of England. Post-Brexit inflation rates have been well above the average inflation rate of the prior two years. 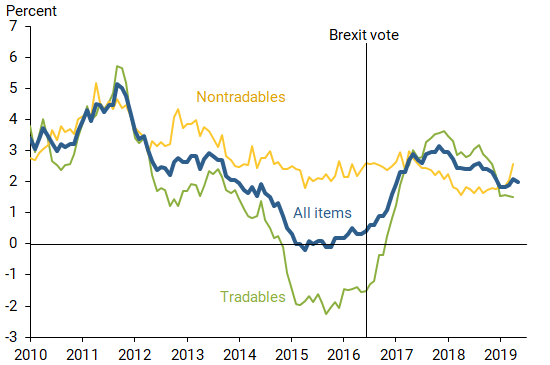 If the post-Brexit inflation pickup resulted mainly from exchange rate pass-through, then there is likely to be a discernible difference in how prices changed for tradable goods versus nontradable goods following the exchange rate shock. This difference would reflect that tradable goods are more susceptible to import price variations than nontradables, which include goods or services produced for use within the country, such as utilities, public services, hotel accommodations, local transportation, and real estate. Exploring this idea, in Figure 2 we separate headline CPI growth into tradables (green line) and nontradables (yellow line).

We next estimate more formally the degree to which exchange rate pass-through brought on by the Brexit vote affected headline inflation. We begin with data on price quotes published by the Office of National Statistics (ONS) in the United Kingdom to study the time around the Brexit vote. To determine which items in the price quote data would be most affected by the exchange rate shock, we use U.K. input-output data and the tradable and nontradable classifications outlined in Allington, Kattuman, and Waldmann (2005). We establish our baseline control group as those items that both have low import content according to the input-output data and are classified as nontradable by Allington et al. (2005).

We next turn to our “treatment” group of items that have both high import content and are classified as tradable. Since these items are the most likely to be affected by exchange rate pass-through, we use the treatment group as a proxy to estimate the pass-through effect on overall inflation. Specifically, we use regression analysis to estimate how the prices of items in the treatment group affected the overall CPI relative to the prices of items in the nontradables baseline. We estimate the relative impact of items in the treatment group over different lengths of time, or horizons, following the Brexit decision. Through these so-called difference-in-differences regressions, we isolate the impact the exchange rate pass-through had on overall inflation each month in the year after the Brexit vote. For more details on the methodology and data, see Hobijn, Nechio, and Shapiro (2019).

Figure 3 shows the results of these 12 difference-in-differences regression estimates. Since the treatment and baseline groups are akin to tradables and nontradables, respectively, the blue line traces the average price growth effect of tradable items minus nontradables in the 12 months after the Brexit vote. The shaded area around the line represents a 90% confidence band around our estimates, showing the range of the most likely results. 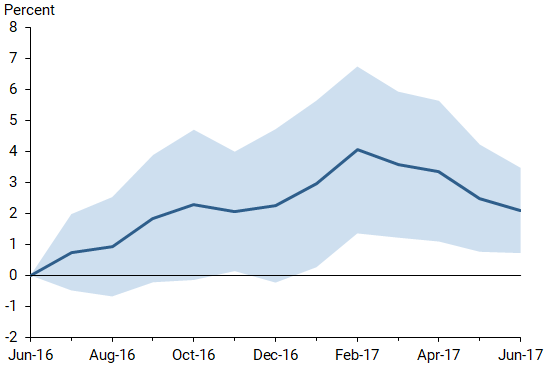 Figure 3 shows that prices for tradable items increased more than for nontradables following the Brexit announcement. Relative price growth peaked around 4% eight months after the vote and persisted for a full year after the referendum. Similar to the delayed pickup in aggregate inflation shown in Figure 2, Figure 3 shows a delayed relative growth effect that picked up several months after the Brexit vote and then remained somewhat persistent. This is further evidence that the aggregate inflation increase was being driven by price growth in tradable goods from exchange rate pass-through.

In addition to other short- and long-term macroeconomic effects, the highly unanticipated outcome of the Brexit referendum resulted in a period of relatively persistent increased inflation, which has so far lasted through the publication date of this Economic Letter. We estimate that about two-thirds of the inflation pickup in Brexit’s wake can be attributed to the increase in the prices of tradable goods. Furthermore, Brexit offers a unique case for studying the extent and persistence of the exchange rate pass-through effect; our evidence shows this pass-through came into full effect months after the initial shock and lasted for at least a year afterward. Policymakers can use this event to better understand how aggregate inflation responds to negative exchange rate shocks, particularly in countries that rely extensively on imported goods.

Neil Gerstein is a research associate in the Economic Research Department of the Federal Reserve Bank of San Francisco.

Bart Hobijn is a professor of economics at the W.P. Carey School of Business at Arizona State University.

Fernanda Nechio is deputy governor for International Affairs and Corporate Risk Management with the Central Bank of Brazil.

HM Treasury. 2016. HM Treasury Analysis: The Long-Term Economic Impact of EU Membership and the Alternatives. Presented to Parliament by the Chancellor of the Exchequer by Command of Her Majesty, April.