Unemployment is running near its 50-year low, but inflation has not picked up as expected. This suggests that the unemployment rate consistent with stable inflation has fallen. Combining a conventional Phillips curve tradeoff between unemployment and inflation with a noninflationary unemployment rate that can change over time shows that estimates of this unemployment threshold have declined toward 4% in recent years. One possible reason for this decline is improvements in how job matches are made, reflected in unusually favorable job-finding rates for disadvantaged groups.

The U.S. unemployment rate has been very low in recent years, running at or below 4% since early 2018. It reached 3.6% earlier this year, the lowest rate recorded since December 1969. In the past, such sustained low unemployment typically has been accompanied by rising rates of wage and price inflation. This Phillips curve relationship between low unemployment and rising inflation has been called into question since the Great Recession, raising the possibility that the historical monetary policy tradeoff between labor market conditions and price stability has faded. Alternatively, changes in labor market conditions may have lowered the unemployment rate associated with rising inflation. In other words, perhaps the policy tradeoff still exists, but the maximum employment metric has shifted.

As the economic expansion enters its eleventh year, businesses have continued hiring workers at a solid pace to meet the rising demand for the goods and services they produce. Job vacancies have reached new highs, and the pool of unemployed workers looking for jobs has shrunk toward historic lows. The result is a labor market in which it is increasingly difficult for businesses to find people to fill available positions. In principle, when the unemployment rate falls below a certain threshold, the tight labor market strengthens workers’ bargaining position and hence their ability to negotiate higher wages and better working conditions. This in turn can push up wages and other costs and eventually the prices of final goods and services. The more the unemployment rate falls below this threshold, the more wage and price inflation can be expected down the road.

Our empirical model relies on data for the period from 1985 through the first quarter of 2019. For inflation, we use one of the Fed’s preferred measures, the price index for personal consumption expenditures excluding food and energy, or core PCE. The unemployment measure is the overall rate for workers age 16 and over. 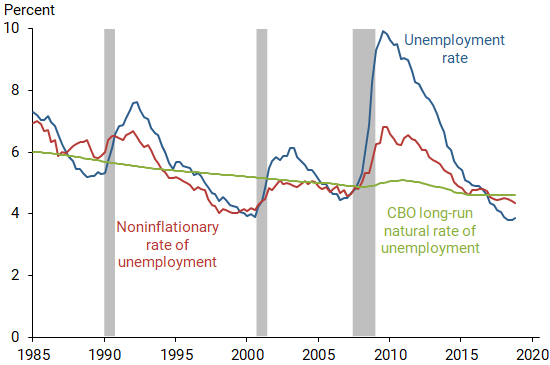 One possible source of the changes in the noninflationary unemployment rate is an improved matching process between job seekers and available positions (Daly et al. 2012). With better job matching, the number of unemployed people needed to fill existing vacancies falls, implying a lower sustainable unemployment rate. The most obvious manifestation of improved job matching is faster job-finding rates for people seeking employment.

Job-finding rates tend to rise during economic expansions, which may contribute to the cyclical variation in the noninflationary unemployment rate. This pattern is likely to be particularly pronounced for disadvantaged groups of people that face higher obstacles to achieving labor market success. In particular, recent research findings indicate that members of some disadvantaged racial and ethnic groups experience a disproportionate improvement in their labor market status as overall economic and labor market conditions strengthen (Aaronson et al. 2019).

We examine whether the pattern of relative gains for disadvantaged groups holds true for job-finding rates, similar to the findings of Aaronson et al. (2019) for other labor market outcomes such as labor force status and earnings. As in their work, we analyze three racial and ethnic groups separately by gender: white, black, and Hispanic, with the white group used as the baseline for comparison. Our analysis relies on individual data from the Current Population Survey, the monthly household survey conducted by the Bureau of Labor Statistics that is the basis for U.S. official labor force and unemployment numbers. We match individuals across consecutive months of the survey beginning in 1976 and extending through April 2019. This enables a detailed analysis of transitions between different labor force status categories. We focus on transitions from unemployment or nonparticipation in the labor force to employment. 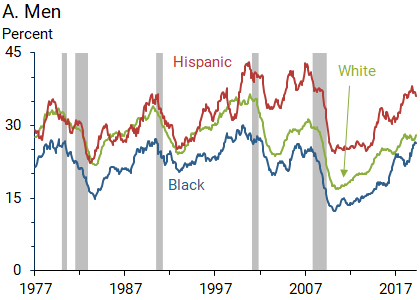 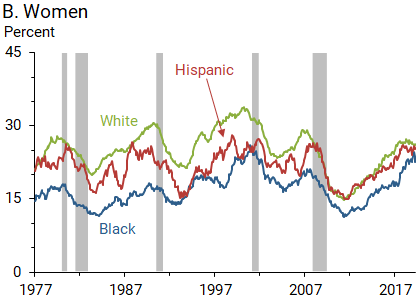 The visual impression from Figure 2 is strongly confirmed by a formal statistical analysis. We estimate regression equations that model the difference between the job-finding rates of the Hispanic and black groups and the white group as a function of business cycle conditions. We account for cyclical effects using the gap between the actual unemployment rate and either the CBO’s estimate of the long-run natural rate or our estimate of the noninflationary rate. We augment this basic regression by allowing for changes in the estimated cyclical relationship during periods when unemployment is very low, as it has been since early 2017. Our results (not shown) confirm with high statistical precision that the job-finding rates for the Hispanic and black groups have improved substantially relative to the white group among both men and women over the past few years. We find similar results for transition rates from nonparticipation rather than unemployment.

The unusual improvement in job-finding rates for disadvantaged groups in recent years suggests that the labor market is benefitting from an enhanced job-matching process. For example, these findings are consistent with relaxed hiring standards in response to the recruiting challenges employers face in a tight labor market (Modestino, Shoag, and Ballance 2016).

A key question facing monetary policymakers is how much a continuation of the current tight labor market might push up inflation. We discussed macro and micro evidence consistent with the view that the noninflationary rate of unemployment has fallen during the current expansion and is heading toward 4%. This can help explain sustained low price inflation despite an unemployment rate near historical lows. It also implies that despite the very low unemployment rate, the labor market may have more room to run without pushing up price inflation substantially.

Nicolas Petrosky-Nadeau is a senior research advisor in the Economic Research Department of the Federal Reserve Bank of San Francisco.

Robert G. Valletta is a group vice president in the Economic Research Department of the Federal Reserve Bank of San Francisco.