Measuring Connectedness between the Largest Banks

The financial crisis provided a stark example of how interconnected the financial system is. Since then, researchers have developed several ways to monitor patterns of connectedness within the banking system. A key challenge is removing the impact of conditions that affect all banks in order to highlight evidence of direct connectedness. A new measure filters these common factors from bank stock market data. Estimates using this method show how different assumptions can affect conclusions about the connections among banks.

In September 2008, the bankruptcy of Lehman Brothers quickly spread to other financial institutions, exposing the numerous connections throughout the financial system. Since then, researchers have explored how to understand and measure the various ways financial institutions are linked in hopes of avoiding similar crises. Linkages between banks arise from their transactions with each other as well as from having similar exposure on their balance sheets. Such linkages create a network, and the prevalence of linkages in the network as well as each bank’s importance in the network are known as network or bank “connectedness.”

Several measures of bank connectedness and vulnerability rely on market signals, such as stock returns, to infer in real time the degree of systemic risk associated with specific banks and the overall banking system. However, stock prices of different banks often move together due to common factors, such as market sentiment, that are unrelated to their individual performance.

To remove such common factors from bank stock returns, Hale and Lopez (forthcoming) propose a two-step procedure. In this Economic Letter, we use this procedure to measure how connectedness within the U.S. banking system can vary depending on the definition of the common factor used. Our aim is to show how this method can help assess financial network fragility as well as individual banks’ potential impact on the system and vulnerability to system shocks in real time.

To understand the difference between common factors and connectedness, think of financial institutions as boats anchored in the harbor. If the boats are tied together tightly, one boat sinking would likely take other boats down with it. However, because the rising and ebbing tides will rock all boats, regardless of how tightly they are linked, we need to filter out these common movements to measure the connectedness accurately.

Consider the following example. On February 2, 2018, the Federal Reserve announced a consent order with Wells Fargo (Board of Governors 2018) that restricted its asset growth due to compliance issues. This was followed by a 14% decline in Wells Fargo’s stock price by the following week. The announcement came at a time of unrelated heightened volatility in equity markets: the Standard & Poor’s (S&P) 500 dropped nearly 7% during the same time, affecting stock prices of other banks by about as much. If we focused only on bank stock prices on that day, we might erroneously conclude that the drop in Wells Fargo’s stock price had spread to other banks, suggesting a very high level of connectedness. If we took the overall market into consideration, however, we would be less likely to conclude that the Wells Fargo announcement had any direct spillovers to other banks.

Financial institutions may be connected in several ways. They can have direct financial exposure to each other through deposits with and loans to each other, holding each other’s securities, and trading with each other in derivatives markets. Banks can also be connected indirectly by making loans to the same borrowers or holding similar portfolios of assets.

Unfortunately, information on these direct and indirect linkages between banks is not readily available in real time. Banks provide accounting-based data on these linkages through required regulatory reports, but those reports are available infrequently, only to bank supervisors, and only for a handful of banks. For this reason, most measures of bank connectedness rely on the co-movements of bank stock prices from market data. Since stock prices are available at a high frequency for many businesses and reflect all information available to market participants, using market data to construct measures of connectedness makes sense.

However, a major drawback to relying on market data is the blended nature of common and firm-specific factors that affect stock prices. Because we want to measure the connectedness of individual banks, we need a method to filter out the common factors captured in market data.

We focus here on the 32 largest bank holding companies (BHCs) that are subject to the Federal Reserve’s annual stress-testing exercise. These banks encompass the largest BHCs in the country, account for more than 75% of all U.S. banking assets, and are subject to additional supervisory oversight given their potential to adversely affect the financial system’s stability. We analyze the period from January 2002 through June 2018 using a three-year rolling estimation window.

First, we extract a common component from individual BHC stock returns at a weekly frequency. We examine three different definitions of common market movements. The first two are  commonly used stock indexes: weekly returns on the S&P 500 market index and weekly returns on the Keefe, Bruyette & Woods (KBW) stock index that is based on the largest U.S. BHCs. For the third definition, we use a statistical method to extract the principal components from all of our sample BHC returns. After removing a common component from the bank stock returns using one of these three measures at a time, we examine the connectedness within the remaining idiosyncratic stock returns, which are the residuals from the regressions of each individual BHC stock returns on a comment component. 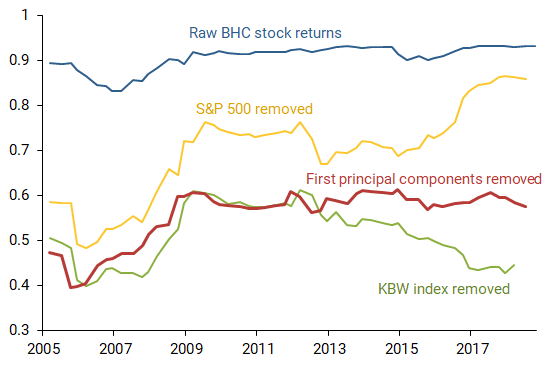 First, we compare the blue line, a connectedness measure based on raw BHC stock returns, with the other three lines that have common components removed. Because the raw measure does not adjust for the financial tides affecting all firms equally, it shows a high level of connectedness throughout the sample period. The measures that filter out the common component show a lower and more variable degree of connectedness.

Next, we compare the connectedness measures resulting from removing the three common components described previously. All three measures steadily increase through the Lehman crisis in 2008 and stay elevated until 2012; their dynamics begin to diverge starting in 2013, substantially so after 2015.

What accounts for these differences? Because some shocks hit only the banking industry, using the S&P 500 index as the common shock removes too little common variation, resulting in an exaggerated BHC connectedness measure. However, removing the influence of the KBW index could eliminate too much variation. To consider this, imagine that an idiosyncratic shock hits one of the largest banks in our sample, then spreads through an unobserved connectedness channel to other large banks. Since these banks constitute a large fraction of the KBW index, removing it would subtract a portion of this shock and its spillover, thus underestimating true bank connectedness.

Our principal components measure suggests a relatively steady degree of connectedness since 2009, which may reflect the introduction of new supervisory standards, the higher capital levels that BHCs have adhered to in the past few years, and their more risk-focused business stance since the financial crisis. As the first principal component is based solely on the BHC stock returns in our sample, this measure may be just the right adjustment, removing neither too much nor too little common variation relative to the stock market indexes. Accordingly, we prefer to consider this middle ground approach in constructing our measure of bank connectedness.

Comparing with other measures

Figure 2 graphs our results along with results from three other measures of bank connectedness based on market signals: conditional value-at-risk (CoVaR) by Adrian and Brunnermeir (2016), systemic risk (SRISK) by Acharya et al. (2017) and Brownlees and Engle (2017), and the distressed insurance premium (DIP) by Huang, Zhou, and Zhu (2012). We recompute our connectedness measure to use only the 11 BHCs that have the necessary data available for all four measures. Furthermore, to ease comparison across all the measures and over the whole sample period, we rescale the four measures to have a zero mean and a standard deviation of 1 for the entire sample. 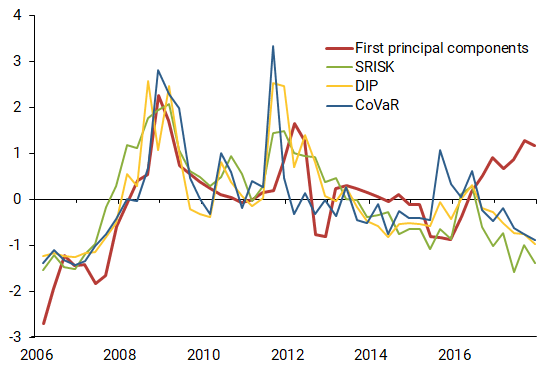 Note: Estimates are scaled to have zero mean and standard deviation of 1 for entire sample to ease comparison.

Measuring the connectedness of banks has become an increasingly important element of monitoring the overall stability of the financial system. In fact, it is one of the five attributes used to determine the capital surcharge that global, systemically important U.S. bank holding companies must apply to their required capital ratio (Board of Governors 2015). Several measures of bank connectedness are based on stock market data, which allows frequent monitoring. However, these methods also reflect conditions that are common to all banks. The method described in this Letter allows us to focus more precisely on the connectedness of idiosyncratic factors that are more likely to account for possible spillovers among BHCs. Our measure finds dynamics among banks that are similar to other proposed measures before 2015. However, our measure estimates that the connectedness among banks in recent years has been rising, which other measures have not captured.

Jose A. Lopez is a vice president in Financial Institution Supervision and Credit at the Federal Reserve Bank of San Francisco.

Shannon Sledz is a research associate in the Economic Research Department of the Federal Reserve Bank of San Francisco.

Board of Governors of the Federal Reserve System. 2015. Calibrating the GSIB Surcharge. White paper, July 20.

Board of Governors of the Federal Reserve System. 2018. “Press Release,” February 2.