By most measures, the U.S. labor market is currently quite strong, with several industries even experiencing labor shortages. The U.S. unemployment rate has steadily declined since the end of the Great Recession and ran below 4% in the second half of 2018. Many forecasters expect unemployment to fall further, even after factoring in the recent volatility in the financial markets and declines in stock prices. The median projection from the Federal Reserve’s Summary of Economic Projections (SEP) sees the unemployment rate hitting 3.5% by the end of 2019, a level not seen since 1969. Other labor market indicators, from broader measures of unemployment to job quit rates or the rate of job vacancy postings, have also been strong and point to a tight labor market. Strong demand for workers in a tight labor market should push up wages. Yet, while wage growth has increased since the end of the Great Recession, the increase has been surprisingly modest relative to the pace of labor market tightening.

In this Economic Letter, we reassess whether ultra-low unemployment rates cause sharp increases in wage growth using state-level data. Some other recent studies also have looked at this question. Nalewaik (2016) used national time series data and found no evidence of an economically meaningful nonlinearity. However, one might argue that national data have little power to answer this question because unemployment rates well below 4% have rarely been seen in the past 50 years.

By contrast, U.S. states regularly experience unemployment rates lower than 4%. Hence, in this Letter, we examine the relationship between wage growth and unemployment using state-level data. We go beyond finding simple correlations and use a statistical approach to identify the causal effect of unemployment rate changes on wage growth. We find little evidence of nonlinearities.

A first look at the data 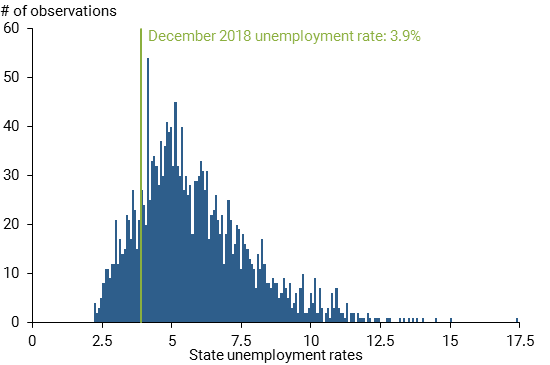 Given such ample variation in state unemployment rates, particularly at ultra-low levels, we can better assess whether wage growth rises sharply when labor markets turned hot, as is the case today.

In estimating the wage Phillips curve, we adjust state wage growth and state unemployment rates by subtracting their national averages; this removes any influence of global or national factors, like monetary policy or oil prices, that vary by year. These so-called “year fixed effects” could affect both wage growth and the unemployment rate, making it harder to interpret the resulting correlation. We also adjust for “state fixed effects” — characteristics that lead to permanent differences between states—by subtracting state-specific averages across all years. In addition, growth in labor productivity can affect nominal wage growth. Since labor productivity can vary within a state over time, it would not be captured by state fixed effects, so we account for this separately. Finally, we control for lagged wage growth, which tends to be slow to adjust to changes in the labor market. 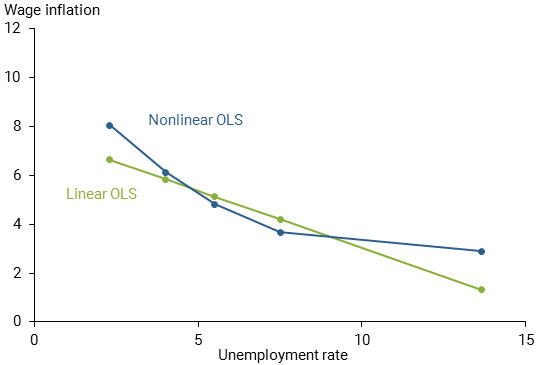 By contrast, the nonlinear version (blue line) allows the slope of the curve to change at different levels of the unemployment rate. The “knots” of this spline—that is, the levels of the unemployment rate where the slope of the Phillips curve is allowed to change—are indicated with circles. We grouped state unemployment rates into four groups: below 4.0%, between 4.0 and 5.5%, between 5.5 and 7.5%, and above 7.5%. We are most interested in the group below 4.0%, which represents ultra-low rates like those forecast nationally.

The OLS results, however, are just a correlational analysis. They do not necessarily reveal the causal effect of unemployment rate changes on wage growth; this information is important for policymakers who are concerned that stimulative monetary policy that boosts aggregate demand and lowers the unemployment rate could spark a sharp rise in wage growth and, in turn, inflation. 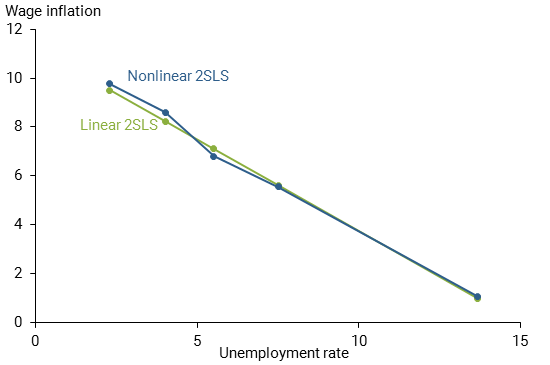 In sum, a careful look at the wage Phillips curve across states yields little evidence supporting the contention that wage growth sharply rises as the labor market reaches especially tight conditions. Of course, the current period may be different from the past. For instance, the typical pattern of local wage growth in a tight local labor market may differ when all other nearby labor markets are experiencing similar tightness, as is currently the case. As a result, geographical labor mobility—which can mute wage pressures in tight markets as workers are attracted to higher-wage areas—may be playing less of a restraining role. With this caveat in mind, given the historical experiences of states in recent decades, we do not foresee a sharp pickup in wage growth nationally if the labor market continues to tighten as many anticipate.

Sylvain Leduc is director of the Economic Research Department of the Federal Reserve Bank of San Francisco.

Chitra Marti is research associate in the Economic Research Department of the Federal Reserve Bank of San Francisco.