Nonmanufacturing as an Engine of Growth

Recent debates surrounding trade policies raise questions about the consequences for the U.S. economy, particularly for manufacturers. Manufacturing is widely believed to be the main engine of aggregate productivity growth (see, for example, Sharma 2018). This belief is driven in part by studies using official statistics that show manufacturing has played an outsized role in driving productivity growth, even as its share of employment has steadily shrunk in advanced economies since 2000 (see Santacreu and Zhu 2018).

However, official statistics may not fully capture productivity growth stemming from creative destruction, as an earlier Economic Letter by Klenow and Li (2017) argued. This source of missing growth is likely to be larger for sectors outside of manufacturing, as shown by Aghion et al. (2019). I apply this analysis to reevaluate the contribution of nonmanufacturing to U.S. productivity growth in recent years in this Letter. I find, indeed, that official statistics may have drastically understated the contribution of nonmanufacturing to U.S. economic growth.

To evaluate official measures of productivity growth for different sectors, I use Bureau of Labor Statistics (BLS) data. I compare the contribution of nonmanufacturing over 1996–2005, when the United States had high aggregate productivity growth, to 2006–2013, when productivity growth was lower. The data end in 2013 to match the availability of data for calculating missing growth in Aghion et al. (2019).

The BLS classifies economic activities into 11 sectors: manufacturing, agriculture, mining, utilities, construction, wholesale trade, retail trade, transportation and warehousing, information, FIRE (finance, insurance, and real estate), and services, which contains producers not classified in the other sectors. For example, restaurants and hotels are in services, but banks are in FIRE, and Amazon is in retail trade.

I report growth individually for the three sectors with the largest employment shares—manufacturing, retail trade, and services, and combine the remaining sectors except for agriculture, which is not reported in Aghion et al. (2019). The three largest sectors accounted for almost 80% of private-sector nonfarm employment on average between 1989 and 2013. Growth in a sector is calculated as the difference between output growth and input growth in a sector adjusted for inflation; inputs are goods, capital, and labor used for production. 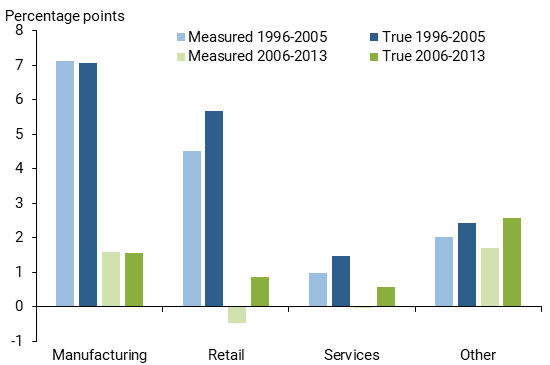 Figure 2
Measured vs. estimates of true contributions to total growth 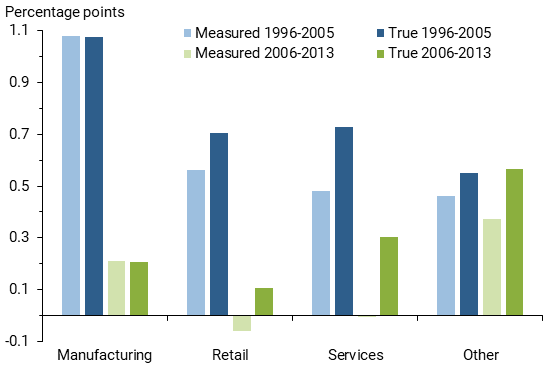 The findings based on official BLS data are in line with the conventional thinking that manufacturing is the main engine of U.S. productivity growth today as it was in the past. However, Aghion et al. (2019) found that official statistics understate growth in sectors outside of manufacturing.

They consider two types of innovation: creative destruction and in-house. Creative destruction involves new producers taking part of the market share from existing producers by creating products that are either of higher quality at a similar price or similar quality at a lower price. For example, new retail stores and restaurants enter the market by adding establishments. This is an example of creative destruction in that new stores capture market share from existing local stores. In contrast, the second type involves existing producers improving their own products through research and development. For example, Intel rolls out faster CPUs (central processing units) every year.

In manufacturing, new innovative products often emerge in-house from existing firms and are produced by existing production plants. On the other hand, in nonmanufacturing sectors, innovation tends to occur more frequently through creative destruction. Official statistics can measure in-house innovation with various methods, but it is more difficult to evaluate productivity improvement from creative destruction because the creatively destroyed products often disappear. As a result, official statistics may miss more growth from nonmanufacturing sectors and understate their contribution to total growth.

To adjust for missing growth, I use the results from Aghion et al. (2019), who calculated missing growth using the change in the market share of incumbent producers based on employment share. The idea behind this approach is that changes in market share reflect how innovative incumbents are relative to new producers. Standard measurement assumes they are equally innovative, which implies stable incumbent market share. A shrinking incumbent market share is a sign that these existing producers are not as innovative as new ones, which in turn would imply that standard measurement understates growth from creative destruction. For a summary of the method I use, see Klenow and Li (2017).

The darker blue and green “true” bars in Figure 1 display the sum of measured growth and the missing growth in each sector as reported in Aghion et al. (2019). The true manufacturing bars are very close to the measured bars. That is, manufacturing has very little missing growth in both periods. On the other hand, the retail trade and services sectors have significant missing growth. For example, the early period shows that 0.5 percentage point of growth is missed in the services sector. According to Aghion et al. (2019), much of this missing growth comes from accommodations and restaurants, where the net entry of establishments tends to be quite rapid and contributes to high levels of creative destruction. There is a similar gap between the measured and true numbers for services, suggesting that missing growth in services has persisted into the low-growth period. 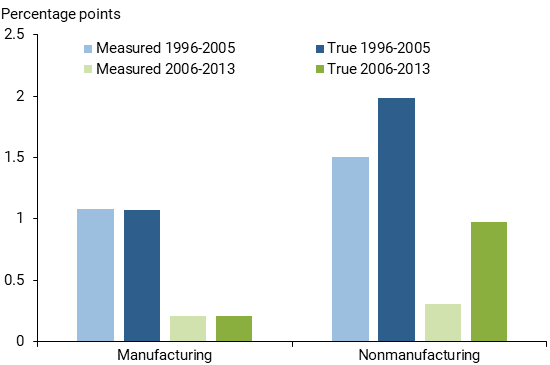 What if the nonmanufacturing share of employment did not increase?