Why Is the Fed’s Balance Sheet Still So Big?

The Federal Reserve’s balance sheet is significantly larger today than it was before the financial crisis of 2008–2009. Rising demand for currency due to greater economic activity is partly responsible for this increase. The balance sheet will also need to remain large because the Federal Reserve now implements monetary policy in a regime of ample reserves, using a different set of tools than in the past to achieve its interest rate target.

The financial crisis and Great Recession left a large imprint on the economy. One of the lasting effects has been the size of the Federal Reserve’s balance sheet, which grew substantially as the Fed responded to the country’s economic needs during the crisis and recovery.

Earlier this year, the Fed described new plans for how the size of its balance sheet will evolve (Federal Open Market Committee 2019a,b). These plans include a timeline for decreasing the size of the balance sheet and how monetary policy will be implemented going forward. The Fed’s decision partly reflects an assessment that, over the past 10 years, conducting monetary policy with a large balance sheet has been successful and has provided financial stability benefits.

This Economic Letter discusses this choice and other factors underlying the increase in the Fed’s balance sheet since the Great Recession. In particular, it highlights that, in line with a growing economy, the amount of currency in circulation has increased so much that it is not possible to shrink the balance sheet to its earlier size. We then discuss how this larger size affects the Federal Reserve’s conduct of monetary policy, contrasting the implementation of monetary policy before and after the financial crisis.

Like any other financial institution, the Fed has a balance sheet with two sides: assets and liabilities. Before the crisis, the Fed’s balance sheet was roughly $870 billion dollars, or about 7% of GDP. This size largely reflected the amount of currency in circulation, which was by far its biggest liability at the time.

To understand the importance of currency, it is essential to highlight that one of the Fed’s responsibilities is to meet demand for cash in the economy. If a bank needs more currency to distribute to its customers, it requests that amount. The Fed then ships that amount and debits the bank’s account at the Fed. As a result, that bank’s reserves held in its Fed account decline. This process can also work in reverse, which explains why currency in circulation is a liability for the Fed. For instance, a bank can return excess currency to the Fed, in which case the Fed credits the bank’s account, and the bank’s reserves increase.

Another important liability results from the fact that the Fed is the banker for the U.S. Treasury. The Treasury has a general account at the Fed, much like a business has an account at a bank. The government’s income and expenses flow into and out of that account. As a result, the U.S. Treasury’s deposits are a liability on the Fed’s balance sheet. In addition, a number of government-sponsored enterprises—for instance, Fannie Mae and Freddie Mac—hold deposits at the Fed that are Fed liabilities.

As shown in the first bar of panel A in Figure 1, the Fed’s largest liability in 2007 was currency in circulation. There were other liabilities, such as deposits from government-sponsored enterprises and reverse repurchase agreements, but these were relatively small. The Fed held assets of essentially equal value (first bar of panel B), mostly short-term Treasury securities.

This picture has changed substantively since 2007. The right-hand bars in the two panels of Figure 1 show the balance sheet as of March, 2019. First, the size more than quadrupled to about $3.9 trillion, or about 18.5% of GDP. In contrast to the period before the financial crisis, bank reserves now constitute over 40% of Fed liabilities, about as much as currency in circulation.

This change was largely triggered by the response to the financial crisis, the Great Recession, and the ensuing slow recovery (Rudebusch 2018). As economic activity weakened in 2007 and 2008, the Federal Open Market Committee (FOMC) lowered the federal funds rate, the overnight interest rate that it targets to steer the economy, to essentially zero. As the economy continued to weaken and with financial markets impaired, the Fed started buying longer-term assets, such as 10-year bonds from the Treasury and mortgage-backed securities from government agencies. To pay for these assets, the Fed credited the accounts of the sellers’ banks at the Fed, thus increasing those banks’ reserves.

Now that the crisis is in the rearview mirror and the current expansion is nearing the longest on record, is it possible to go back to having a balance sheet as small as in 2007? The answer is no. The amount of currency in circulation has grown so much that it is not possible to shrink the balance sheet to its earlier size. This is good news because it reflects a growing economy. The larger balance sheet also reflects banks wanting to hold more reserves at the Fed. Banks partly hold these highly liquid and essentially risk-free assets to meet new liquidity regulations designed to improve the resilience of the overall financial system. 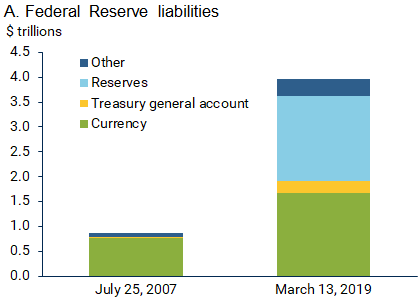 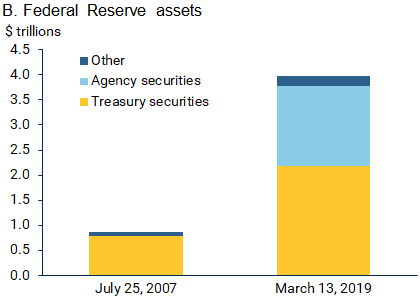 Still, the larger balance sheet also reflects a recent Fed decision to conduct monetary policy using an ample supply of reserves. To better understand this decision, it is helpful to consider how monetary policy was implemented before the financial crisis.

Since reserves in the system were relatively scarce before the crisis, the supply intersected with the demand on the steep part of the curve, as shown by the vertical line in panel A. By varying the supply of reserves, the Fed could set the federal funds rate at the desired level to encourage the economy to move in the right direction.

In contrast, the FOMC recently decided to implement monetary policy in a system with ample reserves. This continues the practice since 2008, which has provided reliable control over short-term interest rates. The vertical line in panel B shows that the supply of reserves intersects the flat part of the demand curve. On this flat part, banks are essentially indifferent about holding even higher levels of reserves at that federal funds rate. However, note that the curve flattens before the federal funds rate reaches zero. This is because, since October 2008, banks can earn interest on the excess reserves (IOER) they hold at the Fed. This means banks have no incentive to lend reserves at a rate below the IOER set by the Fed. As a result, other interest rates should be higher than the IOER. 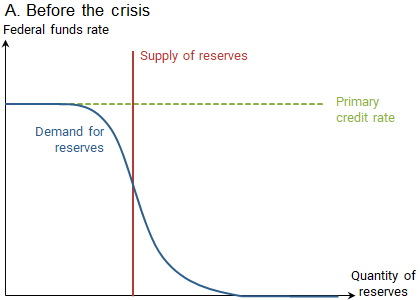 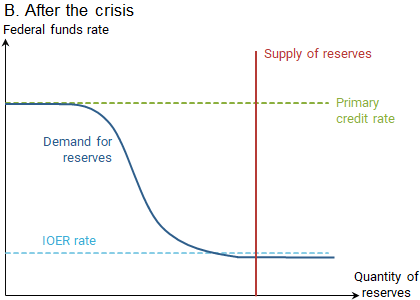 For most of the post-crisis period, the federal funds rate has sat slightly below the IOER rate. This is because government-sponsored enterprises such as the Federal Home Loan Banks—financial institutions that make loans to banks to support housing lending—can lend in the federal funds market but do not earn IOER. In principle, banks could borrow more from these institutions and earn a profit by investing the amount in reserves at the Fed. This arbitrage should equalize the federal funds rate and the IOER over time. However, new financial regulations make this trade costly, resulting in a gap between the two rates. Since this gap tends to be limited, the Fed can still affect the economy by varying the IOER rate and a supporting rate called the overnight reverse repo rate.

Why did the FOMC decide to continue with the post-crisis framework rather than return to the old way of implementing policy? A big reason is that experience has shown that the Fed can reliably control short-term interest rates using this framework. For instance, as the recovery strengthened, the Fed was able to raise interest rates by increasing the IOER and overnight reverse repo rate.

Despite this benefit, there is still a desire to avoid having an unnecessarily large balance sheet. The goal is to operate on the flat portion of the demand for reserves as in panel B of Figure 2, yet be as close as possible to where the curve steepens. As long as reserves stay in this region, the Fed can continue implementing policy as it has since the crisis, but avoid having an overly large balance sheet that might have costs (see Plosser 2019 for an overview). The current policy for reducing the balance sheet is aimed at slowly reducing the level of reserves toward that point, while still leaving a buffer to avoid operating on the steep part of the demand curve for reserves.

The size of the Fed’s balance sheet will not return to its pre-crisis level. One reason is that the Fed recently decided to conduct monetary policy in a regime of ample reserves, which necessitates a larger balance sheet. This regime has financial stability benefits and minimizes the uncertainty about the Fed’s control over the stance of monetary policy. However, even without this change in operating procedures, the Fed could not shrink its balance sheet to its pre-crisis level. This is a good development since it reflects an increase in the demand for currency, a liability on the Fed’s balance sheet, driven by the soon-to-be longest expansion in U.S. history.

Sylvain Leduc is executive vice president and director of the Economic Research Department at the Federal Reserve Bank of San Francisco.