Research has revealed several facts about financial crises based on historical data. Crises are rare events that are associated with severe recessions that are typically deeper than normal recessions. They are usually preceded by a buildup of system imbalances, particularly a rapid increase of credit. Financial crises tend to occur after prolonged booms but do not necessarily result from large shocks. Recent work shows a novel way to replicate these facts in a standard macroeconomic model, which policymakers could use to gain insights to prevent future crises.

The 2007–09 financial crisis made it plain that, even for developed economies like the United States, severe financial disruptions can drag down a whole economy. The crisis and the slow recovery that followed have sparked an explosion of research that aims to account for the tight linkages between the financial sector and the macroeconomy. Such research is important to policymakers since it could help avert future crises or provide guidance to ameliorate their effects.

Financial crises are characterized by a sudden and widespread decline in asset values, a sharp deviation from normal financial market functioning, and a severe tightening of credit that leads to a contraction in economic activity. Before the 2007–09 crisis, the workhorse macroeconomic models used by many central banks around the world largely excluded financial institutions and, therefore, did not account for the possibility of such events. Over the past decade, many advances have addressed these shortcomings. However, up to this point, a common approach to integrate financial crises into macroeconomic models has not yet emerged.

In this Economic Letter, I argue for applying a useful guiding principle: models that researchers use to understand financial crises should be able to replicate stylized facts gathered from historical data. I focus on four important facts about crises. Matching these patterns within a single model is an important challenge for realistic macroeconomic models of financial crises. I outline recent work by Paul (2019) that aims to address this issue and presents a framework that is able to match key features of crises in the data.

Crises are rare events. On average, crises occur about every 25 years or even less frequently. In contrast, a new recession typically starts around every 8 years. This first fact already poses an immediate challenge when studying financial crises empirically. To obtain enough observations to study common patterns around crises, researchers need large data sets. That is, data sets have to cover many countries and reach back decades. Hence, research usually relies on historical sources and often involves tedious archive work.

Credit booms tend to precede crises. A wide range of historical studies have shown that financial crises are not entirely random events that are unrelated to macroeconomic conditions. By contrast, crises typically occur at the end of an expansion, after a prolonged buildup of macrofinancial imbalances.

One key determinant of crises that has emerged is aggregate credit issued to nonfinancial firms and households. For example, Schularick and Taylor (2012) found that aggregate credit growth is a reliable early-warning indicator. Figure 1 illustrates this pattern, showing the annual percentage change of credit in the years before and after crises based on data for 17 advanced economies from 1870 to 2013. In the run-up to a crisis, credit typically expands quickly, falls sharply around the outbreak, and remains depressed in the aftermath.

Financial crises are associated with severe recessions. Once a financial crisis breaks out, output typically declines more strongly than during a normal recession. Also, the fall in output is even stronger if the crisis is preceded by a buildup of credit, as found in Jordà, Schularick, and Taylor (2013). For example, GDP falls around 30–50% more during a typical financial crisis recession compared with a normal recession (Paul 2019). A potential explanation is that the availability of credit tightens around the outbreak of a crisis that affects economic activity, as Figure 1 shows. 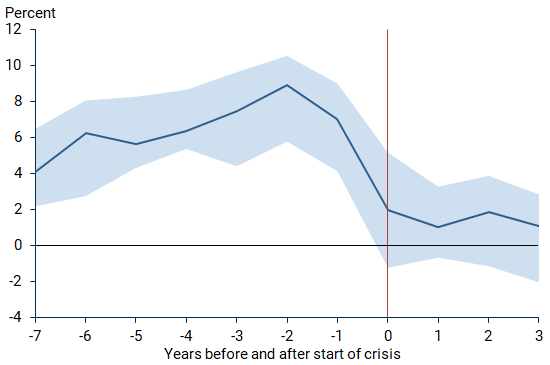 The ultimate triggers of crises can be relatively small. Even though output falls sharply during a crisis, this may not simply be due to a large shock that has hit the economy. For example, Gorton and Ordonez (2014) argue that the losses from mortgage-backed securities in the 2007–09 financial crisis–which was the relevant shock for the financial sector around that time—were actually quite modest. The U.S. financial system may have been particularly vulnerable to small shocks around 2007, so a similar trigger at another time might not have resulted in such a large disruption to the financial system.

To sum up, crises display the following characteristics: they are rare events that are typically preceded by a buildup of credit, are associated with deeper recessions than normal, and are not necessarily triggered by large shocks. These empirical facts about crises pose challenges to macroeconomic models. Why does financial fragility build up in good times when credit expands? Also, what propagation mechanism turns shocks that are not particularly large into severe macroeconomic events?

Folding these facts about financial crises into a macroeconomic model is an important challenge for researchers. The approach I describe here is based on Paul (2019), while Boissay, Collard, and Smets (2016) present an alternative framework that emphasizes a different set of financial market mechanisms. The model in Paul (2019) focuses on the interactions between households, banks, and nonfinancial firms. All three play a key role in the chain of financial intermediation. Households save by depositing funds in banks. In turn, banks redirect household savings to help finance business activity. Hence, in the model, banks stand in for the joint financial intermediation activities of the modern financial sector.

Next, imagine a scenario in which the economy is booming and businesses are particularly productive. During a boom, households receive additional income. However, they prefer to save part of it to smooth their consumption over time. In turn, banks convert the additional deposits into new lending to businesses. Hence, banks expand their balance sheets during prolonged booms. They increase both their assets through loans to businesses and their liabilities through increased household deposits. As in the data, banks also raise their leverage—that is, the ratio of liabilities to assets during prolonged expansions. However, by increasing their leverage during the boom, bank balance sheets also become more fragile since banks borrow more relative to the value of their assets. In this way, financial instability can build during good times when credit expands.

The boom turns into a bust when businesses become less productive and the economy slows down. During the slowdown, more businesses are unable to repay their loans, and their decision to default puts pressure on bank balance sheets. When banks’ assets fall in value due to the increased chance of default, then their leverage—the ratio of liabilities to assets—spikes up sharply.

The rise in leverage increases the risk that banks will not pay households back in full in case there is a run on the bank. To prevent runs and therefore bankruptcy, banks strongly cut back on their lending by liquidating outstanding loans inefficiently and reducing new lending. In this way, banks are able to generate additional liquidity that could be used to pay back deposits and therefore prevent households from running on banks. However, the early liquidation of loans and the subsequent ending of the underlying investment projects causes aggregate investment and output to drop sharply. Through this mechanism, the model turns moderate adverse shocks into large macroeconomic effects.

Simulations provide evidence that the model is able to match the four facts about crises. First, crises in the model occur as frequently as in the data. Second, a prolonged and credit-fueled boom characterizes the typical path leading to a crisis as illustrated in Figure 2, panel A. Third, the resulting crises are as severe as in the data. Fourth, crises are usually triggered by a relatively moderate adverse shock, but output still falls sharply due to the early liquidation of investment, as illustrated in Figure 2, panel B.

Figure 2
How do overall credit and output behave before and after financial crises? 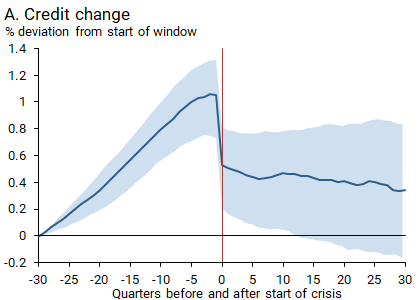 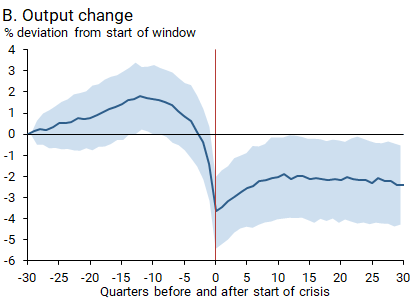 In addition, the mechanisms through which financial fragility builds up and a crisis materializes are empirically validated. First, the leveraging behavior of banks that explains why financial instability increases in good times is supported by the data. Leverage of U.S. financial intermediaries valued at market prices is mildly procyclical—that is, it is positively correlated with economic activity—in the model and in the data.

Second, recent evidence by Chodorow-Reich and Falato (2017) shows that overall credit during the 2007–09 financial crisis contracted primarily because banks renegotiated the loan terms or accelerated repayment on existing credit, as is the case in the model I have described. Thus, taken together, the model is able to match key characteristics of financial crises in the data, and the mechanisms through which that is achieved are empirically supported.

This Economic Letter describes four empirical facts about financial crises: (1) crises are rare, (2) they occur out of credit booms, (3) they are severe macroeconomic events, and (4) they are not necessarily the result of large shocks. Macroeconomic models of financial crises should replicate all of these features to accurately reflect what occurs around a typical crisis. The model in Paul (2019) reproduces these real-world regularities and illustrates how standard macroeconomic models can be extended to incorporate occasional financial crises. Such a framework provides a suitable laboratory for additional research that can help policymakers understand how to reduce the likelihood and the severity of future crises.