U.S. productivity is growing slower than in the past. Meanwhile, sales have become increasingly concentrated in the largest businesses. Analysis suggests that IT innovation may have facilitated the rise in concentration by reducing the cost for large firms to enter new markets. This contributed to booming productivity growth from 1995 to 2005. Though large firms are more profitable, their expansion may have increased competition and reduced profit margins within markets. Lower profit margins in a given market could have deterred innovation, eventually lowering growth.

Recent productivity growth in the United States is slower than the postwar average. Meanwhile, sales and production in U.S. industries have become more concentrated in a few large firms (Autor et al. 2019). Some people contend that the high level of concentration discourages innovation and has contributed to the slowdown in productivity growth. This concern has been behind several recent proposals to break up large firms or limit their further growth.

Market concentration is the degree of competition among businesses within a certain industry; a high concentration reflects that a few businesses dominate the market. One intuitive way to measure this concentration is by calculating the share of overall sales among the largest companies. Figure 1 displays publicly available data for the top 20 retail firms’ market share over time. In the early 1980s, their share accounted for less than 30% of sales each year. This steadily increased to over 50% by 2012. Using confidential firm-level data, Autor et al. (2019) found similar increases in concentration across all sectors of the U.S. economy; thus, Figure 1 can be considered broadly representative of economy-wide trends. 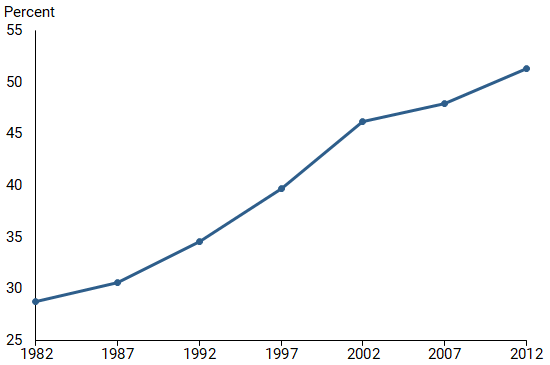 While concentration has increased steadily, productivity growth has fluctuated. Figure 2 is based on the San Francisco Fed’s total factor productivity (TFP) growth data, which measures the difference between output growth and growth in inputs such as capital and labor. Productivity growth is positive when output grows at a faster pace than the growth of physical inputs used in production. This can happen when technology improves. In the figure, we average the raw TFP data over eight-year periods to remove short-term fluctuations and highlight the slower significant technological improvements. 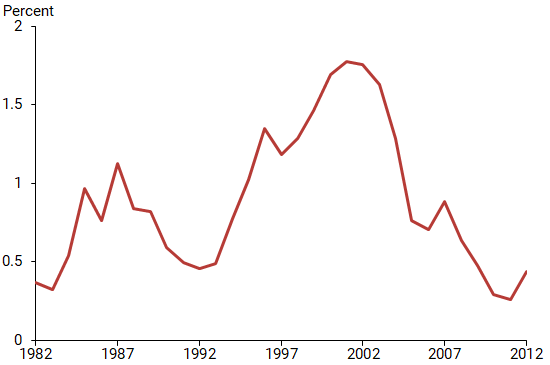 The IT revolution: Concentration and productivity links

To address this puzzle, Aghion et al.  (2019) argue that the concentration and U.S. productivity growth patterns as seen in Figures 1 and 2 are driven by a common factor: the IT revolution. New technologies that increased computing power and connectivity reduced the cost for businesses to operate in multiple markets. This enabled large retailers like Walmart to manage distribution networks more efficiently. For example, Holmes (2011) provided evidence that an efficient distribution plan was important for Walmart’s expansion; similarly, Crouzet and Eberly (2019) and others provided evidence that large companies invested a higher share of their revenue in IT. To the extent that businesses qualify as large because they are more productive on average within each market or product category, the expansion of such firms should have contributed to the burst of productivity growth from 1995 to 2005.

Figure 3
Growth in number of establishments per firm by size 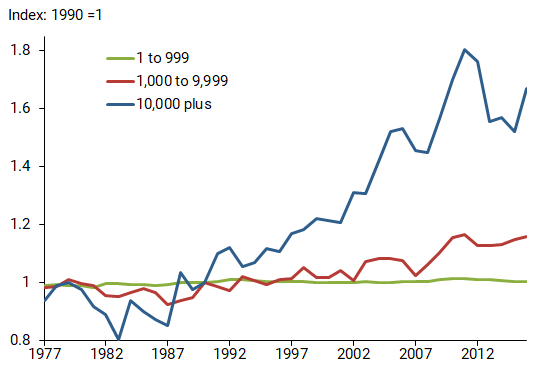 A complex relationship between competition and innovation

For the first link, Aghion et al. (2019) argue that firms choose to innovate and introduce new products when the potential profit exceeds the cost of innovation. As a result, the costs of maintaining an additional product or market affect the degree of competition because such costs are akin to innovation costs. High costs discourage firms from innovating to enter new markets and shield existing businesses from competition. When the IT revolution first hit, it reduced the costs of adding new products and encouraged firms to innovate. As large firms expanded, however, they became more and more likely to compete with each other. For example, as Walmart and Target added new locations, they eventually became closer neighbors and competed more directly with each other. Similarly, as Amazon, Apple, and Netflix expanded innovations in video streaming, they began to compete with each other.

However, why does more competition reduce long-run growth? The second leg of the Aghion et al. (2019) hypothesis is that an increase in competition among efficient firms may have lowered how much profit could be gained from further innovation. This, in turn, may have resulted in a slowdown of innovation activities and productivity growth. Indeed, using firm-level data from the Census Bureau, Autor et al. (2019) find the rise in concentration was accompanied by decreasing profit margins within firms.

Figure 4
Relationship between innovation and competition 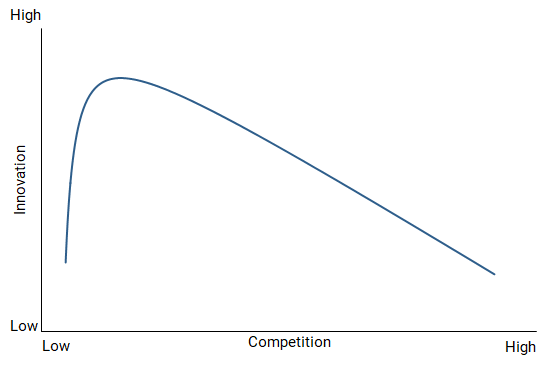 The reason for the changing relationship between innovation and competition is that they are both driven by changes in the cost of adding new products, which have two opposing effects on the incentives for firms to innovate. On one hand, lower cost directly reduces the cost of adding a new product and encourages firms to innovate. On the other hand, as firms expand, they become more likely to compete against each other through lower prices, which reduces their profit margins. Lower profits discourage innovation. The net impact on innovation depends on which effect dominates. When the initial level of competition is low and there are many untapped markets, the effect supporting innovation dominates. When the initial level of competition is high and there are few untapped markets, however, there is less support for innovation.

Of course, there are other theories for why competition and innovation may have a complex relationship. Aghion et al. (2005) originally theorized that firms competing neck and neck would have a high incentive to innovate to escape competition and earn monopoly profits. They provided evidence for such a relationship across industries. This theory contrasts with the classic hypothesis that higher existing monopoly profits encourage innovation.  The bottom line is that the relationship between concentration, competition, and productivity growth is subtle: rising concentration does not necessarily imply declining competition, and more competition does not necessarily stimulate growth.

This Letter argues that the IT revolution contributed to the rise in U.S. market concentration over the past few decades. IT improvements may have enabled efficient firms to expand into new markets and set the stage for the burst of productivity growth in the decade leading up to 2005. The expansion of large firms also may have intensified competition and cut into profits, discouraging them from innovating within markets. This, in turn, could have contributed to the eventual slowdown of productivity growth in recent years.

Our hypothesis underscores the potential tradeoffs for policymakers when considering limiting the growth of large firms. On the one hand, curbing the expansions of large firms can be detrimental to growth in the short run because large firms may be able to provide goods and services at a lower cost. However, curbing their expansions may also sustain profit margins that provide incentives for innovation and stimulate long-run growth. The net impact depends on an array of unknown factors including consumer preferences. Policymakers need to gain a fuller understanding of the tradeoffs to formulate appropriate policy and avoid potential unintended consequences.

Peter J. Klenow is a professor of economics at Stanford University and a visiting scholar in the Economic Research Department of the Federal Reserve Bank of San Francisco

Theodore Naff is a research specialist at the National Bureau of Economic Research.