Riders on the Storm

A country’s interest rate often reflects more than just the policy stance of its central bank. Movements in the global neutral rate of interest and the domestic neutral rate also play a significant role. Estimates from international models for Japan, Germany, the United Kingdom, and the United States show that central bank policy explains less than half of the variation in interest rates. The rest of the time, the central bank is catching up to trends dictated by productivity growth, demographics, and other factors outside of its control.

Economies around the world do not operate in isolation. A central bank’s decision on interest rates has immediate repercussions on international financial markets. And in the medium- to long-run, population trends, technological progress, and geopolitical forces—to name a few—constrain a central bank’s ability to set monetary policy further. Like riders on the storm, central banks must navigate global as well as domestic trends in setting interest rates to meet their inflation and full employment mandates.

Against this backdrop, policymakers have grown increasingly worried that global economic policy is becoming more divergent. Tensions have mounted as central banks continue along different interest rate paths following prolonged periods at or near zero interest rates. These tensions have been aggravated by the slow recovery many economies experienced following the global financial crisis. Policymakers fear the negative spillovers and stresses that this state of affairs might place upon the international financial system.

In this Letter we address basic questions about the workings of monetary policy, drawing evidence from the recent history of four advanced economies: Japan, Germany, the United Kingdom, and the United States. We ask, what are the drivers of monetary policy and how should we measure them? Are they mostly domestic or international? And what are the implications of this mix of forces for monetary policy? In other words, how truly independent of each other are different central banks? Our analysis indicates that interest rate fluctuations are determined by global factors outside a central bank’s control as much as by the domestic stance of monetary policy.

The determinants of interest rates

To start our international comparison of the stance of monetary policy across central banks, we need to explain what we mean by “tight” or “loose” monetary policy. This requires determining the benchmark equilibrium interest rate against which a policy rate is compared. The benchmark interest rate is the neutral rate of interest, which, as the name evokes, can be generally thought of as the equilibrium rate of interest under which prices remain stable. Unfortunately, the neutral rate, sometimes called r-star, is not directly observable and has to be inferred using statistical methods. We implement such methods by removing the effects of inflation, which allows us to work only with real rates of interest.

There are basically two different approaches to do this. One is to construct a statistical model that explains the evolution of an economy’s business cycle measured by its output relative to its potential, known as the output gap; the dynamics of inflation and expectations of its future values; and movements in the interest rate relative to its neutral level. This is what we do in Jordà and Taylor (2019), building on the seminal work by Laubach and Williams (2003). Alternatively, one could extract the neutral rate from financial markets data, as in Bauer and Rudebusch (2017) and Christensen and Rudebusch (forthcoming).

The former approach is more attractive for our purposes. It provides a benchmark model of the economy as a whole for each of the four countries that we investigate. This is useful when checking that all the implied economic relationships are internally consistent and make sense internationally. Differences in domestic neutral rate values for different economies have implications for their exchange rates in the medium run (Clarida 2019 and Obstfeld 2019). In the short run, divergence in the stance of monetary policy among different economies can create stress in a highly integrated financial system where capital is allowed to flow freely, as is the case in the countries we are examining.

It is also helpful to consider what could happen in the long run, that is, when frictions essentially dissipate. This is a good characterization of our four economies in practical terms, since exchange rates float freely and capital moves across their borders largely unimpeded. Investors would be able to trade freely across borders and thus take advantage of any differences in interest rates such that a unique, “global” neutral rate of interest would rapidly emerge. Estimates of country-specific neutral rates from our model allow us to construct the underlying value of this global neutral rate.

Thus, a country’s rate of interest can be thought of as being determined by the sum of three components. The first component is the long-run global neutral rate of interest, which is determined by global demographic factors, international productivity growth, increasing financial integration among economies, and several other economic and geopolitical factors.

The third component is the short-run measure of the stance of monetary policy, which is the difference between the current policy rate and the domestic neutral rate. Importantly, the central bank can influence only the last of these three components.

Interest rates in the United States can be characterized by these three components. Figure 1 shows estimates for the global and U.S. neutral rates and the range of neutral interest rates across the four countries in the sample in any given year.

Figure 1
Estimates of the neutral rate of interest: Global versus U.S. 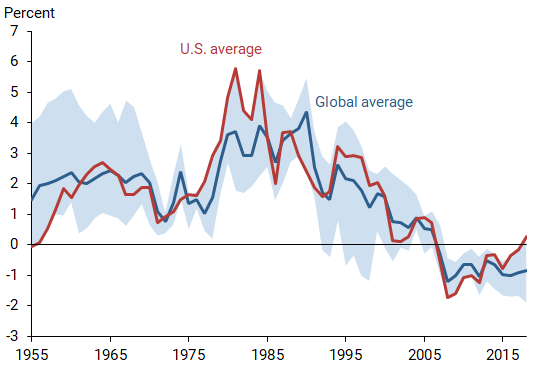 The familiar pattern in the figure shows that the neutral rate in the United States (red line) was relatively constant around 2% starting in the 1960s. It then climbed for a while during the high inflation era before drifting back down. Since the mid-1980s, however, the U.S. neutral rate has steadily declined, a trend that was aggravated by the Great Recession. The blue shaded region in the figure shows that the dispersion in domestic neutral rates around the global rate (blue line) narrowed considerably during the Great Recession relative to earlier decades. The dispersion appears to widen in recent times, but it is still relatively contained in comparison to earlier epochs. The figure also shows that the U.S. neutral rate closely tracks the global neutral rate.

Similarly, we can plot the stance of monetary policy as the difference between the real rate and the neutral rate for a given country. Figure 2 displays this information for all four countries in the sample by showing the range of stances (blue shaded area) along with the average across the four (blue line). Two features stand out. First the degree of synchronicity in the stance of monetary policy across the four countries is quite high. This is not too surprising because the business cycles in these countries also show a high degree of synchronicity, as shown in Figure 3. Second, the degree of divergence in recent times is toward the low end of what is historically the case. Neither Figure 1 nor Figure 2 depict a notable increase in monetary policy divergence yet. 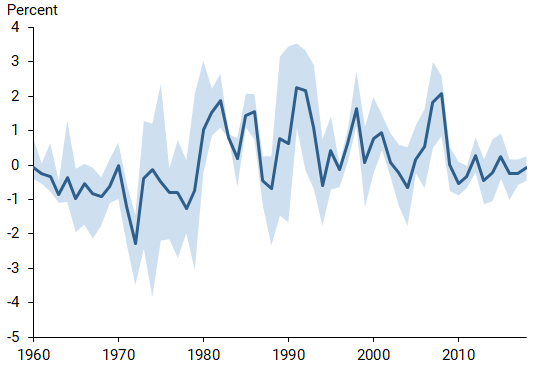 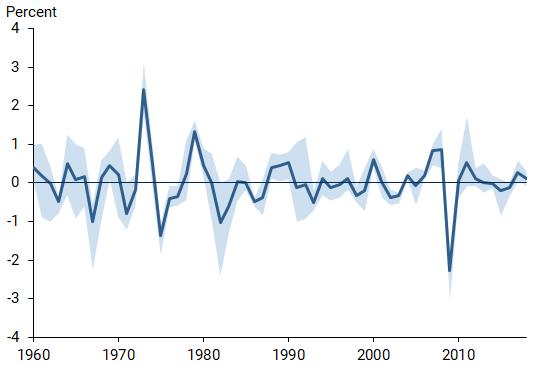 What explains the variation in interest rates? 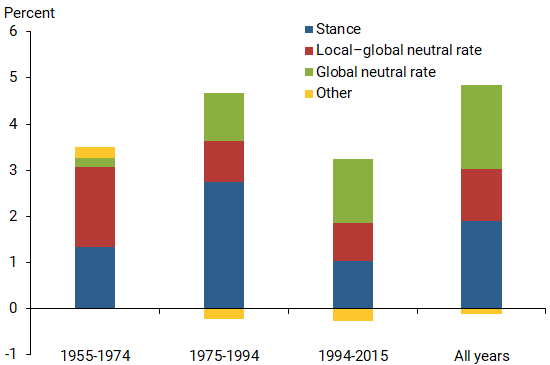 Figure 4 contains a wealth of information. First, interest rates vary differently across three subsamples, 1955–1974, 1975–1994, and 1994–2015, and for all years. Whereas most of the movements in interest rates are the result of monetary policy during the high inflation period of 1975–1994, at other times the movements are dominated by underlying trends in the global and domestic neutral rate of interest. More recently, global factors have become much more salient than at any time before. And taken altogether, the average monetary policy stance explains only about half of the variation in interest rates. The other half of the time, interest rates move for reasons other than a central bank’s response to the economic outlook.

People generally attribute a great deal of discretion to a central bank’s ability to set interest rates. This might be an overstatement. Our analysis suggests that most of the variation in interest rates can be explained by conditions beyond the central bank’s control: the aging of the population, declining rates of productivity growth, and other slow-moving factors known to affect the neutral rate of interest globally and domestically. From this perspective, fears that policy stances are increasingly diverging across advanced economies and that this divergence may have adverse consequences for the international financial system may be overblown.

Alan M. Taylor is a professor of economics and finance at the University of California, Davis, and a visiting scholar with the Federal Reserve Bank of San Francisco.