How Severe Is China’s Slowdown? Evidence from China CAT

China’s official GDP shows that its pace of economic growth has slowed gradually since 2010 but remains remarkably high, around 6%. A new index, the China Cyclical Activity Tracker, or China CAT, provides an alternative way to measure fluctuations in Chinese economic activity using a weighted average of several non-GDP indicators. The index suggests that economic activity has slowed noticeably since 2017 to a pace slightly below trend. GDP growth statistics appear excessively smooth over recent years, but, as of mid-2019, are in line with the China CAT.

In the second quarter of 2019, China’s GDP grew 6.2% from a year earlier. This was the slowest year-over-year pace since the early 1990s, but it is hardly indicative of a collapse. That said, observers have long worried that China’s official GDP reports may be unreliable.

In this Letter we introduce a new way to assess China’s economic growth based on recent research in Fernald, Hsu, and Spiegel (2019). Our China Cyclical Activity Tracker—China CAT for short—uses a combination of eight non-GDP indicators to measure deviations in year-over-year growth from the underlying trend. The index suggests that the Chinese economy has slowed over the past two years from above trend to slightly below trend. Still, there is no evidence of a collapse in growth. Relative to our index, China’s official GDP statistics appear excessively smooth, particularly over the post-financial crisis period. However, as of mid-2019, the reported growth rates appear consistent with the China CAT.

Figure 1 shows year-over-year growth in China’s GDP (blue line) along with an estimated trend line (green line) using a statistical filter described in Fernald, Hsu, and Spiegel (2019). Both actual and trend growth were much higher in the pre-2010 period. The latest available data show that growth in the second quarter of 2019 was well below the full-sample average of 9.1% but was close to the estimated trend. Since 2013, however, China’s growth has shown remarkably little volatility around its gradually slowing path. 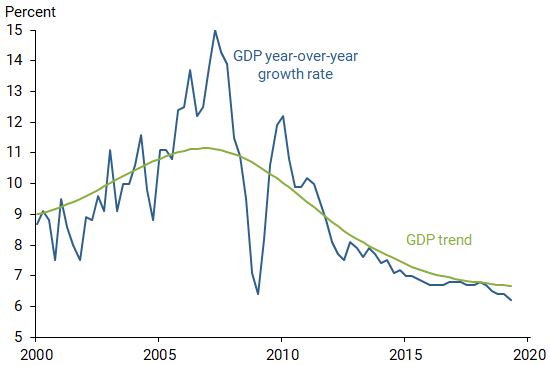 Several studies have suggested that the picture in Figure 1 may not give an accurate assessment of China’s economic growth. For example, Nakamura, Steinsson, and Liu (2016) find that official aggregate consumption data are smoother than expected levels based on standard theory. Pinovsky and Sala-i-Martin (2016) find that China’s reported GDP growth rate appears exceptionally high relative to its growth in light emissions, as measured from satellite images. Chen et al. (2019) use both value-added tax data and local indicators that are less able to be manipulated and estimate that GDP growth from 2010 to 2016 was 1.8 percentage points lower than reported.

However, an earlier comparison of reported output to a broad set of alternative indicators ending in 2012 (Fernald, Malkin, and Spiegel 2013) showed little evidence of any systematic deterioration in the accuracy of China’s reported GDP.

In Fernald et al. (2019), we address the measurement problem using indexes of economic activity created as weighted averages of updated data on a broad range of measures of economic activity in China. We create the index using a statistical technique known as principal components to capture as much variability as possible in the individual series. Conceptually, this index is similar to the Chicago Fed National Activity Index (Brave 2008).

Given our broad set of activity indicators, our methodology yields over 16,000 possible Chinese activity indexes. The next question is how to assess which combination of indicators of activity is superior. Individual indicators such as electricity use or fixed asset investment are produced within China, so they could all be subject to manipulation or statistical error.

In Fernald et al. (2019), we propose that measuring China’s real imports using trading-partner exports can provide external validation. Trading-partner exports are measured outside of China, so this measure of imports is free of possible statistical error or manipulation by Chinese authorities. Of course, imports represent only one part of the economy, focused on goods. Nevertheless, we find that, for countries with good statistical systems, imports and GDP move together closely. Note that our analysis of the link between imports and economic activity relies on data prior to recent trade tensions, since those tensions could distort the relationship.

We begin with the broadest possible set of non-GDP indicators. But more is not necessarily better. For example, one could include indicators that are biased or that are mainly noise. We find that our smaller set of eight gives the most reliable signal regarding cyclical activity as indicated by movements in trading partner exports to China. Alternative combinations of indicators performed much the same, suggesting that our results are not particularly sensitive to our selection methodology.

The China CAT represents deviations in year-over-year growth from trend for several reasons. First, to control for seasonal factors, we measure all variables in four-quarter growth rates. Second, we remove low-frequency trends from all growth-rate data before taking principal components. Intuitively, because the data series have different trends, the index would otherwise be a mix of those trends and cyclical effects. Third, we normalize the detrended data and the resulting China CAT index to have a standard deviation, that is, a statistical measure of dispersion in the data, of unity to account for some series being more volatile than others. This normalization equalizes the signals from a given magnitude shock across all of our indicators.

Figure 2 shows China’s import growth, reported GDP growth, and the China CAT. For statistical reasons, we measure import growth using inflation-adjusted trading-partner exports to either China or Hong Kong, excluding trade between the two. The GDP line corresponds to the difference between GDP growth and its trend line shown in Figure 1. To ensure that the typical variability in the series is similar to the China CAT, we then rescale the data to also have a unit standard deviation. 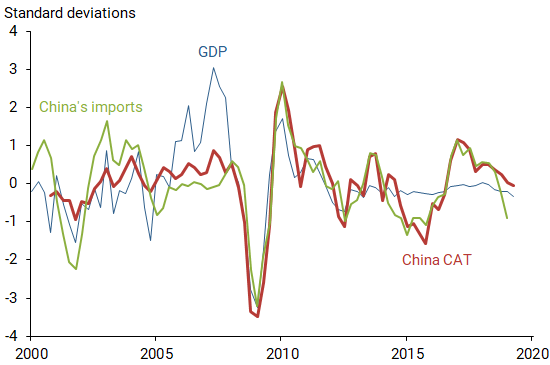 Before 2008, GDP shows little comovement with imports. The relationship changes markedly from 2008 through 2013, when GDP and imports move together quite closely. But since 2013, the comovement disappears. Import growth varies about as much as it did before the crisis. But GDP growth appears excessively smooth, with hardly any volatility.

In contrast, China’s imports and the China CAT move closely together throughout the sample. The China CAT, like imports, has been about as volatile in the period since 2013 as it was before the 2008 global financial crisis. Also like imports, the China CAT showed notably slower cyclical growth in 2015—when China was suffering substantial capital outflows and growth was a concern. Imports and the China CAT turned substantially positive by early 2017, following a loosening in credit and debt. Around that time, Chinese authorities began to restrict credit expansion and growth slowed. More recently, trade tensions and slowing global growth have also weighed on economic activity.

Recently, the financial press has shown renewed concerns that China’s GDP might be overestimating growth—and underestimating the slowdown. Reported GDP growth has been slowing relatively smoothly in recent years. Hence, the data are not far from zero, as shown in Figure 2. The China CAT has slowed more noticeably over the past eight quarters by 1¼ standard deviation to a reading of –0.2. Still, the slowdown was from an above-trend pace, so both GDP and the China CAT now indicate that growth is just a little below trend.

Thus, our analysis suggests that, while China’s cyclical activity has slowed more sharply over the past two years than GDP numbers suggest, there is no evidence of a collapse in growth to a rate markedly below trend. Our results also suggest that the GDP numbers appear accurate as of the second quarter of 2019.

A caveat about trends

Figure 2 reports each series relative to its own trend. Although our best estimate is that GDP is currently giving an accurate cyclical signal, this would be little comfort if the decline in trend turned out to be even sharper than suggested by the published GDP data.

Our methodology requires detrending at the outset. However, we can compare the movement in the GDP trend to those of our underlying indicators. As Figure 1 shows, trend GDP growth has slowed smoothly and gradually since its post-crisis peak in 2010. The recent value for that estimated trend is 1.1 standard deviations below the full-sample average of 9.1%.

Examining our individual non-GDP indicators does not suggest a sharper slowdown in trend than captured in China’s official GDP numbers. As of the second quarter of 2019, the median estimated trend for our eight individual indicators was –0.7 standard deviation. Some indicators showed an estimated trend decline larger than GDP, including fixed asset investment with –1.3 standard deviation and industrial production with –1.2 standard deviation. Others showed a smaller decline, including rail freight with 0, new floor space constructed with –0.3, and electricity use with –0.6.

Moreover, the decline in the GDP trend in Figure 1 is actually flattening at the end of our sample, suggesting that the slowdown in trend might be easing somewhat. This is not surprising since China was unlikely to be able to sustain its earlier double-digit growth pace. It seems more likely that it might settle down for a time at a rate only modestly lower than its current pace.

In this Letter, we introduce a new China CAT index of Chinese economic activity based on the first principal components of eight alternative activity indicators. Comparing alternative measures suggests that our index provides a more accurate assessment of economic activity in China than reported GDP does. Indeed, in recent years, GDP growth appears spuriously smooth.

Our index suggests that China’s cyclical activity has slowed over the past two years from an above-trend pace to a slightly below-trend pace. Still, there is no evidence of a collapse in growth to a rate markedly below trend—nor do the individual activity indicators suggest a sharper slowdown in trend than the gradual one captured in the published GDP numbers.

Because we validate our data relative to imports, our estimates might underweight services and other nontradable sectors. Still, our preferred activity factor includes both relatively narrow indicators, such as rail freight, and broader ones, such as retail sales. Moreover, even if the China CAT index is imperfect, our results suggest it may be a better indicator of cyclical fluctuations in China’s economic activity than GDP alone.

Neil Gerstein is a former research associate in the Economic Research Department of the Federal Reserve Bank of San Francisco.