Amid significant uncertainty about the pandemic’s trajectory and its impact on the world and U.S. economies, evidence suggests that economic activity began slowing substantially at the end of the first quarter. In addition to people sick from COVID-19, others face shelter-in-place and mandatory social distancing policies that inevitably disrupt business activity. Those circumstances induce households and businesses to spend less, especially on nonessential goods and services. How do these disruptions propagate through the economy and affect inflation and unemployment, and how much can conventional monetary policy offset those effects?

In this Economic Letter, I use an empirical model of the U.S. economy to quantitatively illustrate the impact of a shock with drops in productivity and demand that are twice as large as typical fluctuations over the past 30 years. Results show that an aggressive federal funds rate cut in response to the projected impact of the pandemic can substantially mitigate the increase in unemployment. Unemployment increases more than proportionally to the severity of the drops in productivity and demand because the effective lower bound of the federal funds rate limits how much monetary policy can stabilize the economy.

Modeling the economic impact of COVID-19

It is too early to confidently estimate the economic impact of the current pandemic. Instead, I modify the empirical model described in Cúrdia et al. (2015) to estimate the underlying conditions in the U.S. economy and then simulate scenarios in which economic activity suffers a downturn starting in the first quarter of 2020.

In this model, I measure economic slack as the unemployment gap, the difference between current unemployment and the level that would prevail if all prices adjusted freely in response to economic shocks to allow resources to be used fully and efficiently. In the model, the unemployment gap increases with the interest rate. Slack also depends on other factors, such as government spending, willingness of households and businesses to spend, financial conditions, and labor productivity. Inflationary pressures fall with economic slack but rise with expected future inflation and other factors related to production costs. The model does not explicitly account for asset purchases such as those announced by the Fed on March 15. However, expectations about the future path of the federal funds rate do matter, including any Fed announcements, known as forward guidance, as well as expectations about being at the zero lower bound.

With this framework, I can quantify the expected shifts in U.S. economic conditions since the 2008 financial crisis. I can then use the model’s structure to capture and identify the unexpected changes, or “shocks,” through the difference between the expected and actual outcomes at each point in time. I use the underlying model to estimate economic conditions immediately preceding the COVID-19 pandemic.

The estimation and simulations are based on data from 1987 through the end of 2019 for core personal consumption expenditures (PCE) price inflation, real GDP growth, unemployment, effective funds rate, and long-run unemployment from the Congressional Budget Office and the Fed’s Summary of Economic Projections. I also account for public perceptions of forward guidance by including federal funds rate expectations implied from financial market data, using the methods in Christensen and Rudebusch (2012).

To simulate the effects of the pandemic I consider scenarios with two simultaneous negative effects in the economy. First, labor productivity falls, which means businesses produce fewer goods and services for each hour of labor. This loss in efficiency reflects such things as less effective work-from-home arrangements, technology hiccups from overtaxed telecommuting tools, and home childcare responsibilities. Second, the public’s willingness to spend also falls due to policies that mandate avoiding nonessential travel and closing nonessential businesses, which lowers overall demand for goods and services in the economy.

I assume that low productivity and weak demand start in the first quarter of 2020 and worsen in the second quarter. Afterwards these effects taper off such that they subside to half their peak strength in three quarters, by the end of the first quarter of 2021. I then assume that the Federal Reserve chooses the federal funds rate level to keep inflation and unemployment as close as possible to their objectives without relying on promises of future actions.

It is extremely difficult to determine the size of the productivity and demand decreases. In my baseline scenario, I assume that they are twice the size of the average fluctuations over the past 30 years. Such large simultaneous drops are extremely unlikely in normal times, but the pandemic’s effect is already well beyond normal relative to the past 30 years. This scenario thus provides a way to evaluate the offsetting effects of alternative policy responses.

The macroeconomic outcomes from any scenario are dependent on monetary policy actions. I consider two cases. In the first, aggressive policy response, I assume that the Federal Reserve sets the federal funds rate to keep inflation and unemployment as close as possible to their objectives. As a result, the federal funds rate immediately falls to the 0 to ¼% range, as announced by the Fed in March. This sudden drop before the worst of the crisis is in anticipation of a weakened policy space caused by the effective lower bound on the nominal federal funds rate. This is the idea that lowering the nominal interest rate beyond a certain level is no longer effective at stimulating the economy. Several countries in Europe have used policy rates below zero, but in the United States the effective lower bound is considered to be around zero. Thus, even if economic conditions warrant further stimulus, interest rate cuts are no longer an option once we reach the lower bound. The anticipation that this will happen in the near future further worsens present conditions and leads policymakers to act now rather than wait.

The key reason to act faster than normal is that households and businesses adjust to expected economic conditions, not just current ones. This has two implications. First, expecting future low productivity and demand leads households and businesses to cut spending right away, making current conditions worse ahead of time. Second, expecting monetary policy to be constrained in the near future implies an expectation that conditions will deteriorate further, which pushes current conditions down even more. Accounting for these effects requires the federal funds rate to fall, even if inflation and unemployment are close to their objectives.

To highlight the implications of ignoring these effects, I consider a second case, slow policy response, which assumes that the federal funds rate is set according to an empirical rule that responds to contemporaneous deviations of inflation and unemployment from their objectives. This policy response fails to account for how severe the situation is projected to be and does not use the full policy space as quickly as possible.

Figure 1 shows the simulated paths of unemployment and four-quarter core PCE price inflation in response to the baseline scenario for the two policy alternatives. With the aggressive policy (blue lines), unemployment reaches 6.8% in the last quarter of 2020, and inflation falls to as low as 1%. If policy is slower to adjust (green lines), then unemployment reaches 10.4% in the first quarter of 2021 and inflation falls as low as –1.4%, which are much worse outcomes. This shows that the failure to anticipate dire conditions can be compounded by limited policy space to yield substantially worse outcomes.

Figure 1
Estimates of unemployment and inflation under alternative policy responses 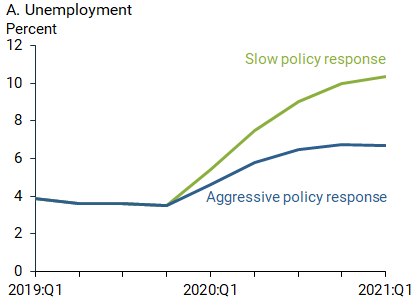 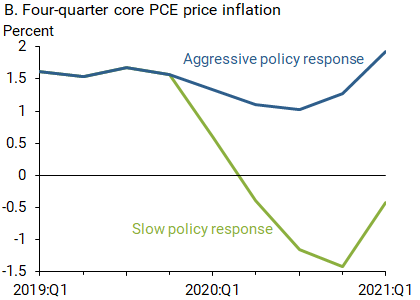 Limited policy space and the severity of the economic impact

Given the potential for ongoing strict requirements for sheltering at home and closing nonessential businesses, the impact of the pandemic could be even stronger or more prolonged than in my baseline scenario.

Figure 2 shows the economic outcomes for two alternative scenarios relative to the baseline (blue lines). One alternative is a severe contraction (red lines), in which productivity and demand fall by three times the normal fluctuations over the past 30 years. The initial drop in productivity and demand is only 50% more substantial than in the baseline scenario, but the lack of policy space due to the effective lower bound implies that the increases in unemployment and decreases in inflation are more than proportional to the severity of the scenario. In this case, unemployment reaches 9.6%, even with an aggressive policy response, and inflation falls as low as 0.4%.

Figure 2
Estimates of unemployment and inflation under alternative model scenarios 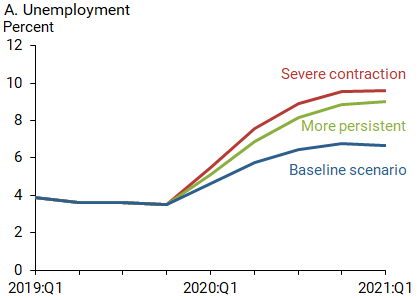 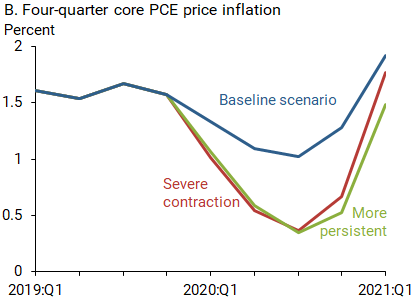 Figure 2 also shows a more persistent alternative (green lines) using the same peak effect as the baseline scenario, but with productivity and demand taking one quarter longer to regain half of their lost strength. Even if the initial impact is as severe as the baseline and policy is aggressive, the fact that conditions remain weak longer implies that conventional policy will be constrained longer, leading to outcomes nearly as dire as in the severe contraction scenario.

Model estimates are only as good as the accuracy of the model in representing the economy and of the underlying assumptions about the size and persistence of the initial economic shock. This simple model is not guaranteed to accurately mimic outcomes in the complex U.S. economy, much less in the case of an unprecedented pandemic. Thus, these results should be viewed as a quantitative illustration of how much outcomes can depend on monetary policy and the timing and severity of the pandemic-related economic effects.

Furthermore, this analysis ignores the effects of other economic stimulus. For example, the Federal Reserve has announced asset purchases of long-term Treasuries, mortgage-backed securities, and commercial paper, as well as other programs to improve financial intermediation. All of these are likely to help stimulate the economy and prevent worse outcomes. How effective they are in boosting the economy is more uncertain compared to the conventional federal funds rate cuts, as discussed in Chen, Cúrdia, and Ferrero (2012). Nevertheless, my findings that macroeconomic outcomes deteriorate more than proportionally to the severity of the scenario due to the limited conventional policy space highlight the potential role for additional monetary policy tools. Fiscal policy and international coordination are likely to stimulate the economy further, but accounting for those actions is beyond the scope of this analysis.

This Letter quantitatively evaluates the role that the Federal Reserve’s policy rate can have in mitigating the economic impact of the COVID-19 pandemic. While it is difficult to capture all the complexities of the economy in a model, this analysis suggests that the proximity of the federal funds rate to its effective lower bound before the pandemic reinforces rather than offsets the need for a rapid funds rate decline. My analysis also shows that economic outcomes deteriorate more than proportionally to the severity of the scenario because of limited policy space due to the effective lower bound of the federal funds rate.