In response to the COVID-19 pandemic, the Federal Reserve cut the federal funds rate to essentially zero. It took further measures to support the functioning of financial markets and the flow of credit. Nevertheless, the economic downturn is putting downward pressure on inflation, which had already been running below the Fed’s 2% target for several years. This raises additional concerns that inflation expectations could decline and push inflation down further, ultimately hampering economic activity. A monetary policy framework based on average-inflation targeting could help address these challenges.

The economic environment in the United States has changed substantially over the past four decades. Inflation has fallen from its highs in the early 1980s and has recently been running below the Federal Reserve’s target rate of 2%. The typical level of interest rates has fallen to a point where the Federal Reserve has limited space to lower the policy rate further to help during economic downturns. In response to the current coronavirus pandemic, the Federal Open Market Committee (FOMC) did not have much leeway to cut the federal funds rate before essentially hitting zero, the so-called effective lower bound.

The problem with below-target inflation

The Federal Reserve has long fostered stable economic growth by pursuing the dual mandate of maximum employment and price stability. For the second leg of this dual mandate, the Federal Reserve sets a target rate of 2% for inflation to keep price increases modest while guarding again deflation. One measure policymakers commonly use for inflation is the year-over-year percentage change in the price index for personal consumption expenditures (PCE).

Despite the longest economic expansion on record, PCE inflation stayed below the FOMC’s target for most of the past decade, as shown in Figure 1. The figure also shows inflation compensation as measured by the five-year breakeven inflation rate, which is the difference between nominal and Treasury Inflation-Protected Security (TIPS) yields. Breakeven inflation thus captures the compensation for expected inflation in financial markets and embedded inflation risk premiums in TIPS yields (Christensen, Gamble, and Zhu 2020). Both inflation and inflation compensation have persistently stayed below the 2% target over the past 10 years. This evidence is consistent with alternative survey-based measures of inflation expectations, as discussed in Amano, Carter, and Leduc (2020). 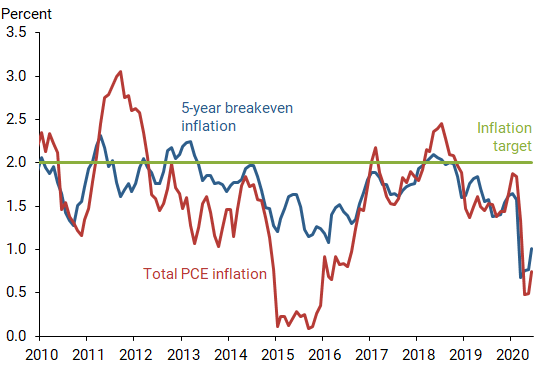 One potential driver of these developments over past decades has been the decline in the natural real rate of interest, the rate consistent with maximum employment and price stability, which has contributed to lower nominal interest rates. Because nominal rates cannot go below the effective lower bound, essentially zero, policymakers have less room to cut interest rates to mitigate recessions (see Williams 2016). In this environment, policymakers are also more likely to be constrained by the lower bound in the future. Despite the availability of additional policy tools, such as forward guidance and quantitative easing, the effective lower bound may restrict how much policymakers can offset future negative shocks, leading to larger declines in inflation and economic activity.

Persistent risk of interest rates falling to the lower bound can erode inflation expectations. If households, businesses, and investors anticipate such conditions happening more frequently, they may expect future inflation to be lower than the official target (see Mertens and Williams 2018). Lower inflation expectations, in turn, put further downward pressure on inflation and restrict economic activity.

Inflation targeting, a common practice in central banking today, aims to move the expected rate of inflation towards its target, regardless of its past levels. It is therefore forward looking and lets “bygones be bygones,” since policy does not respond to past deviations of inflation from target. For instance, consider a situation in which policymakers are unable to offset the impact of a negative shock because of the effective lower bound, and inflation falls below target as a result. Once economic conditions normalize, policymakers under an inflation-targeting framework look ahead and do not attempt to make up for the past inflation shortfall. 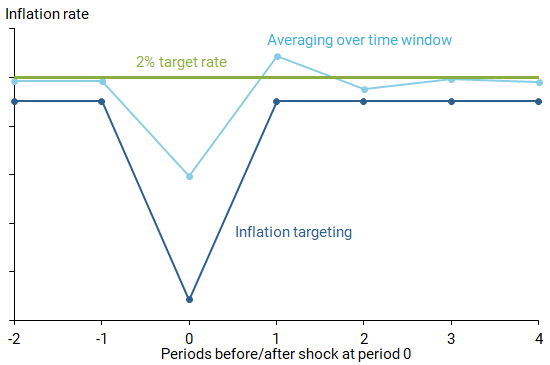 By contrast, average-inflation targeting frameworks can alleviate downward pressures on inflation and output and thus anchor inflation expectations closer to, or even at, the target (see Mertens and Williams 2019). To make up for undershooting during lower-bound episodes, these frameworks overshoot the target at other times.

An important aspect of these frameworks is their reliance on the promise to keep interest rates lower than in standard inflation targeting; this is designed to push inflation above target following periods when policymakers are constrained by the effective lower bound. The underlying mechanism is thus similar to forward guidance but can be applied more systematically because inflation overshooting is codified in the framework. As a result, future inflation promises might be viewed as more credible.

Averaging over a fixed time window

One example of a policy framework that embeds such inflation overshooting focuses on averaging over a fixed time window. This approach aims to steer a moving average of current and past inflation rates toward the target rate over a specific time frame. It is thus similar to standard inflation targeting, but accounts for past inflation rates to evaluate progress toward the target over a specific window. As such, it does not let bygones be bygones but rather makes up for past misses of the inflation target.

The light blue line in Figure 2 shows that inflation overshoots the target following the negative shock to make up for lower inflation in the past. To bring the average inflation rate back to target, the central bank sets interest rates lower following the shock than it would under standard inflation targeting. As a result, the more expansionary monetary policy mitigates the initial decline in inflation and boosts it thereafter. Importantly, in its simplest form, policymakers under this framework make up for both negative and positive inflation deviations from target. Therefore, policymakers would also need to be ready to raise interest rates and conduct a more restrictive monetary policy than they would under standard inflation targeting to make up for periods with above-target inflation.

When the policy is credible, Amano, Gnocchi, and Leduc (2020) find average-inflation targeting to be an effective monetary policy framework in models with liquidity-constrained households in which inflation expectations are partly backward looking. They also calculate that the optimal averaging period is relatively short, about two years or less, in standard macroeconomic models when policymakers can be constrained by the effective lower bound (see also Budianto, Nakata, and Schmidt 2020).

Averaging over the business cycle

Figure 3
Targeting inflation when averaging over the business cycle 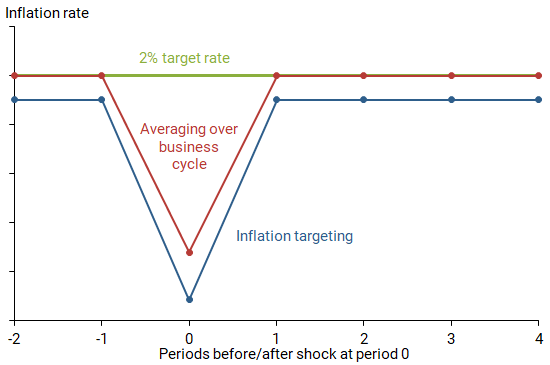 The main difference between each of these average-inflation targeting frameworks and standard inflation targeting is that the central bank sets how much overshooting it wants to achieve whenever the policy rate is not constrained by the lower bound, for instance, in expansions. Compared to standard inflation targeting, the only additional communication this policy requires is the amount of overshooting. Since the central bank achieves the 2% target rate on average, households and businesses can use this rate of inflation as a basis for long-term planning and their inflation expectations will be firmly anchored.

Despite its conceptual simplicity, it may be challenging to determine how much inflation overshooting is required to achieve the targeted rate on average, and the degree of overshooting may need adjustments over time. However, frequent adaptations may make the policy less credible. In that case, the effect on inflation expectations might be dampened if households and businesses doubt the future course of policy. This policy framework may be less effective as a result.

Renuka Diwan is a research associate in the Economic Research Department of the Federal Reserve Bank of San Francisco.

Sylvain Leduc is executive vice president and director of the Economic Research Department of the Federal Reserve Bank of San Francisco.