The pandemic caused by the coronavirus is depressing economic activity and severely straining government budgets globally. Without international support, the ability of emerging economies to weather this crisis will depend crucially on access to and the cost of borrowing in domestic government bond markets. Analyzing bond flows and risk premiums for Mexican government bonds during the pandemic gives some insights into a major emerging economy’s experience. Mexican risk premiums have increased more than 1 percentage point above predicted levels, pointing to tighter funding conditions for the Mexican government.

A recent study suggested that developing countries could see a cascade of sovereign defaults as they grapple with the health-care cost and economic fallout from the coronavirus disease 2019 (COVID-19) pandemic (Gourinchas and Hsieh 2020). These concerns are fueled by advanced economies’ unprecedented plans to increase government borrowing, part of which is likely to be funded with money coming from emerging market economies. As a consequence, capital could flow out of developing economies both as foreigners pull out money to fund needs at home and as domestic investors seek safe assets in advanced economies. Hence, it is important for public policy to assess how well emerging economies will be able to raise the funds needed for their own COVID-19 response through domestic government bond markets. Those that cannot may face a funding squeeze or “sudden stop,” which historically has proven to be very costly for economies (Rothenberg and Warnock 2011).

In this Letter, we analyze the risks to government bond financing in Mexico, which is a leading emerging economy that typically makes up 10–13% of emerging market bond indexes. We follow Christensen, Fischer, and Shultz (2019) and study the connections between the share of Mexican government bonds held by foreigners and the liquidity premiums investors demand to hold those bonds. While we find only a modest decline in the foreign share since the end of 2019, our results show that Mexican bond liquidity premiums have spiked beyond what historical analysis predicts. Analyzing term premiums in Mexican bond prices reveals similar increases in borrowing costs beyond those predicted by historical relationships. Given that the timing of these spikes coincided with the spread of the coronavirus, we interpret our results to imply that the domestic funding costs of the Mexican government have increased slightly more than 1 percentage point for reasons related to COVID-19.

Our study focuses on Mexico because of the historical correlation between its funding costs and credit risk and those in other emerging market economies. Furthermore, with its history of financial crises, Mexico would seem particularly exposed to the concerns raised by Gourinchas and Hsieh (2020). However, Mexico’s reliance on oil for government funding and its connections and border with the United States make it special among emerging market economies. It is unclear whether the historical relationship between capital flows to Mexico and those to other emerging economies will continue during the pandemic; therefore, the conclusions from this analysis may not apply to other emerging markets.

To assess the flow of funds in the Mexican government bond market, we use Bank of Mexico data on foreign and domestic holdings of Mexican sovereign debt securities. These data cover any changes in its sovereign debt holdings by either domestic or foreign investors. For each transaction, the data also identify the type of Mexican government security. This allows us to concentrate specifically on holdings of standard Mexican fixed-coupon government bonds denominated in Mexican pesos, known as bonos.

Figure 1 shows the end-of-month level of bonos holdings by domestic residents and foreigners from January 2007 through April 2020. Since 2012, foreigners have held a larger share of Mexican bonos than domestic residents. However, foreign holdings have declined since February 2020, which may be the beginning of a more widespread pullback by foreigners from this market. This raises the question: have these fund flow changes and the general financial market turmoil caused by the coronavirus pandemic raised the funding costs of the Mexican government, and if so by how much? 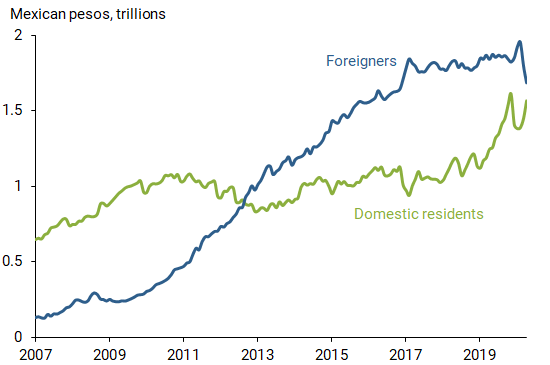 A liquidity-adjusted model of bond yields

To address this question, we analyze the price discount that bonos investors demand for assuming liquidity risk, which is the risk that they may be forced to rapidly sell bonds before maturity at significantly depressed prices.

To estimate these liquidity premiums embedded in bond prices, we use a standard yield curve model from Christensen, Diebold, and Rudebusch (2011), augmented with a liquidity risk factor as described in Andreasen, Christensen, and Riddell (2020). The liquidity risk factor is identified from its unique loading for each individual bond. This loading assumes that, over time, an increasing proportion of any bond’s outstanding notional amount will be locked up in buy-and-hold investors’ portfolios and unavailable for trading. Given forward-looking investor behavior, this lock-up effect implies that a particular bond’s sensitivity to the marketwide liquidity factor will vary depending on how long it has been since the bond was issued. By observing prices from a cross section of Mexican bonds with different times to maturity and age characteristics, we can identify the liquidity factor.

The remaining factors in the model represent general patterns in the level and shape of the yield curve that would prevail in a world without any frictions to financial market trading. The estimated dynamics within the model also allow us to generate expectations of future short-term interest rates, which we deduct from the liquidity-adjusted bonos yields to produce estimates of standard term premiums embedded in the bond prices. 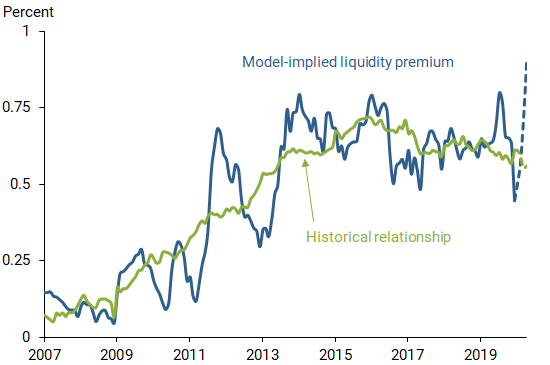 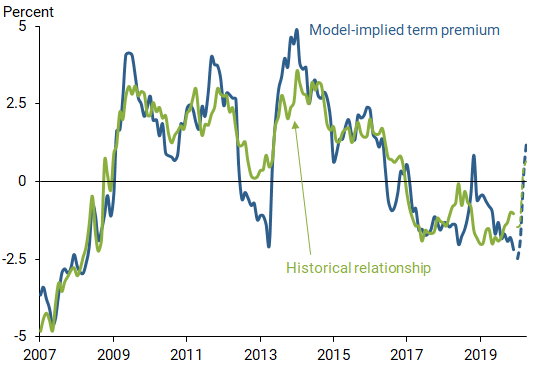 The figures also depict the historical relationships between each series and a set of variables that explain variation in bonos market liquidity or general bond risk premiums. These variables include the share of foreign holdings of bonos, the Mexican peso–U.S. dollar exchange rate, an index for emerging market sovereign bond yields, oil prices, the year-over-year change in the Mexican consumer price index, the Mexican public debt-to-GDP ratio, the average bid-ask spread in the bonos market, and the one-month cetes rate, a widely used proxy for Mexican short-term interest rates. The solid green lines in Figures 2 and 3 show what the historical relationship of these variables implies for the liquidity and term premiums in our pre-COVID sample.

To assess whether these premiums have behaved differently during the pandemic, we use our explanatory variables since January 2020 to derive the liquidity and term premiums that would have prevailed if the same historical relationships had continued. The dashed green lines in Figures 2 and 3 show what the historical relationships imply for this time period. Our model predicts a spike in the term premium but not in the liquidity premium.

In the final step, we reestimate the yield curve model through the end of April 2020. This produces the realized bonos liquidity and term premiums shown with dashed blue lines in Figures 2 and 3. While the regression model predicts an almost flat path, the bonos liquidity premium in Figure 2 actually spiked sharply higher in recent months, rising 0.34% above its predicted value by the end of April 2020. As a caveat, though, we note that the statistical model also revealed several previous spikes in the bonos liquidity premium to be short-lived idiosyncratic shocks. Whether the current spike will fall into that category or be the start of a new upward trend remains unclear.

The predicted value of the 10-year bonos term premium shown in Figure 3 has moved sharply higher in recent months. According to our model, this has been driven largely by the sharp depreciation of the Mexican peso against the U.S. dollar and a spike in the emerging market sovereign bond yield index in combination with declines in the one-month cetes rate. The spike is partially offset by the drop in oil prices, which generally lowers Mexican term premiums. We find that the realized values for the 10-year bonos term premium increased 0.73% above the predicted level as of the end of April 2020.

Still, the recent term premiums in our sample are far from their highest levels, which occurred during the global financial crisis in 2009 and the so-called taper tantrum in May 2013. Recent liquidity premiums, however, have spiked to a level higher than ever before in our sample. Taken together, the increases in these two premiums could be a cause for concern about the funding conditions for the Mexican government. However, earlier episodes of elevated bond risk premiums did not give rise to any sudden stops in capital flows to Mexico.

Putting the pieces together, although the foreign share of the Mexican government bond market has declined modestly, this shift does not appear to have been a major factor behind recent changes in the borrowing rates of the Mexican government. Rather, the general financial market turmoil caused by the pandemic, as reflected in our set of explanatory variables, has pushed up the expected level of Mexican bond term premiums by more than 2 percentage points. In addition, the bonos liquidity and term premiums have spiked more than a full percentage point above our model’s predicted levels in recent months. Given the timing of these spikes in March 2020, we interpret them as excess risk premiums caused by the COVID-19 pandemic. While this development could be a cause for concern about the funding conditions for the Mexican government, the term premiums remain well below past historical spikes.

The COVID-19 pandemic has raised concerns about the ability of emerging market governments to borrow in domestic government bond markets on reasonable terms. To assess the current bond market conditions in a major emerging economy, we focus on Mexico and examine both changes in foreign holdings of Mexican government bonds and the pandemic’s effect on their risk premiums.

Although the foreign-held share in this market has declined since the start of the year, our analysis suggests that this cannot fully explain the recent spike in Mexican government bond risk premiums. Instead, our results indicate that a combination of conventional factors and risks unique to the COVID-19 pandemic have pushed bond risk premiums more than 1 percentage point above what would otherwise have been expected, which may be indicative of some funding challenges for the Mexican government. Further analysis would be required to determine whether other emerging bond markets have faced similar effects since the onset of the pandemic.

Eric Fischer is a quantitative risk specialist in Financial Institution Supervision and Credit at the Federal Reserve Bank of San Francisco.

Patrick Shultz is a PhD student at the Wharton School of the University of Pennsylvania.