The Highs and Lows of Productivity Growth

Productivity growth shows evidence of switching between long periods of high and low average growth. Estimates suggest that the United States has been in the low-growth regime since 2004. Assuming this low growth continues, productivity growth in the year 2025 would be 0.6%. By dropping this assumption and allowing for a switch to consistent higher growth, an alternative estimate forecasts that the distribution of possible productivity growth across quarters could average about 1.1% in 2025.

Economic growth in the United States has been relatively low by historical standards since the mid-2000s. Low productivity growth has been a main culprit contributing to this lackluster growth (see, for example, Fernald and Li 2019). Productivity growth allows the economy to produce more output with the same level of inputs such as worker hours and capital. Understanding how productivity has evolved in the past can help indicate how future economic growth might evolve and whether the relatively sluggish growth of recent years is likely to continue.

We focus on total factor productivity (TFP) as described in Fernald (2014), which measures productivity in the U.S. business sector from 1947 to the end of 2019. Figure 1 shows that, relative to the beginning of the series, growth has been uneven both quarterly and over longer periods of time lasting years or decades. 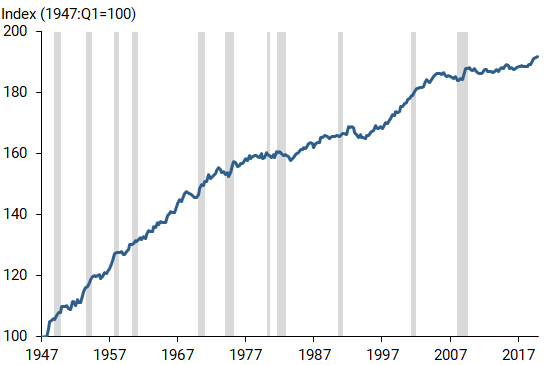 To study the tendency of productivity growth to move between periods of higher and lower growth, we estimate a statistical model known as a regime-switching model in Foerster and Matthes (2020). This model formalizes the idea that productivity moves between extended periods of higher and lower average growth, while still allowing for quarterly movements away from the overarching lower and higher averages. While we have data available to measure productivity growth, we do not know which regime is in place at any given time and must infer it based on historical data. The model estimates the probability of being in the high- or low-growth regime at a given point in time plus the average growth rates of the two regimes. To do so, the model breaks down the annualized quarterly growth rate into an average growth rate that depends upon being in a high- or low-growth regime, plus a temporary deviation from that average.

In addition, the model allows for switches between the two growth regimes. These switches capture the idea that, for example, the IT boom may boost productivity for an extended time, but at some point the boost will wear off and lower growth will resume. Similarly, a period of lower growth—such as the period since the mid-2000s—will not last forever, but there’s no way to know exactly when the next increase in productivity—for instance, from increased automation—will arrive.

The estimated regime-switching model indicates that productivity has distinct and long-lasting high- and low-growth regimes. High-growth periods average about 2.0% in annualized quarterly TFP growth, while slower periods average about 0.6%. These estimates are in line with the subsamples studied by Fernald (2016) and Fernald and Li (2019). The model shows few switches between regimes, which have an average duration of about 60 quarters, or 15 years. This reflects the few changes the U.S. economy has undergone in average productivity growth since 1947.

While we can observe productivity growth moving between high and low levels of growth, it can be hard to know which regime is in place at a given time. For example, if productivity growth is high in one quarter, is that because growth is in the high-growth regime and will therefore tend to be high for some time, or is it only a temporary blip during a low-growth regime? Our model can help distinguish more persistent periods of growth, such as the IT boom, from temporary boosts in an otherwise slow period. It does so by accounting for regime changes being relatively rare, such that only repeated strong growth numbers would indicate a change to a higher-growth regime.

Given the regime-switching nature of productivity growth, we use the model to forecast where growth might be in the future. In two scenarios, productivity could continue on the path towards higher growth. An optimistic view would suggest that recent advances in automation could create a boost in productivity growth similar to that seen during the IT boom of the 1990s. A more pessimistic view would suggest that the recovery from the COVID-19 pandemic could artificially boost productivity growth for an extended time as the economy repairs damages. In this view, the disruption may have destroyed factors that implicitly affect productivity, such as worker-firm relationships or the organization of supply chains, to such a degree that a period of high productivity growth will ensue as businesses and workers repair, rebuild, or redevelop those factors simply to get back to the previous level of economic activity.

Alternatively, the estimated regime-switching model produces a more comprehensive forecast that takes several sources of uncertainty into account. First, there is some uncertainty about the regime in place at the end of 2019, with about 75% probability of it being in the low-growth regime. Second, there is uncertainty about what regime will be in place in 2025. Although regimes tend to be long lasting, there is always a chance that the economy will switch. Third, beyond the average growth, there are temporary deviations in any given quarter that generate fluctuations.

Figure 3 shows the implied distribution of productivity growth in 2025 when we average the model’s quarterly annualized growth forecast for that year. The distribution shows that a wide range of growth is possible, due in large part to the variance of the temporary component of quarterly growth. However, some uncertainty reflects the fact that our prediction only slightly favors the low-growth regime continuing throughout 2025, with only around 60% probability. In fact, the average forecast across quarters for 2025 is for 1.1% growth, reflecting a 40% probability of a switch to a higher-growth regime of around 2% growth per year. 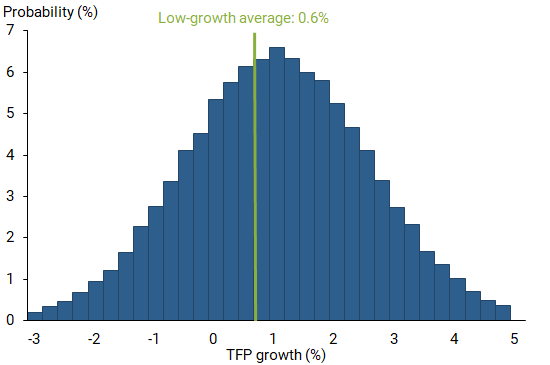 The green line in Figure 3 shows a forecast of 0.6% growth conditional on the economy remaining in the low-growth regime. Relative to this baseline view, the growth forecast shows some probability that we will be in a high-growth regime in 2025, skewing our prediction above that of continued low growth.

Productivity growth has switched between extended periods of higher and lower average growth since 1947. While the economy appears to have settled into a low-growth regime since the mid-2000s, estimates from the end of 2019 suggest it might have started to move toward higher growth. If this proves to be a temporary blip and the low-growth regime continues, we would expect productivity growth to be 0.6% in 2025. However, by taking into account the regime-switching nature of growth, we offer an alternative forecast that average productivity growth could rise to about 1.1% in 2025.

Christian Matthes is an associate professor at Indiana University.

Lily M. Seitelman is a research associate in the Economic Research Department of the Federal Reserve Bank of San Francisco.