Is the Risk of the Lower Bound Reducing Inflation?

U.S. inflation has remained below the Fed’s 2% goal for over 10 years, averaging about 1.5%. One contributing factor may be the impact from a higher probability of future monetary policy being constrained by the effective lower bound on interest rates. Model simulations suggest that this higher risk of hitting the lower bound may lead to lower expectations for future inflation, which in turn reduces inflation compensation for investors. The higher risk may also change household and business spending and pricing behavior. Taken together, these effects contribute to weaker inflation.

The world economy has changed significantly since the global financial crisis of 2007–2008 and the deep global recession it initiated. One notable difference is that central banks have faced substantial difficulties generating inflation, with inflation rates remaining stubbornly below target in several countries. For instance, U.S. inflation has remained below the Federal Reserve’s 2% goal for most of the past 10 years, averaging about 1.5% per year since 2010. A similar pattern has occurred in the euro area and in several other advanced and emerging economies. Financial markets have noticed this change and have been demanding significantly less compensation for possible future inflation than before the crisis.

Accompanying the change in inflation behavior is the fact that interest rates are much lower than 10 years ago, even after adjusting for lower inflation. Among the several factors underlying this decline, population aging and increases in desired saving are particularly significant. All of these elements have also pushed down the so-called neutral rate, the interest rate consistent with sustained price stability and full employment. A lower neutral rate has important implications for the conduct of monetary policy. It implies that, in recessions, policymakers are now more likely to hit the effective lower bound (ELB) of roughly zero as they lower the policy rate. In other words, central banks have less conventional “policy space” than in the past.

In this Economic Letter, we consider the combined effects of these developments in the United States. We propose that the expectation of more frequent encounters with the ELB and the resulting reduction in conventional policy space are lowering inflation expectations by reinforcing several types of precautionary spending and pricing behavior by households and businesses. In turn, more muted inflation expectations translate into weaker inflation, even during normal times when the economy is doing well, as is currently the case. As such, the risk of returning to the ELB complements other factors that could have also contributed to relatively low inflation over the past 10 years, from global production chains to technological improvements and mismeasured economic slack (Belz, Wessel, and Yellen 2019).

Since the mid-2000s, the U.S. government has been issuing real, inflation-protected Treasury securities. These securities are protected against movements in inflation that would otherwise erode the investor’s returns from holding these assets. In contrast, typical nominal Treasury securities do not offer this protection. Investors thus will demand a greater return for holding nominal securities if they expect inflation to rise in the future or if they believe there is a risk that inflation will differ from what they expect. In other words, investors want to be compensated for expected inflation and for inflation risk. 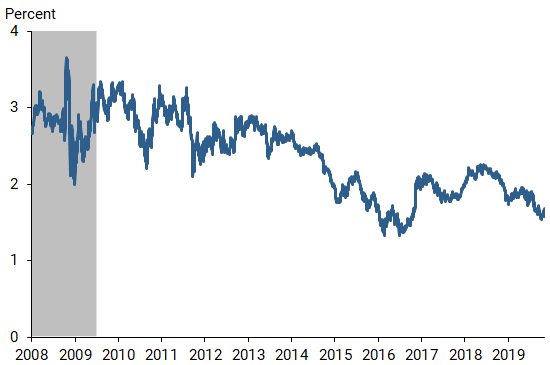 This evidence suggests that financial market participants may be doubting the ability of central banks to achieve their 2% inflation objective in the longer run. One possible reason is that they expect central banks to be more frequently constrained by the ELB in the future, which would reduce their ability to provide monetary stimulus during recessions and presumably result in below-target inflation. While central banks also have unconventional policy tools to stimulate the economy, market participants may doubt their efficacy.

The risk of hitting the effective lower bound

In recent work, we use an economic model to examine how ELB risk affects inflation compensation through its impact on inflation expectations and inflation risk premiums (see Amano, Carter, and Leduc 2019). In line with the recent experiences of industrialized economies, we assume that the ELB binds about 6% of the time (Coibion et al. 2016), though this number is necessarily uncertain. In our framework, we also acknowledge that encounters with the ELB can have significant effects on growth and leave a long-lasting negative effect on the level of GDP, similar to the decline in the level of U.S. real GDP following the Great Recession.

Thus, ELB risk can translate into long-run risk, which investors dislike. As a result, investors require higher returns to compensate for that risk (Bansal and Yaron 2005).

If monetary policymakers are constrained by the ELB in the future, recessions could be deeper and last longer because central banks may be unable to provide sufficient stimulus. The greater decline in economic activity in this case would translate into lower inflation during such downturns relative to recessions when the policy rate is not close to the lower bound.

In addition, greater risk of returning to the ELB could also affect inflation during good times, when the economy is performing well and interest rates are above the lower bound. Investors and households often care about the future when making long-term investment decisions that are difficult to reverse, such as setting up a new production plant or buying a house. The possibility that recessions might be more severe in the future because of the ELB can affect their economic decisions today, prompting them to be more cautious to guard against this risk. For instance, households could start saving more in anticipation of possible harder times ahead. Similarly, businesses could engage in precautionary pricing by setting lower prices today if they anticipate a greater likelihood of deeper recessions in the future and do not review their pricing strategy frequently.

Although we do not directly observe inflation expectations, survey data can provide a useful proxy. For instance, the Survey of Professional Forecasters (SPF) maintained by the Federal Reserve Bank of Philadelphia asks forecasters about their expectations for the inflation rate at different future horizons. Similarly, the University of Michigan also conducts surveys of consumer expectations.

Figure 2 shows that consumer inflation expectations over the next five years have softened since the Great Recession roughly 0.5 percentage point and are now near their historical low point. Long-run inflation expectations from professional forecasters have also weakened somewhat since before the crisis, but the decline is less marked than for consumers. 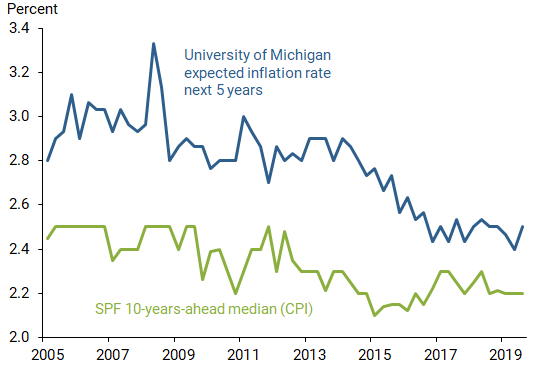 Since the global financial crisis, inflation has remained surprisingly muted in spite of strong labor markets. This Economic Letter examined whether the risk of returning to the effective lower bound for the policy interest rate could have played a role in holding down inflation in the United States. The argument is that the public could be concerned about the risk that policymakers may not be able to provide sufficient policy accommodation in future recessions, which lowers public expectations for future inflation. As a further result, the public takes precautions in their spending and saving behavior to guard against the risk of deeper recessions, which holds down current inflation.

These findings suggest that the puzzle of how to raise inflation to meet central bank goals may require new ways of addressing the risk of returning to the ELB and new ways of understanding how to set and meet inflation goals. The Federal Reserve is conducting a review of its strategies, communications, and tools as one part of its quest to explore solutions to this puzzle.

Robert Amano is senior research director in the Canadian Economic Analysis Department of the Bank of Canada.

Thomas J. Carter is director of international model development in the International Economic Analysis Department of the Bank of Canada.

Belz, Sage, David Wessel, and Janet Yellen. 2019. “What’s (Not) Up with Inflation?” Remarks and summary of event hosted by Hutchins Center on Fiscal and Monetary Policy, Brookings, Washington, DC, October 3.