One potential side effect from the rapid decline of global economic activity since the worldwide pandemic is a reduction in carbon dioxide emissions. Historically, CO2 emissions rise and fall in tandem with economic activity in the short run. Since the industries most affected by the downturn also produce the most CO2, emissions could drop more than output this time around. However, without substantial and sustained changes in energy sources and efficiency, the concentration of CO2 in the atmosphere—the relevant factor causing climate change—will continue on its upward trajectory.

The pandemic has caused unprecedented economic disruptions in addition to claiming many lives. The U.S. unemployment rate rose rapidly to nearly 15% in April, as social-distancing measures led to a collapse in sales and forced businesses to downsize payrolls. Similarly, in March, industrial production suffered its largest setback since 1946. The airline industry was hit particularly hard, as countries imposed travel restrictions and customers avoided confined spaces. As demand for fuels collapsed due to lower use in production and transportation, crude oil prices in Texas even briefly turned negative. Economic activity has also declined rapidly in several other regions of the world.

One implication of this global downturn is a drop in carbon dioxide (CO2) emissions. In this Economic Letter, we review different scenarios for the extent and duration of the drop in emissions and the potential impact on the concentration of CO2 in the atmosphere. We show that CO2 emissions have historically moved one-to-one with economic activity in the short run. However, given the business sectors that have been hardest hit during the current downturn, the decline in emissions may be even more pronounced than suggested by growth forecasts this time around. Moreover, the duration of the downturn and the subsequent emissions rebound will depend in part on the types of stimulus and incentives countries use to rekindle economic activity, in addition to changes in the ability to work remotely (Hepburn et al. 2020). Unless energy efficiency improves substantially, the overall impact on CO2 concentration in the atmosphere, and therefore on climate change dynamics, is likely to be small in the long run.

One way to examine the role of specific factors underlying the growth in CO2 emissions is via the so-called Kaya identity, named after the Japanese energy economist Yoichi Kaya. It simply states that the changes over time in anthropogenic CO2 emissions—that is, those caused by human activity—can be separated into four underlying components: population, real GDP per capita, energy intensity, and carbon intensity. The energy intensity of an economy is the amount of energy needed to produce one unit of real GDP per capita. Similarly, an economy’s carbon intensity is its CO2 emissions per unit of energy used. Researchers often use this relationship to construct alternative long-run scenarios for the growth of emissions, for example in the U.S. Energy Information Administration (2011), and the Intergovernmental Panel on Climate Change (2000).

This relationship is also useful for quantifying the role of each factor in the total change in emissions. The first panel of Figure 1 charts the increase in CO2 emissions over the past 20 years. The second panel reports the cumulative changes in the four underlying components. It shows that increases in GDP and population contributed to the change in CO2 emissions since 2000, while the world’s carbon intensity had a minimal impact overall. In contrast, the world’s energy intensity has declined over the past two decades, which mitigated the rise in emissions shown in the first panel. Thanks to the increased global focus on sustainability and the invention and adaptation of lower-emission technologies, emissions appear to have stabilized since 2013 despite continued economic growth. 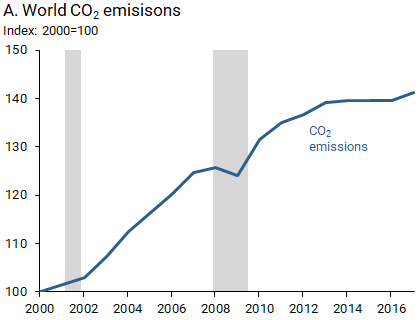 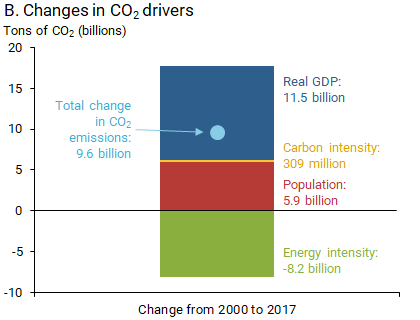 Importantly, the relationship between growth in GDP and emissions in the short term may differ from that in the longer run (Cohen et al. 2017). To focus on the short-run relationship, which is more relevant for the business cycle and current situation, Figure 2 reports the annual rate of growth in GDP and annual emissions for the world. The figure shows a strong positive relationship between these two variables, with a correlation near unity. Even controlling for movements in energy intensity and oil prices, real GDP and emissions growth have moved roughly one-to-one since the early 1970s. Thus, the precipitous worldwide slowdown in industrial activity induced by the pandemic is very likely to translate into an important decline in CO2 emissions. 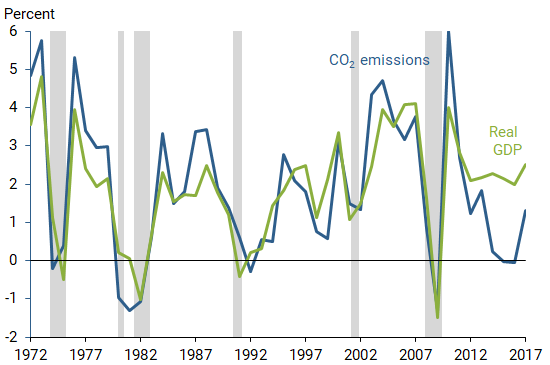 To quantify the potential impact of the economic slowdown on emissions, we combine recent growth forecasts from the Organisation for Economic Co-operation and Development (OECD 2020) with the estimated relationship between world GDP growth and the growth of emissions depicted in Figure 2.

In June, the OECD projected that world real GDP would contract 6% in 2020, assuming a second wave of infections is avoided later this year. This decline in economic activity would therefore translate into a drop in CO2 emissions of about 6%. This substantial drop surpasses the decline experienced during the financial crisis of 2008 and the following Great Recession, when CO2 emissions declined 1.3% and global GDP declined 1.5%. Nonetheless, the large decline in emissions is likely to prove somewhat transitory, given the OECD’s assessment that growth should bounce back in 2021: the growth forecast suggests world emissions should rise nearly 3% next year.

The impact of the current downturn on emissions, however, may be different than the historical empirical pattern would predict. Demand for energy has fallen more during this downturn than in a typical recession, in line with the unprecedented declines in air and surface travel and industrial activity. Lower demand contributed to the collapse in oil prices and steep drop in U.S. coal production. As shown in Figure 3, electricity production, transportation, and industrial activity account for more than 80% of CO2 emissions from fuel combustion, thus the severe impact on these sectors during the pandemic means the effect on emissions could be even larger than expected. 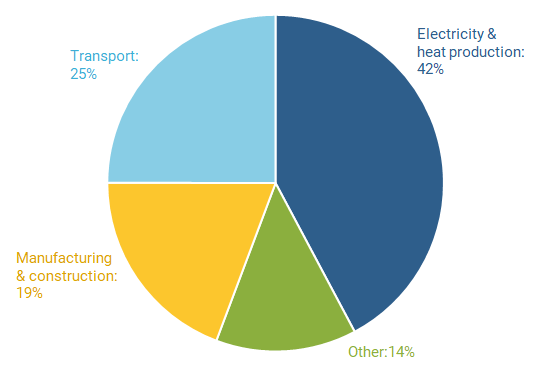 In addition to the uncertain impact of the decline in economic growth on CO2 emissions, the uncertainty around the growth forecast itself is substantially greater than usual. How well the economy performs will largely depend on the evolution of the pandemic, the efficacy of social-distancing measures, the development and availability of treatments and vaccines, and the economic policy responses worldwide, which are clearly difficult to predict. Global economic growth may pick up more slowly than projected. Indeed, recent research on the historical effects of pandemics on economic growth find very persistent negative effects lasting for several years (see Ma, Rogers, and Zhou 2020 and Jordà, Singh, and Taylor 2020).

As such, the fallout from the pandemic is likely to be worse than early projections portray rather than better. For instance, the OECD also considers a scenario in which a second wave of infections occurs later this year. Under this scenario, the OECD expects world GDP to decline 7.6% in 2020 and increase only 2.8% in 2021. In this case, the relationship between growth and emissions suggests that world CO2 emissions would drop nearly 8% in 2020, instead of 6% if a second wave is avoided, and next year’s rebound would be roughly halved. This estimate is in line with the analysis of Le Quéré et al. (2020), who assess the impact of social-distancing measures on high-emission sectors in a set of countries covering 97% of global CO2 emissions. They estimate that emissions could drop 7% in 2020 if some economic restrictions remain in place through the end of the year.

Emissions versus concentration in the atmosphere

The most recent data do not show any slowdown in the rate of growth of CO2 concentration in the atmosphere, despite the decline in emissions (Figure 4). This is consistent with prior experiences. Reductions in CO2 emissions associated with economic downturns, indicated by gray bars in Figure 4, did not alter the overall trend in CO2 concentration in the atmosphere and therefore did little to alter the climate change trajectory. 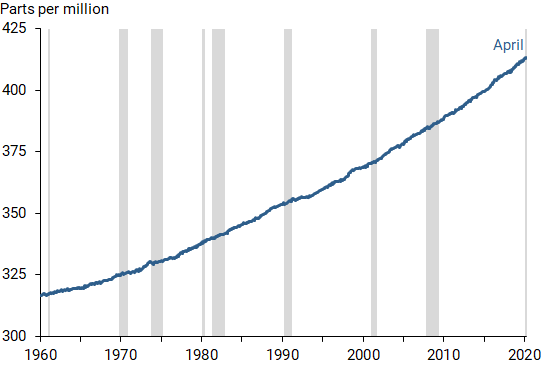 Importantly, the rebound in emissions in 2009 was partly due to increased activity in energy-intensive sectors, such as construction, which benefited from lower oil prices and government fiscal stimulus, particularly in China. Thus, the form of global fiscal relief and incentives for energy efficiency will be important for the magnitude of the rebound in CO2 emissions and the impact on CO2 concentration in the atmosphere. For example, in December 2019 the European Commission unveiled its sustainability plan, which is now viewed as an economic recovery plan for the European Union. The plan focuses economic incentives in sustainable sectors, thus limiting the rebound of greenhouse gas emissions associated with economic recovery. Similarly, the pandemic has led several businesses to introduce or accelerate the adoption of technologies that facilitate remote work. A greater use of telecommuting in the future could contribute to lowering the rebound in CO2 emissions. Hepburn et al. (2020) provide a comprehensive review of policies needed to align the recovery from the current downturn with a sustainable growth path in the future.

In this Economic Letter, we explored the potential impact of the pandemic-driven worldwide economic downturn on CO2 emissions. While CO2 emissions historically move one-to-one with economic activity in the short run, this time around the emissions reduction may exceed the decline implied by current world GDP forecasts. This is because the economic downturn is concentrated in sectors that emit a larger proportion of CO2. In addition, global GDP growth forecasts may prove to be too optimistic given the numerous risks. Moreover, future policies to support the economy may incorporate sustainability goals that reduce emissions further. However, the concentration of CO2 in the atmosphere, which is what ultimately matters for global climate dynamics, will not reverse its upward trend unless there is a substantial and persistent fall in emissions.

Galina Hale is professor of economics at University of California, Santa Cruz, and a research advisor in the Economic Research Department of the Federal Reserve Bank of San Francisco.

Sylvain Leduc is executive vice president and director of the Economic Research Department of the Federal Reserve Bank of San Francisco.

Organisation for Economic Co-operation and Development (OECD). 2020. “The World Economy on a Tightrope.” In OECD Economic Outlook. June.