The growing risk from natural disasters is a key economic effect of climate change. Severe wildfires are a leading example, and they are particularly important for the western states that make up the 12th Federal Reserve District. Analyzing data on wildfire hazard and economic activity confirms that these states are substantially more exposed to wildfire risk than the rest of the country. This gap in regional wildfire risk is likely to grow over time as climate change continues.

Assessing the role of climate change in extreme weather and natural disasters has become increasingly important as the economic toll from such events has grown in recent years (Insurance Information Institute 2019). For example, the last several wildfire seasons in the western United States claimed numerous lives and livelihoods and were accompanied by costly preemptive electrical outages. Expected state and local spending cuts for wildfire prevention and suppression arising from the fiscal effects of the coronavirus crisis are likely to intensify the challenges of wildfire response efforts. Studying the economic impact of natural disasters such as wildfires supports the Federal Reserve Bank of San Francisco’s commitment to better understand climate change risks and their potential impact on our communities (Daly 2019).

In this Economic Letter, we assess wildfire risk in the 12th Federal Reserve District compared with other parts of the country, focusing on the threat to economic activity. We find the 12th District far exceeds other areas in terms of shares of regional output and employment that face substantial risk due to wildfires. Based on expected changes in temperature and annual precipitation patterns associated with climate change, this risk is likely to rise further by 2040.

The 12th District states—Alaska, Arizona, California, Hawaii, Idaho, Nevada, Oregon, Utah, and Washington—are among the country’s most wildfire-prone areas (Insurance Information Institute 2019). Moreover, wildfire activity has increased over time: Jolly et al. (2015) documented that the global mean fire season has lengthened nearly 20% over the past few decades, and Westerling (2016) shows the frequency of large fires in the western United States has risen dramatically since the 1970s, with about 20 additional large fires per decade. The number of fire disasters declared by the Federal Emergency Management Agency has spiked in District states since the late 1990s.

Wildfire risk can be measured across two distinct dimensions, discussed in Thompson et al. (2012). First is wildfire hazard, which is the likelihood that a wildfire will spark and expand in a given area. It depends on several factors, ranging from environmental—like the local climate, topography, vegetation—to human—like wildland management of forest density and urban encroachment.

The second dimension is exposure—the concentration of economic activity in the area where a wildfire burns. While most wildfires entail a suppression cost, some also destroy homes, businesses, and public infrastructure—the foundations of economic activity—causing major disruptions to peoples’ lives. Destruction of this sort may result in lost employment, income, and demand for goods and services, in addition to the human toll and decreased life expectancy. Combining hazard and exposure forms the basis for what this Letter defines as wildfire risk.

Our simple measure of wildfire hazard uses an updated version of the wildfire hazard potential (WHP) index by Dillon et al. (2015). The index captures the potential for a wildfire to ignite that would be difficult for standard firefighting efforts to contain. It simulates thousands of fire seasons to create a highly detailed geographical grid of wildfire hazard covering the contiguous United States; because of this, our data exclude Hawaii and Alaska. WHP reflects the simulated frequency of a large fire igniting, determined from historical weather patterns and topography, and the ensuing intensity, based on characteristics like flame length. Each geographic grid unit is assigned one of five hazard classifications from very low to very high. Figure 1 shows states with more than 10% of acreage in high or very high hazard categories. All contiguous states in the 12th District (blue bars) are included in this group. More than half of the remaining 35 states have less than 2% of acreage in higher risk categories. 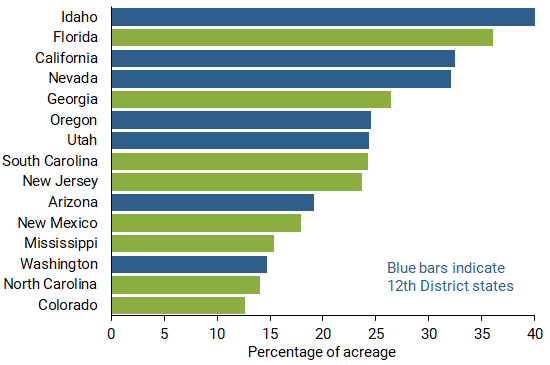 To drill down further, we turn to county-level data, generously provided by authors at the U.S. Forest Service. We simplify the WHP measure into two categories, “elevated” or “mild.” To be categorized as elevated, at least 25% of a county’s acreage must be listed as having high or very high risk; this is in line with the idea that the highest hazard areas should reflect a modest share of the country so firefighting resources can target the most susceptible areas (Dillon et al. 2015). We refer to our resulting binary indicator as WHP25.

Economic activity and wildfires: Now and in the future

Starting with a county’s WHP25 indicator, we incorporate the second dimension of wildfire risk: the relative concentration of economic activity in fire-prone areas. To gauge 12th District risk relative to the rest of the country, we consider economic concentration in terms of the contribution of counties with elevated hazard to their region’s economic output.

After reorganizing Bureau of Economic Analysis (BEA) regional designations to account for contiguous 12th District states, we calculate the share of regional output originating in counties with elevated wildfire hazard as of 2018. The green bars in Figure 2 show that the 12th District has the highest share of exposed output by far at 52%, followed by the Southeast and Rocky Mountain regions at around 25-30%. Similar patterns hold for other measures of economic activity, like earnings, employment, and housing stock; using other thresholds for elevated hazard also gave similar results. In other words, within the 12th District, relatively more people live, work, and contribute to their local economy in areas that are more prone to wildfires. 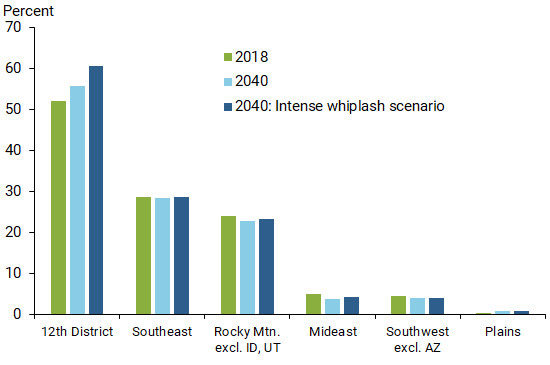 The discrepancy between the 12th District and the rest of the country is likely to be exacerbated as the effects of climate change intensify. Just how much this gap could widen is a complex question. We use a simple forecasting exercise to estimate how regional wildfire risk will change over the next two decades.

To estimate exposed output in 2040, we construct forecasts of GDP and the WHP25 index for the 3,000-plus counties in our sample. We forecast GDP based on each county’s historical growth pattern for 2001-2018 using a quadratic trend. Note that our GDP forecast is based on a trend ending in 2018 and thus does not account for the negative impact of COVID-19.

Our forecast of the WHP25 index in 2040 is designed to incorporate climate change impacts by extrapolating from existing cross-area relationships between average temperatures, precipitation patterns, and wildfire incidence. Specifically, we regress the 2018 WHP25 index on separate measures of same-year county-level estimates of average annual temperature; the number of times in the preceding 20 years that one winter’s rainfall was followed by a winter with at least one standard deviation lower rainfall—our unidirectional measure of “precipitation whiplash”; and region-specific controls. Precipitation whiplash refers to the increasing volatility of wet and dry conditions across years, associated with a changing climate and documented for California in Swain et al. (2018). Preliminary research suggests that wildfire seasons are more intense when unusually wet winters with ensuing dense vegetation growth are followed by dry winters that preserve vegetation as wildfire fuel (Kim and Calhoun 2019). Our regression results indicate that higher temperatures and more frequent precipitation whiplash are associated with higher WHP index values, with statistically significant and quantitatively meaningful coefficients. We combine the resulting regression coefficients with temperature and precipitation forecasts for 2040 from the U.S. Geological Survey’s National Climate Change Viewer (Adler and Hostetler 2018) to construct a WHP index value and our binary hazard indicator for each county in 2040. We call these results our baseline scenario.

The blue bars in Figure 2 show estimates of economic output shares exposed to wildfire hazard across regions in 2040. Our baseline results (light blue bars) suggest that the 12th District’s exposure will rise 4 percentage points over the next two decades relative to other regions. By contrast, we project other regions will see little change or a slight decline in wildfire exposure. These baseline projections reflect more wildfire exposure due to rising temperatures, which are offset somewhat by lower precipitation whiplash in the 12th District. Additionally, our intense whiplash scenario (dark blue bars) predicts wildfire exposure in the 12th District could rise to just over 60%, while other regions will see only modest changes from 2018 shares. In both scenarios, District economic output is likely to remain relatively concentrated in geographic areas with elevated wildfire risk.

How do regional changes in economic exposure to wildfire risk translate to dollar amounts? The portion of real output produced in 12th District counties with elevated exposure increases from $2.1 trillion in 2018 to $4.0 trillion in 2040 in the baseline scenario, and $4.4 trillion in the intense whiplash scenario. The District’s increases in exposed output are an order of magnitude larger than projections for the next most risky region.

These estimates are highly uncertain due to the inherent challenge of projecting economic growth and climate conditions over decades, especially precipitation. Still, our estimates may understate the eventual growth in economic damage from wildfires in fire-prone areas because the WHP index specifically measures the likelihood of large fires igniting. In other words, we don’t include the economic toll of smaller fires in areas with a concentration of homes, businesses, and people.

The 12th District economy is considerably more exposed to wildfire risk than other parts of the country. Not only are wildfires more prevalent within the District, but relatively more people live, work, and contribute to their local economy in areas that are more prone to wildfires. Our analysis suggests that the District’s wildfire risk will intensify over the next two decades as climate change continues. Moreover, beyond wildfire risk to economic activity, increases in adverse health effects and elevated mortality may have even larger repercussions (Burke et al. 2020). Our analysis of wildfire risk is one example of the growing importance of climate change for assessing economic conditions and prospects that may be relevant for Federal Reserve policymaking over the long term (Daly 2019).

James Aylward is an economic analyst in the Economic Research Department of the Federal Reserve Bank of San Francisco.

Luiz E. Oliveira is an associate economist in the Economic Research Department of the Federal Reserve Bank of San Francisco.