While banks seem to face inherent risk from short-term interest rate changes, in practice they structure their balance sheets to avoid exposure to such risk. Nonetheless, recent research finds that banks cannot offload all of the interest rate risk they are naturally exposed to. Historically, banks’ profit margins reflect their compensation for taking on interest rate risk and their stock prices are highly sensitive to changes in interest rates. These findings can help practitioners assess banks’ risk exposures and may have implications for unconventional monetary policy.

Are banks exposed to interest rate risk? The standard economic textbook gives a clear answer to this question: yes, very much so! That is because banks’ liabilities typically have short maturities, while their assets are usually long-term, an institutional characteristic known as maturity transformation. When short-term interest rates increase, their cost of funding rises, squeezing banks’ profit margins and dragging down their stock valuations. Accordingly, banks are highly exposed to the risk of fluctuating short-term interest rates and, therefore, to unexpected changes in monetary policy.

In reality, this longstanding view is not as clear as it might seem. Banks frequently issue longer-term business loans and household mortgages with adjustable rates. Hence, when short-term interest rates rise, so does the interest income on such loans that banks issued in the past. In addition, banks’ costs of funding are sluggish to adjust to short-term rate changes. For example, when the Federal Reserve raises the federal funds rate, the spread between it and bank deposit rates typically widens, such that the increase in banks’ interest expenses is less than the rise in the federal funds rate (see, for example, Drechsler, Savov, and Schnabl 2018). Given these features, bank profit margins may actually increase when the policy rate rises—contrary to the traditional view.

Considering these contradictory predictions, it remains unclear whether banks are, in fact, exposed to interest rate risk. In this Economic Letter, we summarize new evidence on this topic for the United States, building on recent research in Paul (2020).

To start our assessment, we first consider whether bank profit margins have historically reflected compensation for taking on interest rate risk. One way of measuring the compensation for interest rate risk is through the term premium. This reflects the expected premium that bond investors demand for holding a long-term government bond, as opposed to a series of short-term bonds, with potentially varying interest rates. Hence, similar to banks, long-term bond investors get compensated for the risk of fluctuating short-term interest rates. The relevant profit margin for banks is the so-called net interest margin: the difference between banks’ interest income and interest expenses, relative to all interest-earning assets.

Figure 1 gives a visual comparison of an estimated term premium (green line), based on the model by Kim and Wright (2005), and a measure of the net interest margin for U.S. commercial banks (blue line). Since the early 1990s, the two series have followed each other fairly closely, even though they could move around for a number of other reasons that are unrelated to interest rate risk. Over time, both declined steadily, with the net interest margin falling from around 5% at its peak to around 3% by 2015. The decline of the five-year term premium was even larger, falling from around 2% to less than –1%. This comparison highlights that banks’ net interest margins have been falling at the same time as compensation for taking on duration risk has declined over the past three decades. 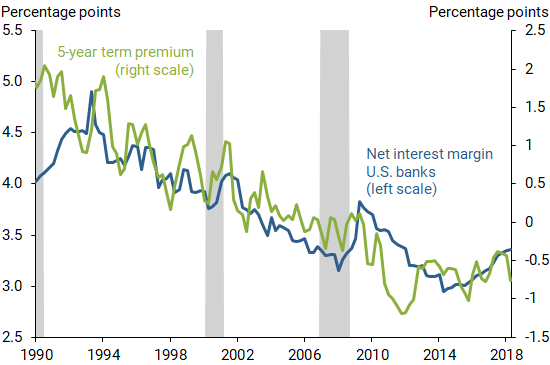 In addition, changes in just the level of interest rates, which also occurred over the sample period, cannot explain the fall in banks’ net interest margins, leaving aside considerations such as a lower bound on interest rates. That is because what matters for banks is not the level per se but the margin between different interest rates.

Another distinction that we take into account is that longer-term government bond yields can either change because of variations in future expected short-term rates or due to a change in the term premium, the risk premium mentioned above. We use the model estimates by Kim and Wright (2005) again to distinguish between these two components and estimate the response of stock prices to each of them. In particular, we consider the responses of the stock return of a benchmark stock index for the banking sector, the KBW Bank Index. The results are shown in Figure 2, with the green line indicating the reaction to a higher term premium at various bond maturities, while the blue line gives the response to an increase in expected future short-term interest rates. 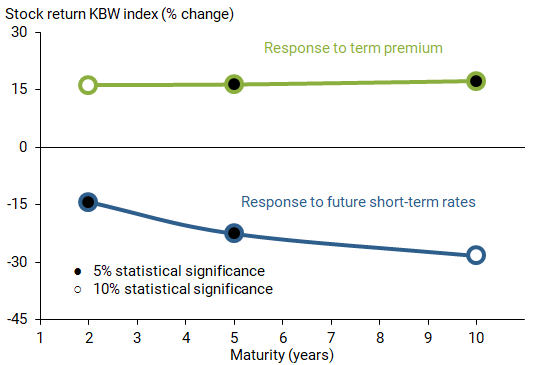 Notes: Estimated responses of the daily stock return of the KBW Bank Index to a 1 percentage point surprise increase in expected future short-term interest rates and the term premium based on estimates from Kim and Wright (2005). Sample: January 1994 to December 2007, excluding FOMC announcement on September 17, 2001. See Paul (2020, Table 4.3.) for details.

The two type of responses are large in absolute terms and statistically significant at standard confidence levels, but they have opposite signs. An increase in future expected short-term interest rates lowers stock returns, suggesting that banks are highly exposed to interest rate risk. In contrast, a higher term premium is associated with rising stock prices, indicating that equity investors value an increase in the compensation for interest rate risk. In addition, Paul (2020) shows that banks are “special,” in the sense that their stock price responses are stronger than responses for nonbank company stocks. Moreover, the responses are also amplified for banks that engage more heavily in maturity transformation. For example, the stock price of a bank with a larger maturity mismatch rises more with an increase in the term premium, which intuitively aligns with the business model of a bank that relies on maturity transformation.

The stock price responses suggest that equity investors expect bank profit margins to change in the future following an unexpected move in long-term bond yields. We test whether that is the case by assessing whether the differential stock price responses we have documented are also reflected in bank profit margins. To this end, we run predictive regressions to estimate how much bank net interest margins respond to surprise changes in future expected short-term rates and the term premium immediately and over the following 10 quarters. The surprise changes in interest rates reflect movements around the time of monetary policy announcements, the data we used earlier; however, we convert these surprise interest rate changes into a quarterly time series to match the frequency of reports on bank profit margins.

The results in Figure 3 show that banks’ net interest margins typically decrease following a surprise increase in the expected path of future short-term rates (Panel A). However, net interest margins increase when the term premium rises unexpectedly (Panel B). The shaded areas around the lines show that these responses are also statistically significant at the 95% confidence intervals. The sign of the responses in these figures line up with the signs of the stock price responses to the two bond yield components shown in Figure 2; this provides further support for the view that the stock price responses reflect changes in expected future earnings. 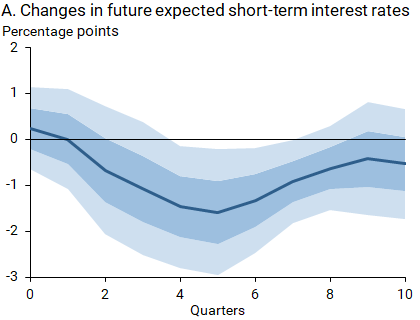 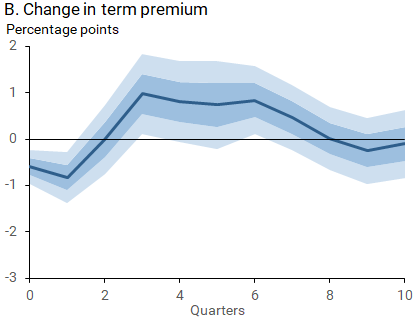 Taken together, our results show that banks are not immune to interest rate risk. Bank profit margins have historically reflected the compensation for taking on interest rate risk, as measured by the term premium, and bank stock prices are highly sensitive to changes in interest rates. So, while banks engage in active risk management to offload interest rate risk to their borrowers and creditors, such a transfer of risk is not perfect.

Simon W. Zhu is a research associate in the Economic Research Department of the Federal Reserve Bank of San Francisco.